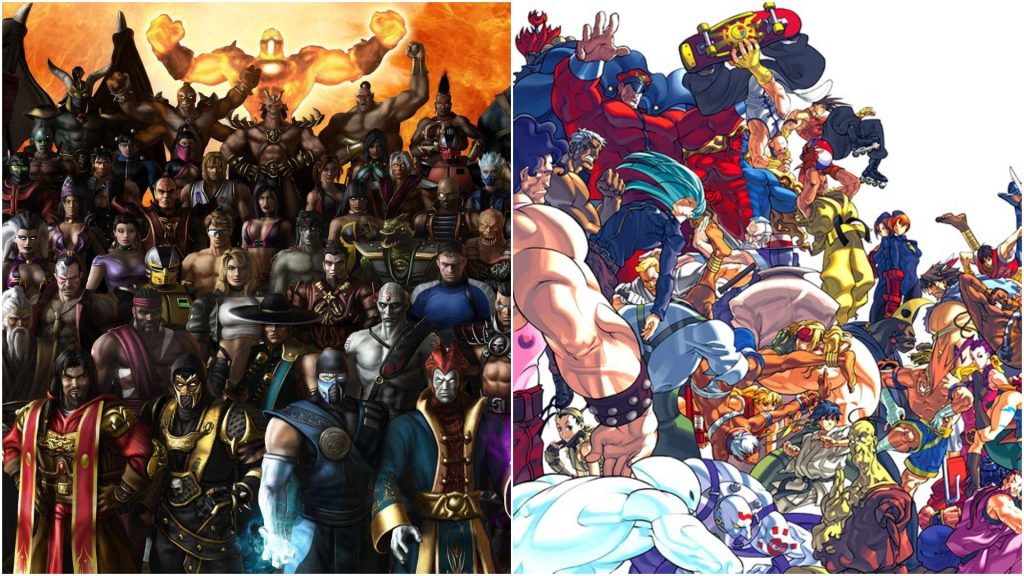 The reveal of the Mortal Kombat movie trailer and news that Street Fighter characters are joining the Fortnite roster has both legendary franchises on the minds of gamers everywhere. So, it’s only natural that fans have also started to compare and contrast the series.

Any of those comparisons have to start with a discussion about the franchises’ rosters. As two of the most notable fighting game franchises ever, it’s no surprise that Street Fighter and Mortal Kombat boast two of the greatest collections of characters in the genre.

Which roster is better, though? Nobody is ever going to write the definitive word on that topic, but if you’re looking for talking points, here are our thoughts on how they compare. 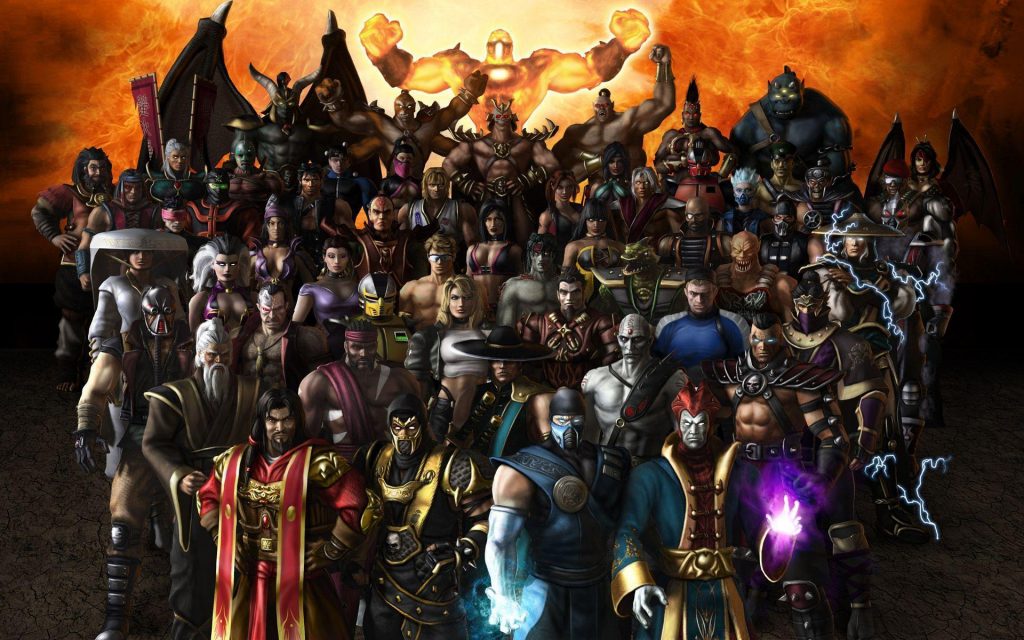 The biggest strength of the Mortal Kombat roster is the story that NetherRealm Studios has crafted over the recent major installments in the franchise.

The idea of a substantial Mortal Kombat story seemed absurd for a franchise (and, frankly, genre) that so often ignores traditional storytelling, but Netherrealm has carefully constructed a compelling narrative that has not only evolved over time but finds a role for most of the series’ major characters. Granted, it’s not much deeper than say the MCU films or the Fast and the Furious franchises, but much like those movies, the games find something wonderful in combining spectacle with more serialized storytelling.

Those serialized spectacles have certainly elevated the Mortal Kombat characters in recent years, but they’re really just an extension of the things that the MK franchise has typically done so well. The MK games’ iconic use of fatalities has ensured that most players latch on to a particular Kombatant in a way that they may not necessarily do in other fighting games. It’s not unreasonable to pick a Mortal Kombat character on the basis of their personality. That’s quite the accomplishment from a storytelling and design perspective.

The Mortal Kombat roster’s star power is unlike anything else in the genre. There’s a reason so many people were able to name so many characters in the recent MK movie trailer even if they’re not big fans of the game.

While recent MK games have emphasized the personality of the franchise’s roster, it’s important to remember that things haven’t always been that way.

There was a long, dark time when MK‘s designers relied on color swaps just to put an expanded roster on the box. They would try to introduce those characters to the franchise via brief backstories, but they usually just made things even more confusing.

There’s a degree to which that problem lives on in the modern MK games. While recent installments have trimmed the roster and done a better job of distinguishing characters, there’s a large chunk of the overall MK roster that remains forgettable. Furthermore, you can kind of tell that the developers are still fighting their reskin urges.

The relatively simple nature of the MK games from a mechanical standpoint also means that fighters are largely defined by their most elaborate moves. It’s nice that even new players can just kind of “pick up” most MK fighters, but the comparative lack of a larger learning curve means that some characters again start to blend together. 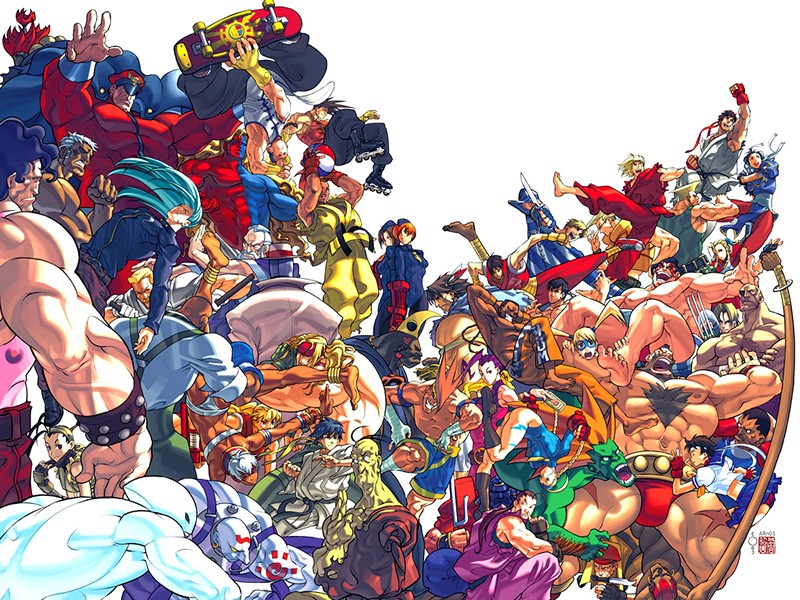 Over the years, the Street Fighter series has become a favorite among genre fans who emphasize the mechanical elements of fighting gameplay. It’s not the most complicated fighting game out there by any means, but it is a series that has managed to maintain most of its roster over the years while evolving many of the characters in ways that stay true to how they began without feeling handicapped by those origins.

There’s a real joy in truly learning a Street Fighter character then growing with them as they grow between installments. You really start to feel like you’re connecting with a character in a way that makes fighting games so appealing in the first place.

The power level of the Street Fighter roster is also fascinating. Along with the “tier list” approach to fighting game characters, you have the ways that the series’ lore establishes the idea of a mythology-friendly power system without nuking the idea that many characters could beat other characters.

The Street Fighter stories have improved over the years, but it’s pretty clear that Capcom just isn’t that interested in telling substantial stories through these games. That’s fine, but their attempts to tell more of a story without really committing to that concept has left many characters feeling like they’re in a holding pattern.

Even if you accept that Capcom isn’t into Tekken or MK levels of direct storytelling, there’s the feeling that they’re missing out on an opportunity to do more with their roster. Many Street Fighter games focus on the stories of a select group of characters, leaving many others fighting for bits of narrative scraps.

It’s fine for fighters to be defined by their fighting, but as real-world fighters from Muhammad Ali to Connor McGregor prove, a little more showmanship can go a long way.

Which Roster is Better?

While the Street Fighter roster is undoubtedly impressive, the improvements made to the Mortal Kombat roster over the years are hard to deny.

By virtue of their star power, growth, abilities, and personal stories, the MK roster feels like the winner here. As for who would win if the major players from both rosters ever got the chance to square off…well, that’s a debate for another day.

The science-fiction horror game, originally released in 2008, was a massive success that influenced an entire generation of games within space/horror genre. Despite the … END_OF_DOCUMENT_TOKEN_TO_BE_REPLACED

After months of speculation regarding the release of an upgraded Switch system, Nintendo finally revealed its latest gaming system — the Nintendo Switch OLED Model. The new Switch will release on October 8, costs $349.99, and offers a long list … END_OF_DOCUMENT_TOKEN_TO_BE_REPLACED

The Legend of Zelda: Breath of the Wild’s critical acclaim is often met with the counter of being “overrated” by some players. There are usually numerous reasons for this – both notable and ridiculous – but one of the … END_OF_DOCUMENT_TOKEN_TO_BE_REPLACED

I remember when I played my first Resident Evil. It was a gift and couldn’t wait to get it running in my old PS1. That old Capcom “this game contains scenes of explicit violence and gore” plastered on the … END_OF_DOCUMENT_TOKEN_TO_BE_REPLACED

At the beginning of one mission, you are marked for dead by the organization you work for. Your handler has no idea what happened but informs you that they are coming for … END_OF_DOCUMENT_TOKEN_TO_BE_REPLACED

If you were to bet me $20 that Amazon would be making an MMORPG at some point, I would still find some reason to not give it to you. Amazon games announced 3 new PC games to try to … END_OF_DOCUMENT_TOKEN_TO_BE_REPLACED

The Legend of Zelda: Breath of the Wild’s critical acclaim is often met with the counter of being “overrated” by some players. There are usually numerous reasons for this – both notable and ridiculous – but one of the … END_OF_DOCUMENT_TOKEN_TO_BE_REPLACED

I don’t play a lot of Apex Legends anymore. I enjoyed the game for a while, but there aren’t many games I’ve stayed with consistently over the long haul since the lost years of World of Warcraft. These days there … END_OF_DOCUMENT_TOKEN_TO_BE_REPLACED

Diehard fans of Call of Duty’s groundbreakingly successful battle royale – Warzone – have been eagerly anticipating the release of a new map for months now. … END_OF_DOCUMENT_TOKEN_TO_BE_REPLACED

While Super Smash Brothers for the Wii U and 3DS has been out for just over a year and the recent announcement of Cloud joining the roster garnering a massive amount of hype, many fans of the fighting game … END_OF_DOCUMENT_TOKEN_TO_BE_REPLACED

I’ll admit that I’ve never been a fan of visual novels. I have nothing against them; it just isn’t a genre I’m interested in. That said, MangaGamer’s announcement a while back that their upcoming Steam release of Kindred Spirits … END_OF_DOCUMENT_TOKEN_TO_BE_REPLACED

Black Shell Media is a multimedia marketing and PR studio specializing in distribution and publishing of indie games! We do a lot of marketing and work with websites, … END_OF_DOCUMENT_TOKEN_TO_BE_REPLACED

Wondering if you can run Halo Infinite on your laptop or desktop? Sure, why not? Halo Infinite has launched in open beta mode (Nov. 16, 2021) and will officially release on Dec. 8, 2021. The game is the sixth in … END_OF_DOCUMENT_TOKEN_TO_BE_REPLACED