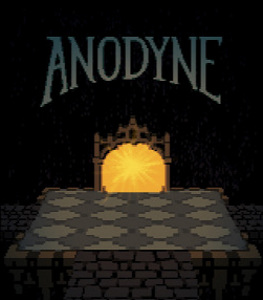 The pure ambiance is the star of the game that I played this week, Anodyne, by indie game creators Sean Hogan and Jonathon Kittaka. In this Zelda-clone you play as Young, a white-haired boy who gets to wander through his own subconscious fighting and exploring the environment with your trusty broom. Sounds a bit crazy, I know, and I was pretty skeptical at first myself but the experience was very rewarding if a bit slow moving.

The best aspect to this whole experience was the sound; in certain games the soundtrack is implemented so well with the rest of the design that it becomes the most prominent feature of the title and this game is a perfect example of this. As I played through the 16-bit levels and dungeons I was immediately reminded of the foreboding feeling I used to get while playing Resident Evil: Directors Cut on my PlayStation, slowly creeping along on the edge of my seat wondering what is coming up around the next corner. Seriously, story aside, this game has a creep-factor that is off the charts. 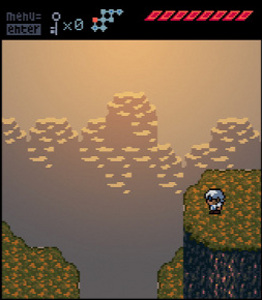 The actual story line felt a bit lacking in my own opinion, it took me a really long time to care about what was going on in Young’s head. It was like a trip through Link’s nightmares while he is lying on the psychologist’s couch back in his “Awakening” days. Difficult to immerse yourself in but grows on you the more time that you spend swinging your broom at enemies and dust piles. The placement of simple puzzles that you have to complete in order to progress through different areas and the story itself were done really well, there was a nice sense of balanced challenges along the way. 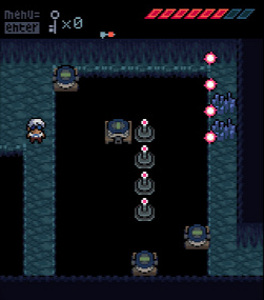 Sticking to the formula of exploration + defeating bad guys + puzzle solving=endgame that the Zelda series popularized, Anodyne tells a story of saving the world through the dreams of one of the world’s inhabitants. There are neat references and quips scattered throughout the game on signs, rocks, and in conversation with NPCs that work to lighten up an otherwise dark narrative and many poke fun at games from a similar time-period and genre. This aspect left a confused imprint on my experience as the sound and level design worked so hard to allow complete immersion and then I would read a rock that said something about me “Talking to a stone because I don’t have any friends,” sometimes the experience was just pure sarcastic nonsense.

Having something to collect or accomplish always helps an environment maintain meaning in a game such as this and it exists here in Anodyne in the form of cards that you must collect to unlock different gates. There are fifty total cards spread all over the various areas and each of the gates that you must open have a number on them that denotes how many cards you need in order to open the gate. This was a neat feature and inspired the player to spend some serious exploration time in the dungeons and the general areas. While this experience will really resonate with fans of the Zelda series, the story is not nearly as engaging as the archetypal rescue-the-princess formula. You will still save the world in Anodyne, it is just a rather deep and depressing trip to see it all the way to the end.

Snowfall is here and it is time to cheer! Sorry about that… As different video games pump out their holiday events, plenty get swept under the radar. If you are tired from playing the multiple FPS holiday events … END_OF_DOCUMENT_TOKEN_TO_BE_REPLACED

Welcome ghouls, beasts, tricksters, and every horrific being known to man. The spooky season is upon us and I figured I would indulge in the festivities in my own way. Thus, I have come up with a satirical take on … END_OF_DOCUMENT_TOKEN_TO_BE_REPLACED

Do so, and you’ll probably find that T END_OF_DOCUMENT_TOKEN_TO_BE_REPLACED

I remember when I played my first Resident Evil. It was a gift and couldn’t wait to get it running in my old PS1. That old Capcom “this game contains scenes of explicit violence and gore” plastered on the … END_OF_DOCUMENT_TOKEN_TO_BE_REPLACED

At the beginning of one mission, you are marked for dead by the organization you work for. Your handler has no idea what happened but informs you that they are coming for … END_OF_DOCUMENT_TOKEN_TO_BE_REPLACED

The history of gaming isn’t that old compared to other artistic and entertainment mediums. Many people have lived through the entirety of video game history, and more people have seen most of it. As such, you’d think that the … END_OF_DOCUMENT_TOKEN_TO_BE_REPLACED

(Updated 4/18/22) Even at a time when it feels like every game is being adapted into a show or movie, the news that Twisted Metal is being turned into a TV series stands out. Why? Well, it probably has … END_OF_DOCUMENT_TOKEN_TO_BE_REPLACED

(Updated 4/15/22) The reveal of the Mortal Kombat movie trailer and news that Street Fighter characters are joining the Fortnite roster has both legendary franchises on the minds of gamers everywhere. So, it’s only natural that fans have also … END_OF_DOCUMENT_TOKEN_TO_BE_REPLACED

While Super Smash Brothers for the Wii U and 3DS has been out for just over a year and the recent announcement of Cloud joining the roster garnering a massive amount of hype, many fans of the fighting game … END_OF_DOCUMENT_TOKEN_TO_BE_REPLACED

I’ll admit that I’ve never been a fan of visual novels. I have nothing against them; it just isn’t a genre I’m interested in. That said, MangaGamer’s announcement a while back that their upcoming Steam release of Kindred Spirits … END_OF_DOCUMENT_TOKEN_TO_BE_REPLACED

Black Shell Media is a multimedia marketing and PR studio specializing in distribution and publishing of indie games! We do a lot of marketing and work with websites, … END_OF_DOCUMENT_TOKEN_TO_BE_REPLACED

Snowfall is here and it is time to cheer! Sorry about that… As different video games pump out their holiday events, plenty get swept under the radar. If you are tired from playing the multiple FPS holiday events … END_OF_DOCUMENT_TOKEN_TO_BE_REPLACED

Amazon Prime members can get free games and free in-game content every month that last a certain amount of time. You can jump over to Amazon to sign-up for an account or navigate to the Prime Gaming section to see … END_OF_DOCUMENT_TOKEN_TO_BE_REPLACED