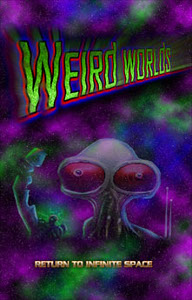 Weird Worlds: Return to Infinite Space is a fun casual space exploration title that captured the hearts of indie gamers everywhere when it was first released for Windows back in 2005. Since that time, we have seen a Mac OS port as well as an iPad port and even discussions of a board-game version that, unfortunately, was never realized. Just recently, the game was finally released on major PC platform Steam to a larger audience than ever before. Independent development studio Digital Eel received accolades for the sound and audio from the 2006 Independent Games Festival, which is and has been for fifteen years now, the who’s who of everything indie gaming. Weird Worlds is the quintessential success story for an indie studio, the game-play is both immersive and fun and the game has been ported successfully to numerous popular platforms that have helped boost exposure for the individual title and Digital Eel.

I picked this game up on Steam for only $7.49 and it’s a great deal at that price. The gameplay is a blend of rogue-activities and space exploration with some space-ship combat to round it all out nicely. You play as a generic space-ship captain that is either rogue or official and you are tasked with an open-ended mission to explore and bring back as much cool alien equipment as you can in ten, twenty, or thirty years depending on which option you choose at the beginning of the game. Simply getting back to the “home” planet within the time frame is part of the challenge as each part of the area you can explore has a certain amount of days that you must devote to travel. The interface is really simple and I can see how this title moved over to touch-screen devices easily, the unexplored part of the universe where the game takes place is all presented in a large flat image format and you simply click on the planet, black hole, or star system that you want to explore in order to move your ship to that spot. Once you are there you can fight with aliens that consider it their territory, trade with peaceful aliens, or even find random equipment on the planet’s surface. There are also opportunities to have other ships join you, so that you have a fleet and not just a single ship which really helps out with combat. You have to be aware of how far out in the unexplored galaxy you are and how long it will take you to get back to home-base because if you only have 100 days left in your mission and you are at a location that is 180 days travel from home, you will end up failing the mission. 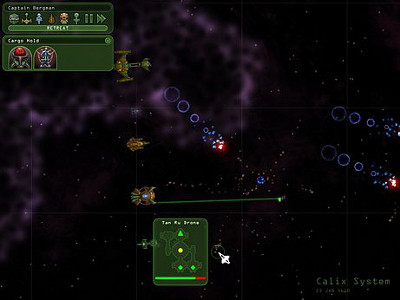 Each time you start a new game, you have the option of three different ships that differ based on their specializations such as military or scientific vessel. The various pieces of equipment that you find have a rough method of classification that consists of small coins shown with the individual equipment images; for instance, a four-coin hull weapon is better than a two-coin weapon. Each of the equipment pieces can be applied to your ship in a real easy drag-and-drop style window in the upper-left of the screen. There are different examples of alien technology that can be used to augment your ship or fleet such as combat shields, weapons, and numerous types of propulsion and hyper-drive engines that will help you to explore more of the universe at a faster rate. I love that fact that each time you play this game, it is a different experience. The universe and everything in it is randomly generated each time so it really feels as if you are exploring an uncharted chunk of alien neighborhood as you try to map out the various places you want to visit. For seven or eight bucks, I definitely endorse playing this neat space-pirate experience; it’s a blast that can be enjoyed at home on your pc or even when you’re on the go with your trusty tablet. Go forth, enjoy your time in procedurally-generated space, but be wary of the Muktians, they are usually not happy with visitors.

Snowfall is here and it is time to cheer! Sorry about that… As different video games pump out their holiday events, plenty get swept under the radar. If you are tired from playing the multiple FPS holiday events … END_OF_DOCUMENT_TOKEN_TO_BE_REPLACED

Welcome ghouls, beasts, tricksters, and every horrific being known to man. The spooky season is upon us and I figured I would indulge in the festivities in my own way. Thus, I have come up with a satirical take on … END_OF_DOCUMENT_TOKEN_TO_BE_REPLACED

Do so, and you’ll probably find that T END_OF_DOCUMENT_TOKEN_TO_BE_REPLACED

I remember when I played my first Resident Evil. It was a gift and couldn’t wait to get it running in my old PS1. That old Capcom “this game contains scenes of explicit violence and gore” plastered on the … END_OF_DOCUMENT_TOKEN_TO_BE_REPLACED

At the beginning of one mission, you are marked for dead by the organization you work for. Your handler has no idea what happened but informs you that they are coming for … END_OF_DOCUMENT_TOKEN_TO_BE_REPLACED

The history of gaming isn’t that old compared to other artistic and entertainment mediums. Many people have lived through the entirety of video game history, and more people have seen most of it. As such, you’d think that the … END_OF_DOCUMENT_TOKEN_TO_BE_REPLACED

(Updated 4/18/22) Even at a time when it feels like every game is being adapted into a show or movie, the news that Twisted Metal is being turned into a TV series stands out. Why? Well, it probably has … END_OF_DOCUMENT_TOKEN_TO_BE_REPLACED

(Updated 4/15/22) The reveal of the Mortal Kombat movie trailer and news that Street Fighter characters are joining the Fortnite roster has both legendary franchises on the minds of gamers everywhere. So, it’s only natural that fans have also … END_OF_DOCUMENT_TOKEN_TO_BE_REPLACED

While Super Smash Brothers for the Wii U and 3DS has been out for just over a year and the recent announcement of Cloud joining the roster garnering a massive amount of hype, many fans of the fighting game … END_OF_DOCUMENT_TOKEN_TO_BE_REPLACED

I’ll admit that I’ve never been a fan of visual novels. I have nothing against them; it just isn’t a genre I’m interested in. That said, MangaGamer’s announcement a while back that their upcoming Steam release of Kindred Spirits … END_OF_DOCUMENT_TOKEN_TO_BE_REPLACED

Black Shell Media is a multimedia marketing and PR studio specializing in distribution and publishing of indie games! We do a lot of marketing and work with websites, … END_OF_DOCUMENT_TOKEN_TO_BE_REPLACED

Snowfall is here and it is time to cheer! Sorry about that… As different video games pump out their holiday events, plenty get swept under the radar. If you are tired from playing the multiple FPS holiday events … END_OF_DOCUMENT_TOKEN_TO_BE_REPLACED

Amazon Prime members can get free games and free in-game content every month that last a certain amount of time. You can jump over to Amazon to sign-up for an account or navigate to the Prime Gaming section to see … END_OF_DOCUMENT_TOKEN_TO_BE_REPLACED