Poker Night 2: The Other Side of Telltale

Telltale has made recent fame with their groundbreaking Walking Dead episodic game series. While this made waves last year, and another release in the series plans to do the same this year, their second release in the Poker Night series has gone overlooked.

Poker Night is a series made by Telltale games that focuses on standard poker play but with the added flavor of known-character dialogue. It strings in existing characters from multiple games/movies/shows in an attempt to form a cohesively entertaining experience, unlike any other poker game you’ve played to date.

I got my hands on the first Poker Night at PAX 10 in Seattle. A few of the game’s designers were sitting at the studio’s booth eating chips and drinking coke while signing free posters. I got a poster, of course, but I also got to have a quick chat with them.

Poker Night wasn’t getting very much attention at the Expo that year, and the team may have felt a little deflated about that. When I started asking about the game they absolutely lit up.  They started going on and on about their acquired rights for characters and how they planned on bringing a progressive story and feeling to your dealings with said characters.

I’ve had my eye on Telltale ever since.

After the first Poker Night released I bought it instantly. I enjoyed the game for about a day or two but quickly realized that there wasn’t much more to it than playing poker with some witty lines strung in.

It failed to really bring me into the world and while the dialogue was entertaining it had seemed like I had exhausted the majority of it with a few tournaments.

Enter Poker Night 2, the next installation featuring new characters and matching dialogue. To replace the old cast they brought in Sam (Sam and Max), Claptrap (Borderlands), Brock Samson (Venture Bros.) and Ash Williams (Evil Dead). The largest addition however is GLaDOS (Portal series) who acts as the game’s dealer. 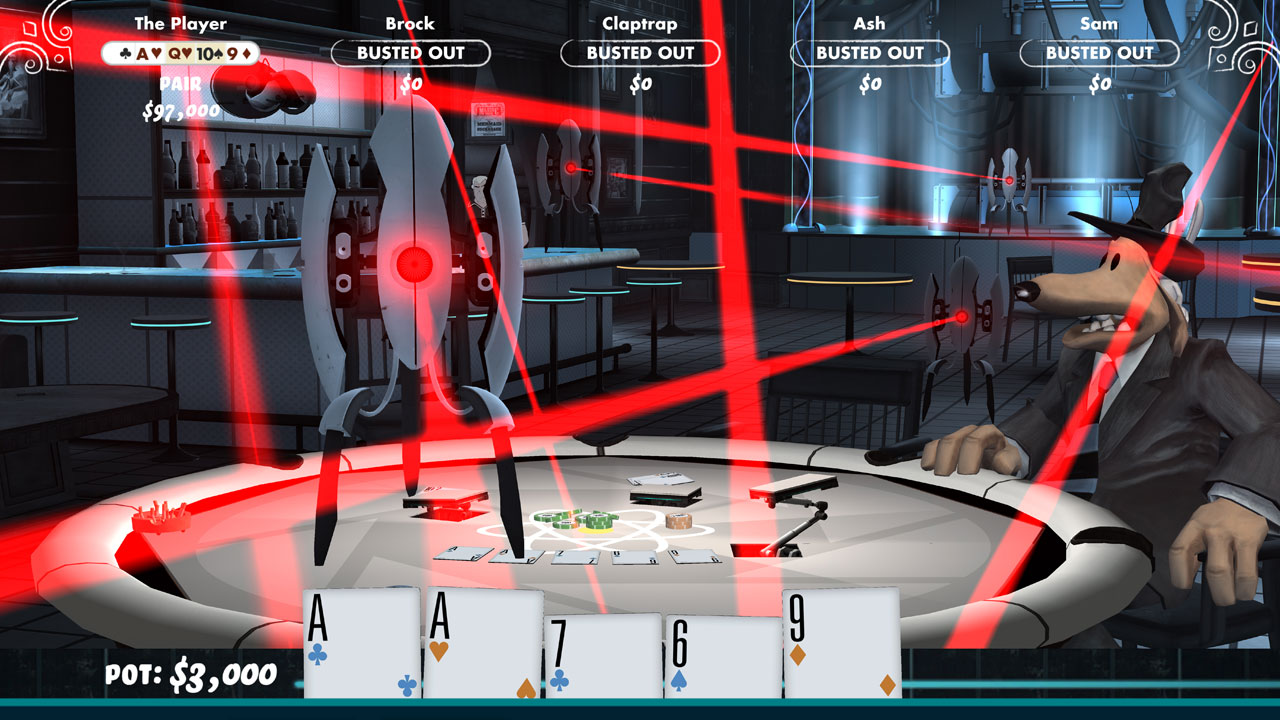 The core of the game remains intact from the first game in the series but it makes some magnificent strides with its use of the characters. They really go above and beyond with what they’re given, in terms of interactions, and it’s cool to see some of these characters react to each others’ existences. At one point the characters got in a large-scale discussion about how Claptrap can even properly function on one wheel.

My favorite character that they added is Claptrap. He has great dialogue with every character on the table and even invites a Psycho to hang out in the background when he loses. I also don’t watch Venture Bros., was never a huge fan of Evil Dead, and found that replacing Max (who was in the first Poker Night) with Sam was a little underwhelming. 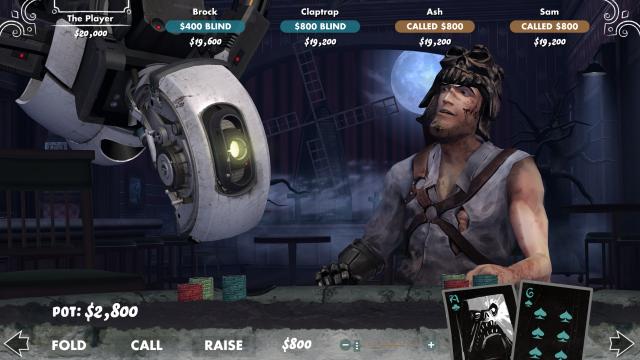 Every character has a unique play style which can become predictable. It’s nice to see that their personalities shine through in their play, just like mine does, but from a game design point of view it might seem a little shallow.

You can choose different game styles and buy new cards, tokens and felt for the table. You can make the game experience pretty much anything you want to, as long as you’re still playing poker. 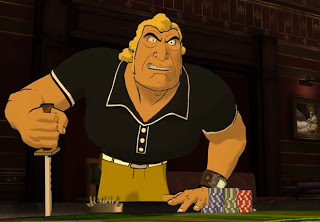 At the end of the day that’s really the only flaw that exists with this game, and any other following entries in the series: it’s a poker game.

I love poker. I used to play every week with my roommates in university. It’s tough to justify a poker game that doesn’t cost you real money however because the thrill is somewhat nonexistent. You may get a slight rush when you click “all in” but when you lose there’s not really any deep-seeded rage or longing for that money you lost. That massive gambling crowd that would eat a game like this up doesn’t want to risk nothing. They play poker because of the rush, which the Poker Night series may forever miss until they get online gambling involved.

With that being said if you DO want a harmless game of poker to play then Poker Night 2 is a solid pick up. It really is the only high-end poker game that doesn’t require real money, and it’s got some charm to boot. 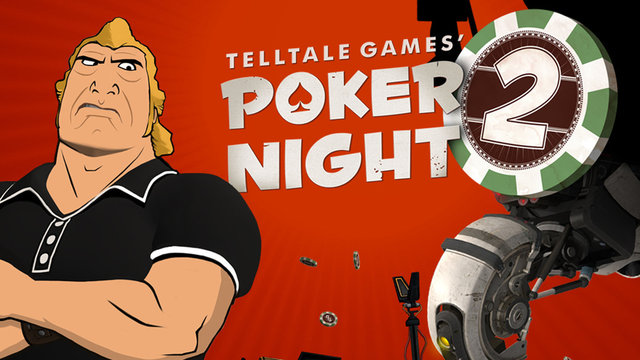 Hotline Miami 2 Gets a Trailer

In 2020 it was revealed developer IO Interactive was working on a James Bond game known as Project 007 which, understandably, shook the video game world. Still in production, there’s a possibility that their James Bond game could be the … END_OF_DOCUMENT_TOKEN_TO_BE_REPLACED

The history of gaming isn’t that old compared to other artistic and entertainment mediums. Many people have lived through the entirety of video game history, and more people have seen most of it. As such, you’d think that the … END_OF_DOCUMENT_TOKEN_TO_BE_REPLACED

30+ years on, there’s somehow nothing quite like an NES action game. From the soundtracks to the level design and airtight mechanics, classic NES games like Ninja Gaiden and Mega Man remain some of the absolute best the medium … END_OF_DOCUMENT_TOKEN_TO_BE_REPLACED

Do so, and you’ll probably find that T END_OF_DOCUMENT_TOKEN_TO_BE_REPLACED

I remember when I played my first Resident Evil. It was a gift and couldn’t wait to get it running in my old PS1. That old Capcom “this game contains scenes of explicit violence and gore” plastered on the … END_OF_DOCUMENT_TOKEN_TO_BE_REPLACED

At the beginning of one mission, you are marked for dead by the organization you work for. Your handler has no idea what happened but informs you that they are coming for … END_OF_DOCUMENT_TOKEN_TO_BE_REPLACED

The history of gaming isn’t that old compared to other artistic and entertainment mediums. Many people have lived through the entirety of video game history, and more people have seen most of it. As such, you’d think that the … END_OF_DOCUMENT_TOKEN_TO_BE_REPLACED

(Updated 4/18/22) Even at a time when it feels like every game is being adapted into a show or movie, the news that Twisted Metal is being turned into a TV series stands out. Why? Well, it probably has … END_OF_DOCUMENT_TOKEN_TO_BE_REPLACED

(Updated 4/15/22) The reveal of the Mortal Kombat movie trailer and news that Street Fighter characters are joining the Fortnite roster has both legendary franchises on the minds of gamers everywhere. So, it’s only natural that fans have also … END_OF_DOCUMENT_TOKEN_TO_BE_REPLACED

While Super Smash Brothers for the Wii U and 3DS has been out for just over a year and the recent announcement of Cloud joining the roster garnering a massive amount of hype, many fans of the fighting game … END_OF_DOCUMENT_TOKEN_TO_BE_REPLACED

I’ll admit that I’ve never been a fan of visual novels. I have nothing against them; it just isn’t a genre I’m interested in. That said, MangaGamer’s announcement a while back that their upcoming Steam release of Kindred Spirits … END_OF_DOCUMENT_TOKEN_TO_BE_REPLACED

Black Shell Media is a multimedia marketing and PR studio specializing in distribution and publishing of indie games! We do a lot of marketing and work with websites, … END_OF_DOCUMENT_TOKEN_TO_BE_REPLACED

The month of October is here, and the spooky festivities are starting. However, it is still key to be aware of the other important events happening around this time of the year. For example, October is Breast Cancer Awareness month. … END_OF_DOCUMENT_TOKEN_TO_BE_REPLACED