Towerfall is a local multiplayer archer game that pits players against each other using some clever and simplistic mechanics that make for an incredibly cohesive experience.

I wrote an article previewing Towerfall for everyone some time ago after the reveal that it was going to launch as an Ouya exclusive. For how long it’s going to remain one is up in the air to the public but I’m almost certain that Matt Thorson, the game’s creator, is already working on plans to move it onto Xbox and Playstation. Why wouldn’t he?

Towerfall is the epitome of the couch-multiplayer experience.

The mechanics and controls are extremely simple, allowing for an almost invisible barrier to entry. You move and aim with the same joy stick and you jump and shoot with two other buttons. When you get deeper into the experience dodging becomes essential as it allows you to catch incoming arrows and to traverse the maps easier.

There are many subtle mechanics that are taught through the game’s tips that appear after matches or time trials. These are actually incredibly useful and since I’ve noticed them I’m been playing the game with far more tact that before.

Little things like losing your hood/hat or crown when an arrow skims your head make the game feel pretty damn polished.

As you boot up the game you’ll hear the epic soundtrack that’s sure to lure you into the game. Although there’s no story to the game the narrative is created between you and your friends (soon to be dubbed ‘frenemies’) while you play. As you play the game has a magical way of getting you to squirm, kick, and often shout obscenities. It’s a level of competition that seems to have been missing from what people consider “multiplayer” for the last few years.

Although the last game to invoke this sort of reaction in me was actually very recent (Battleblock Theatre) this experience is still shocking to the system in the best way possible. I’m so used to games (League of Legends or Halo for example) that place the person I’m yelling at on another side of the city/country/continent/globe. It’s incredibly satisfying to be playing a game that lets me yell at my friends like I used to enjoy so thoroughly. 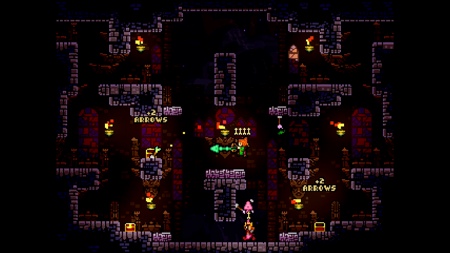 The music to Towerfall is a revelation and Alec Holowka has brought the game play to life. Every tower has its own song but most of them are variations on the main theme and it helps bring them all together as one experience. The sound effects are just as brilliant and are just cute enough to piss you off when someone kills you.

The art is just as fantastic and it’s a massive improvement on the game’s original art that featured four fat Link-like characters of varying colours. While I actually enjoyed the original art each character has their own look now and each of them feel unique. I find that I actually play more aggressively as one character over another because I’m considering how that vague character template might actually compete.

I’ve noticed that two of the four characters in the game are female and this is in no way flaunted like it’s making a statement. It proves that men and women can be put in games together and it doesn’t need to be blown up into a battle of the sexes. It’s another subtle thing that Towerfall does excellently and I love it. 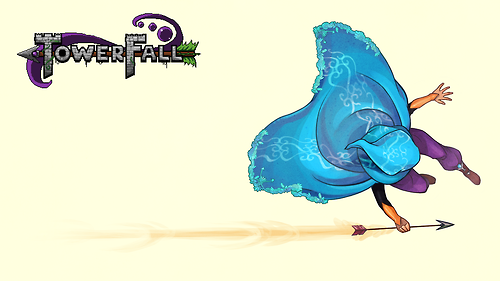 The game’s drops and power-ups all feel unique to the game and they all fit perfectly with the gameplay and pacing. Lava walls will prevent devious players from using the wrapping edges of the maps to their advantage, and darkness will make all platforms and crouching players practically invisible.

There’s unique arrow types that change the pacing of the gameplay constantly as you and your opponents pick them up. Bramble arrows are especially unique and will place deadly thorns on walls/character that they come into contact with, making that terrain impassable.

OUYA to offer $1M matching funds to developers on Kickstarter

(Updated 4/18/22) Even at a time when it feels like every game is being adapted into a show or movie, the news that Twisted Metal is being turned into a TV series stands out. Why? Well, it probably has … END_OF_DOCUMENT_TOKEN_TO_BE_REPLACED

(Updated 4/15/22) The reveal of the Mortal Kombat movie trailer and news that Street Fighter characters are joining the Fortnite roster has both legendary franchises on the minds of gamers everywhere. So, it’s only natural that fans have also … END_OF_DOCUMENT_TOKEN_TO_BE_REPLACED

Do so, and you’ll probably find that T END_OF_DOCUMENT_TOKEN_TO_BE_REPLACED

Do so, and you’ll probably find that T END_OF_DOCUMENT_TOKEN_TO_BE_REPLACED

I remember when I played my first Resident Evil. It was a gift and couldn’t wait to get it running in my old PS1. That old Capcom “this game contains scenes of explicit violence and gore” plastered on the … END_OF_DOCUMENT_TOKEN_TO_BE_REPLACED

At the beginning of one mission, you are marked for dead by the organization you work for. Your handler has no idea what happened but informs you that they are coming for … END_OF_DOCUMENT_TOKEN_TO_BE_REPLACED

(Updated 4/18/22) Even at a time when it feels like every game is being adapted into a show or movie, the news that Twisted Metal is being turned into a TV series stands out. Why? Well, it probably has … END_OF_DOCUMENT_TOKEN_TO_BE_REPLACED

(Updated 4/15/22) The reveal of the Mortal Kombat movie trailer and news that Street Fighter characters are joining the Fortnite roster has both legendary franchises on the minds of gamers everywhere. So, it’s only natural that fans have also … END_OF_DOCUMENT_TOKEN_TO_BE_REPLACED

The Legend of Zelda: Breath of the Wild’s critical acclaim is often met with the counter of being “overrated” by some players. There are usually numerous reasons for this – both notable and ridiculous – but one of the … END_OF_DOCUMENT_TOKEN_TO_BE_REPLACED

While Super Smash Brothers for the Wii U and 3DS has been out for just over a year and the recent announcement of Cloud joining the roster garnering a massive amount of hype, many fans of the fighting game … END_OF_DOCUMENT_TOKEN_TO_BE_REPLACED

I’ll admit that I’ve never been a fan of visual novels. I have nothing against them; it just isn’t a genre I’m interested in. That said, MangaGamer’s announcement a while back that their upcoming Steam release of Kindred Spirits … END_OF_DOCUMENT_TOKEN_TO_BE_REPLACED

Black Shell Media is a multimedia marketing and PR studio specializing in distribution and publishing of indie games! We do a lot of marketing and work with websites, … END_OF_DOCUMENT_TOKEN_TO_BE_REPLACED