Red’s lack of choice explores concept of agency in Transistor 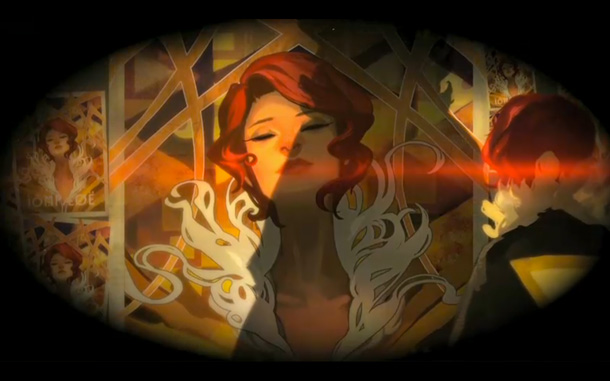 Readers beware this post and the articles I link to contain spoilers for the game Transistor, if you haven’t played it yet go do it!  Moving on…

Recently, while preparing for an interview with Supergiant Games Darren Korb and Ashley Barrett I came across an analysis of Transistor written by freelance writer Nissacam.  Nissa pointed out several aspects of the game and dug heavily into the lyrics of Transistor’s soundtrack to support her analysis that the game was an exploration of agency.

Nissa did a pretty fantastic job of piecing through the songs “In Circles,” “We All Become,” and “Paper Boats,” to help support her interpretation.  The problem then was finding how the songs, “The Spine,” and “Signals,” fit into this reading.  What I found surprised me and offered an understanding that not only is Transistor an exploration of agency, but that Red herself seems somewhat aware that she is a character in a game.

Themselves in knots around the heart

It beats in time

The placement of this song within Transistor’s opening minutes as Red stares at posters of herself plastered on a city wall is telling.  This song isn’t describing the enemy encountered later in the game like the title of the song might suggest, but is actually how Red sees herself.

I know it’s mine,

She understands the inner workings, or spine, of the world she is inhabiting, which, I suggest is not necessarily Cloudbank, but refers instead to the constructed world of the game itself.  This changes in the next chorus line and persists throughout the rest of the song.

You know it’s mine,

The shift to “you” suggests that Red speaks directly to her audience, the players.  This idea of Red acknowledging her position as a construct doomed to repeat the same cycle starts to make more sense within the lyrics of “Signals.”

Step out beyond the edge and start the motion

Look out below, I know there’s no decision

Red actively calls out the audience, and developers, by acknowledging that she has no capabilities of causing change in this world.  This idea comes to its ultimate fruition in the ending as Red appears to take her own life despite the fact that she is granted the power to remake Cloudbank.  She was already conscious of the fact that nothing can change this world anyway, and that she was destined to return to her lover from the start.   If there was any question left that Red knew she was without actual agency look no further than the very next stanza.

Too late for me, no reason to recover

If I should choose to rise I’m still descending

The part that makes Red’s realization chilling comes later in the song.  Despite knowing that she has no control over her actions or the world she inhabits, she still defiantly declares that she does have choice and wants no part of the system she is trapped in.

I won’t become a number in the system

While she doesn’t truly have choice, she is given the appearance of choice by fulfilling actions that counteract the wishes of other characters, or in the case of the ending, what most players would expect or desire.

The beauty of a game like Transistor is that it opens itself up to many interpretations with the level of detail given to each aspect of the game.  The same evidence given here could be used to support a wholly different claim given the right context.  With further research who knows what sort of hidden meanings could be subtlety implanted within the narrative.  While I feel like I’ve answered this question suitably enough for me, I’m still left with many.

Like why during Sybil’s fight does she begin singing “In Circles” in place of Red?  Or why do we never see the Transistors face and what could his jackets insignia refer to?  In the end, that might also be part of the point.  To quote “In Circles.”

It’s not when you get there, it’s always the climb.

(Updated 4/18/22) Even at a time when it feels like every game is being adapted into a show or movie, the news that Twisted Metal is being turned into a TV series stands out. Why? Well, it probably has … END_OF_DOCUMENT_TOKEN_TO_BE_REPLACED

(Updated 4/15/22) The reveal of the Mortal Kombat movie trailer and news that Street Fighter characters are joining the Fortnite roster has both legendary franchises on the minds of gamers everywhere. So, it’s only natural that fans have also … END_OF_DOCUMENT_TOKEN_TO_BE_REPLACED

Do so, and you’ll probably find that T END_OF_DOCUMENT_TOKEN_TO_BE_REPLACED

Do so, and you’ll probably find that T END_OF_DOCUMENT_TOKEN_TO_BE_REPLACED

I remember when I played my first Resident Evil. It was a gift and couldn’t wait to get it running in my old PS1. That old Capcom “this game contains scenes of explicit violence and gore” plastered on the … END_OF_DOCUMENT_TOKEN_TO_BE_REPLACED

At the beginning of one mission, you are marked for dead by the organization you work for. Your handler has no idea what happened but informs you that they are coming for … END_OF_DOCUMENT_TOKEN_TO_BE_REPLACED

(Updated 4/18/22) Even at a time when it feels like every game is being adapted into a show or movie, the news that Twisted Metal is being turned into a TV series stands out. Why? Well, it probably has … END_OF_DOCUMENT_TOKEN_TO_BE_REPLACED

(Updated 4/15/22) The reveal of the Mortal Kombat movie trailer and news that Street Fighter characters are joining the Fortnite roster has both legendary franchises on the minds of gamers everywhere. So, it’s only natural that fans have also … END_OF_DOCUMENT_TOKEN_TO_BE_REPLACED

The Legend of Zelda: Breath of the Wild’s critical acclaim is often met with the counter of being “overrated” by some players. There are usually numerous reasons for this – both notable and ridiculous – but one of the … END_OF_DOCUMENT_TOKEN_TO_BE_REPLACED

While Super Smash Brothers for the Wii U and 3DS has been out for just over a year and the recent announcement of Cloud joining the roster garnering a massive amount of hype, many fans of the fighting game … END_OF_DOCUMENT_TOKEN_TO_BE_REPLACED

I’ll admit that I’ve never been a fan of visual novels. I have nothing against them; it just isn’t a genre I’m interested in. That said, MangaGamer’s announcement a while back that their upcoming Steam release of Kindred Spirits … END_OF_DOCUMENT_TOKEN_TO_BE_REPLACED

Black Shell Media is a multimedia marketing and PR studio specializing in distribution and publishing of indie games! We do a lot of marketing and work with websites, … END_OF_DOCUMENT_TOKEN_TO_BE_REPLACED