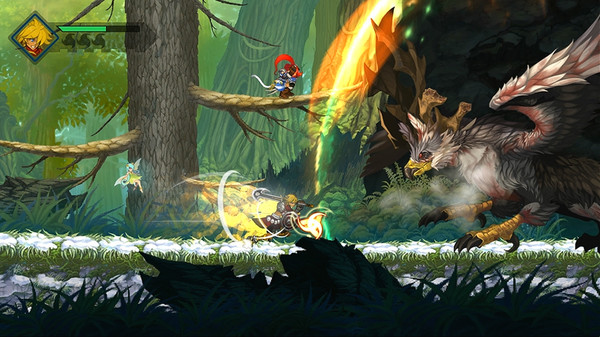 After a fairly lengthy hiatus I’m back with the first round of new indie release highlights of 2017. Releases have been pretty light over the last few weeks (hence the hiatus) but I still managed to scrounge up a list of recent games that may have slipped under your radar.

First up we have Shantae: Half-Genie Hero, the fourth title in this popular series of retro-inspired Metroidvania platformers. This time around the series has dropped its traditional pixel art graphics in favor of clean and colorful HD animation. Classic characters and abilities make a return alongside plenty of new additions, including a Relic System that allows you to customize Shantae’s moves to fit your play style. You can also find Half-Genie Hero on PS4, Vita, Xbox One, and Wii U.

Another noteworthy release is Rise & Shine, the latest indie game to be released under Adult Swim’s publishing division. You play as a boy named Rise, who with the help of his sentient gun Shine, must save the once-peaceful world of Gamearth from an invasion by the bombastic and over budgeted forces of Nexgen. The game blends elements of traditional puzzle-platforming with fast and challenging bullet hell combat across its various game-themed, hand drawn levels. Also available on Xbox One.

8-Bit Invaders is the latest stand-alone installment to Petroglyph’s ongoing series of RTS games. As with the previous two 8-Bit games, Invaders is heavily inspired by RTS classics like Command & Conquer and features fully destructible voxel environments. The game introduces two new sci-fi races, both of which can be used against the other factions from the previous games. In addition to the 24 mission campaign, 8-Bit Invaders also includes 10 co-op missions, multiplayer, and a new Conquer The Multiverse strategic metagame. Also available on GOG.

Reconquest is another recent RTS that wears its C&C inspirations on its sleeve, though its reception has been far more mixed. Reconquest is set in the aftermath of WWIII, and involves two factions battling for control of Earth’s remaining resources. While the game seems promising, its apparently quite rough at the moment, with a fairly limited amount of content and various issues with the UI and core mechanics. It looks like it might be worth checking out after a few more updates, though.

HoPiKo has been described as a really fast version of the barrel chains in Donkey Kong Country. The game is all about perfectly timing your jumps as you rocket around hundreds of levels at insane speeds. The levels are short and designed to appeal to speed runners looking beat each level in the fastest, most efficient way possible. You can also find HoPiKo on iOS, PS4, and Xbox One.

99Vidas is a 16-bit love letter to classic 2D brawlers from the ’80s and ’90s. The game currently features 11 playable characters, each with their own unique set of upgradable combos and abilities. There are six full stages and two bonus stages so far, with the promise of more in the future. You can play 99Vidas alone or with up to three friends in both local and online multiplayer.

The cult classic Alien Shooter series is back with a tower defense spin-off. Defend you positions against an onslaught of hundreds of alien creatures per level with your squad of elite soldiers. There are seven classes of soldiers in all, each with their own specializations and customizable loadout of weapons. In an interesting twist for the TD genre, each of your “towers” have limited ammo and must be resupplied during combat. You also have a variety of support powers to help fight the alien horde, like mines and drones.

Finally we come to Heroine Anthem Zero, the third game in the Heroine Anthem series and the first to get an official English translation. This 2D action RPG is inspired by Norse mythology, but viewed through an anime lens. Character progression is tied more closely to your weapons and gear than your stats, and your weapons also have uses outside of combat when it comes to solving the game’s various environmental puzzles. Be aware that this is only the first chapter of the game, with the rest being released episodically in the future.

That’s all for this week. I’ll be back soon with more indie release highlights.

Snowfall is here and it is time to cheer! Sorry about that… As different video games pump out their holiday events, plenty get swept under the radar. If you are tired from playing the multiple FPS holiday events … END_OF_DOCUMENT_TOKEN_TO_BE_REPLACED

Welcome ghouls, beasts, tricksters, and every horrific being known to man. The spooky season is upon us and I figured I would indulge in the festivities in my own way. Thus, I have come up with a satirical take on … END_OF_DOCUMENT_TOKEN_TO_BE_REPLACED

Do so, and you’ll probably find that T END_OF_DOCUMENT_TOKEN_TO_BE_REPLACED

I remember when I played my first Resident Evil. It was a gift and couldn’t wait to get it running in my old PS1. That old Capcom “this game contains scenes of explicit violence and gore” plastered on the … END_OF_DOCUMENT_TOKEN_TO_BE_REPLACED

At the beginning of one mission, you are marked for dead by the organization you work for. Your handler has no idea what happened but informs you that they are coming for … END_OF_DOCUMENT_TOKEN_TO_BE_REPLACED

The history of gaming isn’t that old compared to other artistic and entertainment mediums. Many people have lived through the entirety of video game history, and more people have seen most of it. As such, you’d think that the … END_OF_DOCUMENT_TOKEN_TO_BE_REPLACED

(Updated 4/18/22) Even at a time when it feels like every game is being adapted into a show or movie, the news that Twisted Metal is being turned into a TV series stands out. Why? Well, it probably has … END_OF_DOCUMENT_TOKEN_TO_BE_REPLACED

(Updated 4/15/22) The reveal of the Mortal Kombat movie trailer and news that Street Fighter characters are joining the Fortnite roster has both legendary franchises on the minds of gamers everywhere. So, it’s only natural that fans have also … END_OF_DOCUMENT_TOKEN_TO_BE_REPLACED

While Super Smash Brothers for the Wii U and 3DS has been out for just over a year and the recent announcement of Cloud joining the roster garnering a massive amount of hype, many fans of the fighting game … END_OF_DOCUMENT_TOKEN_TO_BE_REPLACED

I’ll admit that I’ve never been a fan of visual novels. I have nothing against them; it just isn’t a genre I’m interested in. That said, MangaGamer’s announcement a while back that their upcoming Steam release of Kindred Spirits … END_OF_DOCUMENT_TOKEN_TO_BE_REPLACED

Black Shell Media is a multimedia marketing and PR studio specializing in distribution and publishing of indie games! We do a lot of marketing and work with websites, … END_OF_DOCUMENT_TOKEN_TO_BE_REPLACED

Snowfall is here and it is time to cheer! Sorry about that… As different video games pump out their holiday events, plenty get swept under the radar. If you are tired from playing the multiple FPS holiday events … END_OF_DOCUMENT_TOKEN_TO_BE_REPLACED

Amazon Prime members can get free games and free in-game content every month that last a certain amount of time. You can jump over to Amazon to sign-up for an account or navigate to the Prime Gaming section to see … END_OF_DOCUMENT_TOKEN_TO_BE_REPLACED