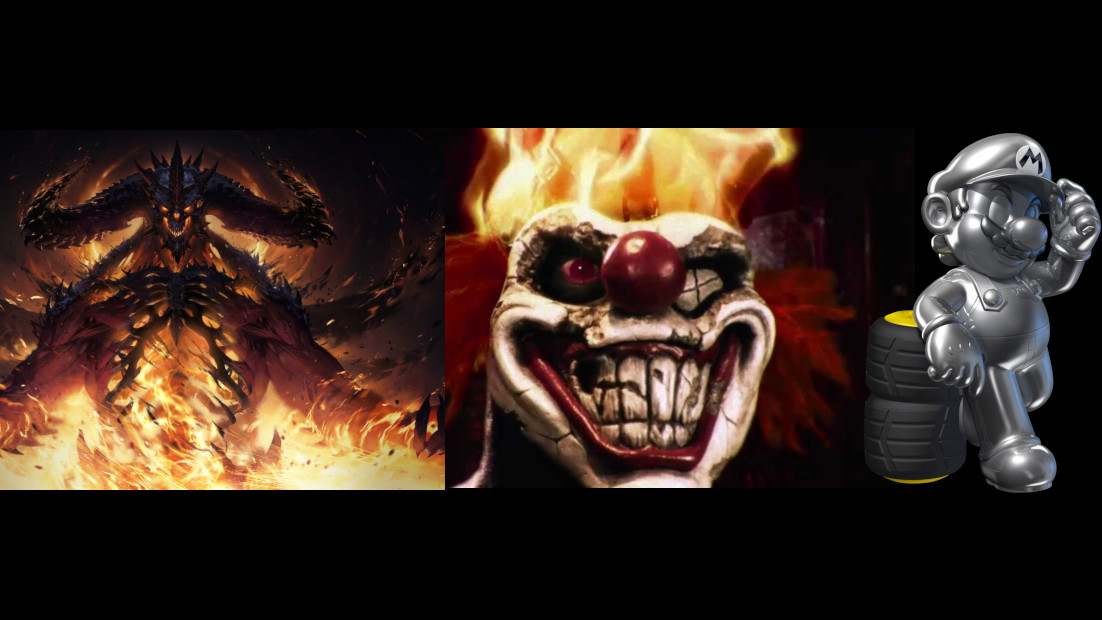 Metal and Gothic Fantasy have gone hand in hand for quite some time now.  While I’m not sure where it all started, there’s no separating them.  Video games have become one of the best purveyors of fantasy within that period and thus plenty of games have channeled this genre of music into their design.  Some may just dabble in the music, others the iconic imagery, but there are some games that embrace it deep into their blackened souls.  Let’s see which games headbang the hardest.

This franchise may not have amplifiers exploding with the sound of guitars being shredded, but it has all of the darkness and demons necessary to make this list. If we’re going by the sheer amount of blood per minute, Diablo certainly sets the bar pretty high. The mellow soundtrack, while wonderful in its own right, does little to shield the carnage that your character delivers with their various weapons and spells.

While Diablo 3 may have perhaps stepped away from the more tangibly visceral sights, the franchise still spares no expense in making the surreal monstrosities you face look extra nasty. With Diablo 4 looking darker and barbarous than ever, it seems it may be moving up the list.

It becomes almost immediately apparent that Valfaris feels like it was ripped straight out of an Iron Maiden album cover. The game features all of those classic grotesque visuals in the environment, enemies, and bosses you could ever want and it sets it to a heavy metal soundtrack. As you blast your many explosive weapons into the faces of enemies and chop their various appendages off with your ornate sword (or strange tentacle), it’s hard not to feel the metal in your soul.

While I haven’t played Blasphemous yet myself, the trailer alone screams metal harder than most metal vocalists. From the collection of eerie and often self-flagellant-looking enemies to the part where the main character fills a helmet full of blood and puts it on, it would be hard to overlook the brutality.

It’s in the name, but let’s look beyond that. The game features sadistically modified vehicles designed to destroy each other as effectively as possible. Machine guns and explosives along with a host of different deadly permutations of weaponized car parts are tossed between the vehicles while a metal soundtrack blasts in the background. We also have here one of the first in our list to feature licensed metal songs from the likes of Rob Zombie. Crazy cars are also inherently metal by the standard set by the song Fuel, so this choice isn’t up for debate.

From the same developer as Valfaris, this predecessor was their first title and, while not as good of a game as Valfaris overall, it did a bit more to embrace the metal aesthetic. The visuals are darker and dingier and your attacks, beyond the sword, are all magical. Enemies feature all of the classics like skeletons, banshees, blood infused golems, and dragons. The gothic environments drip with blood and glisten with the omnipresent moonlight. It embraces the metal aesthetic more than its sequel, even though the gameplay languishes.

Both of these titles and others in the franchise don’t hold back at all when it comes to their brutality. This comes in both the form of gruesome enemies and their attacks as well as the momentous difficulty of the game itself. The dark twisted worlds that these games take place in are the official breeding grounds of metal. Then, of course, the dismissive nature of the frequently displayed “YOU DIED” failure state drives home the fact that you’re neck-deep in a frigid pool that metal has created.

In a game where you form dungeon-venturing groups that not only die, but also develop mental illnesses, phobias, and addictions based on your actions, it’s pretty easy to see how it got the name “Darkest Dungeon.” Battling against vicious creatures by torchlight in decaying cathedral halls and moldy tome filed libraries is a savage experience, to say the least. There are even a few metal bits in the soundtrack as well, just in case the game didn’t convince you that it was brutal enough to make this metal list by content alone.

The word “Revengeance” isn’t real, it was created to make a game with the word “Metal” in the title even more metal. The story is as convoluted and strange as any given Metal Gear game, but the action is by no means the typical “tactical espionage action”. You slice your way through dozens of enemies of all shapes and sizes, often dicing them down to bite-size pieces in a show of sheer carnage throughout the game.

The soundtrack pulls no punches matching the blazing pace of the game with molten hot speed metal hanging out with strong electronic breakbeats that feel like they fell out of an unseen Matrix movie. It’s as metal as the electrically charged sword Raiden uses to make his enemies into meat confetti.

Some would probably choose this as their number one choice for metal games. I can see how that would be obvious. Not only is every visual facet of the game and gameplay designed around the metal, but it is about metal. It also helps that Jack Black voices its protagonist, a roadie for a metal band.

Jack’s role in Tenacious D, a band that even has a song entirely about “The Metal,” gives him an automatic boost of metal credentials. Brutal Legend thus gains some of that by proxy. Still, the game is primarily comedic and, while comedy has its place in metal (look at Metalocalypse), it does detract from the overall “metal value” of the game.

In the first age, in the first battle, when shadows first lengthened, one stood…

Doom. The name alone evokes a sense of foreboding. It creates the impression that whatever you’re about to partake in is going to mess you up. Going back to 1993, the franchise started cultivating its metal endorsement right away by putting the player in the role of a demon-slaying super soldier and giving it its iconic rock soundtrack.

Many iterations and millions of additional pixels later, the 2016 remake of Doom quadrupled down on the premise, making the Doom Guy into the Doom Slayer and making bloodshed even more over the top. Then they set it to a soundtrack I’m 80% sure Mick Gordon pulled from hell and played on a 666 string guitar to make sure no one would ever be able to doubt just how metal this game is.

Metal has a broad spectrum of distortion pedaled insanity for you to explore. There’s even a map if you’re curious about what all could fall under that black umbrella. From a similar perspective, you can look at the “Most Metal Games” in many ways and reach a vastly different conclusion. With that knowledge, what do you think I forgot? Are there any games on here you think shouldn’t be here? Post a comment and I’ll fight you! Really though, post a comment as I’d love to check out some more metal games.

Why The PlayStation 2 Will Never Be Outsold

(Updated 4/18/22) Even at a time when it feels like every game is being adapted into a show or movie, the news that Twisted Metal is being turned into a TV series stands out. Why? Well, it probably has … END_OF_DOCUMENT_TOKEN_TO_BE_REPLACED

(Updated 4/15/22) The reveal of the Mortal Kombat movie trailer and news that Street Fighter characters are joining the Fortnite roster has both legendary franchises on the minds of gamers everywhere. So, it’s only natural that fans have also … END_OF_DOCUMENT_TOKEN_TO_BE_REPLACED

Do so, and you’ll probably find that T END_OF_DOCUMENT_TOKEN_TO_BE_REPLACED

Do so, and you’ll probably find that T END_OF_DOCUMENT_TOKEN_TO_BE_REPLACED

I remember when I played my first Resident Evil. It was a gift and couldn’t wait to get it running in my old PS1. That old Capcom “this game contains scenes of explicit violence and gore” plastered on the … END_OF_DOCUMENT_TOKEN_TO_BE_REPLACED

At the beginning of one mission, you are marked for dead by the organization you work for. Your handler has no idea what happened but informs you that they are coming for … END_OF_DOCUMENT_TOKEN_TO_BE_REPLACED

(Updated 4/18/22) Even at a time when it feels like every game is being adapted into a show or movie, the news that Twisted Metal is being turned into a TV series stands out. Why? Well, it probably has … END_OF_DOCUMENT_TOKEN_TO_BE_REPLACED

(Updated 4/15/22) The reveal of the Mortal Kombat movie trailer and news that Street Fighter characters are joining the Fortnite roster has both legendary franchises on the minds of gamers everywhere. So, it’s only natural that fans have also … END_OF_DOCUMENT_TOKEN_TO_BE_REPLACED

The Legend of Zelda: Breath of the Wild’s critical acclaim is often met with the counter of being “overrated” by some players. There are usually numerous reasons for this – both notable and ridiculous – but one of the … END_OF_DOCUMENT_TOKEN_TO_BE_REPLACED

While Super Smash Brothers for the Wii U and 3DS has been out for just over a year and the recent announcement of Cloud joining the roster garnering a massive amount of hype, many fans of the fighting game … END_OF_DOCUMENT_TOKEN_TO_BE_REPLACED

I’ll admit that I’ve never been a fan of visual novels. I have nothing against them; it just isn’t a genre I’m interested in. That said, MangaGamer’s announcement a while back that their upcoming Steam release of Kindred Spirits … END_OF_DOCUMENT_TOKEN_TO_BE_REPLACED

Black Shell Media is a multimedia marketing and PR studio specializing in distribution and publishing of indie games! We do a lot of marketing and work with websites, … END_OF_DOCUMENT_TOKEN_TO_BE_REPLACED