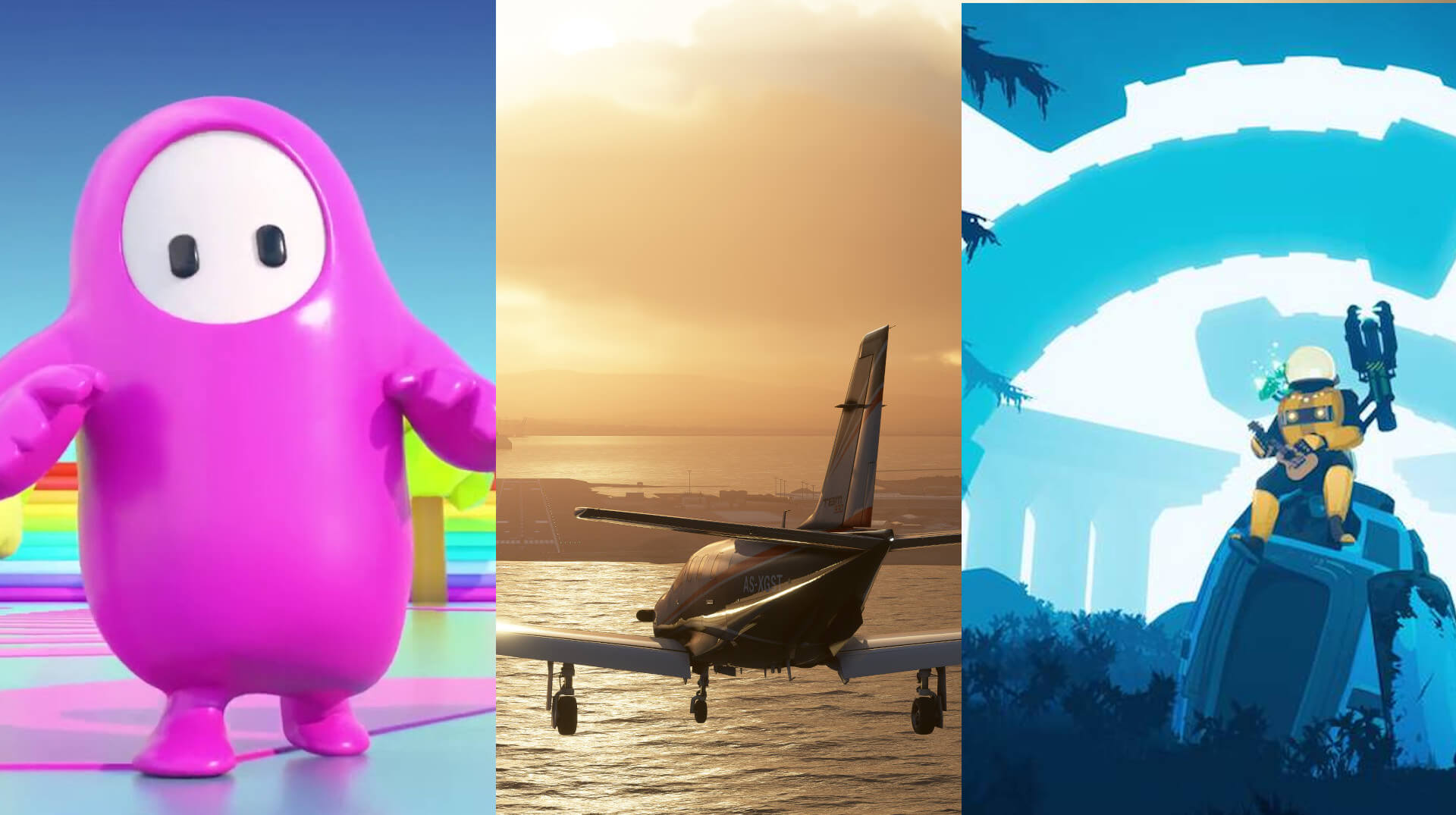 Despite 2020’s reputation thus far, it has been a notable year for games. Many highly anticipated titles have released so far and more are on their way before the year closes out. As we tip past the midpoint, August didn’t look too exciting in the lead-up, but now we’re seeing some really interesting looking games set to land this month. Let’s take a look!

This massively multiplayer gameshow-inspired free-for-all has 60 players running and jumping through a massive obstacle course of colorful traps to be the victor. In this strange adaptation of what almost seems like a battle royale, you’ll take control of a shiny little jellybean person to scurry around the playfield. As you dodge giant balls, avoid pitfalls, and plow through breakable walls, you’ll be competing to make it to the finish line first before all of the other characters.

The indie sequel no one saw coming, but everyone seems to love since its early access is about to get its full release. After the original 2D experience in 2013, this 3D follow-up greatly expands and reshapes the game. You’ll still be blasting away and a wide variety of monster creatures, but this time you can head online for a fantastic co-op experience!

Perhaps one of the most iconic PC games going all the way back to 1982 is getting a new version this year. From what I’ve seen, it’s one of the most photo-realistic games ever created. Though cruising around simulated real-world planes isn’t generally the most appealing thing for me, with it being on Game Pass, I’ll most likely give it a shot. Besides, everyone will probably want to take off and fly over their house just to see if it’s well-rendered, right?

The follow up to the first self-described “rogue-lite” is finally coming to Steam in Early Access a full seven years after the original. Much like the original, you’ll take on procedural dungeons with a new character each run. Each character is born with unique traits that provide positives and negatives like exceptional archery or colorblindness. The game seems to follow much of the same aesthetic design, but features many new traits and, of course, new gameplay.

This classic cartoon adventure about a samurai battling a mystical foe across the universe was a popular, but somewhat limited hit in the early 2000s. In 2017 it was revived for one more season and apparently, that was enough to motivate Adult Swim Games to publish a game based on the series. It looks to channel much of the classic art style, but in a 3D hack and slash platformer style.

The first Surgeon Simulator lets you take some interesting liberties with the open chest cavities of patients using controls that were… less than optimal. The insanity of this experience is now going to be augmented not just by more medical mayhem, but by more surgeons at the ready. Now you’ll be able to play with up for four players in online co-op doing whatever it is that you’d call this wacky carnage.

We live in a world where Electronic Arts delivers a deluge of sports games every year like the Old Faithful of mediocre gameplay. Madden NFL 21 will continue the series started 32 years ago in 1988. While the game has certainly come a long way since then, it may not provide a clear improvement from last year’s iteration. However, I’m sure plenty of people are excited to add this one to the collection regardless.

Six years after relaunching a franchise started back in 1988 (I guess right beside Madden), inXile Entertainment is bringing the third game to the series. This time, the player will be taking this turn-based roleplaying game into a post-apocalyptic Colorado. You’ll be venturing through the cold mountains as the last surviving member of the Team November Ranger Squad and bringing justice to the probably-frozen locals.

Continuing the trend of old franchises getting new games, these two titles are set with imprecise dates meaning they should probably release this month, but may not. Baldur’s Gate 3 is going to have an early access release despite how noteworthy the franchise is historically.

What that means for the product we ultimately get, no one knows for sure, but it will probably be a while before the full release. Serious Sam 4 on the other hand will ride the resurgence of twitchy arena-style shooters that have become popular in recent years. I hope that it too can add a couple of new dimensions from the previous games in the series much as Doom did.

Quite a few additional games are coming out too, including a previously unheard of port to PC of a PlayStation 4 exclusive with Horizon Zero Dawn. It seems we’ve come to a point where no month goes by without at least a reasonable number of new noteworthy games. Being presented with a near-limitless number of games to choose from can be either exciting or overwhelming depending on how you look at it. However you look at it, we’ll have plenty of new stuff to check out this month.

What games are you looking forward to in August?  Are there any we missed that you’re excited about?  Let us know in the comments!

Welcome ghouls, beasts, tricksters, and every horrific being known to man. The spooky season is upon us and I figured I would indulge in the festivities in my own way. Thus, I have come up with a satirical take on … END_OF_DOCUMENT_TOKEN_TO_BE_REPLACED

In 2020 it was revealed developer IO Interactive was working on a James Bond game known as Project 007 which, understandably, shook the video game world. Still in production, there’s a possibility that their James Bond game could be the … END_OF_DOCUMENT_TOKEN_TO_BE_REPLACED

Do so, and you’ll probably find that T END_OF_DOCUMENT_TOKEN_TO_BE_REPLACED

I remember when I played my first Resident Evil. It was a gift and couldn’t wait to get it running in my old PS1. That old Capcom “this game contains scenes of explicit violence and gore” plastered on the … END_OF_DOCUMENT_TOKEN_TO_BE_REPLACED

At the beginning of one mission, you are marked for dead by the organization you work for. Your handler has no idea what happened but informs you that they are coming for … END_OF_DOCUMENT_TOKEN_TO_BE_REPLACED

The history of gaming isn’t that old compared to other artistic and entertainment mediums. Many people have lived through the entirety of video game history, and more people have seen most of it. As such, you’d think that the … END_OF_DOCUMENT_TOKEN_TO_BE_REPLACED

(Updated 4/18/22) Even at a time when it feels like every game is being adapted into a show or movie, the news that Twisted Metal is being turned into a TV series stands out. Why? Well, it probably has … END_OF_DOCUMENT_TOKEN_TO_BE_REPLACED

(Updated 4/15/22) The reveal of the Mortal Kombat movie trailer and news that Street Fighter characters are joining the Fortnite roster has both legendary franchises on the minds of gamers everywhere. So, it’s only natural that fans have also … END_OF_DOCUMENT_TOKEN_TO_BE_REPLACED

While Super Smash Brothers for the Wii U and 3DS has been out for just over a year and the recent announcement of Cloud joining the roster garnering a massive amount of hype, many fans of the fighting game … END_OF_DOCUMENT_TOKEN_TO_BE_REPLACED

I’ll admit that I’ve never been a fan of visual novels. I have nothing against them; it just isn’t a genre I’m interested in. That said, MangaGamer’s announcement a while back that their upcoming Steam release of Kindred Spirits … END_OF_DOCUMENT_TOKEN_TO_BE_REPLACED

Black Shell Media is a multimedia marketing and PR studio specializing in distribution and publishing of indie games! We do a lot of marketing and work with websites, … END_OF_DOCUMENT_TOKEN_TO_BE_REPLACED

As the World Cup is nearing the end … END_OF_DOCUMENT_TOKEN_TO_BE_REPLACED