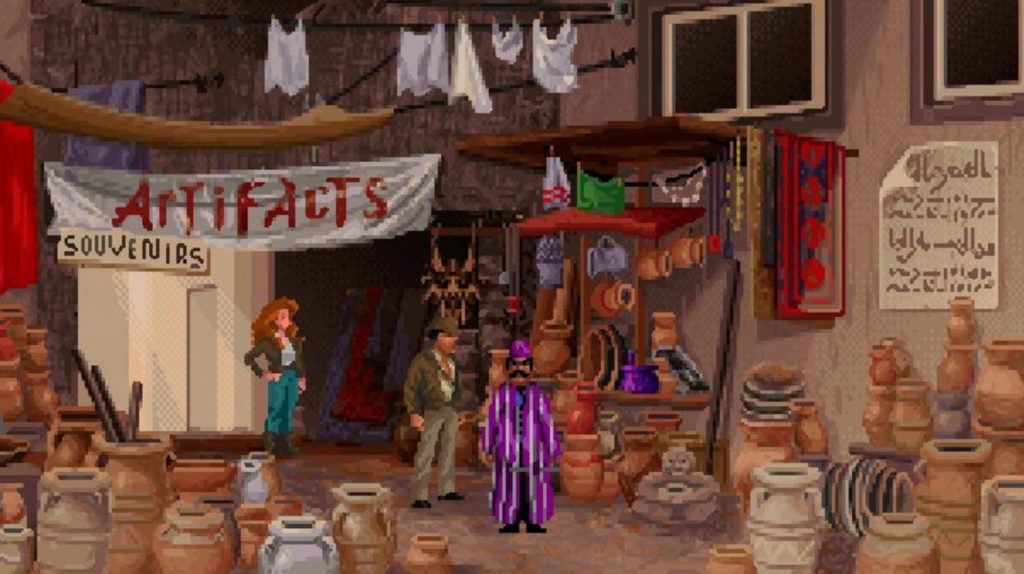 The recent announcement that Bethesda and Wolfenstein developer MachineGames will team up to make a modern Indiana Jones title was entirely unexpected but welcome in ways that feel hard to describe.

However, questions remain regarding the upcoming Indiana Jones game’s ability to usurp the Uncharted series which has become the default way to replicate an Indiana Jones-like film experience in a video game.

So has there ever been an Indiana Jones game that has replicated or surpassed the brilliance of the Uncharted franchise? That’s the question we’ll try to answer today as we look at some of the best Indiana Jones games so far to see how they stack up.

One of the first noteworthy Indiana Jones games was released later in the SNES’ lifespan (94/95). For some reason, it never seemed to get the attention you’d think it would have.

That’s a shame because this really is a very fun game. Essentially an Indiana Jones-themed take on the SNES Star Wars titles, Greatest Adventures retells the events of the first three Indiana Jones movies. Its various gameplay sequences even include vehicle and platforming events.

Actually, the game’s biggest shortcoming is that it tries a little too hard to replicate the mechanics of its Star Wars siblings. So far as that goes, it rarely surpasses the brilliance of those incredible titles and fails to find its own way outside of the visuals of the movies themselves.

Is it a better Indiana Jones game than Uncharted? No

Indiana Jones And The Infernal Machine

As the first fully-3D Indiana Jones game, The Infernal Machine was burdened by the fact it was released after the Tomb Raider series became iconic for advancing 3D gaming with the help of Indiana Jones-like themes.

What’s interesting about The Infernal Machine is how much it embraces Tomb Raider‘s innovations. More of a platform puzzler than a straight-up action game, The Infernal Machine actually attempted to replicate some of the more subtle adventuring elements of the franchise.

Sadly, the impressiveness of that effort can’t hide Infernal Machine‘s technical shortcomings. This was a rough era for 3D gaming, and while Infernal Machine made the most of what was available, it’s very difficult to revisit this game today and not wish you were playing either Uncharted or some of the latter 3D Indiana Jones titles.

Is it a better Indiana Jones game than Uncharted? No

Indiana Jones And The Emperor’s Tomb

Somewhat strangely released in 2003 far from the release of any Indiana Jones movie or show, The Emperor’s Tomb tried to pick up where Infernal Machine left off by offering an original 3D Indiana Jones adventure that felt true to the films.

Honestly, it succeeded in ways that exceeded any expectations. Emperor’s Tomb features a genuinely compelling story complimented by exciting action sequences spread across a bountiful amount of levels. Honestly, it’s still playable and enjoyable to this day.

Well…mostly. The game’s rough platforming sections do take some of the fun out of the experience and remind you that developers hadn’t quite figured out 3D cameras by 2005. Still, this is a more than worthwhile adventure you should absolutely check out.

Is it a better Indiana Jones game than Uncharted? Close, but not quite

Indiana Jones And The Fate Of Atlantis

We’re going all the way back to 1992 to talk about a game that many people refer to as the greatest Indiana Jones title ever made.

You know what? They’re absolutely right. Made by Lucasarts at the height of their point-and-click adventure creativity, The Fate of Atlantis‘ compelling narrative, devious puzzles, and wonderful environments raise a compelling argument that Fate of Atlantis is also the best adventure game ever made.

Adventure is really the keyword here. Fate of Atlantis taps into the pure adventurous spirit of the Indiana Jones films while using the stylings of the genre to offer an experience that no 3D action title could ever quite replicate. That’s why it stands alone amongst otherwise noteworthy adaptations.

Is it a better Indiana Jones game than Uncharted? Yes

Snowfall is here and it is time to cheer! Sorry about that… As different video games pump out their holiday events, plenty get swept under the radar. If you are tired from playing the multiple FPS holiday events … END_OF_DOCUMENT_TOKEN_TO_BE_REPLACED

Welcome ghouls, beasts, tricksters, and every horrific being known to man. The spooky season is upon us and I figured I would indulge in the festivities in my own way. Thus, I have come up with a satirical take on … END_OF_DOCUMENT_TOKEN_TO_BE_REPLACED

Do so, and you’ll probably find that T END_OF_DOCUMENT_TOKEN_TO_BE_REPLACED

I remember when I played my first Resident Evil. It was a gift and couldn’t wait to get it running in my old PS1. That old Capcom “this game contains scenes of explicit violence and gore” plastered on the … END_OF_DOCUMENT_TOKEN_TO_BE_REPLACED

At the beginning of one mission, you are marked for dead by the organization you work for. Your handler has no idea what happened but informs you that they are coming for … END_OF_DOCUMENT_TOKEN_TO_BE_REPLACED

The history of gaming isn’t that old compared to other artistic and entertainment mediums. Many people have lived through the entirety of video game history, and more people have seen most of it. As such, you’d think that the … END_OF_DOCUMENT_TOKEN_TO_BE_REPLACED

(Updated 4/18/22) Even at a time when it feels like every game is being adapted into a show or movie, the news that Twisted Metal is being turned into a TV series stands out. Why? Well, it probably has … END_OF_DOCUMENT_TOKEN_TO_BE_REPLACED

(Updated 4/15/22) The reveal of the Mortal Kombat movie trailer and news that Street Fighter characters are joining the Fortnite roster has both legendary franchises on the minds of gamers everywhere. So, it’s only natural that fans have also … END_OF_DOCUMENT_TOKEN_TO_BE_REPLACED

While Super Smash Brothers for the Wii U and 3DS has been out for just over a year and the recent announcement of Cloud joining the roster garnering a massive amount of hype, many fans of the fighting game … END_OF_DOCUMENT_TOKEN_TO_BE_REPLACED

I’ll admit that I’ve never been a fan of visual novels. I have nothing against them; it just isn’t a genre I’m interested in. That said, MangaGamer’s announcement a while back that their upcoming Steam release of Kindred Spirits … END_OF_DOCUMENT_TOKEN_TO_BE_REPLACED

Black Shell Media is a multimedia marketing and PR studio specializing in distribution and publishing of indie games! We do a lot of marketing and work with websites, … END_OF_DOCUMENT_TOKEN_TO_BE_REPLACED

Snowfall is here and it is time to cheer! Sorry about that… As different video games pump out their holiday events, plenty get swept under the radar. If you are tired from playing the multiple FPS holiday events … END_OF_DOCUMENT_TOKEN_TO_BE_REPLACED

Amazon Prime members can get free games and free in-game content every month that last a certain amount of time. You can jump over to Amazon to sign-up for an account or navigate to the Prime Gaming section to see … END_OF_DOCUMENT_TOKEN_TO_BE_REPLACED