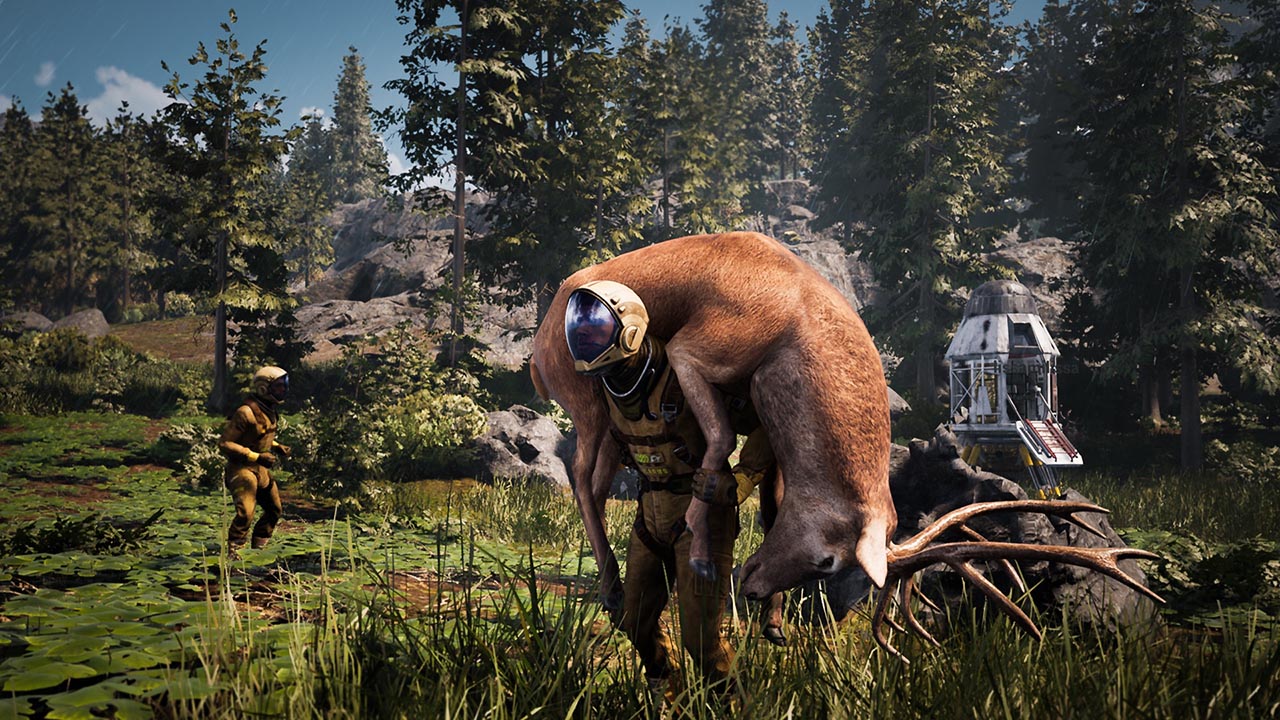 Developed by studio RocketWerkz and the creator of DayZ, Dean Hall, Icarus was first revealed in a gameplay trailer roughly ten months ago. Little has been heard of the game since that reveal. That is until the developer decided to show off the title in an hour-long livestream event.

Thanks to said event, players now know what they can expect from Icarus —  all of the best aspects of survival games such as Rust and Valheim set on a mysterious alien planet. Players are dropped onto the planet of the game — the titular Icarus — and are forced to survive a world where mankind’s attempts at terraforming went terribly awry.

The livestream, which took place on SurviveIcaru’s Twitch, gave a more detailed description of what exactly the survival gameplay of this PvE would look like. After landing on the world of Icarus,  players must scavenge and harvest materials. These materials can then be used to craft weapons and build various structures, storage containers, and other materials. In this aspect, the game feels very much like 2014’s The Forrest. Harvesting and crafting allow players to level up their various stats, such as strength, stamina, and, most importantly, health.

Unlike most Earthbound survival games, food isn’t the only scarce resource that will prove to be vital to a player’s success. Because of the alien environment, players will have a limited oxygen supply. If enough oxygen is not harvested or crafted during a playthrough, the player character will die of suffocation.

In addition to finding the necessary resources to survive, players will also have to brave the various dangers found within the open-world environment. Wildfires, storms and lightning strikes, dangerous alien species all come together to make the environment of Icarus particularly unforgiving.

Unlike most other survival games, players will take multiple trips to the surface of Icarus, called drops. During drops, players must accomplish as much as possible within a limited amount of time without dying. Then, they will have to go back into space to resupply in the player hub — dubbed the off-world station — before the next drop. If the player dies before returning to the station, all progress will be lost.

The developers at RockWerkz certainly have a unique gameplay experience on their hands. Although it has been established for quite some time now, the open-world survival genre has a lot of room to grow. Setting such a survival game on an alien planet in outer space accomplishes just that goal. Hopefully, the end product will be just as ambitious as this latest gameplay reveal seems to indicate.

Snowfall is here and it is time to cheer! Sorry about that… As different video games pump out their holiday events, plenty get swept under the radar. If you are tired from playing the multiple FPS holiday events … END_OF_DOCUMENT_TOKEN_TO_BE_REPLACED

Welcome ghouls, beasts, tricksters, and every horrific being known to man. The spooky season is upon us and I figured I would indulge in the festivities in my own way. Thus, I have come up with a satirical take on … END_OF_DOCUMENT_TOKEN_TO_BE_REPLACED

Do so, and you’ll probably find that T END_OF_DOCUMENT_TOKEN_TO_BE_REPLACED

I remember when I played my first Resident Evil. It was a gift and couldn’t wait to get it running in my old PS1. That old Capcom “this game contains scenes of explicit violence and gore” plastered on the … END_OF_DOCUMENT_TOKEN_TO_BE_REPLACED

At the beginning of one mission, you are marked for dead by the organization you work for. Your handler has no idea what happened but informs you that they are coming for … END_OF_DOCUMENT_TOKEN_TO_BE_REPLACED

The history of gaming isn’t that old compared to other artistic and entertainment mediums. Many people have lived through the entirety of video game history, and more people have seen most of it. As such, you’d think that the … END_OF_DOCUMENT_TOKEN_TO_BE_REPLACED

(Updated 4/18/22) Even at a time when it feels like every game is being adapted into a show or movie, the news that Twisted Metal is being turned into a TV series stands out. Why? Well, it probably has … END_OF_DOCUMENT_TOKEN_TO_BE_REPLACED

(Updated 4/15/22) The reveal of the Mortal Kombat movie trailer and news that Street Fighter characters are joining the Fortnite roster has both legendary franchises on the minds of gamers everywhere. So, it’s only natural that fans have also … END_OF_DOCUMENT_TOKEN_TO_BE_REPLACED

While Super Smash Brothers for the Wii U and 3DS has been out for just over a year and the recent announcement of Cloud joining the roster garnering a massive amount of hype, many fans of the fighting game … END_OF_DOCUMENT_TOKEN_TO_BE_REPLACED

I’ll admit that I’ve never been a fan of visual novels. I have nothing against them; it just isn’t a genre I’m interested in. That said, MangaGamer’s announcement a while back that their upcoming Steam release of Kindred Spirits … END_OF_DOCUMENT_TOKEN_TO_BE_REPLACED

Black Shell Media is a multimedia marketing and PR studio specializing in distribution and publishing of indie games! We do a lot of marketing and work with websites, … END_OF_DOCUMENT_TOKEN_TO_BE_REPLACED

Snowfall is here and it is time to cheer! Sorry about that… As different video games pump out their holiday events, plenty get swept under the radar. If you are tired from playing the multiple FPS holiday events … END_OF_DOCUMENT_TOKEN_TO_BE_REPLACED

Amazon Prime members can get free games and free in-game content every month that last a certain amount of time. You can jump over to Amazon to sign-up for an account or navigate to the Prime Gaming section to see … END_OF_DOCUMENT_TOKEN_TO_BE_REPLACED