A Review Of Eric Provan’s Spate

It’s a rare game that draws you into a world of realized grief-driven addiction, showing the externalized world of madness the character’s heart has become against the haunting specter of a child’s tragic death. ‘Spate,’ the debut 2.5d platformer from Eric Provan and Ayyo Games, does so with a vision that tells its story on an almost extra-planar level. Though the game never set out to revolutionize gameplay mechanics, and boasts some intermittent graphical glitches along the way, Spate does show what can truly be done with a minimalist narrative style previously reserved for film.

It is this narrative style that defines what the game was meant to be. The simple and responsive run-jump-power-up control scheme, interspersed with the occasional physics-based puzzle, serve only as a mechanism of progress. You explore the rainy and polluted world of the X-Zone as Detective Bluth, a man who has been driven to the brink of suicide by his dependence on the green fairy known as absinthe. Drinking absinthe gives Bluth greater speed and jumping power, but you pay for it with warped visuals that disorient your sense of the game’s physics.

Even without the absinthe, the world you travel is filled with wonderfully bizarre and polluted landscapes rife with strange creatures and odd geographical formations. Gnarled trees and weathered boulders twist and turn in midair. Monument-sized anthropoid busts rise from the horizon with surreal contradiction in the misty green-tinged atmosphere. Using fore, mid, and background planes to create a hypnotizing blend, every last scene is worth gazing into. The character design, such as the gold-skinned Dubhlainn D’arcy and the supporting character Robot, are an altogether amazing stylistic hybridization. Jim Henson’s darker and sophisticated puppeteering sensibilities, like that seen in Labyrinth and The Dark Crystal, are wonderfully mingled with a healthy dose of Tim Burton’s mildly macabre eccentricities. All the weirdness you see, brilliantly animated and directed by Provan, is tethered to the deterioration of Bluth’s mind and provides some clue to the mystery he is trying to solve. But is it all really a hallucination? 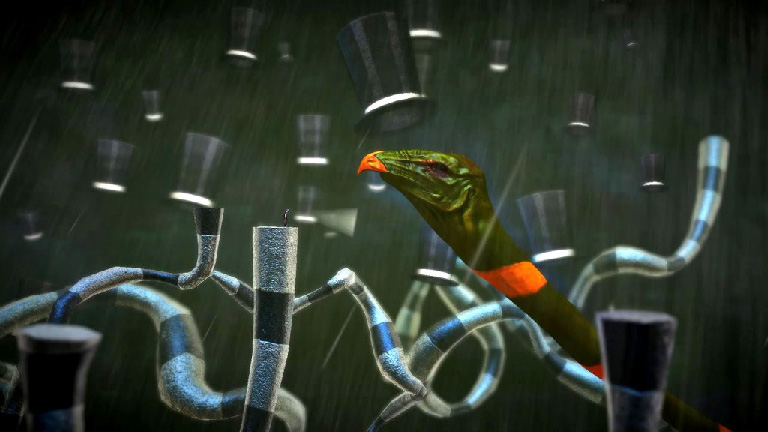 Bluth, however, has other reasons for making his journey than just a routine missing person case. Ten years prior to the game a disappearance of thousands occurred that included Bluth’s little girl, and he is haunted by her specter as he recounts his guilt along the way. This is played out like an extended third act, where all the history that came before is given to us in voice over accompanied by haunting images of a world that reflect the inner turmoil of the protagonist.

But not every encounter is a product of the absinthe. Gigantic saw blade contraptions that look like they belong in a slaughterhouse, falling cannon balls that explode on impact, and other nefarious means of death from above. When not facing falling objects, four-way flame throwers spiral with long slow arms that can make you bob and weave the controller as you make your next leap. In between story and platforming are the physics games. You’ll use cannons to knock over obstacles with velocity mechanics. Later you’ll pilot a flying boat through a frenetic cavern full of all the aforementioned objects and some new ones thrown in. The puzzles work in their trippy way with smooth and responsive control. They also serve to pace the game well, and add to the visual theme of disorienting oddity. 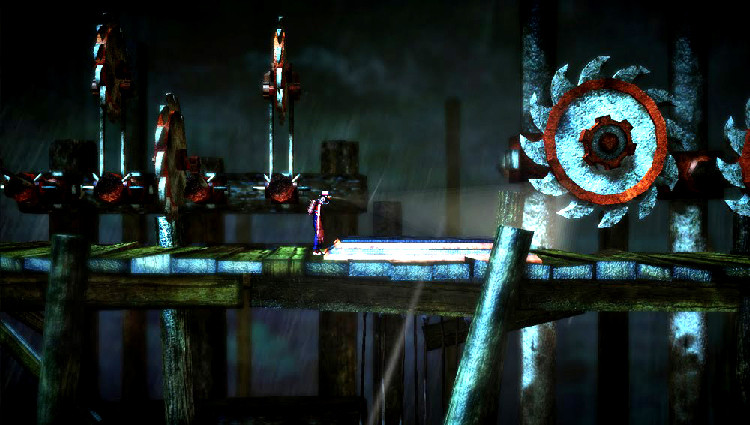 The surrealist theme doesn’t end with the visuals or the gameplay, as no story about torrential downpour is complete without a bleak and eerie soundtrack accenting pitch-perfect rain shower audio so good you can almost feel the droplets smack your skin. Even the pitch of Detective Bluth’s voice feels like it is an organic extension of the mood, as if it is part of one giant organism fed by the tangible gloom.

Spate does miss some notes later in the game, mainly in scenes with subtext meant to drive home the point of Bluth’s falling into inescapable madness. At one point Bluth is swept ever downward by a steep current intended to demonstrate his descent into insanity, but never really sees the character of Bluth change much, only a rather calm and comfortably numb acknowledgement that he can’t change. Dialogue can also seem a little flat at times in text conversations, lacking the strength of the voice actors to give it the proper delivery. The final scene in the game also feels a bit contrived, as the resolution to the conflict is abrupt and unsatisfying. Between these two moments, and afterward, depending on the ending you choose, Bluth’s ascent is successfully visualized by a challenging puzzle that sees him swimming upward in a green mist amidst blades and flame throwers to face down the truth of his daughter’s disappearance. 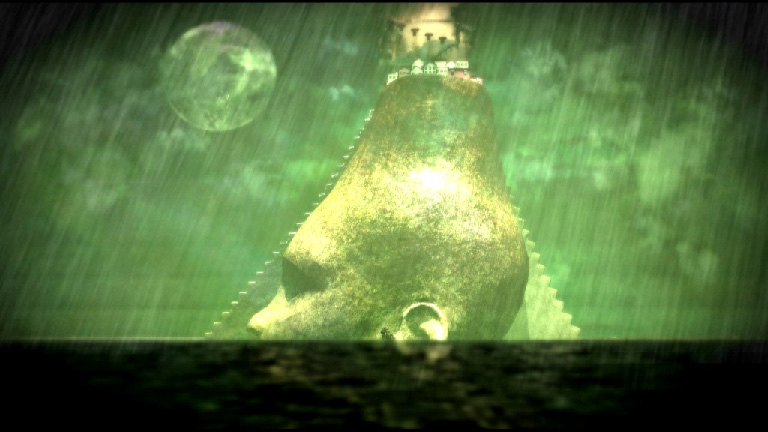 On the technical side, occasional graphical glitches cause mild interruption in the experience. The green pads on jumping platforms sometimes dislocate from their bases. Animation occasionally hitches which slows the player down. The latter problem was cured by a swig of absinthe, which almost makes it seem okay. Almost.

The game ends with two choices centered on the game’s opening image of Bluth falling, and each presents you with a unique ending. Without spoiling either choice, one of them leads to an ending that would have been better served if it had been given the same poignant and emotional art direction as its opposite, but the message of this particular conclusion is more than clear, which is perhaps both its greatest strength and biggest weakness.

There is so much more to say about a game that says so many things with its atmosphere alone. Every screen contains depth that begs exploration, with characters you want to know more about. Aside from the occasional glitch and less than stellar text dialogue, you get an amazing set of vocal pieces that bring you into a surrealist vision of the hard-boiled detective story. With visionary art direction, movement that carries satisfying weight to its physics, and an absorbing world that gets you lost in a new world for a couple hours one night, Spate is a game not to be missed.

Wondering if you can run Halo Infinite on your laptop or desktop? Sure, why not? Halo Infinite has launched in open beta mode (Nov. 16, 2021) and will officially release on Dec. 8, 2021. The game is the sixth in … END_OF_DOCUMENT_TOKEN_TO_BE_REPLACED

I remember when I played my first Resident Evil. It was a gift and couldn’t wait to get it running in my old PS1. That old Capcom “this game contains scenes of explicit violence and gore” plastered on the … END_OF_DOCUMENT_TOKEN_TO_BE_REPLACED

At the beginning of one mission, you are marked for dead by the organization you work for. Your handler has no idea what happened but informs you that they are coming for … END_OF_DOCUMENT_TOKEN_TO_BE_REPLACED

If you were to bet me $20 that Amazon would be making an MMORPG at some point, I would still find some reason to not give it to you. Amazon games announced 3 new PC games to try to … END_OF_DOCUMENT_TOKEN_TO_BE_REPLACED

The Legend of Zelda: Breath of the Wild’s critical acclaim is often met with the counter of being “overrated” by some players. There are usually numerous reasons for this – both notable and ridiculous – but one of the … END_OF_DOCUMENT_TOKEN_TO_BE_REPLACED

I don’t play a lot of Apex Legends anymore. I enjoyed the game for a while, but there aren’t many games I’ve stayed with consistently over the long haul since the lost years of World of Warcraft. These days there … END_OF_DOCUMENT_TOKEN_TO_BE_REPLACED

Diehard fans of Call of Duty’s groundbreakingly successful battle royale – Warzone – have been eagerly anticipating the release of a new map for months now. … END_OF_DOCUMENT_TOKEN_TO_BE_REPLACED

The science-fiction horror game, originally released in 2008, was a massive success that influenced an entire generation of games within space/horror genre. Despite the … END_OF_DOCUMENT_TOKEN_TO_BE_REPLACED

After months of speculation regarding the release of an upgraded Switch system, Nintendo finally revealed its latest gaming system — the Nintendo Switch OLED Model. The new Switch will release on October 8, costs $349.99, and offers a long list … END_OF_DOCUMENT_TOKEN_TO_BE_REPLACED

The Legend of Zelda: Breath of the Wild’s critical acclaim is often met with the counter of being “overrated” by some players. There are usually numerous reasons for this – both notable and ridiculous – but one of the … END_OF_DOCUMENT_TOKEN_TO_BE_REPLACED