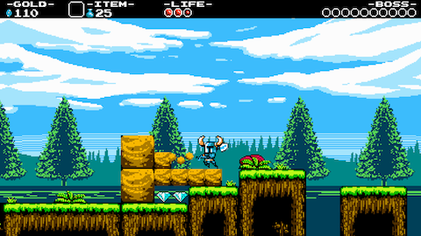 It’s human nature to feel nostalgic for the past, and the current state of the indie game industry illustrates this. While big AAA companies are funneling monster budgets into projects that look nicer than they play, indie developers are harkening back to the games of yore in an attempt to capture that childlike wonder of adventure that games were so commonly defined by.

This isn’t to say modern gaming can’t offer that kind of feeling, far from it; plenty of games have come out in the past few years that have defined genres and moved the industry forward. The problem is, the gaming market is overly saturated with games that just don’t have that same passion put into it. It’s uncomforting when a big, anticipated game comes out and it’s released with a truckload of free DLC alongside it. As the industry moves forward, creativity moves backwards, and while it doesn’t bode well for future generations, indie developers are more than picking up the slack.

Take Yacht Club Games for example. Their 2014 platformer, Shovel Knight, was able to not only capture the feeling of an NES platforming to a T, it also added its own contributions to the genre. Shovel Knight wasn’t made for a quick buck and it shows. It’s a passion project reminiscent to those of the past. In a year that was absolutely dominated by sequels and spin-offs to existing franchises, a new IP was able to come out and leave a mark, proving that new ideas are still being craved; now more than ever, arguably.

More recently, Toby Fox’s Undertale made a big splash in the gaming community, garnering an enormous fanbase and even winning GameFAQs’ Best.Game.Ever. contest. It’s a love letter to RPGs developed entirely by one person, but it doesn’t falter for that. Like Shovel Knight, Undertale doesn’t just tread the same tracks as its forefathers to cater to the nostalgic of the world, it adds its own spin on things, creating a fresh experience, something sorely lacking among big name developers at the moment.

In a lot of ways, the indie scene isn’t too different from the AAA big boys. Both rely on using ideas from the past, but only the former bothers on refining those ideas. The big name games that change the industry certainly leave an impact, but they’re too far and few between. Games get massive amounts of advertisement, get hyped to no end, and ultimately get forgotten in a month. Ubisoft is a grand offender of this with each Assassin’s Creed and Far Cry spilling into each other to create a visually stunning, but forgettable experience.

It seems that when studios realize how easy it is to make money with a name, all passion gets thrown out the window for safety and for some bizarre reason, they get away with it. Sequels sell great and it takes a real disaster to create a financial hit. Indie developers don’t have this luxury, they have to struggle to advertise and get their games released, and they need to be original, or else they take a hit. While big developers get rewarded for unoriginality, the indie devs get punished for it.

To some extent, perhaps this reversal is for the best. Indie developers have proven time and time again that they can hold their own against behemoths, and the expectations and weight they carry of creating a new, original product does a lot for that. There’s stress in not knowing how well your game will sell, if the IP will take off, if it’ll even be well received. Indie developers can’t afford a bad review, and because of that it feels, more times than not, they’ve put their all into creating something they really want to create, and so long as this is the case, the indie scene will keep creativity alive in the gaming world.

Snowfall is here and it is time to cheer! Sorry about that… As different video games pump out their holiday events, plenty get swept under the radar. If you are tired from playing the multiple FPS holiday events … END_OF_DOCUMENT_TOKEN_TO_BE_REPLACED

Amazon Prime members can get free games and free in-game content every month that last a certain amount of time. You can jump over to Amazon to sign-up for an account or navigate to the Prime Gaming section to see … END_OF_DOCUMENT_TOKEN_TO_BE_REPLACED

Do so, and you’ll probably find that T END_OF_DOCUMENT_TOKEN_TO_BE_REPLACED

I remember when I played my first Resident Evil. It was a gift and couldn’t wait to get it running in my old PS1. That old Capcom “this game contains scenes of explicit violence and gore” plastered on the … END_OF_DOCUMENT_TOKEN_TO_BE_REPLACED

At the beginning of one mission, you are marked for dead by the organization you work for. Your handler has no idea what happened but informs you that they are coming for … END_OF_DOCUMENT_TOKEN_TO_BE_REPLACED

The history of gaming isn’t that old compared to other artistic and entertainment mediums. Many people have lived through the entirety of video game history, and more people have seen most of it. As such, you’d think that the … END_OF_DOCUMENT_TOKEN_TO_BE_REPLACED

(Updated 4/18/22) Even at a time when it feels like every game is being adapted into a show or movie, the news that Twisted Metal is being turned into a TV series stands out. Why? Well, it probably has … END_OF_DOCUMENT_TOKEN_TO_BE_REPLACED

(Updated 4/15/22) The reveal of the Mortal Kombat movie trailer and news that Street Fighter characters are joining the Fortnite roster has both legendary franchises on the minds of gamers everywhere. So, it’s only natural that fans have also … END_OF_DOCUMENT_TOKEN_TO_BE_REPLACED

Snowfall is here and it is time to cheer! Sorry about that… As different video games pump out their holiday events, plenty get swept under the radar. If you are tired from playing the multiple FPS holiday events … END_OF_DOCUMENT_TOKEN_TO_BE_REPLACED

Welcome ghouls, beasts, tricksters, and every horrific being known to man. The spooky season is upon us and I figured I would indulge in the festivities in my own way. Thus, I have come up with a satirical take on … END_OF_DOCUMENT_TOKEN_TO_BE_REPLACED