What do the hallucinatory images of Hunter S. Thompson, cybercrime, and jazz music have in common with Cold War espionage you say? Absolutely nothing, but Necrophone Games heaps love on the concept of such absurd combinations in their tantalizingly weird first-person adventure Jazzpunk, putting you in the role of everyman secret agent Polyblank, who is sent to foil a number of farcical threats amidst gag after gag of the Terry Gilliam variety. 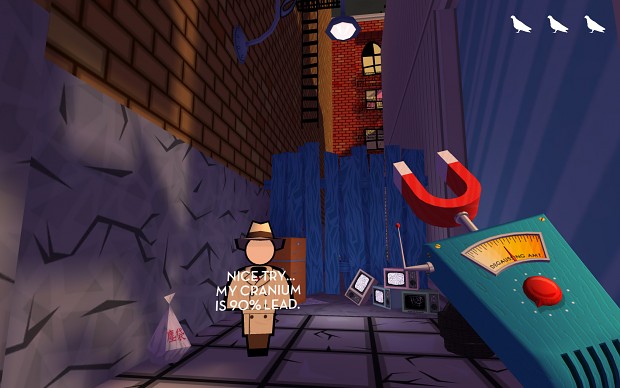 Would you believe he has a wine cellar under that desk?

In fact, the whole thing could have hopped out of a Monty Python production, as the game begins with a snazzy intro that should really come with an epilepsy warning, but is nevertheless entertaining as it traces your circuitous globe-trotting path as a piece of luggage to a basement hallway at a major airport, a trip heavily reminiscent of the flashy opening credits of the psychedelic films of the 60’s. Once there you receive a mission from the mustachioed ‘Director’ to infiltrate the Russian Consulate, where it is confirmed that everyone looks like a bathroom sign and you can photocopy your rear end.

Right away you are greeted with a rainbow of old school 3D models, smooth but flatly textured under the pixelated glory of a somewhat realistic sky. If this doesn’t suck you back into the golden age of PC games (i.e., the 90’s,) nothing will. In fact, the dated nature of the graphics, while clearly intentional, is a welcome sight and turn out to be rather beautiful in their own trippy way, making your raucous journey through the world that much funnier. 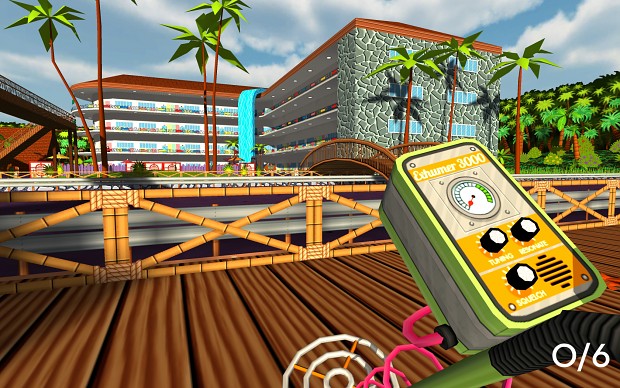 The ‘Exhumer 3000’ will dredge up some crazy junk. Don’t forget the turtle.

And it’s exploring your way through the nooks and crannies of the world that pure left-field absurdity truly begins, as you are handed a bottle of pills that whisk you off to the former USSR and into the first of many world-spanning levels containing obscene amounts of nostalgia-laden Easter eggs, which are the real stars of the show. Wandering the world brings you into contact with all manner of things you never expected to see as you complete your objectives, marked with a white dash circle that indicates interaction. These can take the forms of witty pop-culture references to comically gutted classic games. Grabbing a bowl of fruit at a wet bar (literally in a pool) reveals a surprising character appearance. Finding a wedding cake on a beach reveals a mod for a rather popular shooter from yesteryear, complete with a fake chat script which expertly simulates gamer speak. Trust us, you’ll wonder if you have the energy to truly explore the world long enough to find the end of these things before going to the next mission. And none of it is wasted.

Even though the Easter eggs are what keep your head in the game, the missions themselves have plenty of humorous moments. Whether it’s throwing a jar full of spiders at a cook just to get access to the kitchen or beating off feds with an artificial kidney, you won’t be disappointed by the second-banana nature of the missions, which serve more as a MacGuffin for pulling you through the parade of unexpected humor and hidden mini-games than telling a great story. Oh, and remember the ultimate NES cheat code? Up, Up, Down, Down, Left, Right, Left Right, BA, Start, and see what happens. 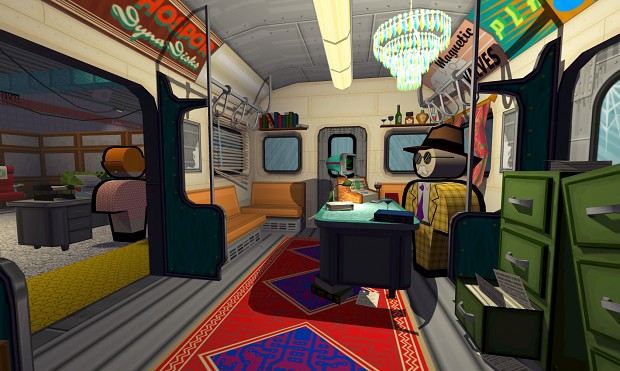 But we suppose you’re wondering why the heck this game is called Jazzpunk. If you’ve ever listened to a true classic jazz piece of the Miles Davis variety, then this game is a personification of the explosive light-speed trumpets and off-the-cuff riffing of Dizzy Gillespie himself, every color and zany moment as if it were as spontaneous as the frenetic improvisations of the masters themselves. Oh, and the game also has a jazz soundtrack that perfectly accompanies both the atmosphere of the game and individual moments without smothering the canvas.

For some, Jazzpunk is going to be an acquired taste, but even if you aren’t over the moon for the whole experience there will be something that you find hilarious in every level. From Hula girls talking in Scottish accents, to robots made of recycled (and dirty) tuna cans, to the hilarious renditions of classic games and unexpected pop-culture moments, you won’t find another game that makes you scratch your head, laugh out loud, and bring back great memories of games long past, all at the same time. With simple controls and simple gameplay, nothing gets in the way of your enjoyment. Now go forth and save the world. And never overclock your underwear.

Welcome ghouls, beasts, tricksters, and every horrific being known to man. The spooky season is upon us and I figured I would indulge in the festivities in my own way. Thus, I have come up with a satirical take on … END_OF_DOCUMENT_TOKEN_TO_BE_REPLACED

The month of October is here, and the spooky festivities are starting. However, it is still key to be aware of the other important events happening around this time of the year. For example, October is Breast Cancer Awareness month. … END_OF_DOCUMENT_TOKEN_TO_BE_REPLACED

Do so, and you’ll probably find that T END_OF_DOCUMENT_TOKEN_TO_BE_REPLACED

I remember when I played my first Resident Evil. It was a gift and couldn’t wait to get it running in my old PS1. That old Capcom “this game contains scenes of explicit violence and gore” plastered on the … END_OF_DOCUMENT_TOKEN_TO_BE_REPLACED

At the beginning of one mission, you are marked for dead by the organization you work for. Your handler has no idea what happened but informs you that they are coming for … END_OF_DOCUMENT_TOKEN_TO_BE_REPLACED

The history of gaming isn’t that old compared to other artistic and entertainment mediums. Many people have lived through the entirety of video game history, and more people have seen most of it. As such, you’d think that the … END_OF_DOCUMENT_TOKEN_TO_BE_REPLACED

(Updated 4/18/22) Even at a time when it feels like every game is being adapted into a show or movie, the news that Twisted Metal is being turned into a TV series stands out. Why? Well, it probably has … END_OF_DOCUMENT_TOKEN_TO_BE_REPLACED

(Updated 4/15/22) The reveal of the Mortal Kombat movie trailer and news that Street Fighter characters are joining the Fortnite roster has both legendary franchises on the minds of gamers everywhere. So, it’s only natural that fans have also … END_OF_DOCUMENT_TOKEN_TO_BE_REPLACED

Welcome ghouls, beasts, tricksters, and every horrific being known to man. The spooky season is upon us and I figured I would indulge in the festivities in my own way. Thus, I have come up with a satirical take on … END_OF_DOCUMENT_TOKEN_TO_BE_REPLACED

In 2020 it was revealed developer IO Interactive was working on a James Bond game known as Project 007 which, understandably, shook the video game world. Still in production, there’s a possibility that their James Bond game could be the … END_OF_DOCUMENT_TOKEN_TO_BE_REPLACED