A Review of Endless Legend 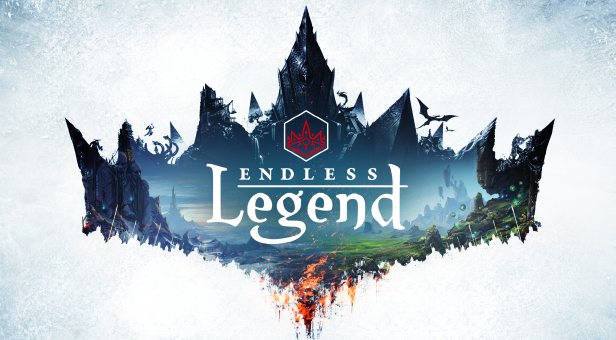 Endless Legend is a turn based 4X strategy game developed by Amplitude Studios. While Civilization hearkens back to the great leaders and civilizations of the past, Endless Legend is based in a fantasy world within the Endless Space universe. As soon as you load up a new game you are presented with a cinematic introducing your faction and giving a brief backstory to their ambitions. Whether it is the dragon-human hybrid Drakkens, the ominous doll-like figures of the Cultists, or the spirit bound knights of the Broken Lords, each opening is engaging and does well in letting you know exactly who it is you are representing. This knowledge of your selected faction only grows through the rich lore attached to each unit and the faction specific quest you are given from the start, creating an interesting story for each of the 8 (or 9 if you have the DLC) civilizations. 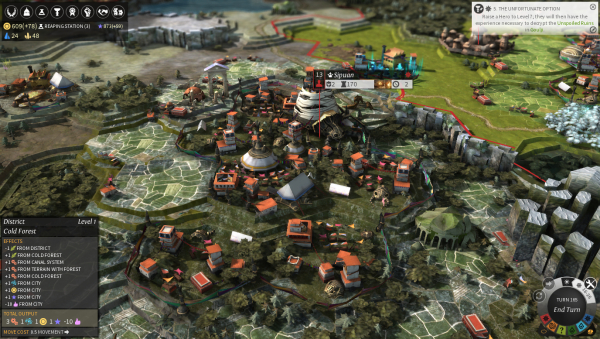 The map visuals are gorgeous – while each tile of land is given the traditional hexagonal shape, they are filled with detail like shimmering emerald deposits or steaming geothermal pits. Anomalies like burning trees and constantly moving rumbling stones will also pop up (given you turn on the option for anomalies to appear) giving unique bonuses and straying from the average land tile. It’s one of the best-looking 4X games I’ve played. Each unit is clearly depicted when darting across the region as you give orders to return to your capital, while retaining a very clean approach when you zoom out to a general map of the regions. The soundtrack adds to the presentation with ambient noises of birds chirping and rivers bubbling while a calming song is played.

While Endless Legend will be compared constantly to its fellow 4X games, it’s the differences between them that make this game so unique. Going back to the factions, each one plays differently and has different parameters. The scavenger Necrophages do not allow any peaceful negotiations or bribing and must constantly engage in battle to retrieve cadavers for their food stockpiles. Meanwhile the Cultists are not allowed to construct new cities, but can convert pacified villages to its ways to spread the ways of the Eternal End. Each faction has these unique rules that separate them from one another, making no two factions play the same. A main quest is given to each faction, generally flowing with the playstyle outlined by the rules, which can have multiple branches. If you choose to replay the game, each quest may turn out differently the second time around. This makes your choice at the start of a game so much more critical as you decide what benefits and restrictions you want to impose on yourself in that session. That being said, the player is still given the freedom to go about achieving whatever of the 9 victories they see fit as long as it isn’t blocked off by the faction’s limitations.

Multiple heroes can also join in, giving bonuses to your armies and cities. These heroes are able to level up and gain perks that can increase movement for other units or boost gold production within the city they are posted at. You are not constricted to the heroes of your faction, as you can purchase others through the market. Heroes and basic units are customizable, giving you the ability to equip items forged from the resources you’ve gathered and boost stats. Units from villages you control can also be customized, renamed, and given equipment. It all goes towards making your army feel more of your own, as well as giving more purpose to the extra resources you gather. These armies can then clash in a battle system unlike any other. Instead of having two units simply clash and seeing the outcome based purely on stats, you are transported to a close up of the battlefield. It is there you are able to position your soldiers and use tactics like flanking on your opponent in an attempt to tip the scales. This system creates a more dynamic and strategic flair to battles, which is sometimes lacking in other 4X games.

A region system is implemented in the map to separate the large continents into smaller spaces. Each region generally comes with a neutral village the player can pacify, as well as the ability to build a city. Only one city can be built per region, placing more emphasis on where you decide to put that city and how long you take before expanding. Again, it creates a dynamic unique to Endless Legend where you decide what regions to go after and which to leave for your enemies to seize control of. I’m oddly reminded of Risk as I try to take control of all regions surrounding my capital for maximum control. The two DLC added, Guardians and Shadows, only add to the experience with things like Legendary Deeds, powerful Guardian Units, global events for all to partake in, and an espionage system lacking from the original game. With no sign of the support for this game stopping, more DLC that will add more great features is hopefully down the line.

For all it does right though, Endless Legend does have its flaws. For having such a brilliant start with the opening cinematic for each faction, players will be disappointed when their hours of hard work have gone mostly unrewarded at the end of the game. A static victory screen awaits you at the end of your multi-hour journey. Many players, including myself, were so excited to see a cut scene like the beginning of the game, showcasing our victories and announcing what our factions had done after conquering, only to be disappointed.

Another issue many people may have is the user interface of the game being a tad overwhelming at first. With dozens of stats like your dust income and the multiple shortcuts to things like the science management screen at the top, players unfamiliar with the 4X genre may get lost in translation and make mistakes at first. The tutorial for the game, while it does a good job in introducing a lot of the basic mechanics and lays the groundwork for players to figure out a proper way to start a game, lacks explanations for some of the more intricate mechanics for each faction. I almost wish each faction was given its own tutorial to teach players how to play the Broken Lords versus the Raving Clans. The more complex factions then require research online as to how to effectively play them. Endless Legend is not easy to just jump into. With so many rules for each faction, and the task of micromanaging an empire, you can get lost and frustrated. Yet if you persevere and learn its ways, Endless Legend provides a rich, unique 4X experience unlike any other.

Here’s a breakdown of Endless Legend:

– Writing and lore is great!

– Unit customization is unique and cool, as are heroes.

-Regions and city limit is unique!

– Battle system separates it from Civ, bringing a bit more strategy to fights.

– Ending cinematics not nearly as satisfying as starting ones.

– UI can be overwhelming at first.

Do so, and you’ll probably find that T END_OF_DOCUMENT_TOKEN_TO_BE_REPLACED

I remember when I played my first Resident Evil. It was a gift and couldn’t wait to get it running in my old PS1. That old Capcom “this game contains scenes of explicit violence and gore” plastered on the … END_OF_DOCUMENT_TOKEN_TO_BE_REPLACED

At the beginning of one mission, you are marked for dead by the organization you work for. Your handler has no idea what happened but informs you that they are coming for … END_OF_DOCUMENT_TOKEN_TO_BE_REPLACED

(Updated 4/18/22) Even at a time when it feels like every game is being adapted into a show or movie, the news that Twisted Metal is being turned into a TV series stands out. Why? Well, it probably has … END_OF_DOCUMENT_TOKEN_TO_BE_REPLACED

(Updated 4/15/22) The reveal of the Mortal Kombat movie trailer and news that Street Fighter characters are joining the Fortnite roster has both legendary franchises on the minds of gamers everywhere. So, it’s only natural that fans have also … END_OF_DOCUMENT_TOKEN_TO_BE_REPLACED

The Legend of Zelda: Breath of the Wild’s critical acclaim is often met with the counter of being “overrated” by some players. There are usually numerous reasons for this – both notable and ridiculous – but one of the … END_OF_DOCUMENT_TOKEN_TO_BE_REPLACED

(Updated 4/18/22) Even at a time when it feels like every game is being adapted into a show or movie, the news that Twisted Metal is being turned into a TV series stands out. Why? Well, it probably has … END_OF_DOCUMENT_TOKEN_TO_BE_REPLACED

(Updated 4/15/22) The reveal of the Mortal Kombat movie trailer and news that Street Fighter characters are joining the Fortnite roster has both legendary franchises on the minds of gamers everywhere. So, it’s only natural that fans have also … END_OF_DOCUMENT_TOKEN_TO_BE_REPLACED

Do so, and you’ll probably find that T END_OF_DOCUMENT_TOKEN_TO_BE_REPLACED