A Review of ‘Templar Battleforce’ from Trese Brothers

Upon first glance, Templar Battleforce seems to take a lot of cues from Games Workshop’s monolithic 40k license. On second glance…it still takes a lot from 40k, but does so in a mechanically sound tactical RPG package that’s better than most of the official 40k games we are getting these days. In many ways it reminds me of the recent Deathwatch game, except without all the grind that was clearly meant to “encourage” you to buy microtransactions in the original mobile version. It also has a lot more depth and sells for less than half the price of the Steam version.

The setting of Templar Battleforce will be immediately familiar to 40k fans, both in terms of lore and visual design. It’s the distant future and humanity has reached the stars. Assaulted on all fronts by traitors, rogues, pirates, and xenos scum, the Templars are humanity’s best and last defense in the depths of unknown space. Much like the Space Marines of 40k, Templars are superhumans encased within giant suits of armor called the Leviathan battle mechs, standing 10-feet tall and carrying enough destructive firepower to annihilate a city block. Battleforce is apparently a sequel and part of a long-running series by the Trese Brothers, but the story is self-contained and fills you in on enough of the lore that you won’t be totally lost.

You’ll start off in a string of lengthy tutorial missions where your fleet is attacked by Tyranid–I mean “Terrox Xenos,” a race of bug-like aliens and longtime enemies of humanity. If I have one complaint about enemy variety it’s that the game takes a while to introduce more enemy races. Oh, you’ll encounter many different types of xenos, but a sizeable chunk of the early game consists of fighting this one race of aliens inside the narrow corridors of starships, resulting in missions that feel quite similar. 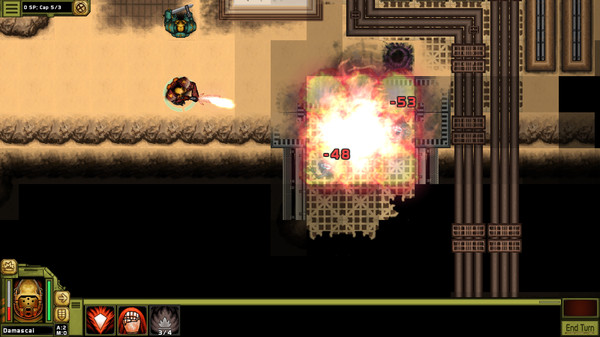 Luckily, the core combat mechanics are quite solid and rewarding. You’ll control a squad of persistent, customizable Templars from a variety of classes. Some missions will force you to play with the units you start with, while others contain tactical points that can be captured and held, allowing you to accumulate resources to call in additional Templars. Mission objectives are quite varied and include missions like survive X number of turns, capture specific objectives, escort NPCs, or even some puzzle levels. One mission requires you to direct energy flowing through a pipeline to different generators to restore power to a ship, not unlike the “power node” game modes that were popular in old arena shooters like Unreal Tournament. Hidden secondary objectives are quite common as well and award additional resources or in-game effects that make the mission easier.

Each character has both movement and action points. The levels are grid-based, with each movement point allowing your character to move one square. After you’ve moved, you spend action points to make attacks or use various support abilities. Each class has many different special abilities that they’ll learn over the course of the game, from buffs to heals, repairs, deployable equipment like turrets, and grenades. Many abilities have a set number of uses each mission, requiring you to carefully consider when and where you use them.

There are eight different classes in total, and Battleforce does a nice job diversifying them enough so that they have their own niches to fill. Sometimes their uses will overlap, but not so much that classes will become obsolete as you unlock newer ones. Soldiers and Neptunes fulfill quite similar roles at first glance, and even share a variation on the Overwatch ability, but the further down you get in the tech tree the more the classes differentiate themselves. 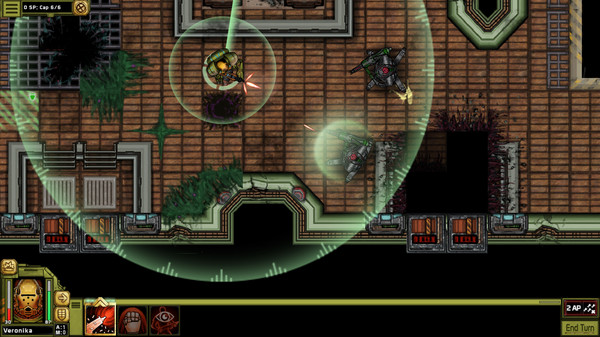 While the turn-based combat is good and has plenty of depth, there could be some little quality of life improvements. Battleforce doesn’t do a particularly good job showing you some information, even after recent updates to address this. Line of sight sometimes isn’t clear, and the game’s rather spartan presentation doesn’t help matters. Weapon range is displayed as a circular, rotating radar display over the character, which may look nice but can be awkward at first considering the game is grid-based. You also need to count tiles before making your movement, as the game doesn’t highlight your potential movement range like in Fire Emblem or similar turn-based tactics games. After the last update the game highlights the path you are moving along, but I think it could still be better.

My last bugbear about combat is the inability to skip animations, which can get particularly irritating when fighting swarm enemies like the xenos. Oh, and enemy spawns can be pretty cheap at times; enemies appearing right near your characters without giving you a chance to react is pretty common. I’ve never lost characters due to this, but I suppose that it could be downright infuriating on harder difficulty levels like Battleforce‘s equivalent of X-COM‘s Ironman mode. 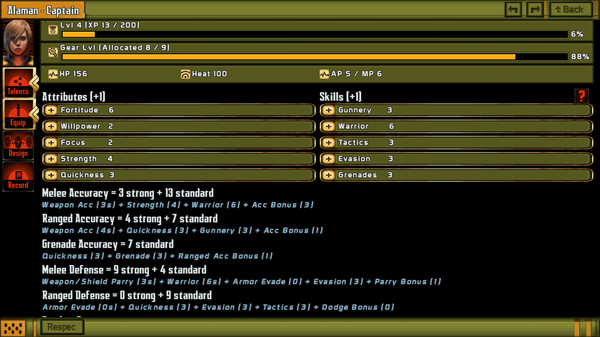 Between missions you’ll have a chance to upgrade your characters and build your squad. Each character levels up as you play, gaining two points to spend in two separate stat lists. One set of stats are generic skills available to all classes that determine things like health pool, critical chances and damage, weapon accuracy, etc. The second set of stats tend to focus on the specific skills and abilities of that class.

The other layer of character customization is the Requisition Tree. This is a giant tech tree that allows you to spend Requisition points to purchase new special abilities and gear for your characters. The tree is pretty vast, starting at the center and gradually branching out into the various classes. One thing that can get annoying about this system is that when you unlock a new class you’ll often be very limited in what special abilities and gear that class has access to until you get further down their part of the Requisition tree, making it difficult to justify using new characters from a newly unlocked class when you have older classes that are further developed.

Luckily though, new recruits aren’t completely green and tend to be of a comparable level to your other troops, at least on the easier difficulty settings. You can also respec characters whenever you want. On the harder settings you can enable features like permadeath, giving Battleforce a difficulty level that X-COM fans might find desirable. 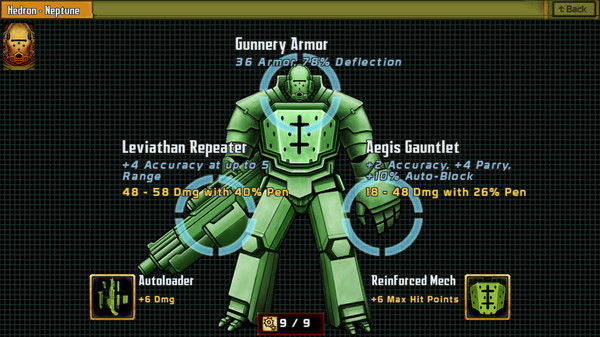 Speaking of X-COM, gear works in a similar way as opposed to your typical RPG. There are no item drops or loot, but rather new pieces of armor, weapons, and enhancements unlocked as you go down the Requisition tech tree. Each character can equip a Leviathan suit, two weapons, and two passive enhancements. Equipping a character isn’t as simple as just throwing on the best stuff you have available however, as everyone has a gear level in addition to their main level. Each piece of equipment has a certain gear cost, so you’ll normally need to decide how you want to allocate your gear level between more powerful weaponry and tougher armor, especially in the early stages of the game. In addition to your standard gear, you’ll also unlock powerful Relic gear. These unique, named pieces of gear can only be equipped on one character at a time, but often grant significant boosts over equipment of a comparable level.

One issue I have with the equipment system is that the gear isn’t quite as interesting as it could be, in my opinion. It’s all generally passive upgrades, like X% more armor or Y% more damage. Even the Relics usually just offer big percentage boosts to different stats. Maybe it’s the ARPG loot fanatic in me, but I would like to see more gear that grants unique special effects beyond just better armor or damage. 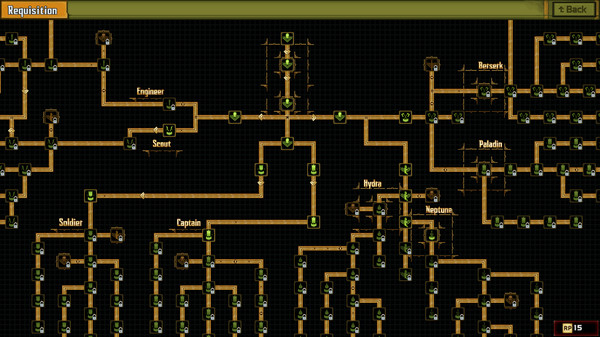 Templar Battleforce might not be visually flashy with fully voiced cutscenes like the recent Deathwatch game, but it is a good turn-based tactics title with an extensive tech tree and decent character progression. The difficulty settings are varied enough to cater to anyone, from the more casual fans of the genre up to strategy veterans prepared to see their high-level characters die permanently. The developers have also promised to continue adding new features and additions in the future, which is always a plus. You can purchase Templar Battleforce for $9.99 on Steam, iOS, and Android, which is a good price for the amount of content you’re getting if you ask me. While you’re at it, why not check out some of Trese Brothers‘ other games?

Wondering if you can run Halo Infinite on your laptop or desktop? Sure, why not? Halo Infinite has launched in open beta mode (Nov. 16, 2021) and will officially release on Dec. 8, 2021. The game is the sixth in … END_OF_DOCUMENT_TOKEN_TO_BE_REPLACED

I remember when I played my first Resident Evil. It was a gift and couldn’t wait to get it running in my old PS1. That old Capcom “this game contains scenes of explicit violence and gore” plastered on the … END_OF_DOCUMENT_TOKEN_TO_BE_REPLACED

At the beginning of one mission, you are marked for dead by the organization you work for. Your handler has no idea what happened but informs you that they are coming for … END_OF_DOCUMENT_TOKEN_TO_BE_REPLACED

If you were to bet me $20 that Amazon would be making an MMORPG at some point, I would still find some reason to not give it to you. Amazon games announced 3 new PC games to try to … END_OF_DOCUMENT_TOKEN_TO_BE_REPLACED

The Legend of Zelda: Breath of the Wild’s critical acclaim is often met with the counter of being “overrated” by some players. There are usually numerous reasons for this – both notable and ridiculous – but one of the … END_OF_DOCUMENT_TOKEN_TO_BE_REPLACED

I don’t play a lot of Apex Legends anymore. I enjoyed the game for a while, but there aren’t many games I’ve stayed with consistently over the long haul since the lost years of World of Warcraft. These days there … END_OF_DOCUMENT_TOKEN_TO_BE_REPLACED

Diehard fans of Call of Duty’s groundbreakingly successful battle royale – Warzone – have been eagerly anticipating the release of a new map for months now. … END_OF_DOCUMENT_TOKEN_TO_BE_REPLACED

The science-fiction horror game, originally released in 2008, was a massive success that influenced an entire generation of games within space/horror genre. Despite the … END_OF_DOCUMENT_TOKEN_TO_BE_REPLACED

After months of speculation regarding the release of an upgraded Switch system, Nintendo finally revealed its latest gaming system — the Nintendo Switch OLED Model. The new Switch will release on October 8, costs $349.99, and offers a long list … END_OF_DOCUMENT_TOKEN_TO_BE_REPLACED

The Legend of Zelda: Breath of the Wild’s critical acclaim is often met with the counter of being “overrated” by some players. There are usually numerous reasons for this – both notable and ridiculous – but one of the … END_OF_DOCUMENT_TOKEN_TO_BE_REPLACED