Battle Islands Review: I Dare You To Take This Island

Battle Islands is an indie title developed by DR Studios of Europe and published by 505 Games U. S. branch. Released Oct 2014, it is available to download on the PS4 and mobile currently. The studio involved is known for their understanding of social game development and a collection of critically acclaimed game titles over the last 16 years in business-these include: Risk and Monopoly Tycoon and various other titles. 505 has developed a list of titles that include Terraria, Sniper Elite III and Payday 2. With this reputation, we will look at this new offering and see how it stacks up.

Starting off this title, it is noticeable that this is a similar strategy game to those found in titles such as Boom Beach on mobile devices. Like any RTS, players will upgrade soldiers, buildings, and vehicles to defend their base and take down their computer-based opponent. Also, like other titles, this includes the use of gold to speed upgrading works on a micro-transaction system. Making the base cool and having all the right assets to do the job is the important element in these games, and players that value having the best base have the option to buy their way or use the slow route. 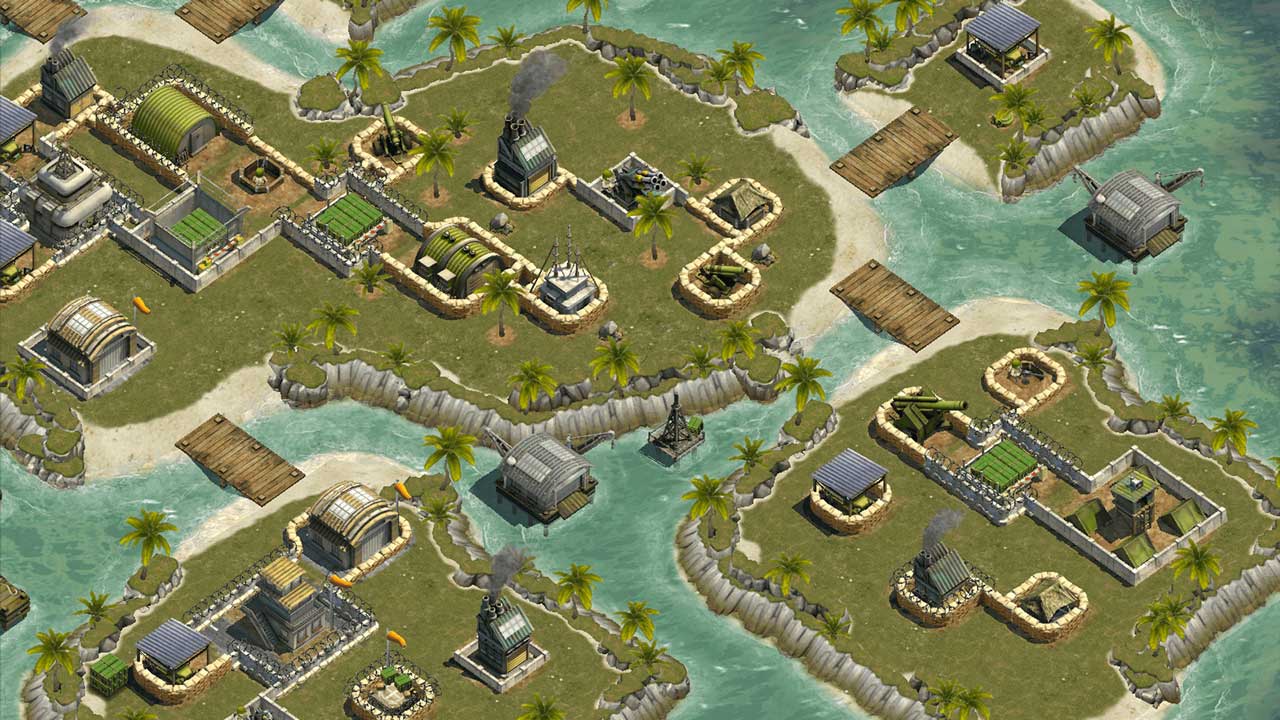 The art is done well enough for a PS4 title brought over from Mobile. The environment art is very appealing. I was also surprised by the quality of the cutscenes and character art. The music is catchy and a good addition to the game. While Battle Islands shares many traits of similar games in its genre, it adds a few unique characteristics.

First, being able to play it on the PS4 is a huge boost to the game in my book. Being able to play on my big screen TV and destroy opponents in HD made the experience a lot more gratifying. Second, with a separation of building and structure fortification from simple upgrading, players are allowed more in-depth protection of assets. Third, the most unique feature, provides players the ability to purchase additional islands and tack them on at beach fronts. Owning an island is made even better when it can be made larger, and war strategy becomes easier at that point with more defenses to protect the primary island.

Negatives found in Battle Islands are those shared by other titles like it. First, there is the nature of the micro-transaction and gold purchases for speeding gameplay and building times. This is a quick solution to cater to the impatient, but involves spending money or waiting long times for upgrades-both of which detract from full immersion as players have to leave and return again days later. Second, there is the A.I. system, the most serious problem area. The pathfinding and decisions of the A. I. in these titles lead to cases like these: While sending a group of soldiers to a point in a level, random ones shot off alone to fight a gunner or my mortar team with low health would shoot off to attack a gun tower without the others and die easily. Please, developers, give me smarter soldiers on the battlefield, thank you.

I find these genres fun despite the horrible A.I. at times, so I look forward to playing more. I just love being in the position of the God of the battlefield-all knowing and all seeing. Check out the game if you want to build an Island Empire and take over the war.

Snowfall is here and it is time to cheer! Sorry about that… As different video games pump out their holiday events, plenty get swept under the radar. If you are tired from playing the multiple FPS holiday events … END_OF_DOCUMENT_TOKEN_TO_BE_REPLACED

Amazon Prime members can get free games and free in-game content every month that last a certain amount of time. You can jump over to Amazon to sign-up for an account or navigate to the Prime Gaming section to see … END_OF_DOCUMENT_TOKEN_TO_BE_REPLACED

Do so, and you’ll probably find that T END_OF_DOCUMENT_TOKEN_TO_BE_REPLACED

I remember when I played my first Resident Evil. It was a gift and couldn’t wait to get it running in my old PS1. That old Capcom “this game contains scenes of explicit violence and gore” plastered on the … END_OF_DOCUMENT_TOKEN_TO_BE_REPLACED

At the beginning of one mission, you are marked for dead by the organization you work for. Your handler has no idea what happened but informs you that they are coming for … END_OF_DOCUMENT_TOKEN_TO_BE_REPLACED

The history of gaming isn’t that old compared to other artistic and entertainment mediums. Many people have lived through the entirety of video game history, and more people have seen most of it. As such, you’d think that the … END_OF_DOCUMENT_TOKEN_TO_BE_REPLACED

(Updated 4/18/22) Even at a time when it feels like every game is being adapted into a show or movie, the news that Twisted Metal is being turned into a TV series stands out. Why? Well, it probably has … END_OF_DOCUMENT_TOKEN_TO_BE_REPLACED

(Updated 4/15/22) The reveal of the Mortal Kombat movie trailer and news that Street Fighter characters are joining the Fortnite roster has both legendary franchises on the minds of gamers everywhere. So, it’s only natural that fans have also … END_OF_DOCUMENT_TOKEN_TO_BE_REPLACED

Snowfall is here and it is time to cheer! Sorry about that… As different video games pump out their holiday events, plenty get swept under the radar. If you are tired from playing the multiple FPS holiday events … END_OF_DOCUMENT_TOKEN_TO_BE_REPLACED

Welcome ghouls, beasts, tricksters, and every horrific being known to man. The spooky season is upon us and I figured I would indulge in the festivities in my own way. Thus, I have come up with a satirical take on … END_OF_DOCUMENT_TOKEN_TO_BE_REPLACED