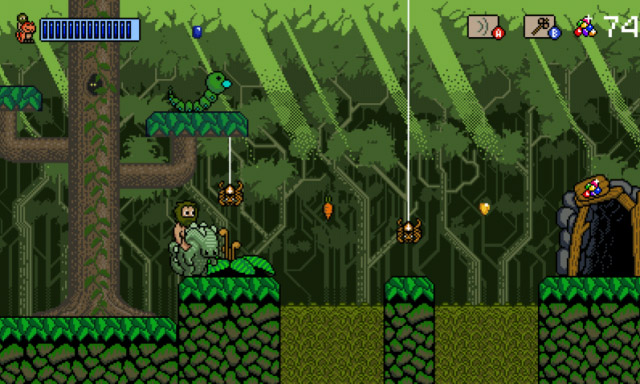 Ten years ago, if someone were to tell me I could buy an incomplete game and continually get updates for it I’d call them crazy. Now, for better or worse, it’s the norm.

I recently played Dinocide, a dinosaur-themed NES inspired platformer on Steam that’s still in beta and it really got me thinking; is it really acceptable to charge somebody for an incomplete game even if they know it? I knew going into it that the game wasn’t done, but it must have been close, right? Why else would a developer put their game up on Steam?

As I played through Dinocide, I was greeted to constant screen tearing, bizarre and completely out of place lag, and clunky controls that made me question a mass extinction couldn’t happen sooner. The more time I spent in this universe that looked like it was made in MS Paint, the more upset I became with the thought that the developer was making money off of this.

I have no doubt that Dinocide would become a good game eventually, but the state it was being sold in was FAR from acceptable. It was shoddy, filled with bugs, and serious need of playtesting. In a way, I was the playtester; the playtester who paid $10 to find bugs and be miserable for 3 hours.

Thankfully, Dinocide isn’t the gold standard of beta games. Last month, I reveled in Darkest Dungeon¸ going on expeditions for hours and enjoying myself, fully knowing the game was still early access. It was a blissful experience that only got me excited for the full game. And when I think about games like Darkest Dungeon, I so desperately want to say, “yes, this completely justifies unfinished games being released to the public,” but I simply can’t abide to that. A game NEEDS to be finished before it’s released.

If the developer wants to give players a taste of the game, they should release a demo. Demos have done plenty of good for the gaming community and have been a staple for decades. There is no reason that an early access release should take precedent over a beta release. The indie scene is constantly pumping out great concepts that the AAA studios wouldn’t even dare risk touch, but the trend of selling unfinished games is far too prevalent.

It’s understandable that a developer would want to get their product out on the market as soon as possible given the excitement that goes into making a game, but rushing a game to launch never helped anybody. Many people argue that early access isn’t a bad thing since the game will come out in full eventually and nobody is forcing you to buy it in a beta, but the fact of the matter is if something is available for sale, it should be up to standards.

No amount of updates can fix a bad first impression. Maybe two years from now Dinocide will be the defining platformer of this generation, but I’ll never be able to forget about the time it was sold for $10 and I played a blatantly unfinished game.

Snowfall is here and it is time to cheer! Sorry about that… As different video games pump out their holiday events, plenty get swept under the radar. If you are tired from playing the multiple FPS holiday events … END_OF_DOCUMENT_TOKEN_TO_BE_REPLACED

Amazon Prime members can get free games and free in-game content every month that last a certain amount of time. You can jump over to Amazon to sign-up for an account or navigate to the Prime Gaming section to see … END_OF_DOCUMENT_TOKEN_TO_BE_REPLACED

Do so, and you’ll probably find that T END_OF_DOCUMENT_TOKEN_TO_BE_REPLACED

I remember when I played my first Resident Evil. It was a gift and couldn’t wait to get it running in my old PS1. That old Capcom “this game contains scenes of explicit violence and gore” plastered on the … END_OF_DOCUMENT_TOKEN_TO_BE_REPLACED

At the beginning of one mission, you are marked for dead by the organization you work for. Your handler has no idea what happened but informs you that they are coming for … END_OF_DOCUMENT_TOKEN_TO_BE_REPLACED

The history of gaming isn’t that old compared to other artistic and entertainment mediums. Many people have lived through the entirety of video game history, and more people have seen most of it. As such, you’d think that the … END_OF_DOCUMENT_TOKEN_TO_BE_REPLACED

(Updated 4/18/22) Even at a time when it feels like every game is being adapted into a show or movie, the news that Twisted Metal is being turned into a TV series stands out. Why? Well, it probably has … END_OF_DOCUMENT_TOKEN_TO_BE_REPLACED

(Updated 4/15/22) The reveal of the Mortal Kombat movie trailer and news that Street Fighter characters are joining the Fortnite roster has both legendary franchises on the minds of gamers everywhere. So, it’s only natural that fans have also … END_OF_DOCUMENT_TOKEN_TO_BE_REPLACED

Snowfall is here and it is time to cheer! Sorry about that… As different video games pump out their holiday events, plenty get swept under the radar. If you are tired from playing the multiple FPS holiday events … END_OF_DOCUMENT_TOKEN_TO_BE_REPLACED

Welcome ghouls, beasts, tricksters, and every horrific being known to man. The spooky season is upon us and I figured I would indulge in the festivities in my own way. Thus, I have come up with a satirical take on … END_OF_DOCUMENT_TOKEN_TO_BE_REPLACED