Ender of Fire Review: A Contender For Worst Game On PS4

I went into Ender of Fire completely blind. I had never heard of this game before buying it, even though it has been out for several months now. Google wasn’t particularly illuminating either, as I could only find one review and barely any information about this title. Said review was mostly negative and from a site I have also never heard of before. The trailer looked decent and the game was 66% off so I figured why not, I’ll give it a try. Maybe Ender of Fire is an overlooked gem just waiting to be discovered, and I could tell people about how great it is by playing and reviewing it. As it turns out, some games were just meant to remain undiscovered.

After a poorly translated, multi-paragraph lore excerpt that isn’t displayed long enough for even the most adept speed-reader to get through the whole thing, you are given a choice of one of three classes and dropped into a world map without any sort of tutorial or explanation of how to play or what you are trying to do. There is a central town hub where you buy items, with three paths leading to sets of dungeons. Digging through the menus will tell you the controls and some incredibly vague basics about what the three classes (Knight, Archer, Mage) are like, but nothing is truly explained. Skills often have descriptions along the lines of “uppercuts enemies in the front of the character.” You know, really helpful stuff like that. 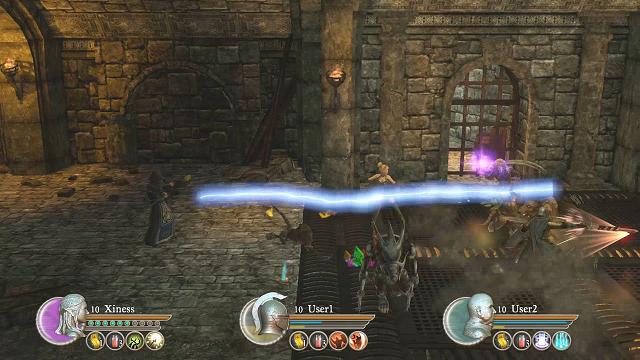 I started out with the Mage before realizing that this was all a horrible mistake. This whole experiment was doomed from the start and I wasted my $8. But I’m getting ahead of myself. Ender of Fire is an extremely simplistic side-scrolling brawler/RPG with no sense of balance in solo play, and ranged classes in particular are the path of anger and frustration. Aiming your pitiful fireball attack combo is impossible, and enemies close the distance really quickly. I often found my fireballs flying over some of the smaller enemies. You can teleport around as a form of dodging, but it doesn’t help all that much. The Mage also has a bafflingly dumb way of regenerating mana. By holding down RT, you can steal energy from nearby enemies to restore mana. This takes several seconds to fully restore your mana, during which time you must stand still, within inches of enemies, without any means of defending yourself. By contrast, the Knight restores mana each time he so much as hits an enemy.

Oh, there are health and mana items, but your inventory consists entirely of six consumable slots. There are more status effects than there are item slots, so it isn’t like you can carry a wide range of consumables for every situation. You likewise only have one slot for equipment, that being your weapon. All your special abilities are unlocked from the start because you, arbitrarily, start at level 10, and leveling up is meaningless. You don’t gain ability points and there is no way to improve or customize your character. I honestly don’t even know what leveling up does because you don’t get noticeably stronger. The game doesn’t even have loot or item drops beyond experience and gold, and the amount you have at any given time is pointlessly obfuscated. I actually genuinely thought there wasn’t a way to check your current gold reserves until I accidently clicked the right stick and saw that it tells you your gold count in tiny text above your skill/item bar. But only if you click the right stick. Because reasons. The only way to get new weapons is to buy them in town, and they are all really bland and boring.

Your attacks, regardless of class, consist of a basic three hit combo, about eight extremely boring special abilities that never get any better than what they are at the start of the game, and some form of dodge ability. And dear lord, you will want to mute your TV after only a few minutes of Ender of Fire due to the horrendous audio. Each attack has only one poorly acted grunt or line of dialogue. Aside from how frustrating it is to try and aim attacks, another part of what made playing the damn Mage so painful was hearing “Fire” or “Lightning” repeated over and over again like that one particularly infamous video about LARPing. Enemy audio is hardly any better. One particular enemy’s attack and death cries are literally just unmodified cat meows. 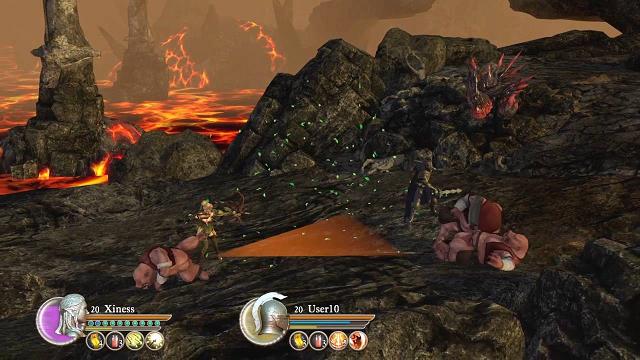 On top of combat’s many issues, the backgrounds and foregrounds have a variety of odd quirks. See, sometimes you can move into areas in the background and foreground, yet there are other areas identical to these that are just closed off by invisible walls. Not that there is any reason to go in these nooks and crannies because they often just have crates and barrels you may or may not be able to smash. Again, not that there is any point to smash these objects because nothing is ever in them. They’re just…there. Other things that are just there include random bits of decoration and terrain in the foreground that can often obscure your view in combat.

I briefly mentioned earlier that this game is very poorly balanced for solo play, and that becomes most apparent in boss fights. Two of the three bosses I’ve fought so far are nearly impossible to kill as a Knight because they have powerful melee AoE attacks that aren’t telegraphed. This one ghost boss has a stun on every single attack. The bosses also have three or four health bars to chew through, making it even more obvious that playing the game alone is pointless. Of course I couldn’t test multiplayer because no one is playing this mess of a brawler and asking friends to buy it so we could play together would result in them not being my friends anymore. Oh, and to add to the pointless difficulty is a total lack of checkpoints. You can buy these talismans in town that act as continues, but if you don’t have any then you must redo the entire dungeon again from the start.

The game’s visuals aren’t exactly a selling point either. Ender of Fire looks like something that could have been on the PS2, yet the game can’t even keep a consistent framerate. Microstutters and freezing is a common occurrence when another wave of enemies come on screen. Speaking of which, sometimes enemies will spawn by literally just falling from the sky. Textures in the background, particularly stone walls and stairs, shimmer and blur in a nauseating way whenever you start moving, and the draw distance in the backgrounds are worse than Dynasty Warriors 2. Monster designs are just as bland as the rest of the game and often highly inconsistent with each other. On one screen you’ll be fighting giant ant people and the next you might be encountering lizard-like gremlins or ghosts before going back to ant people and other giant bugs. 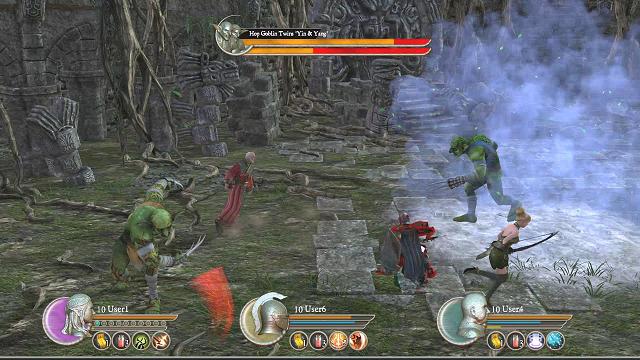 When the stars align and the game is working perfectly, the absolute best that can be said about Ender of Fire is that it is merely functional. Unfortunately, the game often isn’t working in that perfect, theoretical world, and it’s myriad of issues pile up very quickly. In the five or so hours I played Ender of Fire, I couldn’t find a single thing about it that would make me recommend this game to anyone. Boring, repetitive combat that consists of just one three hit combo with a handful of dull special abilities, combined with a complete lack of any sort of character progression, makes Ender of Fire one of the worst brawler “RPGs” I’ve ever played, and that’s without the numerous balance and technical issues. The final nail in the coffin is the ridiculous $20 price tag. You can grab Double Dragon Neon for half that price on just about every platform. Hell, the PS4 just got enhanced versions of Abyss Odyssey and Phantom Breaker. Get those instead and save yourself the frustration and boredom.

Do so, and you’ll probably find that T END_OF_DOCUMENT_TOKEN_TO_BE_REPLACED

I remember when I played my first Resident Evil. It was a gift and couldn’t wait to get it running in my old PS1. That old Capcom “this game contains scenes of explicit violence and gore” plastered on the … END_OF_DOCUMENT_TOKEN_TO_BE_REPLACED

At the beginning of one mission, you are marked for dead by the organization you work for. Your handler has no idea what happened but informs you that they are coming for … END_OF_DOCUMENT_TOKEN_TO_BE_REPLACED

The history of gaming isn’t that old compared to other artistic and entertainment mediums. Many people have lived through the entirety of video game history, and more people have seen most of it. As such, you’d think that the … END_OF_DOCUMENT_TOKEN_TO_BE_REPLACED

(Updated 4/18/22) Even at a time when it feels like every game is being adapted into a show or movie, the news that Twisted Metal is being turned into a TV series stands out. Why? Well, it probably has … END_OF_DOCUMENT_TOKEN_TO_BE_REPLACED

(Updated 4/15/22) The reveal of the Mortal Kombat movie trailer and news that Street Fighter characters are joining the Fortnite roster has both legendary franchises on the minds of gamers everywhere. So, it’s only natural that fans have also … END_OF_DOCUMENT_TOKEN_TO_BE_REPLACED

In 2020 it was revealed developer IO Interactive was working on a James Bond game known as Project 007 which, understandably, shook the video game world. Still in production, there’s a possibility that their James Bond game could be the … END_OF_DOCUMENT_TOKEN_TO_BE_REPLACED

The history of gaming isn’t that old compared to other artistic and entertainment mediums. Many people have lived through the entirety of video game history, and more people have seen most of it. As such, you’d think that the … END_OF_DOCUMENT_TOKEN_TO_BE_REPLACED

30+ years on, there’s somehow nothing quite like an NES action game. From the soundtracks to the level design and airtight mechanics, classic NES games like Ninja Gaiden and Mega Man remain some of the absolute best the medium … END_OF_DOCUMENT_TOKEN_TO_BE_REPLACED