Enter the Gungeon is a roguelike game that sees you take control of a group of colorful characters who pack enough weapons to declare themselves a sovereign nation. Like many roguelike games, the objective is to make your way through a randomly generated series of rooms, use random weapons and defeat random enemies. If you die, your game is done. 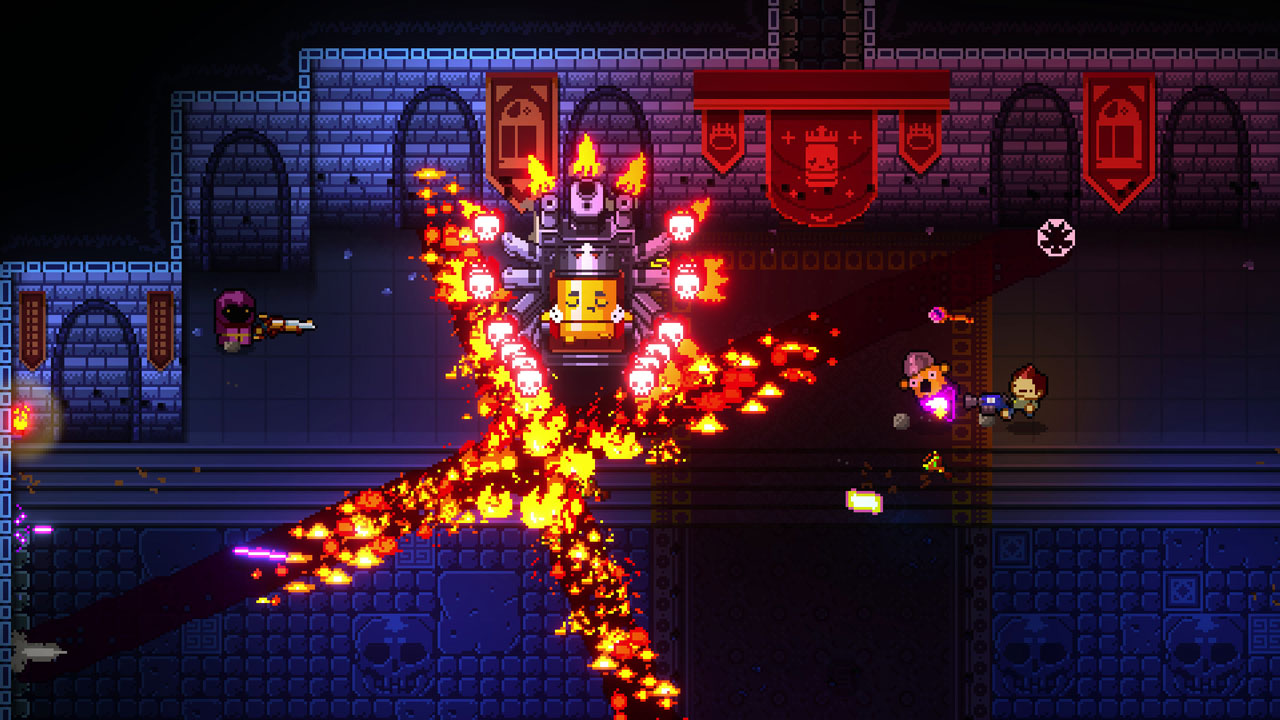 Unlike many roguelike games, this one is much more action-based meaning that your success isn’t as dependent on luck. Don’t take that to mean that Gungeon will be easy, however, as it is modeled after the bullet hell genre. What that means is that every enemy will greet you with a wave of bullets that fill the screen. The chaos in your average session is simply tremendous, and the best stuff is appropriately reserved for the game’s boss battles.

Helping you along the way is the aforementioned arsenal of creative weapons, as well as a useful dodge-roll ability and some special items. You’ll also be able to flip over tables for cover, and take advantage of rare merchants who will be all too happy to trade their wares for the bullet currency you pick up along the way. 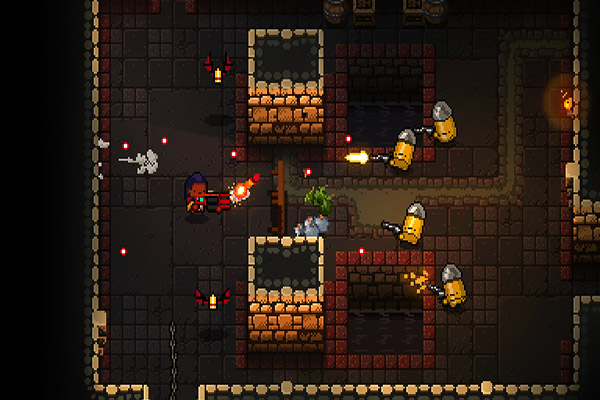 Unfortunately, much of the game’s action is hindered by the targeting system. The aiming in Gungeon is far too loose, making it difficult to target your enemies and properly engage in the action. Where this really becomes a problem is in the game’s randomized weapon system. Machine guns and explosives are your best bet to combat the lack of precision aiming, while anything else presents more of a risk to you than to your enemies.

Speaking of your enemies, their design is something of a letdown as well. Most either resemble some kind of ammunition or a generic dark fantasy creature. There’s little variety to be found among them, which is disheartening considering that the music and effects of the game set the presentation bar pretty high. It should be noted that the boss designs are exceptional, however.

As it stands, it’s hard to recommend Enter the Gungeon over the kings of the genre such as Nuclear Throne and The Binding of Issac. Should a patch come along to fix the wonky aiming, then it will be a lot easier to appreciate the beautiful chaos this game creates. For now, this one should be cautiously downloaded by genre fans looking for a new fix.

Wondering if you can run Halo Infinite on your laptop or desktop? Sure, why not? Halo Infinite has launched in open beta mode (Nov. 16, 2021) and will officially release on Dec. 8, 2021. The game is the sixth in … END_OF_DOCUMENT_TOKEN_TO_BE_REPLACED

I remember when I played my first Resident Evil. It was a gift and couldn’t wait to get it running in my old PS1. That old Capcom “this game contains scenes of explicit violence and gore” plastered on the … END_OF_DOCUMENT_TOKEN_TO_BE_REPLACED

At the beginning of one mission, you are marked for dead by the organization you work for. Your handler has no idea what happened but informs you that they are coming for … END_OF_DOCUMENT_TOKEN_TO_BE_REPLACED

If you were to bet me $20 that Amazon would be making an MMORPG at some point, I would still find some reason to not give it to you. Amazon games announced 3 new PC games to try to … END_OF_DOCUMENT_TOKEN_TO_BE_REPLACED

The Legend of Zelda: Breath of the Wild’s critical acclaim is often met with the counter of being “overrated” by some players. There are usually numerous reasons for this – both notable and ridiculous – but one of the … END_OF_DOCUMENT_TOKEN_TO_BE_REPLACED

I don’t play a lot of Apex Legends anymore. I enjoyed the game for a while, but there aren’t many games I’ve stayed with consistently over the long haul since the lost years of World of Warcraft. These days there … END_OF_DOCUMENT_TOKEN_TO_BE_REPLACED

Diehard fans of Call of Duty’s groundbreakingly successful battle royale – Warzone – have been eagerly anticipating the release of a new map for months now. … END_OF_DOCUMENT_TOKEN_TO_BE_REPLACED

The science-fiction horror game, originally released in 2008, was a massive success that influenced an entire generation of games within space/horror genre. Despite the … END_OF_DOCUMENT_TOKEN_TO_BE_REPLACED

After months of speculation regarding the release of an upgraded Switch system, Nintendo finally revealed its latest gaming system — the Nintendo Switch OLED Model. The new Switch will release on October 8, costs $349.99, and offers a long list … END_OF_DOCUMENT_TOKEN_TO_BE_REPLACED

The Legend of Zelda: Breath of the Wild’s critical acclaim is often met with the counter of being “overrated” by some players. There are usually numerous reasons for this – both notable and ridiculous – but one of the … END_OF_DOCUMENT_TOKEN_TO_BE_REPLACED