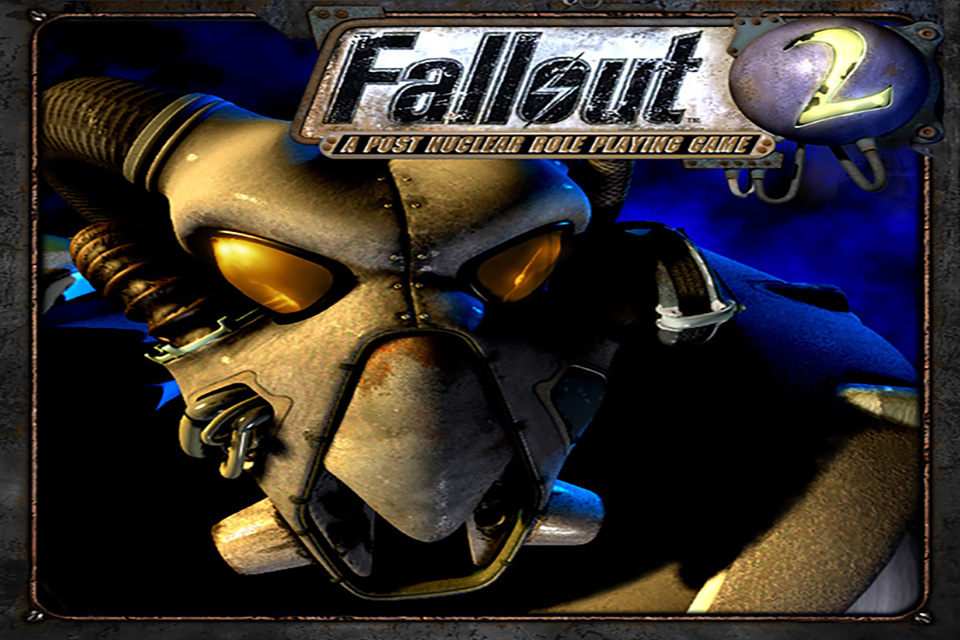 With the release of Fallout 4 and my love for the series reaching an all-time high, I decided to take a trip back into gaming’s past. Before the excellent presentation at E3 in 2015, before the years of wild speculation and waiting, before Bethesda even came to own the series, Fallout was a different beast. Way back in 1997, Interplay Studios would go to release Fallout, a successor of sorts to their previous title Wasteland. But this Fallout was far different from the games we associate with the series today. You don’t have 3D graphics allowing you to vividly see the details of the crumbling Capital Wasteland, or experience the scramble as you tried aiming your energy pistol at charging raiders. Instead, Fallout and its sequel resembled many older PC games. You have 2D isometric graphics with the rare occurrence of, for its time, highly detailed cutscenes to introduce some of the grander story elements. And instead of battles waging in real time, you are forced to be strategic through turn-based combat revolving around your action points. It was completely different. Yet as I revisited Fallout 2 to pass the time before Fallout 4 launched, I was reminded that war, war never changes—and neither does Fallout.

Starting off with what was immediately different from my past experiences with Fallout, the gameplay and controls differ greatly. Players are given a bird’s eye view of the area, seeing the very passable visuals of your surroundings and any mutated creatures lurking about. Roofs cut off to let the player see inside houses and side rooms, though the locked camera can be sketchy when up against a wall. Detail wise, Black Isle does a splendid job at filling up spaces with believable set pieces like dead tree carcasses and tearing wallpaper. The color palate in the game even varies more than Fallout 3 with its distinct red bricks and iridescent radioactive waste. The few characters that do have fully animated faces in the game when you speak with them, like the village elder, do a great job at capturing the rough tone in their crude appearances. The cutscenes that help move the story along are also enjoyable, especially the intro with the more than unsettling opening of a vault. Even with its limited graphics, it was easy to believe in the world in front of me and see the care put forth to making it come alive.

The game controls primarily through the mouse and using some of the UI for more intricate actions. To move around the wasteland, you right click and select the tile you wish to travel to before left clicking. Clicking the left mouse button again causes you to sprint. Along with movement, you’re allowed to look at and interact with any object in the world by doing the same actions, except when the golden cursor is displayed. This allows you to not only get a good description of a building or individual by looking at them, but also the ability to search through vases or other containers. You’ll immediately need to slow yourself down for easier control if you’re used to faster paced gaming, something that took me a bit of time at first as I got frustrated with not hovering over the correct space to interact with a door. This adjustment will also come in handy in terms of combat and getting the most out of your experience. Once you do take it down a notch, you’ll find interacting with multiple objects in a space easy and movement second nature. 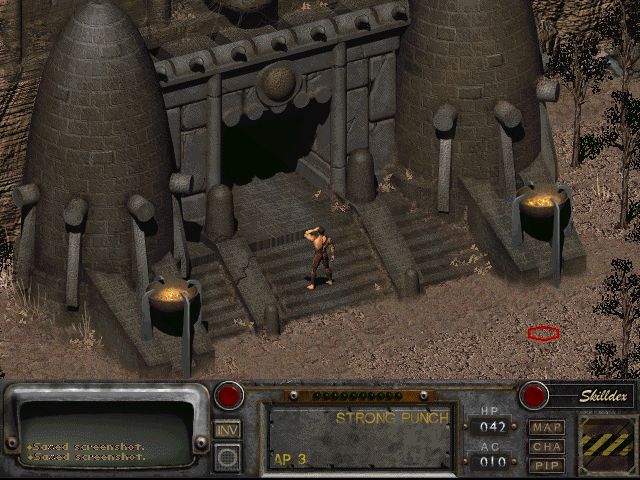 To do more of the more complex actions, such as using a specific equipped weapon to attack an enemy or lock pick a door, you will have use the game’s UI at the bottom of the screen. This UI is presented in a thematically sound way, having the overall appearance of a Pip-Boy, but does have some flaws. While many of its buttons, like map and inventory, are easily understood, the Skilldex in particular eluded me for a short time. In my first try at the game, I became stuck at the first appearance of a locked door. After acting upon the door with no success, I assumed I had to find a key—only to find there was no key on any of the corpses or in any of the containers in that area. It was only after a few minutes of messing around aimlessly did I open the Skilldex and realize I had to select lock picking and move the cursor over the door to unlock it. While I just assumed the skill would automatically be activated in the given scenario, a pop-up or small introduction to the Skilldex and its many skills would’ve been greatly appreciated. That being said, the lack of a tutorial and its difficulty fits in with the games’ harsh tone.

You will quickly realize Fallout 2 is a difficult game. You can’t run through, killing every enemy as you go with ease. The first level, a temple, will make that clear to you. Starting off with your bare fists or a spear, the player will encounter hardships upon every battle with a giant ant or scorpion, especially if they didn’t start off with a good character build. Combat is turn-based, initiated when you sneak up on an enemy or they spot you. It’s then each of your stats play a huge part in how that fight goes, with things like agility determining the available action points and individual skills like unarmed figuring in to how much damage you’ll deal. Action points are key as they control what actions you may take during your turn, such as moving position to escape a group of bandits surrounding you or slamming your crowbar into a gecko. Even actions like switching your weapon take up action points. Each of these actions cost a certain amount of action points, leaving it up to you in how you’d like to use them. Do you use all your points in attacking twice, or do you attack them once and then reposition out of the enemy’s range? This brings a form of strategy similar to titles like Fire Emblem into the game and make you think before you act. It was a welcome change for me, as I found myself trying to make the most out of each turn and taking time to think about my next move.

If you don’t take caution during combat and expect yourself to one-shot foes easily, you’re in for a bad time. Saving before every encounter is highly recommended for a reason. You’re going to see your attacks miss and your damage ranging greatly depending on your weapon. There were times I whiffed multiple hits in a row while the enemy hit me every time. It’s a difficult system, one that will lead to MANY deaths on your part if you aren’t careful. It took me a long time to get used to the combat and the overall difficulty of the game, along with plenty of times I got frustrated with my failures. And yet, I never gave up on the game for one specific reason: the story.

While combat and visuals are very different from the Fallout I fell in love with, its story, characters, and atmosphere are not. Everything I came to love about Fallout 3 and New Vegas through its intriguing retro futuristic setting to its dark humor still exists in Fallout 2. Easter eggs referencing pop culture also litter the game for you to find and enjoy, providing a great incentive to explore. The bleak atmosphere of the wasteland, one in which people are experimented and tortured through forced mutation, still retains callbacks to the very real issues plaguing a normal America. The very first settlement you’re sent to, Klamath, is filled with people that look down upon your people and see you as primitive, aligning to the treatment of Native Americans. These concurring issues in such a drastic setting, offering commentary and insight to a player, are so unique to this series filled with questions about morality and decisions. And player decision still exists in the older games, allowing you to use that silver tongue to get out of sticky scenarios if you put points into your charisma. While maybe not as monumental as the decisions given to you in future entries of the series, the player is allowed to play the game as they like. The only time I questioned said freedom is that starting level that require you have some skill in melee weapons or unarmed combat to defeat the creatures. Other than that, the tone of the game and the setting will be familiar to any fan of the series.

Though the visuals may be vastly different from the more recent entries, and combat is more focused on strategy than action, Fallout 2 remains to be a Fallout game through its story and atmosphere. With its great attention to detail in its visuals and written descriptions, as well as its challenging gameplay, I believe Fallout 2 more than earns just your attention. You will struggle at first, even grow frustrated, but once you get the hang of it, you will find a wonderful land of post-nuclear apocalypse to explore.

– Funny easter eggs and even some dark humor.

– Combat that makes you play smart and engage in strategy.

– Good visuals that stand up as passable even today.

– Difficulty can cause frustration.

– Lack of tutorial can leave you confused about certain aspects or features of the game.

Four years ago, Doom had nothing to lose and everything to gain. The perception of the series after Doom 3’s mediocre release and the franchise’s subsequent hiatus left few people even looking for another game in the series. However, id … END_OF_DOCUMENT_TOKEN_TO_BE_REPLACED

Recently, I finished Rage 2.  I set out in the game with the hope that it would deliver something reminiscent of the magnificence of Doom while drawing some of the enjoyable open-world aspects of an Avalanche developed game.  I … END_OF_DOCUMENT_TOKEN_TO_BE_REPLACED

PlayStation Now sounded like a pretty exciting service when it was first revealed in 2014. At the very least, it offered … END_OF_DOCUMENT_TOKEN_TO_BE_REPLACED