Game of Thrones: The Game Continues and Story Unfolds 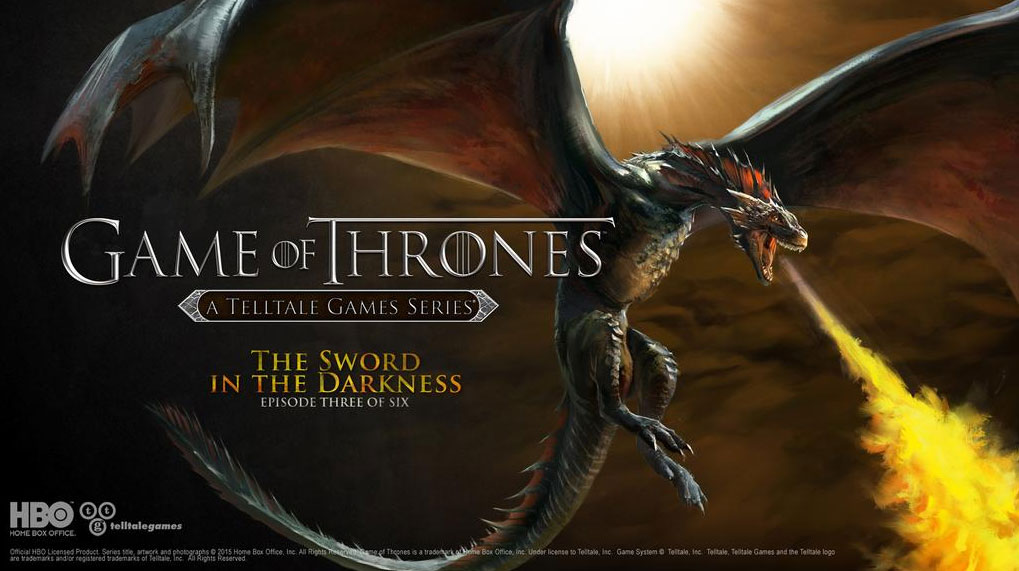 Game of Thrones – A Telltale Games Series: The Sword in the Darkness from Telltale Games is the third installment in the video game adaptation of George R. R. Martin’s fantasy masterpiece, “A Song of Ice and Fire.” Returning to the series after having previously reviewed the first episode and finishing the second, I can confidently say this episode continues to reinforce my love for the game and show. It must be that feeling I get from the beginning intro sequence that bellows out the main theme while panning across the Seven Kingdoms and harking to a tale I have yet to experience.

Episode three continues to unfold the dramatic tale of the members of House Forrester from the first two episodes. The noble children and players have endured a continuous onslaught of difficult choices that challenge character. Through a divergent narrative, players are guided back and forth among the stories of Rodrik at Ironrath, Gared at the Wall, Mira in King’s Landing, and finally Asher in the lands of Essos. Players help shape the fates of each member to an ultimate goal of survival and regaining the House and domain of Ironrath. Remember the call, Iron from Ice.

Telltale continues to push dramatic storytelling and tough, story-altering decisions, and the vision of “Game of Thrones” shines. Some of these truly made me stop and pause. For example, in one scenario, Rodrik Forrester (the player) is convinced to promise to let an opposing family trample on their house in order to lock in long-term peace; a measure that forces him and players to lay aside their ego despite being pushed around multiple times and having to purposefully remain on the ground after being kicked to look weak in front of others. Situations like this one are a trademark style from Telltale that push my emotional boundaries. My approach is simple – play the nice pushover initially and then mete out my vengeance next time through the game.

With the original cast ever present through their contributions of voice talents and acting, Telltale puts players in situations where they may find themselves at odds with Margaery or making the choice to kiss Cersei’s feet to get by, while at the same time being told not to hang out with Tyrion. What a difficult choice. Who doesn’t want to hang out with Tyrion and drink wine with one of the better choices for an ally in Kings Landing? These are not easy choices.

The great story and gameplay are once again pushed through by Quicktime and video sequences. I mentioned before there is the debate regarding whether there is too little gameplay in Telltale’s games. The focus should be on how Telltale employs their talents of simplified interactions to provide a hybrid of intensely beautiful and linear game stories. Telltale’s rendition of “Game of Thrones” provides players the ability to control their fate as a member of this wonderful universe. This is what I look for and wonder if you are willing to see what fate has in store for you in Westeros and Essos?

Four years ago, Doom had nothing to lose and everything to gain. The perception of the series after Doom 3’s mediocre release and the franchise’s subsequent hiatus left few people even looking for another game in the series. However, id … END_OF_DOCUMENT_TOKEN_TO_BE_REPLACED

Recently, I finished Rage 2.  I set out in the game with the hope that it would deliver something reminiscent of the magnificence of Doom while drawing some of the enjoyable open-world aspects of an Avalanche developed game.  I … END_OF_DOCUMENT_TOKEN_TO_BE_REPLACED

PlayStation Now sounded like a pretty exciting service when it was first revealed in 2014. At the very least, it offered … END_OF_DOCUMENT_TOKEN_TO_BE_REPLACED