Having heard of the game previously, I was interested in getting my hands on this Kickstarter Alpha demo provided to backers to delve into a horror title. Grave is built to support Oculus Rift functionality, and while it might certainly heighten the fear factor I was not able to experience the game through the rift. Instead, I played through the game on the more common platform, my PC. For those not familiar with the Oculus Rift device, it is described on Google as “a new virtual reality headset that lets players step inside their favorite games and virtual worlds”-a boost to the immersion felt by players.

Even without an Oculus Rift, I had no problems getting immersed into the game’s isolated and eerie atmosphere. My first impression of the storyline is one of curiosity. The first interaction with the game places the player in a barren wasteland with only a door in the near distance with a red paper nailed to it. Thinking there must be another way to go, I tried, but I had to go take the paper-after all it was red. Clicking this paper reveals muted and mysterious voices, and voices such as these are a part of the sound effects found in the game triggered by certain areas and actions. With the beautifully crafted landscape and the wind effects on the grass, there is a real sense of ambience to the level. Walking through the door I was jolted awake as the ground fell to a lower entrance for an abandoned township. 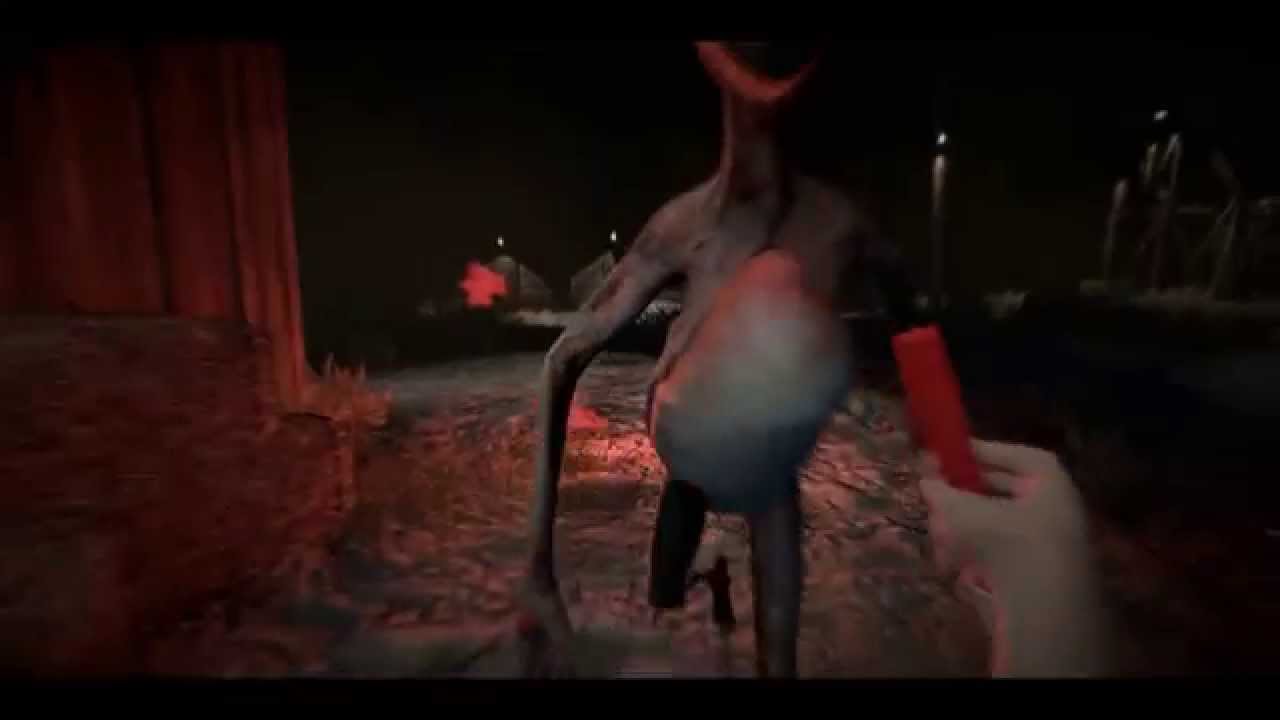 In this new area I found matches, gas, and other light sources that proved to be quite valuable, as I found when the world turned dark and scary creatures afraid of light began attacking me from everywhere. The real-time effect of passing from night to day makes exploration difficult since players must get to a safe place when night comes. This forces memorization of light sources. Playing in this day and night cycle, the game pushed me to devise a strategy of seeking a safe place, and then obtaining items in the light while returning safely before dark. This added a real sense of urgency and intensity to gameplay as I found myself stopping to reassess where the sun was in the sky to know if I would have enough time to make it back alive. While exploring the world of Grave, I activated certain triggers to reveal glimpses of what happened in that world through flashbacks of people and recordings.

The gas can comes in handy as you maneuver about the level seeking objects to dose with gas and ignite in order to progress further. Getting my hands on this gas can I found myself filling up at the fuel station and catering to my pyro game tendencies of setting everything on fire to see what would burn. Fortunately, the level did not burn down around me.

Interestingly, the game’s use of the light vs. dark and good vs. evil themes become mechanics similar to games like Amnesia and Alan Wake that add to the intensity and scariness of the game. One of the main ways of truly surviving in the game, this mechanic taps into the natural fear of the dark and unknown I find myself still having at times.

The game demo only suffers from a few problems to be expected in an alpha build: some glitches in movement, the player cannot climb up one of the ladders, the contact of a match thrown onto a puddle of gasoline is not always accurate. One suggestion I have is to have some random AI that are able to reach a player’s safe zone by climbing ladders, as I found myself just camping out at night till morning and that took away the fear I should feel in the level.

This game demo shows the potential Grave has up until the end which leaves me wanting the full story. Check out the game website and those wishing to support the game with donations can do so there through PayPal. 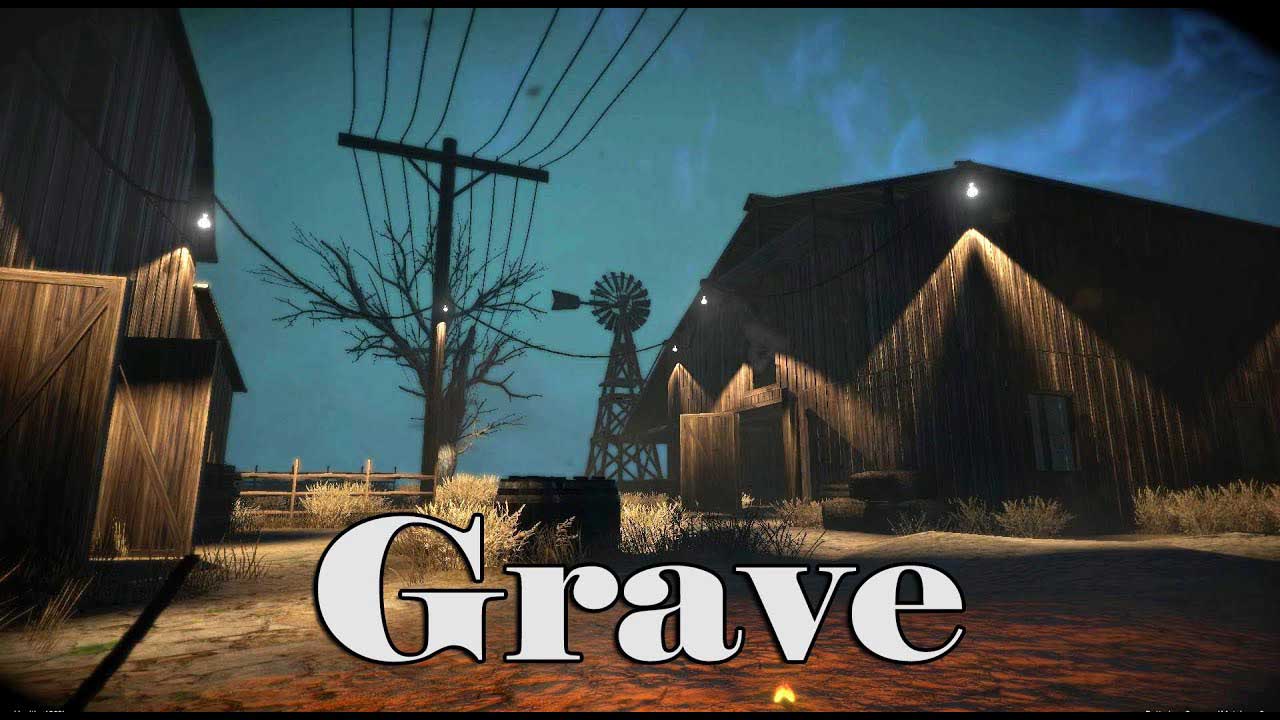 Snowfall is here and it is time to cheer! Sorry about that… As different video games pump out their holiday events, plenty get swept under the radar. If you are tired from playing the multiple FPS holiday events … END_OF_DOCUMENT_TOKEN_TO_BE_REPLACED

Amazon Prime members can get free games and free in-game content every month that last a certain amount of time. You can jump over to Amazon to sign-up for an account or navigate to the Prime Gaming section to see … END_OF_DOCUMENT_TOKEN_TO_BE_REPLACED

Do so, and you’ll probably find that T END_OF_DOCUMENT_TOKEN_TO_BE_REPLACED

I remember when I played my first Resident Evil. It was a gift and couldn’t wait to get it running in my old PS1. That old Capcom “this game contains scenes of explicit violence and gore” plastered on the … END_OF_DOCUMENT_TOKEN_TO_BE_REPLACED

At the beginning of one mission, you are marked for dead by the organization you work for. Your handler has no idea what happened but informs you that they are coming for … END_OF_DOCUMENT_TOKEN_TO_BE_REPLACED

The history of gaming isn’t that old compared to other artistic and entertainment mediums. Many people have lived through the entirety of video game history, and more people have seen most of it. As such, you’d think that the … END_OF_DOCUMENT_TOKEN_TO_BE_REPLACED

(Updated 4/18/22) Even at a time when it feels like every game is being adapted into a show or movie, the news that Twisted Metal is being turned into a TV series stands out. Why? Well, it probably has … END_OF_DOCUMENT_TOKEN_TO_BE_REPLACED

(Updated 4/15/22) The reveal of the Mortal Kombat movie trailer and news that Street Fighter characters are joining the Fortnite roster has both legendary franchises on the minds of gamers everywhere. So, it’s only natural that fans have also … END_OF_DOCUMENT_TOKEN_TO_BE_REPLACED

Snowfall is here and it is time to cheer! Sorry about that… As different video games pump out their holiday events, plenty get swept under the radar. If you are tired from playing the multiple FPS holiday events … END_OF_DOCUMENT_TOKEN_TO_BE_REPLACED

Welcome ghouls, beasts, tricksters, and every horrific being known to man. The spooky season is upon us and I figured I would indulge in the festivities in my own way. Thus, I have come up with a satirical take on … END_OF_DOCUMENT_TOKEN_TO_BE_REPLACED