It’s no secret that roguelike elements are making their way into pretty much every genre these days, and Heavy Bullets by Terri Vellmann and Devolver Digital is the latest in a growing number of procedurally-generated permadeath labyrinth shooters. There is also Tower of Guns, Paranautical Activity, Rogue Shooter, and Ziggurat. I guess you could kind of count Receiver as an FPS roguelite as well. It’s an emerging genre that isn’t exactly hurting for games, but while most of these titles focus on fast-paced twitch shooting reminiscent of old school classics like Doom and Quake, Heavy Bullets is a much slower, more methodical brand of shooter. Unfortunately, it also has a lot in common with Receiver in the sense that it feels like a prototype designed to pitch a game that is still early in its development cycle.

The basic idea of Heavy Bullets is that you have a single revolver with only six bullets, but you can pick up your bullets and reuse them. Additional ammo is usually pretty scarce, but even though you can’t really run out of ammo in the long run, a careless trigger finger can easily leave you defenseless during an engagement. The maze-like design of the levels also ensures that many of your encounters are at close range, leaving you only a few opportunities to try and pick off enemies from a distance. 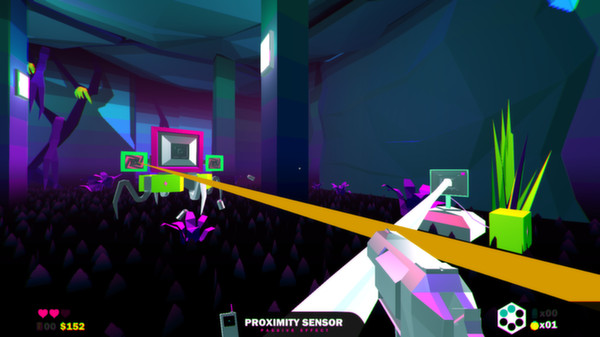 In addition to your gun there are also bombs and various items, both active and passive. You can only carry one item by default, and they consist of various potions, knives or pickaxes that give you a melee attack, single-use rockets, mines, boots that increase movement speed, and more. You’ll also find banks that can be used to store money and items for future runs, and they also sell last wills and insurance policies that give your next attempt a bit of extra cash at the start.

This does make Heavy Bullets slightly more forgiving than most roguelites, though not by much. Expect many enemies designed to blend into the game’s absurdly bright environments. There is also a particularly frustrating bug in the game that was introduced by the last patch that allows enemies to pass through some walls and obstacles. The developer is aware of the problem, but as of the time of writing there isn’t a fix yet. While he is at it, I’d also really like it if he changed the way the screen pulses when you are low on health. When combined with the game’s bright environments it often gives me a headache, making me hope for a mob to come kill me just so I can get the damn screen to stop blinking.

While Heavy Bullets does have a lot of intriguing ideas on display, it suffers from what you’d expect of a game with only one core weapon: it gets boring. There is just a lack of content in general in the game. The various items don’t really do enough to vary up the combat, and the game just doesn’t do enough with the idea of recycling bullets from a low capacity firearm. Like I said in my opening paragraph, Heavy Bullets feels like a prototype, a proof of concept designed to pitch a game to potential investors or Kickstarter backers. 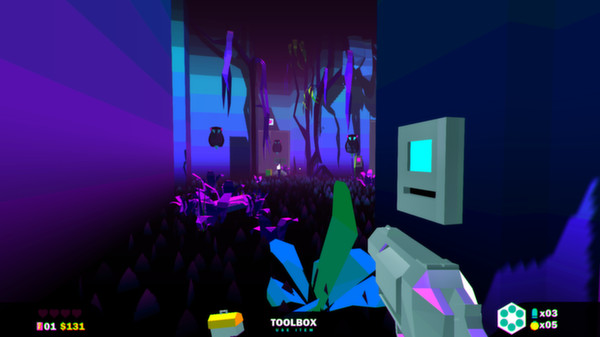 Heavy Bullets is by no means a bad game, it just doesn’t have enough content to guarantee the long-term replay-ability of most other roguelites out there. I don’t see the average player sticking with the game once they finally do complete all 8 levels. The core mechanics involving a revolver that shoots bullets that can be picked up and reused is cool and leads to some wonderfully tense moments, but the game doesn’t do enough with the idea. I’d like to see more types of guns that utilize the reusable bullets mechanic, and more items that have a large enough impact to really shake things up. It does offer a rather unique take on roguelite shooters that you can’t get in games like Rogue Shooter or Tower of Guns, which makes the general lack of content all the more disappointing. Heavy Bullets is only $10 though, so it isn’t so expensive that I wouldn’t recommend at least checking it out at some point. You can currently find the game on Steam.

Snowfall is here and it is time to cheer! Sorry about that… As different video games pump out their holiday events, plenty get swept under the radar. If you are tired from playing the multiple FPS holiday events … END_OF_DOCUMENT_TOKEN_TO_BE_REPLACED

Amazon Prime members can get free games and free in-game content every month that last a certain amount of time. You can jump over to Amazon to sign-up for an account or navigate to the Prime Gaming section to see … END_OF_DOCUMENT_TOKEN_TO_BE_REPLACED

Do so, and you’ll probably find that T END_OF_DOCUMENT_TOKEN_TO_BE_REPLACED

I remember when I played my first Resident Evil. It was a gift and couldn’t wait to get it running in my old PS1. That old Capcom “this game contains scenes of explicit violence and gore” plastered on the … END_OF_DOCUMENT_TOKEN_TO_BE_REPLACED

At the beginning of one mission, you are marked for dead by the organization you work for. Your handler has no idea what happened but informs you that they are coming for … END_OF_DOCUMENT_TOKEN_TO_BE_REPLACED

The history of gaming isn’t that old compared to other artistic and entertainment mediums. Many people have lived through the entirety of video game history, and more people have seen most of it. As such, you’d think that the … END_OF_DOCUMENT_TOKEN_TO_BE_REPLACED

(Updated 4/18/22) Even at a time when it feels like every game is being adapted into a show or movie, the news that Twisted Metal is being turned into a TV series stands out. Why? Well, it probably has … END_OF_DOCUMENT_TOKEN_TO_BE_REPLACED

(Updated 4/15/22) The reveal of the Mortal Kombat movie trailer and news that Street Fighter characters are joining the Fortnite roster has both legendary franchises on the minds of gamers everywhere. So, it’s only natural that fans have also … END_OF_DOCUMENT_TOKEN_TO_BE_REPLACED

Snowfall is here and it is time to cheer! Sorry about that… As different video games pump out their holiday events, plenty get swept under the radar. If you are tired from playing the multiple FPS holiday events … END_OF_DOCUMENT_TOKEN_TO_BE_REPLACED

Welcome ghouls, beasts, tricksters, and every horrific being known to man. The spooky season is upon us and I figured I would indulge in the festivities in my own way. Thus, I have come up with a satirical take on … END_OF_DOCUMENT_TOKEN_TO_BE_REPLACED