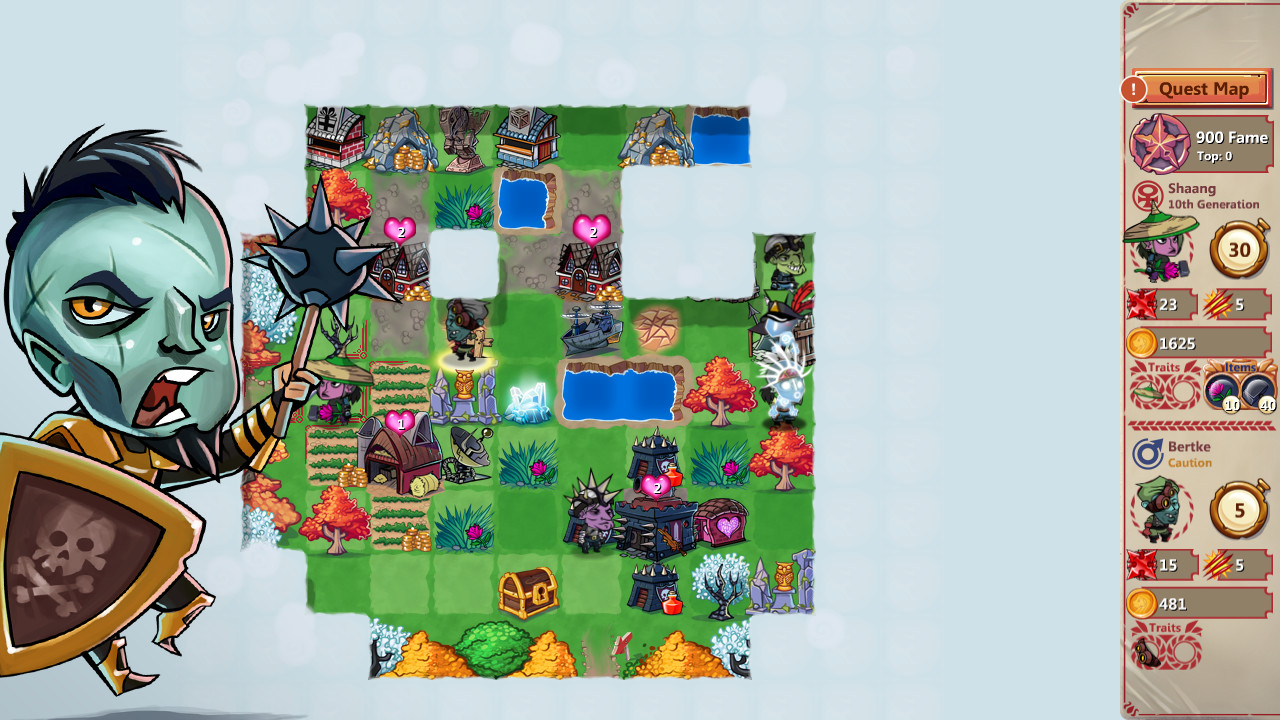 Taking a few cues from Rogue Legacy, Hero Generations is a roguelikelikelite that focuses on building a lineage of famous adventurers and monster slayers. Unlike Rogue Legacy though, Hero Generations is a bit closer to a true roguelike in terms of mechanics, using a pseudo-turn-based system where enemies only move when you do and combat comes in the form of ramming your face against things until one of you dies. It has a lot of solid concepts going for it, but the way Hero Generations sometimes implements those ideas can be frustrating and way too reliant on RNG.

Starting with nothing, it’s your goal to explore the map and gather as much fame and fortune as you can before finding a partner to settle down with. Each character has a life expectancy, which is a combination of the number of turns you have left before you die and your health bar. Upgrading towns with various structures, finding or buying items that can be passed down as heirlooms, slaying monsters, discovering new areas, and more all contribute to your chances of finding a mate and producing a strong legacy, but waiting too long to mate can result in penalties that decrease the chances of passing on desirable traits. Worse, getting too greedy always comes with the chance of running out of time and dying before you can produce offspring. There is a lot of risk/reward inherent in just about anything you do in Hero Generations.

Potential partners will appear in towns, and you can construct buildings that increase the chances of “rare” mates with more desirable traits to appear. Once you’ve found someone to settle down with, you get a chance to flip a number of cards based on how many years you and your mate have left to live. These are the traits that will get passed down to your child, along with any items you had equipped. Then, sixteen years pass and you assume control of your child to continue with your quest.

While the whole meta game of building up your legacy has a good amount of strategy involved, the actual process of killing monsters is entirely reliant on literal dice rolls. Once you encounter an enemy, combat involves just clicking a button to roll some dice and see who has the higher number. The number you can roll is dependent on your strength stat, so a character with 30 strength can roll anywhere between 0 and 30. Items like swords will add an extra dice roll that modifies your final roll to give you a better chance at winning, but it is still just totally random dice rolls. Meticulous preparations and carefully laid plans can easily be unraveled by losing multiple battles to low level enemies due to bad RNG. For a game that has so many quests focused on killing monsters, it’s a shame that the combat mechanics are the weakest part.

There are other clunky mechanics to wrestle with in Hero Generations, most notably how enemies and items can “stack” on a tile. You can only have two items at any given time, and the process of dropping an item to pick up a new one used to be a fiddly nightmare that had to be plotted out over the course of several turns. Luckily, a very recent patch has since added a little sub menu that makes dropping and picking up specific items easier, but there are still issues when it comes to trying to buy new items from a shop when you have a full inventory. What the patch didn’t fix, however, is the “stacking” of enemies on a single tile. It’s possible for a high level enemy to by hidden underneath a low level one, dropping you into a fight that is impossible to win when you expected some easy experience. The simplest solution would be to just not allow multiple enemies to occupy a single tile, but as of right now this is still an issue.

There are a few technical issues to be aware of as well. Hero Generations lacks a full screen mode, and the resolution options are fairly lackluster. It’s a minor nitpick, but could be an issue for gamers with larger displays. I’ve also seen some people complaining about the game not saving properly, or save files being corrupted. I actually had major issues related to this when the game first came out and was unable to play Hero Generations at all for nearly a week. This problem has since been resolved, but some people are still encountering issues, so that’s something to keep in mind.

Despite some technical issues, occasionally clunky mechanics, and horrible combat, the process of building up your legacy can be fairly compelling. I certainly had fun building up towns and exploring the world. The core mechanics are very simple with a decent amount of strategic depth to be found in trying to figure out the optimal use of your character’s limited lifespan. Hero Generations has the strong risk/reward gameplay loop that many fans of the genre find so compelling, but ultimately your enjoyment of the game will come down to how much tolerance you have for extremely random combat mechanics. Hero Generations brings some great ideas to the roguelike genre, it’s just a shame that some of those ideas weren’t implemented a bit better. At only $15 it’s certainly cheap enough to give a shot if you are a fan of the genre looking for some fresh ideas. You can currently find Hero Generations on Steam and the Humble Store.

Snowfall is here and it is time to cheer! Sorry about that… As different video games pump out their holiday events, plenty get swept under the radar. If you are tired from playing the multiple FPS holiday events … END_OF_DOCUMENT_TOKEN_TO_BE_REPLACED

Amazon Prime members can get free games and free in-game content every month that last a certain amount of time. You can jump over to Amazon to sign-up for an account or navigate to the Prime Gaming section to see … END_OF_DOCUMENT_TOKEN_TO_BE_REPLACED

Do so, and you’ll probably find that T END_OF_DOCUMENT_TOKEN_TO_BE_REPLACED

I remember when I played my first Resident Evil. It was a gift and couldn’t wait to get it running in my old PS1. That old Capcom “this game contains scenes of explicit violence and gore” plastered on the … END_OF_DOCUMENT_TOKEN_TO_BE_REPLACED

At the beginning of one mission, you are marked for dead by the organization you work for. Your handler has no idea what happened but informs you that they are coming for … END_OF_DOCUMENT_TOKEN_TO_BE_REPLACED

The history of gaming isn’t that old compared to other artistic and entertainment mediums. Many people have lived through the entirety of video game history, and more people have seen most of it. As such, you’d think that the … END_OF_DOCUMENT_TOKEN_TO_BE_REPLACED

(Updated 4/18/22) Even at a time when it feels like every game is being adapted into a show or movie, the news that Twisted Metal is being turned into a TV series stands out. Why? Well, it probably has … END_OF_DOCUMENT_TOKEN_TO_BE_REPLACED

(Updated 4/15/22) The reveal of the Mortal Kombat movie trailer and news that Street Fighter characters are joining the Fortnite roster has both legendary franchises on the minds of gamers everywhere. So, it’s only natural that fans have also … END_OF_DOCUMENT_TOKEN_TO_BE_REPLACED

Snowfall is here and it is time to cheer! Sorry about that… As different video games pump out their holiday events, plenty get swept under the radar. If you are tired from playing the multiple FPS holiday events … END_OF_DOCUMENT_TOKEN_TO_BE_REPLACED

Welcome ghouls, beasts, tricksters, and every horrific being known to man. The spooky season is upon us and I figured I would indulge in the festivities in my own way. Thus, I have come up with a satirical take on … END_OF_DOCUMENT_TOKEN_TO_BE_REPLACED