Hyper Light Drifter Is Hard To Play And Easy To Love

You know that Hyper Light Drifter is undeniably beautiful, but is it good?

That question is a little more tricky. Hyper Light Drifter wildly exceeded its Kickstarter goals due in part to those incredible visuals, and also because of the game’s liberal comparisons to titles like Dark Souls and The Legend of Zelda.

So far as the visuals go, it is very much worth mentioning again and again that this is one of the most artistically stunning games ever made. What’s truly fascinating about its visuals is the way that they impress you one way when you’re looking at them at face value, and another when you actually began to analyze what they represent in terms of the world and its mythology. Hyper Light Drifter is a complete artistic triumph. 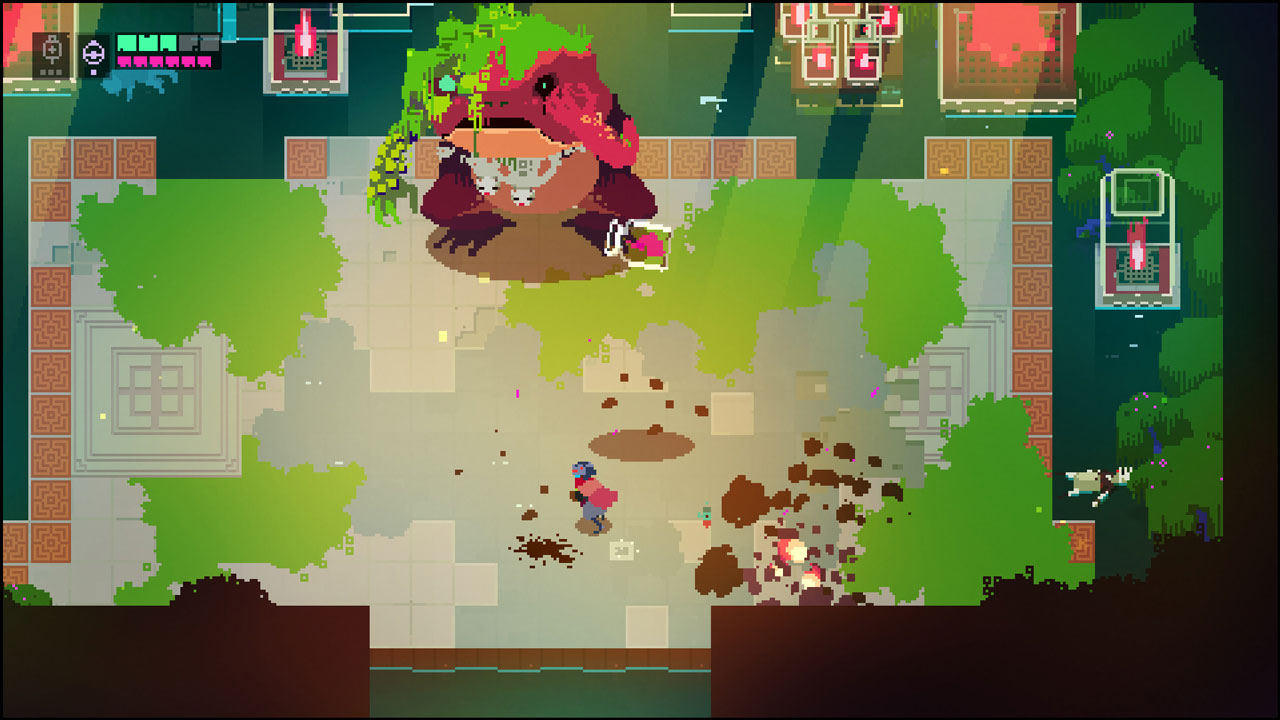 But what about that gameplay? Well, like in games like Dark Souls and Zelda, the primary objective here is to explore the in-game world, solve puzzles, engage in combat and generally use your wits to navigate yourself to the end of the game. It’s much more like Dark Souls in that regard, as Hyper Light Drifter is an incredibly tough and obscure game.

When you engage in your first battles, you should be prepared to die a lot. This is a skill-based combat system that requires you to really appreciate your every maneuver. That and your character’s weakness at the start means that a lot of Hyper Light Drifter players are going to be frustrated on the outset. The good news here is that the combat eventually proves to be brilliant once you are able to properly upgrade your character and learn the system.

Where Hyper Light Drifter’s Dark Souls envy falters a bit is in the navigation. To put it simply, finding out where to go next is often your greatest challenge in Hyper Light Drifter. The combat difficulties can be overcome through the natural course of play, but simply finding your way around is a consistent challenge. This wouldn’t be a bad thing, were it not for the fact that the game has a tough time leading you around organically. 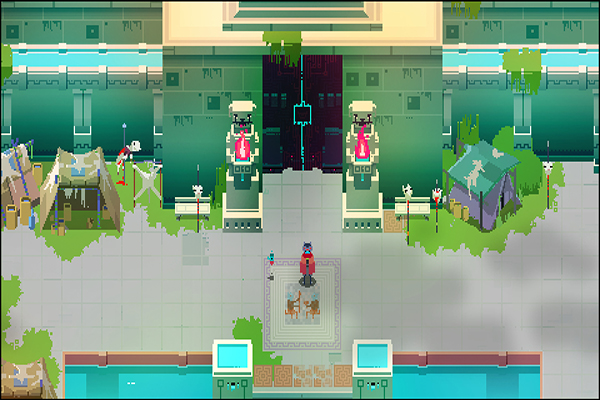 Whereas Dark Souls was a 3D game that could show you where to go through a visual landmark in the distance, Hyper Light Drifter relies more on turning navigation into an elaborate series of puzzles. Puzzles as roadblocks are one thing, but puzzles forming the road can make getting around more of a chore than it should be at times.

The story is also fairly obscure, but this tends to work in the game’s favor. Taking cues from the environment to find out just what is going on is an enjoyable part of the game given how beautiful it is. There are times when you’ll wish the narrative was a little more direct given how interesting it seems, but what story is there more than serves its purpose.

Hyper Light Drifter shares its growing pains with the player by making navigation more of an annoyance than it should be. However, this game is simply brilliant when it is presenting the right level of challenge, and thankfully that is the majority of the time. Anyone that loves a challenging adventure should fall in love with Hyper Light Drifter over time.

Wondering if you can run Halo Infinite on your laptop or desktop? Sure, why not? Halo Infinite has launched in open beta mode (Nov. 16, 2021) and will officially release on Dec. 8, 2021. The game is the sixth in … END_OF_DOCUMENT_TOKEN_TO_BE_REPLACED

I remember when I played my first Resident Evil. It was a gift and couldn’t wait to get it running in my old PS1. That old Capcom “this game contains scenes of explicit violence and gore” plastered on the … END_OF_DOCUMENT_TOKEN_TO_BE_REPLACED

At the beginning of one mission, you are marked for dead by the organization you work for. Your handler has no idea what happened but informs you that they are coming for … END_OF_DOCUMENT_TOKEN_TO_BE_REPLACED

If you were to bet me $20 that Amazon would be making an MMORPG at some point, I would still find some reason to not give it to you. Amazon games announced 3 new PC games to try to … END_OF_DOCUMENT_TOKEN_TO_BE_REPLACED

The Legend of Zelda: Breath of the Wild’s critical acclaim is often met with the counter of being “overrated” by some players. There are usually numerous reasons for this – both notable and ridiculous – but one of the … END_OF_DOCUMENT_TOKEN_TO_BE_REPLACED

I don’t play a lot of Apex Legends anymore. I enjoyed the game for a while, but there aren’t many games I’ve stayed with consistently over the long haul since the lost years of World of Warcraft. These days there … END_OF_DOCUMENT_TOKEN_TO_BE_REPLACED

Diehard fans of Call of Duty’s groundbreakingly successful battle royale – Warzone – have been eagerly anticipating the release of a new map for months now. … END_OF_DOCUMENT_TOKEN_TO_BE_REPLACED

The science-fiction horror game, originally released in 2008, was a massive success that influenced an entire generation of games within space/horror genre. Despite the … END_OF_DOCUMENT_TOKEN_TO_BE_REPLACED

After months of speculation regarding the release of an upgraded Switch system, Nintendo finally revealed its latest gaming system — the Nintendo Switch OLED Model. The new Switch will release on October 8, costs $349.99, and offers a long list … END_OF_DOCUMENT_TOKEN_TO_BE_REPLACED

The Legend of Zelda: Breath of the Wild’s critical acclaim is often met with the counter of being “overrated” by some players. There are usually numerous reasons for this – both notable and ridiculous – but one of the … END_OF_DOCUMENT_TOKEN_TO_BE_REPLACED