Better at being Starship Troopers than any of the actual Starship Troopers games, Infested Planet packs more alien mass murder in a single mission than most games have in their entire campaign. Infested Planet is about alien bug genocide. Sweet, sweet alien bug mass murder. Your small squad of space marines will gun down tens of thousands of aliens per level as the infinitely respawning horde tries to overrun your positions. Infested Planet manages to strike that perfect balance between being a power fantasy and a challenge that can sometimes seem impossible to overcome as the swarm mutates once again to counter your tactics.

The story of Infested Planet is simple: there are aliens. You are a member of Drake’s Devils, a mercenary company hired by the military to eradicate them all. Now get busy making lots of alien bug corpses. Okay, so there is a bit more to it than that. It turns out there is a hive mind directing the horde with a level of intelligence the military didn’t anticipate, and the aliens are constantly evolving to adapt to humanity’s weapons and tactics. As with many such sci-fi stories, there is animosity and infighting among the military commanders, Drake’s men, and the science team sent with the soldiers to study the planet and the aliens that inhabit it. There’s nothing too special about the story, which is delivered via text and character portraits between missions. 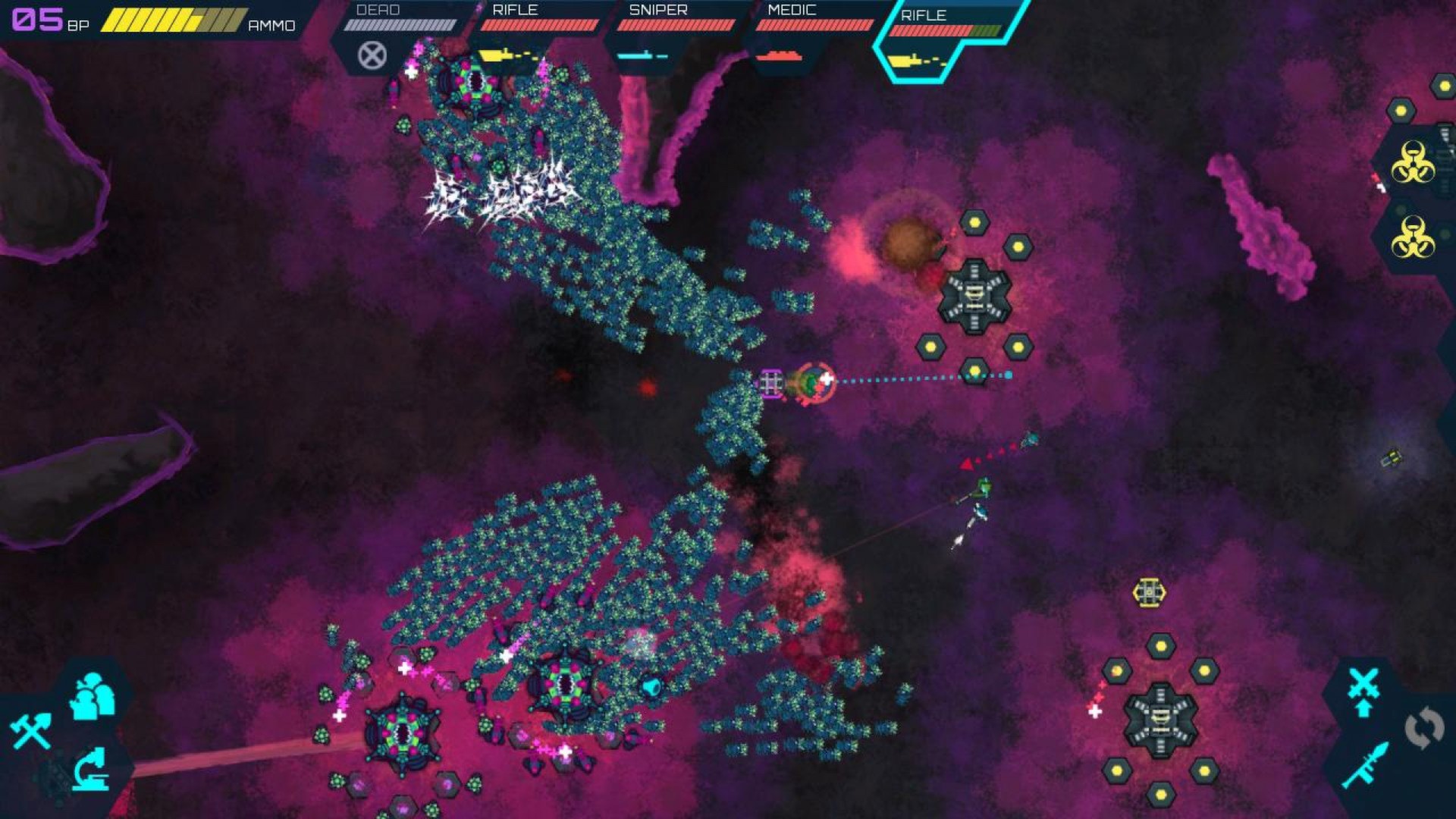 Of course, the real reason you are here is to slaughter thousands and thousands of aliens, a feat that Infested Planet excels at. You’ll generally start a mission with only five soldiers and a few resources to spend on upgrades and support structures. Alien hives dot the map and will spawn a constant stream of aliens until destroyed and captured. No matter the objective, most levels will consist of a constant tug-of-war as your small squad pushes back the aliens, captures points, and tries to hold them to push even deeper into alien territory. The aliens also evolve and mutate as your squad destroys hives. The mutations the aliens gain are often a direct counter to the sort of strategy and weapons you are employing at the moment, forcing you to constantly adapt in an arms race between your weaponry and the alien’s defensive mutations.

Luckily, your mercenaries have plenty of weapons and gadgets at their disposal. During missions, you can spend points you gain by destroying hives and completing objectives to bring in more soldiers, outfit existing soldiers with various special weapons, lay down defenses like turrets and minefields, or build support structures that unlock special abilities like helicopter strikes or med bays that improve the resilience of your troops. A secondary resources exists in battles in the form of Ammo, that allows your soldiers to use special active abilities like rocket launchers or airstrikes. Between missions you earn money that can be spent to research new weapons and structures, or hire temporary mercenaries to assist you in the next mission. You’ll gain money no matter the outcome of the mission, which will come in handy later in the campaign as the battles become more and more challenging.

The campaign itself has 17 missions and around a dozen increasingly challenging “random” missions that exist mostly to earn extra cash for research and to test your tactical prowess. Beyond that, the game’s replayability comes from a skirmish mode and the daily challenges and leaderboards, but there’s no direct multiplayer mode of any kind.

As I’ve emphasized throughout this review, Infested Planet‘s biggest strength is the overwhelming numbers your small squad is fighting against and the way aliens just come apart under fire. Flamethrowers, mini-guns, and grenade launchers can rip through dozens of aliens in a single shot, and even basic soldiers with their standard assault rifles mow down several aliens with each short burst of fire. The game does a fantastic job of rendering all these aliens as well; I have never experienced any sort of framerate drop or other performance issue no matter how many aliens are crawling around on screen. I believe this is mainly due to the rather simple graphics; a game with this many enemies and such a small dev team probably wouldn’t work otherwise.

Of course, the numbers can lead to the game’s big problem as well. Later missions can become a slog as your squad slowly tries to push back the tide of talons and fangs, and if the aliens evolve certain mutations early on in a mission, they can make the battle grind to a halt. I remember one of the campaign’s random missions saw the aliens adopt the Brute mutation early on when I didn’t have a particularly well-equipped squad. This caused the aliens to periodically spawn huge, heavily armored Brute aliens that are difficult to kill without special weapons. This made the battle become a near stand-still as my squad slowly pushed back the aliens inch by inch. But, eventually, you’ll gain a foothold and turn the tide in your favor. The randomly-generated nature of the skirmish maps can exacerbate the issue, sometimes spawning your starting position in a bad area that’s hard to defend or push forward from.

There are a few other small issues, like how it can be difficult to figure out where a soldier spawned. When soldiers are killed, they eventually respawn at a point you currently control, and as far as I can tell there is no way to set where they spawn. This sometimes leads to soldiers spawning in an out of the way control point and being forgotten about. This, combined with occasional hiccups in the soldier’s pathfinding, can lead to some minor annoyances and micromanagement that could be easily avoided if these mechanics worked just a little bit better. That said, there is a support structure you can build that brings soldiers directly to the frontlines in a helicopter, but there are so many other useful structures and weapons competing for your precious BP that you might not always find that structure worth it.

Infested Planet has a few flaws, and some later missions can become a grind as you slowly push your soldiers forward against a never-ending horde of aliens, but I never found the game tedious or irritating. As I said at the start, it gets the balance just right between power fantasy and near-daunting challenge as the seemingly unstoppable swarm slowly skitters its way towards your defensive positions. The campaign is very well paced, and doesn’t introduce new concepts or mechanics too fast that they become overwhelming, nor too slowly that you get bored. There is something extremely satisfying about watching your squad of mercenaries mow down a squirming mass of alien bodies and pushing forward against seemingly impossible odds. Infested Planet is a very unique experience worth checking into if you want a game that provides both a tactical challenge and the glee that comes from slaughtering some twenty thousand aliens per mission. It’s currently out on Steam for $15.

Wondering if you can run Halo Infinite on your laptop or desktop? Sure, why not? Halo Infinite has launched in open beta mode (Nov. 16, 2021) and will officially release on Dec. 8, 2021. The game is the sixth in … END_OF_DOCUMENT_TOKEN_TO_BE_REPLACED

I remember when I played my first Resident Evil. It was a gift and couldn’t wait to get it running in my old PS1. That old Capcom “this game contains scenes of explicit violence and gore” plastered on the … END_OF_DOCUMENT_TOKEN_TO_BE_REPLACED

At the beginning of one mission, you are marked for dead by the organization you work for. Your handler has no idea what happened but informs you that they are coming for … END_OF_DOCUMENT_TOKEN_TO_BE_REPLACED

If you were to bet me $20 that Amazon would be making an MMORPG at some point, I would still find some reason to not give it to you. Amazon games announced 3 new PC games to try to … END_OF_DOCUMENT_TOKEN_TO_BE_REPLACED

The Legend of Zelda: Breath of the Wild’s critical acclaim is often met with the counter of being “overrated” by some players. There are usually numerous reasons for this – both notable and ridiculous – but one of the … END_OF_DOCUMENT_TOKEN_TO_BE_REPLACED

I don’t play a lot of Apex Legends anymore. I enjoyed the game for a while, but there aren’t many games I’ve stayed with consistently over the long haul since the lost years of World of Warcraft. These days there … END_OF_DOCUMENT_TOKEN_TO_BE_REPLACED

Diehard fans of Call of Duty’s groundbreakingly successful battle royale – Warzone – have been eagerly anticipating the release of a new map for months now. … END_OF_DOCUMENT_TOKEN_TO_BE_REPLACED

The science-fiction horror game, originally released in 2008, was a massive success that influenced an entire generation of games within space/horror genre. Despite the … END_OF_DOCUMENT_TOKEN_TO_BE_REPLACED

After months of speculation regarding the release of an upgraded Switch system, Nintendo finally revealed its latest gaming system — the Nintendo Switch OLED Model. The new Switch will release on October 8, costs $349.99, and offers a long list … END_OF_DOCUMENT_TOKEN_TO_BE_REPLACED

The Legend of Zelda: Breath of the Wild’s critical acclaim is often met with the counter of being “overrated” by some players. There are usually numerous reasons for this – both notable and ridiculous – but one of the … END_OF_DOCUMENT_TOKEN_TO_BE_REPLACED