According to the press release, Max Gentlemen is what happens when an indie developer known for their quirky sense of humor is sent an Engrish-laden spam email about “male enhancement” pills that promise to make you a “max gentleman.” Developer The Men Who Wear Many Hats, best known for the Oregon Trail spoof Organ Trail, latched onto that one phrase and asked themselves what they believe constitutes a “max gentleman.” As it turns out, the answer is a bunch of shirtless, beefy British men who like booze and wearing giant stacks of fancy hats. Maybe someone should send The Men Who Wear Many Hats an email about a dethroned Nigerian prince so we can see what absurdity they come up with next.

The mechanics are extremely easy to pick up, but like any good arcade game it requires fast reflexes and a lot of practice to master. It is really aimed at those gamers who obsess over score attack and online leaderboards. I wish there was actual online multiplayer in addition to local multiplayer, but I can see Max Gentlemen being a great party game, especially once everyone has had a few of their adult beverages of choice. 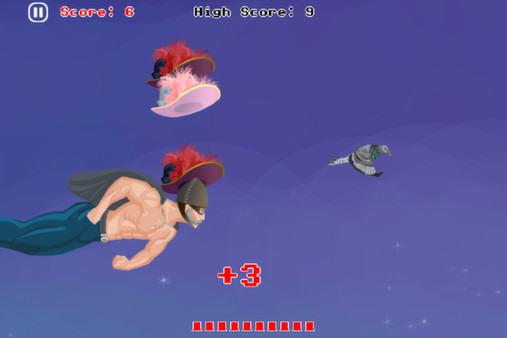 No matter what mode you choose, your main objective is to stack hats and avoid obstacles trying to knock your hats off. In Dodgy Levels your character is constantly moving to the right, much like in an endless runner. You have to jump to grab hats and avoid a barrage of objects coming from the right of the screen. Drinky Levels are significantly more frantic. In these levels you move your character left and right to grab drinks dispensed by a bartender, adding a new hat to your stack for each drink you consume. This time the obstacles are coming from both directions, which adds to the hectic nature of these levels.

The real challenge comes once you’ve built up a pretty tall stack of hats. Because the objects flying your way come at different elevations, you need to use the W and S keys to scroll between hats in your stack before you jump. Once a hat is highlighted, that hat and all the other hats above it in the stack will jump. Even with the addition of a quick scroll key, scrolling to a specific hat in your stack before an object hits can become quite challenging later on in a level. 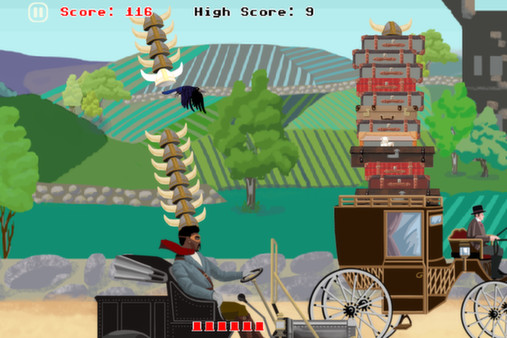 If you haven’t already figured it out, Max Gentlemen has a rather ridiculous sense of humor that tries to draw you in by how nonsensical everything looks. The presentation oozes stereotypical depictions of old-timey British gentlemen and only gets more absurd from there. Level backgrounds range from giant bar fights between ridiculously proportioned shirtless men fighting bears, to your character being shot out of a cannon and flying through the air. Hazards in Drinky Levels are heralded by speech bubbles containing archaic British insults and curses. 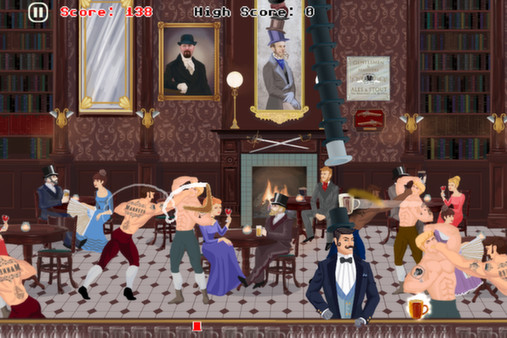 I’m not going to say that Max Gentlemen is some sort of masterpiece, some gaming messiah that you absolutely have to experience. You probably won’t devote hundreds, or even dozens, of hours of your time to it. But, it is a pretty solid little arcade title that can be played in short bursts, with enough challenge and replay ability to scratch your competitive score attack itch for at least a little while. It would actually be a great mobile game to burn some time during a lunch break, and is already available on Android with an iOS version coming as soon as it makes it through Apple’s approval process. Plus, the core game is free, so there really isn’t any reason not to give it a try. The two DLC packs will only set you back $6 for both, and add a pair of new levels, six new characters, and twelve new hats. If you do end up enjoying it, consider buying the DLC to support the developers. You can currently find Max Gentlemen on Steam.

Released in 2002 just two months before the debut of the beloved Grand Theft Auto: Vice City, it was, perhaps, inevitable that the two games would be compared. … END_OF_DOCUMENT_TOKEN_TO_BE_REPLACED

While the delay of Halo Infinite upset many franchise fans looking to dive into the series latest installment before 2021, the recent addition of Halo 3 ODST to Game Pass gives us a reason to dive a little deeper … END_OF_DOCUMENT_TOKEN_TO_BE_REPLACED

Four years ago, Doom had nothing to lose and everything to gain. The perception of the series after Doom 3’s mediocre release and the franchise’s subsequent hiatus left few people even looking for another game in the series. However, id … END_OF_DOCUMENT_TOKEN_TO_BE_REPLACED

Recently, I finished Rage 2.  I set out in the game with the hope that it would deliver something reminiscent of the magnificence of Doom while drawing some of the enjoyable open-world aspects of an Avalanche developed game.  I … END_OF_DOCUMENT_TOKEN_TO_BE_REPLACED

PlayStation Now sounded like a pretty exciting service when it was first revealed in 2014. At the very least, it offered … END_OF_DOCUMENT_TOKEN_TO_BE_REPLACED

With the announcement of Lucasfilm Games being created as well as Ubisoft taking on the role of creating an open-world Star Wars game, the future of the franchise seems bright. While EA has certainly turned things around with the … END_OF_DOCUMENT_TOKEN_TO_BE_REPLACED

Star Citizen has had an interesting year. Like many developers, the circumstances of 2020 left development hampered with most working remotely. However, Cloud Imperium Games had the advantage of having much of the infrastructure in place for this – … END_OF_DOCUMENT_TOKEN_TO_BE_REPLACED

There are times when a video game releases and the world stops… just for a second. Most of the time people wouldn’t even notice it in the heat of the moment. They wouldn’t feel the effects of that game’s … END_OF_DOCUMENT_TOKEN_TO_BE_REPLACED 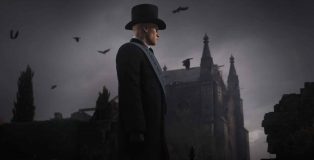 To spare you the … END_OF_DOCUMENT_TOKEN_TO_BE_REPLACED

While we’re just days away from an extended look at Resident Evil 8 and months away from the release of the game itself, we actually don’t know that much about the sequel. Most of what we do know (or … END_OF_DOCUMENT_TOKEN_TO_BE_REPLACED

With the announcement of Lucasfilm Games being created as well as Ubisoft taking on the role of creating an open-world Star Wars game, the future of the franchise seems bright. While EA has certainly turned things around with the … END_OF_DOCUMENT_TOKEN_TO_BE_REPLACED