Meltdown is a colorful arcade-style top-down shooter that tasks you with fighting through around 30 missions against an army of deranged robots in randomly generated levels. Or so the game says, I myself noticed very little variation in the actual level layouts. There is also a wave-based arena mode similar to the popular “horde” modes seen in many other games these days. All this can be done either by yourself or with up to 4 friends in online co-op, with split-screen co-op being an upcoming feature. The game supports cross-play between iOS, Android, and PC. My experience with the game was strictly solo because I never could find anyone to play with, a problem that always comes with rather obscure indie games with multiplayer modes. The game doesn’t use Steamworks multiplayer because of the cross-play nature of the title, so I can’t say if my problems finding people were due to unreliable servers, a lack of players, or a little of both. 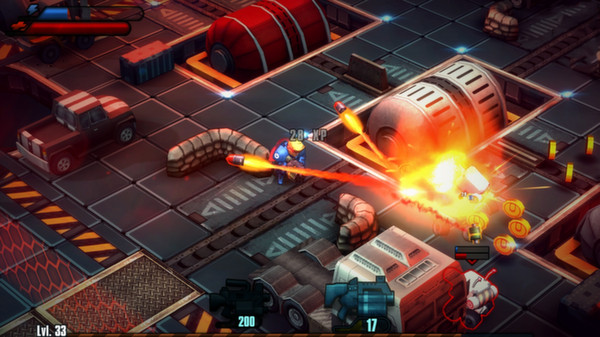 The game was originally made for iOS and Android, a fact that I didn’t realize at first, but made perfect sense the more I played. The first impressions I had from the game were rather positive. It’s a fun, fast-paced top-down shooter that wouldn’t seem out of place in an arcade back in the day. In the first few missions, level-ups came pretty frequently and I quickly gathered enough coins to buy some new weapons. But then, I hit a roadblock at around mission 4, where the difficulty suddenly spiked and new weapons and upgrades started to become increasingly more and more expensive. I imagine that this is where the mobile version would have started nagging you to buy coins and lives, but these micro-transactions don’t exist in the PC version. It’s just a shame that the progression curve doesn’t seem to be properly rebalanced to account for this lack of micro-transactions.

As you play you’ll gain experience used to level up and coins that can be spent on new weapons, armor, and upgrades. The game has three skill trees in the form of the Specialist, Soldier, and Medic. You can freely apply skill points however you want across these three skill “trees,” which are actually less a tree and more of a linear path. Specialist skills tend to deal with ammo consumption and weapon performance, Soldier is damage output and critical hits, and the Medic is mostly about health and shield capacity and regen rates.

The problem I have with the skills is that they are all just so dull and uninteresting. It isn’t until the final two skills in each line that you start seeing interesting passive effects, like a chance for an enemy to explode upon death and deal AOE damage to nearby enemies. Everything before those final skills are all things like +3% max health, or +3% max ammo. The weapon upgrades are just as uninspired. 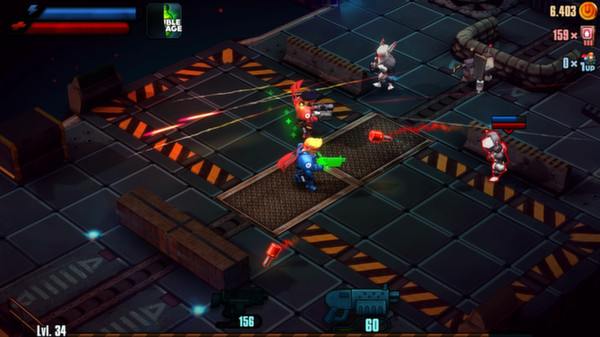 Of course, the biggest problem is that the rate at which you gain coins to buy all these upgrades and new weapons doesn’t seem like it was properly adjusted to make up for the PC version’s lack of micro-transactions. Annoying as it is, buying extra in-game currency for real money is a commonplace business model on mobile. In this regard, it makes sense to make the progression system as long and grindy as possible to “encourage” players to buy exp or coins to speed things up. While the PC version lacks the micro-transactions, the progression is just as grindy as it would be had the micro-transactions still been in place. The first few weapons and upgrades were relatively cheap, but quickly become very expensive. Weapon upgrades also require upgrade chips that are randomly dropped by enemies, another obvious remnant of the game’s micro-transaction-laden origins on mobile.

Other examples of its mobile origins exist as well, like how the game is deliberately designed to make you replay previous missions over and over again to get the coins and exp you need to stand a chance against the increasingly powerful enemies. Soloing this game gets near-impossible later on, as certain mob combinations can result in near-instant death. The game has a “lives” system, which is another archaic remnant of its mobile version. Levels have no checkpoints. If you die, you must spend a life to respawn where you died. If not, you have to restart the mission all over again. Lives are also fairly scarce. The only place I’ve seen them is in the mystery boxes that enemies occasionally drop. These often contain extra coins, exp, upgrade chips, or lives…except when they are empty. I had one mission where I got five mystery boxes and every single one of them contained nothing but a red frowny face informing me of my misfortune.

The menus and UI faired just as poorly in their transition to PC. The menus have that mobile look and feel that was obviously made for touch devices. Everything is represented by giant, glossy, colorful buttons that are easy to see and press on a tiny touchscreen. There is no real options menu to speak of, limited resolution options, and you can’t use a scroll wheel to navigate. If you try to use your scroll wheel the screen freaks out, almost like it is asking you to perform some sort of swipe motion on your monitor to scroll down. 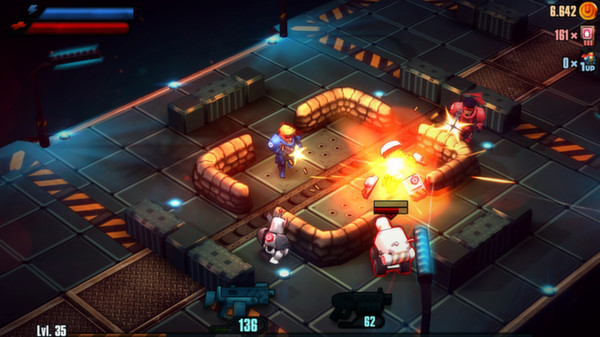 It’s all a shame, because as much as I’ve been hammering on this game it can actually be fun when it isn’t frustratingly difficult and grindy. The shooting is all pretty solid, and the colorful and exaggerated aesthetic is visually pleasing. There are some control issues, like how your character tends to stick to objects and how everything feels just a little sluggish; no doubt more issues related to the game’s transition from touch screens to keyboard and mouse. That said, it does have rebindable keys, so props to the developers for getting that right. None of the action is actually bad in and of itself. The problem is the progression system and difficulty spikes related to the game’s last vestiges of its mobile past. Also, soloing the game is a path that leads to many deaths and cursing.

I do want to like Meltdown, and at only $7 it is within the impulse buy range for most gamers. If only it was properly rebalanced to account for the lack of microtransactions and if the port worked better with keyboard and mouse then I could see it being a fun way to spend a weekend. On the positive side, the developers are actually quite active in the Steam forums, and have already made a few tweaks to the game at the request of PC players. Maybe, eventually, Meltdown might turn out to be a pretty solid PC title, but for now it isn’t quite there yet. There is some fun to be had here, and it might be an okay purchase during a Steam sale if you can convince a few friends to join you. Just know that this game was originally designed for mobile, and it shows.

Welcome ghouls, beasts, tricksters, and every horrific being known to man. The spooky season is upon us and I figured I would indulge in the festivities in my own way. Thus, I have come up with a satirical take on … END_OF_DOCUMENT_TOKEN_TO_BE_REPLACED

The month of October is here, and the spooky festivities are starting. However, it is still key to be aware of the other important events happening around this time of the year. For example, October is Breast Cancer Awareness month. … END_OF_DOCUMENT_TOKEN_TO_BE_REPLACED

Do so, and you’ll probably find that T END_OF_DOCUMENT_TOKEN_TO_BE_REPLACED

I remember when I played my first Resident Evil. It was a gift and couldn’t wait to get it running in my old PS1. That old Capcom “this game contains scenes of explicit violence and gore” plastered on the … END_OF_DOCUMENT_TOKEN_TO_BE_REPLACED

At the beginning of one mission, you are marked for dead by the organization you work for. Your handler has no idea what happened but informs you that they are coming for … END_OF_DOCUMENT_TOKEN_TO_BE_REPLACED

The history of gaming isn’t that old compared to other artistic and entertainment mediums. Many people have lived through the entirety of video game history, and more people have seen most of it. As such, you’d think that the … END_OF_DOCUMENT_TOKEN_TO_BE_REPLACED

(Updated 4/18/22) Even at a time when it feels like every game is being adapted into a show or movie, the news that Twisted Metal is being turned into a TV series stands out. Why? Well, it probably has … END_OF_DOCUMENT_TOKEN_TO_BE_REPLACED

(Updated 4/15/22) The reveal of the Mortal Kombat movie trailer and news that Street Fighter characters are joining the Fortnite roster has both legendary franchises on the minds of gamers everywhere. So, it’s only natural that fans have also … END_OF_DOCUMENT_TOKEN_TO_BE_REPLACED

Welcome ghouls, beasts, tricksters, and every horrific being known to man. The spooky season is upon us and I figured I would indulge in the festivities in my own way. Thus, I have come up with a satirical take on … END_OF_DOCUMENT_TOKEN_TO_BE_REPLACED

In 2020 it was revealed developer IO Interactive was working on a James Bond game known as Project 007 which, understandably, shook the video game world. Still in production, there’s a possibility that their James Bond game could be the … END_OF_DOCUMENT_TOKEN_TO_BE_REPLACED