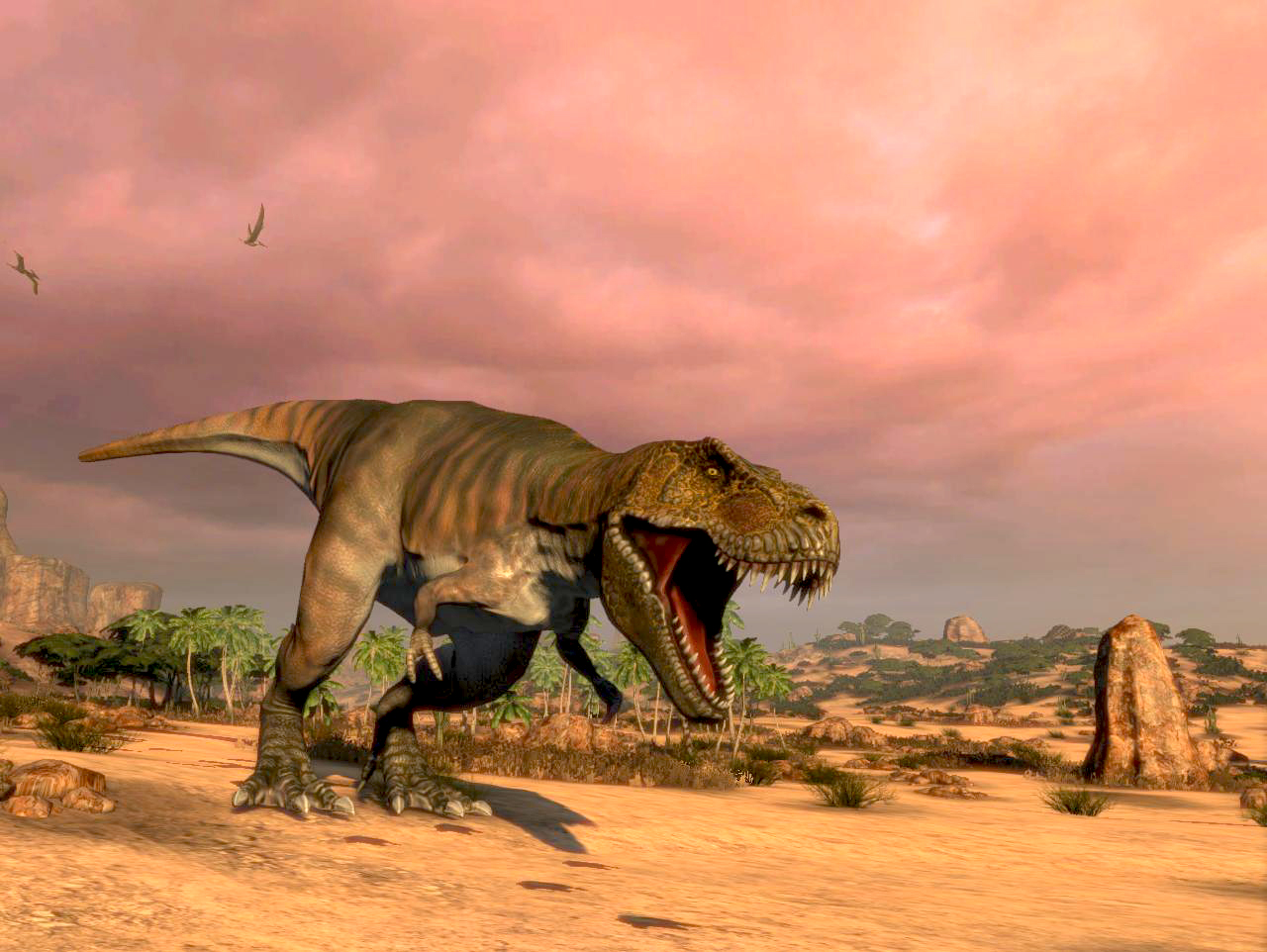 The Carnivores series by Action Forms is an old favorite from my childhood. I discovered the first game in a bargain bin at K-Mart when I was still gripped by my obsession with dinosaurs, an obsession that has admittedly never really gone away. After a decade with no games in the series, the franchise was brought back to life via upgraded mobile ports of Carnivores 2 and Carnivores: Ice Age, but that just isn’t the same as having a proper, modern follow-up…Mainly because playing an FPS with a touch screen is torture. Luckily, 2013 saw the release of Carnivores: Dinosaur Hunter HD on PS3, and now that reboot of the franchise has arrived on PC. While Carnivores: Dinosaur Hunter Reborn is an adequate reboot of this fairly obscure series, it suffers from some longevity issues due to a lack of content.

The basic concept of Dinosaur Hunter Reborn is just like the other games in the series. A primitive world full of prehistoric animals has been discovered in deep space, and a corporation has decided to exploit it by offering the ultimate big game hunting experience: the chance to hunt dinosaurs. Starting out with relatively harmless herbivores, you gradually work your way up the food chain until you have the chance to bag a T-Rex.

Each dinosaur is worth both gems and a trophy score, with the exact amount being determined by factors like kill distance, how many shots you took to bring it down, etc. This is where the game’s progression system comes in. Gems are used to purchase hunting licenses (which are required if you want to keep the dinosaurs you kill as trophies), weapons, gadgets, and upgrades, while your score is used to unlock new maps and new dinosaurs to hunt.

Your primary gadget is a handheld PDA-style device called M.I.S.T., which acts as a map, binoculars, an indicator that shows if you have been spotted or heard by your prey, and more depending on what sort of upgrades you decided to bring along. You can purchase upgrades for your M.I.S.T. device like a dinosaur call and a radar that shows nearby dinosaurs. Some other upgrades you can purchase include gadgets like cover scent, camouflage, extra ammo, and/or devices that highlight dinosaur tracks or x-ray sights that outline the location of a dinosaur’s heart and lungs when aiming. These gadgets all make your hunt much easier, as you can imagine, but deduct from your score.

The actual act of hunting the dinosaurs can be rather thrilling and tense, especially when you’ve worked your way up to carnivores. The gadgets do a nice job of allowing you to customize your difficulty, and there are lots of ways to track your quarry without using radars or dinosaur calls like footprints and blood trails. Each species has its own set of basic behaviors, like how they react to noise, how they have a tendency to congregate near watering holes, and so on, but their actual AI and pathfinding can be…questionable. It isn’t uncommon to see dinosaurs getting caught on terrain or running in circles, which is a real shame because these are issues that have been with the series since its inception nearly two decades ago.

I would have liked to see a modern Carnivores introduce more advanced behavioral patterns like herding, pack hunting, or just more interaction between the different species in general, but that sadly isn’t really here. Herbivores and carnivores can often been seen totally ignoring each other. The only time a carnivore shows any sort of predatory behavior is when its aware of your presence or when it stumble across a dinosaur you already killed. Yeah, the Carnivores games have always been budget titles, but a big part of what I wanted to see in a modern installment was more advanced behavior and AI.

While these issues could all be looked past, the more problematic flaw with this reboot is a lack of variety and content in general. Dinosaur Hunter Reborn may have a nice selection of gadgets and upgrades, but it comes up severely lacking in terms of weapons, maps, and most importantly, dinosaurs. In all these categories, Reborn has less content than the older titles like Carnivores 2 and Ice Age. Carnivores 2 had six weapons, five maps, and nine dinosaurs compared to Reborn‘s three guns, three maps (technically nine, though six of those are just different weather variants of the main three maps), and six dinosaurs. Of those six dinos, the only actual carnivores are Ceratosaurus and the T-Rex, which is particularly disappointing because the carnivores have always been the most fun to hunt because of how much more dangerous they are. Reborn also lacks the unique death animations of the original games. There was nothing that added insult to injury quite like seeing your lifeless body tossed around by a Rex before he devoured you.

All that said though, I can’t say that I didn’t enjoy my time with Carnivores: Dinosaur Hunter Reborn. I’ve put in around 10 hours so far, and even though my trophy room is stocked with two of each dinosaur, I still have the urge to play a little more of it. Maybe its nostalgia talking, but I find it rather satisfying tracking down dinosaurs and trying to bag larger, more impressive specimens of each species. Even with its warts, I’m glad that the Carnivores series was finally revived with a true new installment instead of rereleases or mobile ports of old games. There were brief mentions of DLC on the Steam forums, and I think that would do a lot to make this reboot more easily recommendable. It’s a fun game that just needs more content, though at least the price of entry isn’t particularly high. You can find Carnivores: Dinosaur Hunter Reborn on Steam and Humble Store for $15.

Also, note to the developers: I would buy Carnivores, Carnivores 2, and Carnivores: Ice Age if they were rereleased on GOG, especially if they had the extra content added in the mobile versions. Also, Primal Prey. I even enjoyed that one back in the day.

Frank is an aspiring game designer that currently writes for IndieGameSource, Gameverse, and Bell of Lost Souls. You can follow him on Twitter @Frank_Gaming for updates on future articles and reviews.

Snowfall is here and it is time to cheer! Sorry about that… As different video games pump out their holiday events, plenty get swept under the radar. If you are tired from playing the multiple FPS holiday events … END_OF_DOCUMENT_TOKEN_TO_BE_REPLACED

Amazon Prime members can get free games and free in-game content every month that last a certain amount of time. You can jump over to Amazon to sign-up for an account or navigate to the Prime Gaming section to see … END_OF_DOCUMENT_TOKEN_TO_BE_REPLACED

Do so, and you’ll probably find that T END_OF_DOCUMENT_TOKEN_TO_BE_REPLACED

I remember when I played my first Resident Evil. It was a gift and couldn’t wait to get it running in my old PS1. That old Capcom “this game contains scenes of explicit violence and gore” plastered on the … END_OF_DOCUMENT_TOKEN_TO_BE_REPLACED

At the beginning of one mission, you are marked for dead by the organization you work for. Your handler has no idea what happened but informs you that they are coming for … END_OF_DOCUMENT_TOKEN_TO_BE_REPLACED

The history of gaming isn’t that old compared to other artistic and entertainment mediums. Many people have lived through the entirety of video game history, and more people have seen most of it. As such, you’d think that the … END_OF_DOCUMENT_TOKEN_TO_BE_REPLACED

(Updated 4/18/22) Even at a time when it feels like every game is being adapted into a show or movie, the news that Twisted Metal is being turned into a TV series stands out. Why? Well, it probably has … END_OF_DOCUMENT_TOKEN_TO_BE_REPLACED

(Updated 4/15/22) The reveal of the Mortal Kombat movie trailer and news that Street Fighter characters are joining the Fortnite roster has both legendary franchises on the minds of gamers everywhere. So, it’s only natural that fans have also … END_OF_DOCUMENT_TOKEN_TO_BE_REPLACED

Snowfall is here and it is time to cheer! Sorry about that… As different video games pump out their holiday events, plenty get swept under the radar. If you are tired from playing the multiple FPS holiday events … END_OF_DOCUMENT_TOKEN_TO_BE_REPLACED

Welcome ghouls, beasts, tricksters, and every horrific being known to man. The spooky season is upon us and I figured I would indulge in the festivities in my own way. Thus, I have come up with a satirical take on … END_OF_DOCUMENT_TOKEN_TO_BE_REPLACED