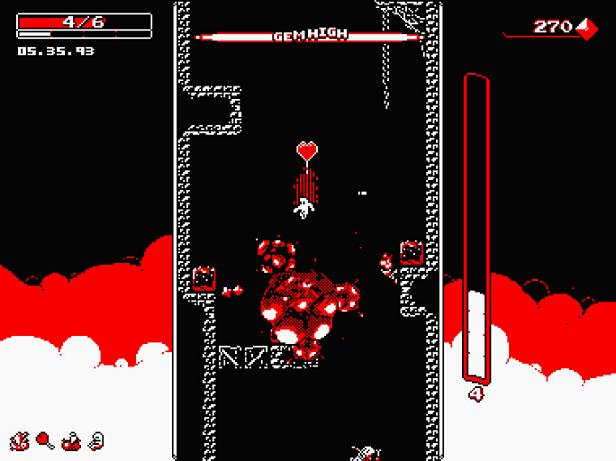 I had intended on doing this review a lot sooner, but that would involve writing about Downwell, and every time I think about this game I get the unstoppable urge to go play a few runs. You’ll often see me mention that so many of the “retro-inspired” games that flood Steam on a weekly basis don’t really “get it.” It seems like so many of them use “retro” as an excuse to cut corners and try to sell themselves purely on nostalgia without any of the polish or intuitive design of the classics many people fondly remember from decades past. Downwell is not one of those uninspired and cynical “retro” games, and does a fantastic job emulating classic platformers while still being something well-worth playing in 2015.

Like many platformers of old, Downwell is a fairly simple precision platformer that is easy to figure out and very hard to master. The game only uses three buttons, and plays surprisingly well with virtual controls on mobile devices and tablets, hardware that I would normally scoff at when it comes to any sort of twitch gaming. The premise is that you are a boy wearing gun boots traveling deeper and deeper into a well filled with monsters and valuable gems to collect. 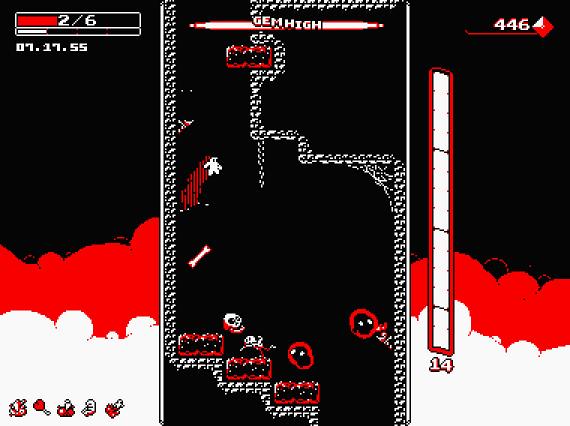 Instead of scrolling to the left or right like in a more traditional platformer, Downwell has you continuously falling downwards. Your gun boots primary usage is actually as a means of controlling your descent; every shot causes you to stop falling momentarily, allowing you to more easily change direction mid-air. Your most powerful means of killing enemies is by landing on them, which is usually a one-hit kill as opposed to the several shots most guns take. That said, you’ll quickly encounter a wide range of enemies with different behaviors and quirks, like red enemies that damage you when you land on them or turtles that are immune to bullets and must be stomped.

This is where the game’s focus on resource management comes into play, as your guns have limited ammo and the only way to recharge them is to land on something. You’ll need to carefully decide when to use your guns to shoot enemies and when to use them to control your descent, all while falling quite rapidly, or else you’ll find yourself out of ammo at a crucial moment and unable to stop your plummet deeper into the well. To make matters worse, any flying enemies you pass up will continue to follow you, and killing them once they are above you is much trickier.

As you kill enemies you’ll collect gems, which are both a currency and power-up. Once you’ve collected 100 gems you’ll enter a state known as Gem High, which increases the power of your guns and can be maintained for as long as you’re collecting gems. Occasionally you’ll find rooms that contain shops or new weapons. The shops usually sell health items or charge items that increase your ammo capacity. Guns you can find range from machine guns to shotguns or, my personal favorite, a laser that is capable of killing just about anything in your path but has very limited ammo, making it less effective as a means of propulsion. 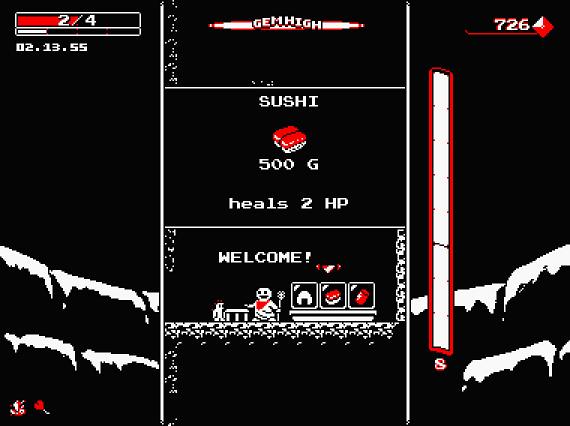 Between each level you’ll be given a choice of upgrades as well, some of which can drastically alter the way you play. These include making blocks explode into a shower of bullets when shot, a drone that follows you around and provides additional firepower, or even just an apple that instantly restores four health points. You’ll normally have a choice of three items between levels, though this can be affected by which “style” you pick.

Like most games with rogue-lite/like elements, Downwell features a progression system with various unlockables. The most notable of these unlocks are styles, which are kind of like character classes in other games and make some alterations to the way you play. Boulder Style gives you extra health at the expense of the number of upgrade choices you get between levels, while Handstand Style gives you a discount in shops but disables all upgrades. Other unlockables include palette swaps, of which there are many. Some even emulate specific hardware, like a green palette modeled after the original Gameboy screen and a Virtual Boy palette for those of you who want to permanently damage your eyesight.

The game is quite repetitive, and relies on you playing over and over again. Most of your runs will be over quickly, with each individual level lasting only a few minutes at most. However, the game is exceptionally well polished and priced just right for the experience. I really want to stress again how well the game nails the retro look and feel. The controls are tight, and the pixel art and chip tunes are really good. There is a lot of detail in the pixel art, like spent shell casings flying from your boots (there is even an upgrade that makes them deal damage). The screen shakes just enough with each shot to make your guns feel really powerful, but not so much that it becomes distracting. 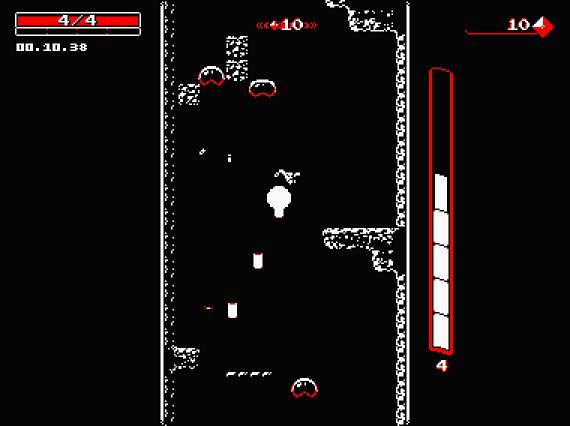 Bottom line is that Downwell is definitely one of the best retro-inspired platformers this year. Runs are fast, and the game has that addictive “just one more try” feeling of many good modern rogue-lites. My only real complaints are that there isn’t enough variety in the weapons and upgrades, and you’ll see all of them pretty quickly. Still, what the game does offer is really solid, and it’s great at what it does. Most importantly, the game is so cheap that you can easily look past the few flaws it does have. Downwell is out now on Steam, iOS, and Android for only $2.99, and it comes highly recommended.

Do so, and you’ll probably find that T END_OF_DOCUMENT_TOKEN_TO_BE_REPLACED

I remember when I played my first Resident Evil. It was a gift and couldn’t wait to get it running in my old PS1. That old Capcom “this game contains scenes of explicit violence and gore” plastered on the … END_OF_DOCUMENT_TOKEN_TO_BE_REPLACED

At the beginning of one mission, you are marked for dead by the organization you work for. Your handler has no idea what happened but informs you that they are coming for … END_OF_DOCUMENT_TOKEN_TO_BE_REPLACED

The history of gaming isn’t that old compared to other artistic and entertainment mediums. Many people have lived through the entirety of video game history, and more people have seen most of it. As such, you’d think that the … END_OF_DOCUMENT_TOKEN_TO_BE_REPLACED

(Updated 4/18/22) Even at a time when it feels like every game is being adapted into a show or movie, the news that Twisted Metal is being turned into a TV series stands out. Why? Well, it probably has … END_OF_DOCUMENT_TOKEN_TO_BE_REPLACED

(Updated 4/15/22) The reveal of the Mortal Kombat movie trailer and news that Street Fighter characters are joining the Fortnite roster has both legendary franchises on the minds of gamers everywhere. So, it’s only natural that fans have also … END_OF_DOCUMENT_TOKEN_TO_BE_REPLACED

In 2020 it was revealed developer IO Interactive was working on a James Bond game known as Project 007 which, understandably, shook the video game world. Still in production, there’s a possibility that their James Bond game could be the … END_OF_DOCUMENT_TOKEN_TO_BE_REPLACED

The history of gaming isn’t that old compared to other artistic and entertainment mediums. Many people have lived through the entirety of video game history, and more people have seen most of it. As such, you’d think that the … END_OF_DOCUMENT_TOKEN_TO_BE_REPLACED

30+ years on, there’s somehow nothing quite like an NES action game. From the soundtracks to the level design and airtight mechanics, classic NES games like Ninja Gaiden and Mega Man remain some of the absolute best the medium … END_OF_DOCUMENT_TOKEN_TO_BE_REPLACED