Super Comboman is the latest indie title to be picked up by Adult Swim Games. The cable network-turned-game publisher has become relatively well-known on the PC for helping out indie games that are not unlike their own TV shows: Quirky, surreal, and lighthearted in nature. Bonus points if the games are really difficult and/or have a retro-inspired aesthetic with old school mechanics. Volgarr the Viking and Super House of Dead Ninjas are two of their more well-known publishing efforts, but whereas those games are extremely challenging for being well-designed throwbacks to classic arcade and NES/SNES titles, Super Comboman is frustratingly difficult because of sloppy mechanics and poor design decisions.

Super Comboman is a 2D brawler with some platforming and puzzle elements that has you take on the role of Struggles, a comic nerd that is obsessed about a superhero named Super Comboman. Using a repertoire of fancy moves inspired by his favorite hero, Struggles takes up a job spanning some 16 levels. Progression resembles a traditional brawler, where you start out with a small set of moves and buy more over the course of the game. However, the combat plays a bit more like a fighting game, with an emphasis on building up huge combos and special moves that require a combination of directional inputs combined with one of several attack buttons. 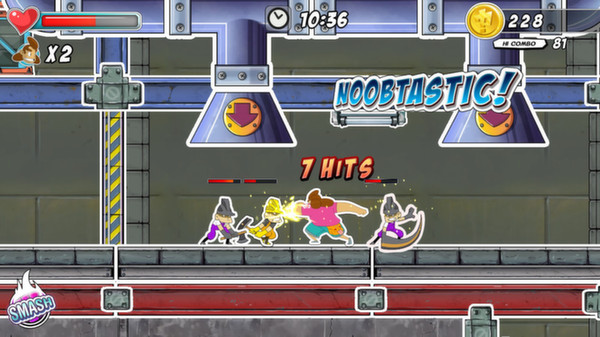 The problem that becomes immediately obvious is that this game has some cripplingly bad input lag. While your death can be blamed on your own ineptitude in other, more polished brawlers, here you’ll often feel like your failures are directly due to the unresponsive controls. Many, many times I’ve hit the block or parry buttons only to have nothing happen. The input lag makes some of the more complicated moves harder to pull off than they really should be as well. Your character also has a bad tendency to “stick” to things, making it hard to disengage from enemies. This, combined with the input lag and tendency of enemies to stun lock you, means that getting stuck between two enemies is usually a death sentence. While the AI is pretty good at stun locking you to death, they are really bad at basic level navigation. They will rarely chase after you if you leave them behind, and they can’t do any sort of platforming, often leaving them stuck behind barrels and other objects.

Besides buying new moves, you can also buy and equip perks. You can have two of these passives equipped at a time, and they only activate once you get to a certain combo number and stay active as long as you maintain your combo. There is nothing wrong with this idea in itself, but the perk system falls apart when you take the game’s level design into account. By the time you build up a big enough combo to have both perks active, you are usually out of enemies or objects to punch to keep your combo going. Since the levels also tend to have stretches of platforming or puzzles with no enemies, this creates a situation where you will rarely have your perks active for more than a second or two, making the whole system a waste of your time and money.

In addition to your standard attacks and special moves, there is a smash attack that can be performed when the Smash meter in the bottom left corner of the screen recharges. The smash is a powerful attack that usually sends enemies or objects flying across the screen, and many of the game’s physics and environmental puzzles are based around this attack. The problem here is that there isn’t much consistency when it comes to how your smash attack interacts with the environment and enemies. Sometimes you’ll send an enemy flying across the screen, slamming him into other enemies and knocking them all down like bowling pins. Other times the enemy won’t move at all after being smashed, or they’ll only fly a few feet and do nothing to the enemies they came into contact with. 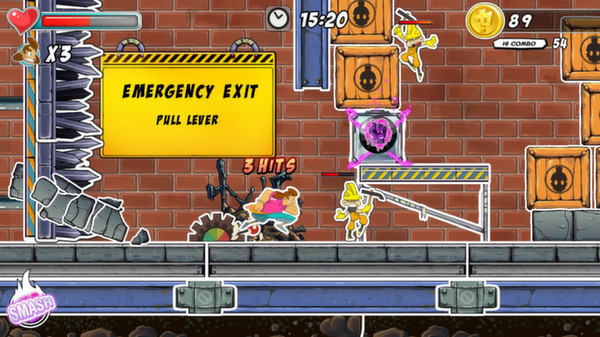 This lack of consistency gets especially frustrating when you must smash enemies into buttons or other objects in the environment to continue. There are several puzzles where you must smash an enemy into a strategically-placed mattress, which in theory will send them bouncing upward into a button you can’t reach. In practice, you’ll often need to retry these puzzles multiple times because the enemy didn’t react correctly to being smashed into the mattress.

Joining in on the lack of consistency is the game’s approach to checkpoints. The game uses a three lives system, and you’ll occasionally gain new lives during a level. As long as you have lives left, you’ll respawn at the last checkpoint. Once you run out, you’ll need to start the level over again. Fair enough, many games in this genre take such an approach to lives and checkpoints. In Super Comboman though, checkpoints are either too close together or way too far apart. Some levels give you so many checkpoints that there isn’t much consequence to dying once or twice, while others place the checkpoints so far apart that you can easily lose several minutes of progress if you die.

The presentation is the best thing I can say about Super Comboman. The whole game looks like an animated comic book, and it usually looks great in motion outside of the occasional bit of jaggy edges. The music and sound effects are all pretty solid as well, if a bit repetitive at times. Sadly, the options menu is another place where the game falls flat. There are no resolution or sound options to speak of. The sound and music options are literally just “on” or “off,” and there is no way to turn the announcer or enemy chatter off if you find yourself getting annoyed with their tiny pool of repetitive phrases. 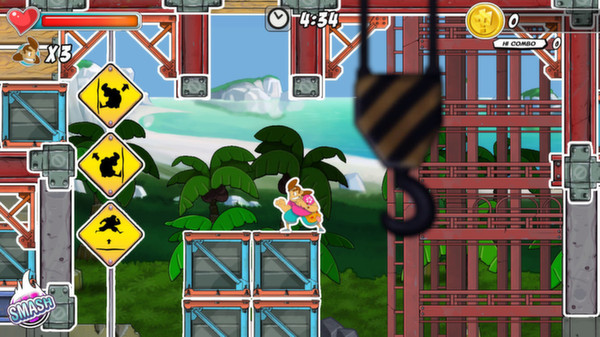 Super Comboman is full of missed potential. Sometimes, you can squeeze some fun out of it when you manage to get a big combo going or the smash attack works as intended and sends a helpless mook flying across the screen to crash into a stack of crates or several of his buddies. There is a fun game buried in here somewhere, but those little moments of brilliance are just not worth slogging through its long list of faults. The 2D brawler puzzle-platformer genre isn’t really lacking titles at the moment, and it is just impossible to recommend Super Comboman when games like Guacamelee!, Double Dragon: Neon, Foul Play, and Aces Wild: Manic Brawling Action! exist.

Wondering if you can run Halo Infinite on your laptop or desktop? Sure, why not? Halo Infinite has launched in open beta mode (Nov. 16, 2021) and will officially release on Dec. 8, 2021. The game is the sixth in … END_OF_DOCUMENT_TOKEN_TO_BE_REPLACED

I remember when I played my first Resident Evil. It was a gift and couldn’t wait to get it running in my old PS1. That old Capcom “this game contains scenes of explicit violence and gore” plastered on the … END_OF_DOCUMENT_TOKEN_TO_BE_REPLACED

At the beginning of one mission, you are marked for dead by the organization you work for. Your handler has no idea what happened but informs you that they are coming for … END_OF_DOCUMENT_TOKEN_TO_BE_REPLACED

If you were to bet me $20 that Amazon would be making an MMORPG at some point, I would still find some reason to not give it to you. Amazon games announced 3 new PC games to try to … END_OF_DOCUMENT_TOKEN_TO_BE_REPLACED

The Legend of Zelda: Breath of the Wild’s critical acclaim is often met with the counter of being “overrated” by some players. There are usually numerous reasons for this – both notable and ridiculous – but one of the … END_OF_DOCUMENT_TOKEN_TO_BE_REPLACED

I don’t play a lot of Apex Legends anymore. I enjoyed the game for a while, but there aren’t many games I’ve stayed with consistently over the long haul since the lost years of World of Warcraft. These days there … END_OF_DOCUMENT_TOKEN_TO_BE_REPLACED

Diehard fans of Call of Duty’s groundbreakingly successful battle royale – Warzone – have been eagerly anticipating the release of a new map for months now. … END_OF_DOCUMENT_TOKEN_TO_BE_REPLACED

The science-fiction horror game, originally released in 2008, was a massive success that influenced an entire generation of games within space/horror genre. Despite the … END_OF_DOCUMENT_TOKEN_TO_BE_REPLACED

After months of speculation regarding the release of an upgraded Switch system, Nintendo finally revealed its latest gaming system — the Nintendo Switch OLED Model. The new Switch will release on October 8, costs $349.99, and offers a long list … END_OF_DOCUMENT_TOKEN_TO_BE_REPLACED

The Legend of Zelda: Breath of the Wild’s critical acclaim is often met with the counter of being “overrated” by some players. There are usually numerous reasons for this – both notable and ridiculous – but one of the … END_OF_DOCUMENT_TOKEN_TO_BE_REPLACED