Review: Take a Road Trip in ‘Wheels Of Aurelia’ 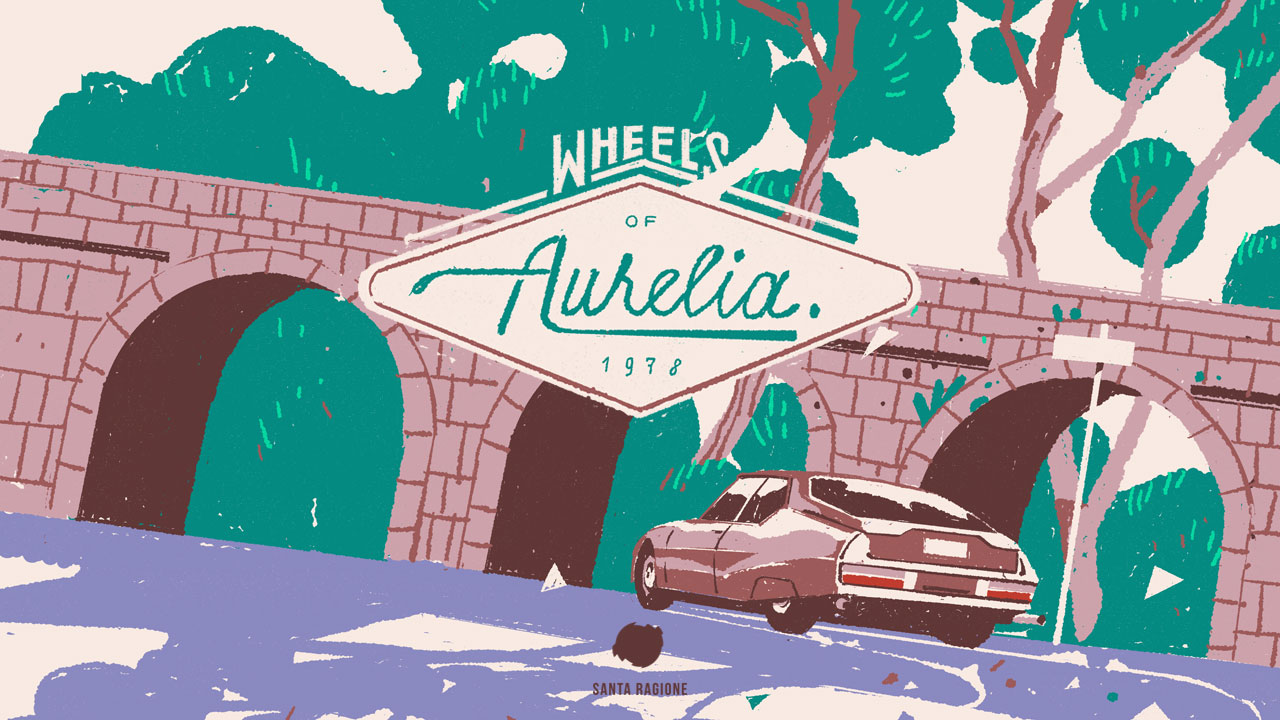 Wheels Of Aurelia is a top-down 2D driving adventure game where you play as Lella, a badass Italian chick who’s tearing cross country on a roadtrip to the French Riviera in the year 1978. Developed by a small two man Italian studio called Santa Ragione, the game lets you cruise along the picturesque locales of Italy and beyond as you have conversations with various passengers picked up along the way.

The average playthrough of Wheels Of Aurelia in its current beta state takes about 10-15 minutes to complete, depending on how fast you drive, how many passengers you stop and pick up, and which routes you take. The gameplay is divergent, allowing for ten different outcomes depending on your actions. It’s interesting that the game plays like an old arcade driving game, because the gameplay and narrative couldn’t be more indicative of modern gaming.

The plot, whatever direction it unfolds in, plays out much like a French New Wave flick. Lella is a short haired, leather jacketed, stripe shirt wearing young rebel who’s totally willing to shell out her wit at anyone who’s sitting in the passenger seat. I found her character to be absolutely charming, and I loved getting to decide between all the different things she can say. You can have pointed conversation, or you can just take in the sights and have quiet road conversations. 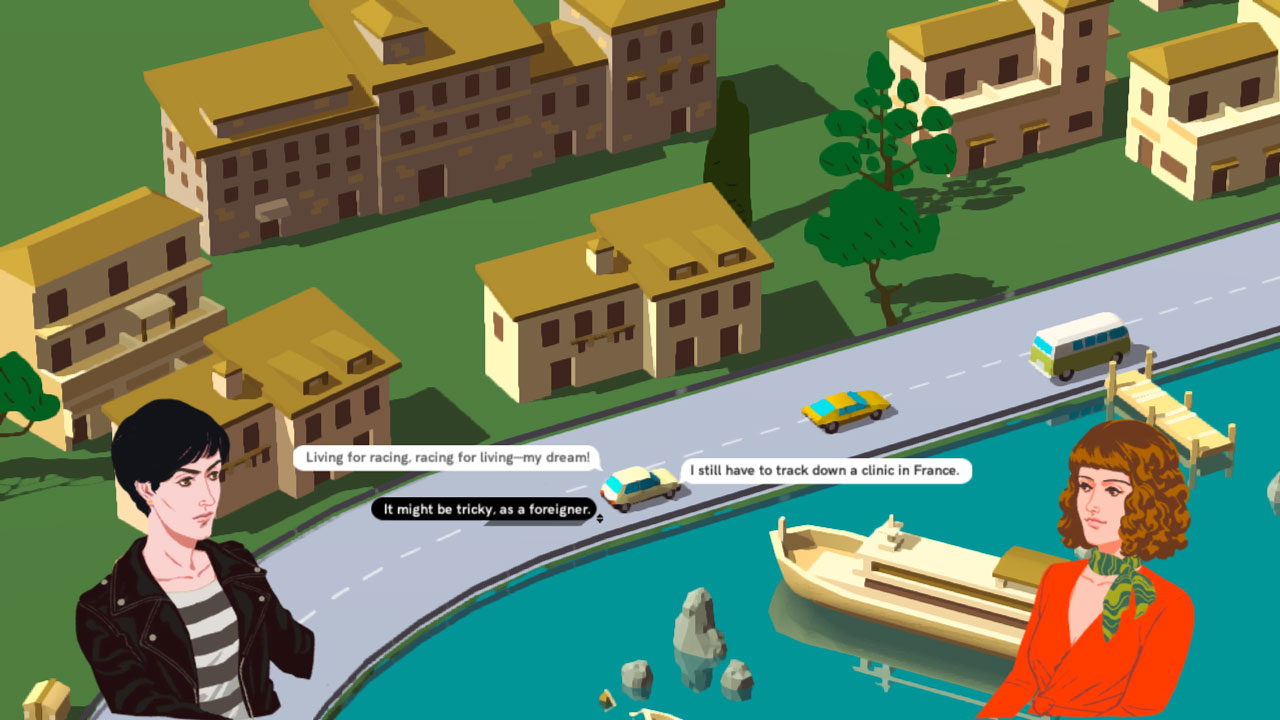 What’s most amazing about the experiment that Wheels Of Aurelia plays with is how effective its simplistic gameplay is at sucking you into the story. While the driving mechanics seem primitive and almost pointless most of the time, they add a layer of distraction for your conscious mind, allowing the subtle emotionality of each of the game’s branching narratives to dive deeper than they might otherwise if this was simply a visual novel or more standard adventure game.

The driving, as relatively relaxed as it is, really serves to help tell the story. While the game has no voice acting and the stunning character portraits aren’t overly animated, you can easily imagine every scene in the game because of the sort of trance the driving puts you in.

The stylish score fills in the silence of the road nicely, and while the graphics are low key, the 70s style vistas look romantic enough to draw your eye. I’ve rarely experienced something in a video game as interesting as cruising past an Italian beach while my character charmingly tells her accomplice about a local landmark. 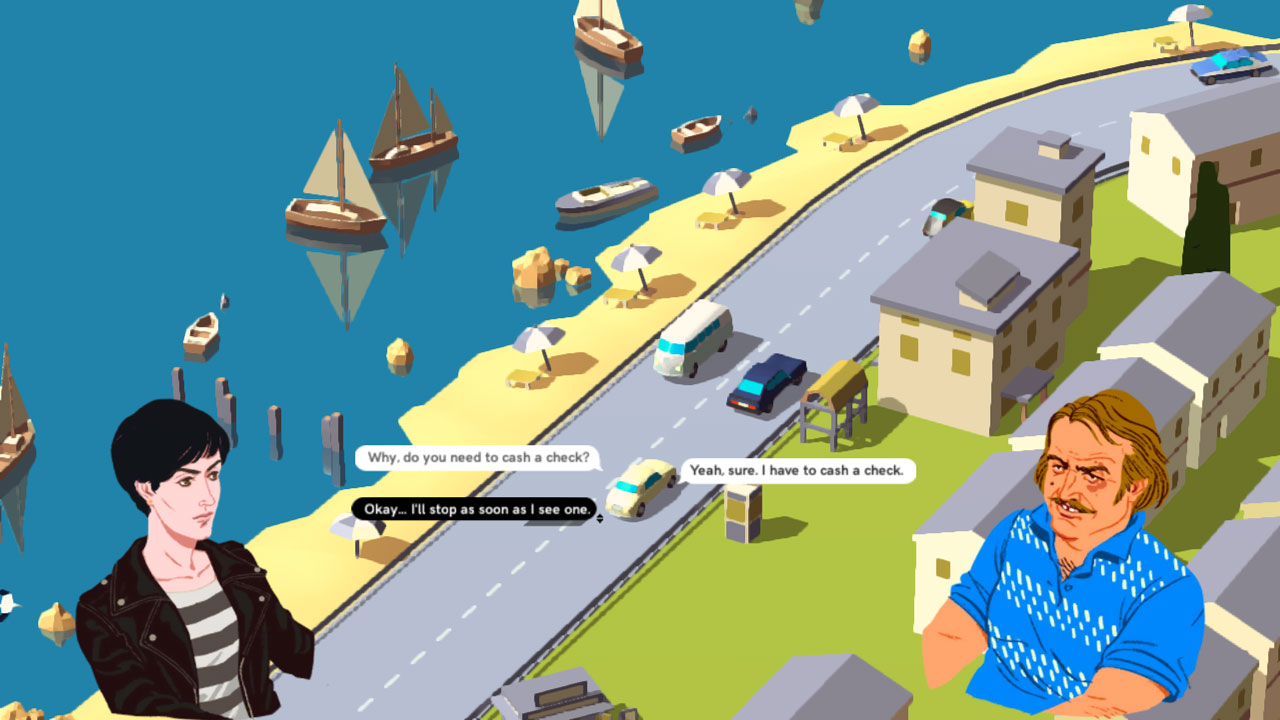 Elements of world history, feminism, and political issues weave their way into the casual conversations. And, it’s amusing how Lella’s interactions with each character are different in ways that totally fit. The game’s writing is subtle enough to pass for the screenplay of an art house film; I’d love to see Lella in another game.

There are a few flaws in this beta version. It’s a little difficult to tell where you’re going, and the system for picking up new passengers is left for you to discover rather than given in any kind of tutorial. I found it a little difficult to navigate conversations with more than one person in the car, with characters I didn’t want to talk to sometimes interrupting on characters I did want to converse with. Also, it’d be great to be able to deny someone a ride once you pull in, as I accidentally pulled up to more than one passenger in my quest to get the game’s 10 distinct endings.

All in all though, as a proof of concept, this beta version rocked my world. I couldn’t believe how simply and easily the game tells such a distinct and new kind of story, one I’d never imagined being told through a video game. The game’s soulful romantics leave me yearning for more and more of its characters and world, and it makes me pine for a big, 3D version where I can get out of the car and walk around, while also making me love this old, archaic 2D arcade car setup.

This is a game that shouldn’t be missed. It’s currently available on Humble Bundle for the next few days, and I suggest you vote for it on Steam Greenlight, as a worthy entry into any indie game aficionado’s library. It’s also a great entry point for friends you might have who don’t play video games, as a simple kick back and enjoy title.

Do so, and you’ll probably find that T END_OF_DOCUMENT_TOKEN_TO_BE_REPLACED

I remember when I played my first Resident Evil. It was a gift and couldn’t wait to get it running in my old PS1. That old Capcom “this game contains scenes of explicit violence and gore” plastered on the … END_OF_DOCUMENT_TOKEN_TO_BE_REPLACED

At the beginning of one mission, you are marked for dead by the organization you work for. Your handler has no idea what happened but informs you that they are coming for … END_OF_DOCUMENT_TOKEN_TO_BE_REPLACED

The history of gaming isn’t that old compared to other artistic and entertainment mediums. Many people have lived through the entirety of video game history, and more people have seen most of it. As such, you’d think that the … END_OF_DOCUMENT_TOKEN_TO_BE_REPLACED

(Updated 4/18/22) Even at a time when it feels like every game is being adapted into a show or movie, the news that Twisted Metal is being turned into a TV series stands out. Why? Well, it probably has … END_OF_DOCUMENT_TOKEN_TO_BE_REPLACED

(Updated 4/15/22) The reveal of the Mortal Kombat movie trailer and news that Street Fighter characters are joining the Fortnite roster has both legendary franchises on the minds of gamers everywhere. So, it’s only natural that fans have also … END_OF_DOCUMENT_TOKEN_TO_BE_REPLACED

In 2020 it was revealed developer IO Interactive was working on a James Bond game known as Project 007 which, understandably, shook the video game world. Still in production, there’s a possibility that their James Bond game could be the … END_OF_DOCUMENT_TOKEN_TO_BE_REPLACED

The history of gaming isn’t that old compared to other artistic and entertainment mediums. Many people have lived through the entirety of video game history, and more people have seen most of it. As such, you’d think that the … END_OF_DOCUMENT_TOKEN_TO_BE_REPLACED

30+ years on, there’s somehow nothing quite like an NES action game. From the soundtracks to the level design and airtight mechanics, classic NES games like Ninja Gaiden and Mega Man remain some of the absolute best the medium … END_OF_DOCUMENT_TOKEN_TO_BE_REPLACED