Review: What is Hiding For You Behind The Last Door?

The Last Door is a game developed by The Game Kitchen and published by Phoenix Online Studios. It was released episodically beginning in 2013 from a Kickstarter project with four episodes to the first season. The game is continuing on into its second season now which will be available in 2015 to the public, or it can be played now by donating to the Kickstarter at this page here, The Last Door. The basic version is free on their site, but I recommend the collector version on Steam.

To start off this review, I want to simply state that this game series is one of the best I have played yet in my time doing reviews. It is a retro pixel masterpiece in multiple ways. The game’s story is one of intrigue and depth, following the adventures of Jeremiah Devitt. He must investigate the mystery behind his friend’s curious letter inviting him to his home – a friend he had not seen since their school days. What unfolds will take players through thrilling and mysterious scenarios, as well as controversial game content, as they solve the game’s mysteries and puzzles.

The Last Door shines in multiple areas with the simplistic art style as the first. One of the first elements I noticed was that, although the art appears simple at first glance, it is a throwback to an older style seen in 80s adventure games. This game uses this simple pixel style to keep the focus on the story and other areas without too much distraction from graphics. It also fits the more rudimentary and rough style that meshes with the game’s time period. The retro style art is valuable for me since I am used to it and grew up on it. However, for those used to today’s advances in graphics and next-gen art, it could be something less appealing to view for an entire game as it may come off overly simple.

The second strong point is sound design, which involves a truly superb musical score and high quality sound effects. The musical score jumps out immediately in the introduction movie, that I absolutely love listening too after a new episode starts. I immediately jumped on how phenomenal the sound effects were as my player walked across a wooden floor. It seemed as if I was actually walking across real wood. The great sound effects do not end as the jump scares and other horror elements are emphasized through their use. 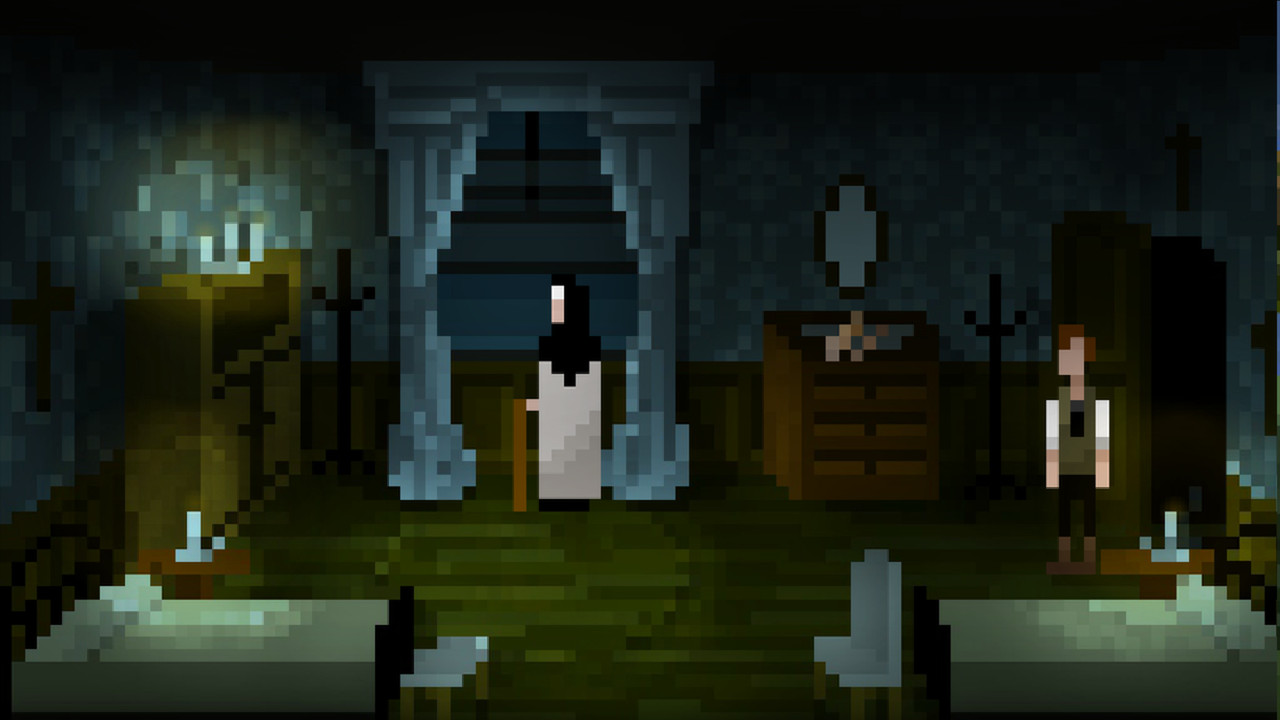 The last strong point of note comes in the story design. I have always believed in entertainment that grabs me right from the intro, and this game delivers with an amazingly confusing and dramatic introductory sequence to the story that draws in the player and sinks the hook. As the story progresses, it only grows in depth and complexity as the player is taken on a journey through the protagonist’s past and present by the use of flashback scenes and gameplay that involves playing other characters at points.

There are so many positives to be found in this title. I have to say that I may be biased, though, as this pixel art style is what I played growing up. Negatives found in The Last Door? There is only one I see. The pace of the game. As players walk around the levels using point-and-click mechanics, a game of this genre can be a bit slow at times. These old mechanics of play that lack the fast-paced nature of many of today’s titles may be a turnoff.

I cannot wait to play the new episodes, and I recommend supporting the Kickstarter as it will allow gamers to play each new episode as it is released. I am going to buy it when the next season is released. After all, I love to binge play and not having the whole season at once would drive me crazy. Check out this title for a lovely and artistic gaming adventure.

Snowfall is here and it is time to cheer! Sorry about that… As different video games pump out their holiday events, plenty get swept under the radar. If you are tired from playing the multiple FPS holiday events … END_OF_DOCUMENT_TOKEN_TO_BE_REPLACED

Amazon Prime members can get free games and free in-game content every month that last a certain amount of time. You can jump over to Amazon to sign-up for an account or navigate to the Prime Gaming section to see … END_OF_DOCUMENT_TOKEN_TO_BE_REPLACED

Do so, and you’ll probably find that T END_OF_DOCUMENT_TOKEN_TO_BE_REPLACED

I remember when I played my first Resident Evil. It was a gift and couldn’t wait to get it running in my old PS1. That old Capcom “this game contains scenes of explicit violence and gore” plastered on the … END_OF_DOCUMENT_TOKEN_TO_BE_REPLACED

At the beginning of one mission, you are marked for dead by the organization you work for. Your handler has no idea what happened but informs you that they are coming for … END_OF_DOCUMENT_TOKEN_TO_BE_REPLACED

The history of gaming isn’t that old compared to other artistic and entertainment mediums. Many people have lived through the entirety of video game history, and more people have seen most of it. As such, you’d think that the … END_OF_DOCUMENT_TOKEN_TO_BE_REPLACED

(Updated 4/18/22) Even at a time when it feels like every game is being adapted into a show or movie, the news that Twisted Metal is being turned into a TV series stands out. Why? Well, it probably has … END_OF_DOCUMENT_TOKEN_TO_BE_REPLACED

(Updated 4/15/22) The reveal of the Mortal Kombat movie trailer and news that Street Fighter characters are joining the Fortnite roster has both legendary franchises on the minds of gamers everywhere. So, it’s only natural that fans have also … END_OF_DOCUMENT_TOKEN_TO_BE_REPLACED

Snowfall is here and it is time to cheer! Sorry about that… As different video games pump out their holiday events, plenty get swept under the radar. If you are tired from playing the multiple FPS holiday events … END_OF_DOCUMENT_TOKEN_TO_BE_REPLACED

Welcome ghouls, beasts, tricksters, and every horrific being known to man. The spooky season is upon us and I figured I would indulge in the festivities in my own way. Thus, I have come up with a satirical take on … END_OF_DOCUMENT_TOKEN_TO_BE_REPLACED