Ride Your Way to Riches and Glory on Chariot

Chariot is a game made by a Canadian Indie developer, Frima Studio. It was released at the end of September 2014 and made available free to gold subscribers on Microsoft Xbox One. It was later released on all other next generation platforms. Frima Studio was founded in 2003 in Quebec City, Canada.

The first noticeable element in the beginning of Chariot is the amazing graphic presentation. Colorful as can be, with a wonderful artistic style, the game takes a cartoonish and light-hearted tone. The musical soundtrack and sound effects are also playful. I found instant attraction to humming the main tune over and over. The game takes a more serious story plot and turns it into a fun cave-crawling adventure through humorous dialogue, characters, and scenes. Growing up playing the platformers genre, I felt like I would have no problems with this game.

Players start out with an opening sequence involving a brother and sister attending the burial site of their deceased father, the King. In doing so, they find his spirit upset that he has not been laid to rest in a more glorious location that would be more suited to the power he had in physical form. Not pleased with his children for inflicting this upon him, he then issues a command for them to seek out the most treasure and riches possible to make his burial chariot amazing. They must also seek out upgrades to make his chariot even better. Ah, what kids must do to make their parents happy. This is an especially daunting task with a father who was a cocky King and is now a spirit who barks commands at them as they proceed. 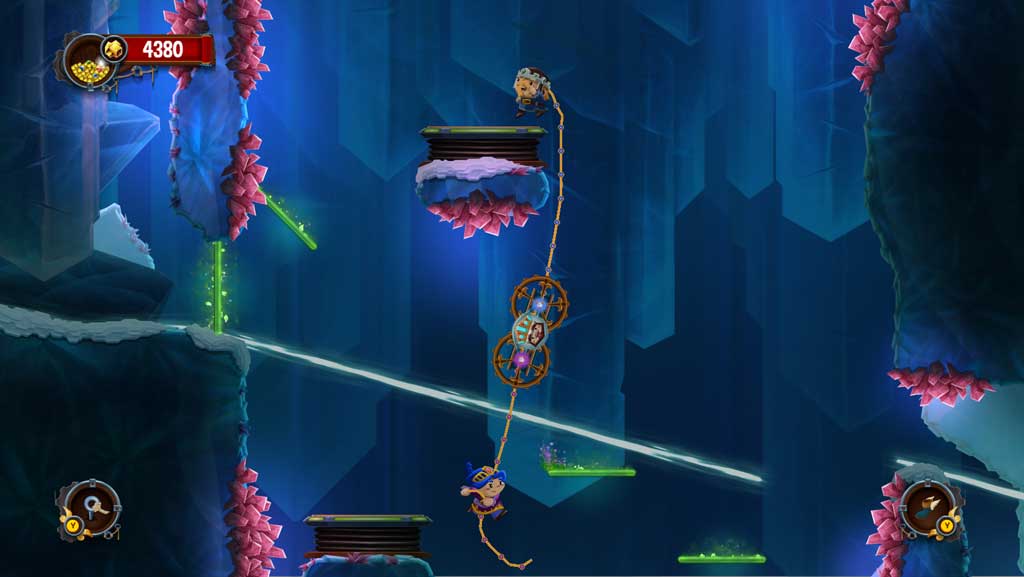 Finding these treasures is interestingly done because the chariot is used as a magnet to draw them in to itself as you move pushing or pulling the chariot. I found the use of the chariot immensely helpful when my nature as a hoarder and collector would push me to risk life and limb for a gem. The chariot cannot only be used to draw in treasure, but can also be pulled and pushed into locations for use as a platform for reaching higher areas and for a speedy trip down a steep ledge. With increasing tools and upgrades available as players advance, the chariot can be used in conjunction with these to overcome obstacles. One of these is the rope hook. I found it useful for planting down a hook on the chariot to ground myself while I plunged into chasms in search for the next ledge. This chariot can also drive you crazy if you do not use it right. One use of the chariot involves pulling it close on the rope and letting it drift further by releasing line. This is done to allow players to have enough slack to reach higher areas while then being able to pull the chariot up after, and also to be able to let the chariot hang down to collect gems. If not used correctly this can ruin your day and has ruined my crawling strategy more than once.

Throughout the levels, the game combines a mix of cave exploration, which changes with each new region visited and additional challenges that open up with completion of the different level sections. The player collects gems, with other special upgrades in levels unlocked through hidden skulls. Player must also seek out scrolls to open more tools useful in level progression. Once players have crawled through a cave section they then return to the home area. Once home, players find the undead skeleton assistant who makes witty remarks, wears a funny hat, and has a goofy grin on his face. I love that guy and you should too-after all, who does not love a comical, undead skeleton?

As the player progresses through the levels, small enemies are drawn to the chariot who attempt to rob precious gems from the player’s collection. I did not find these guys to be all that difficult as I beat them with my cleaver again and again until they were all gone. That is how you deal with thieves like a boss. This is not always easily done, however, since dropping the chariot makes noise and attracts additional enemies, so my advice is to drop it as little as possible. 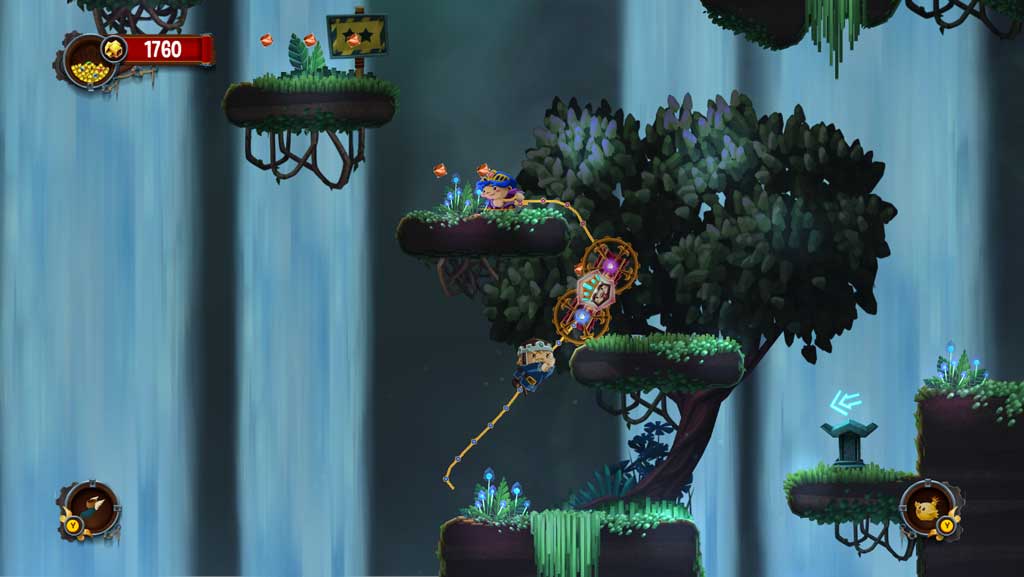 With so many positive elements in Chariot, it was somewhat difficult finding negative criticisms. The primary negatives I could see in Chariot relate to a couple areas: co-op mode, the musical score, and dialogue. Having a game with single-player and co-op modes means that players have the option of how they approach the game, however, in the game some areas are clearly marked as co-op so the treasures there can only be retrieved in conjunction with another player. This is great, but I do not have another person to play with, so I will not be able to get the treasures or achievements related to these. That puts single players at a disadvantage and punishes them for a lack of a buddy, as well as torturing OCD collector gamer types like myself who want those damn gems. For the musical score, I mentioned that the game has a catchy score, but it cycles so much with the same material that it gets old pretty fast. Dialogue options are done pretty well but are somewhat limited. I believe the key in a platformer game with basic repetitive mechanics is to have the other features take up the slack. This was not done as well as it could have been here.

Chariot is beautiful and fun to play for platformer lovers for short periods, but the game could have a little more content to really make it an excellent play experience. Couch co-op is definitely an area I respect in the game, but without friends around it is not easy to maximize the game’s potential. Despite drawbacks, I do look forward to additional content releases for the game in the future, as well as an online matchmaking capability.

Snowfall is here and it is time to cheer! Sorry about that… As different video games pump out their holiday events, plenty get swept under the radar. If you are tired from playing the multiple FPS holiday events … END_OF_DOCUMENT_TOKEN_TO_BE_REPLACED

Amazon Prime members can get free games and free in-game content every month that last a certain amount of time. You can jump over to Amazon to sign-up for an account or navigate to the Prime Gaming section to see … END_OF_DOCUMENT_TOKEN_TO_BE_REPLACED

Do so, and you’ll probably find that T END_OF_DOCUMENT_TOKEN_TO_BE_REPLACED

I remember when I played my first Resident Evil. It was a gift and couldn’t wait to get it running in my old PS1. That old Capcom “this game contains scenes of explicit violence and gore” plastered on the … END_OF_DOCUMENT_TOKEN_TO_BE_REPLACED

At the beginning of one mission, you are marked for dead by the organization you work for. Your handler has no idea what happened but informs you that they are coming for … END_OF_DOCUMENT_TOKEN_TO_BE_REPLACED

The history of gaming isn’t that old compared to other artistic and entertainment mediums. Many people have lived through the entirety of video game history, and more people have seen most of it. As such, you’d think that the … END_OF_DOCUMENT_TOKEN_TO_BE_REPLACED

(Updated 4/18/22) Even at a time when it feels like every game is being adapted into a show or movie, the news that Twisted Metal is being turned into a TV series stands out. Why? Well, it probably has … END_OF_DOCUMENT_TOKEN_TO_BE_REPLACED

(Updated 4/15/22) The reveal of the Mortal Kombat movie trailer and news that Street Fighter characters are joining the Fortnite roster has both legendary franchises on the minds of gamers everywhere. So, it’s only natural that fans have also … END_OF_DOCUMENT_TOKEN_TO_BE_REPLACED

Snowfall is here and it is time to cheer! Sorry about that… As different video games pump out their holiday events, plenty get swept under the radar. If you are tired from playing the multiple FPS holiday events … END_OF_DOCUMENT_TOKEN_TO_BE_REPLACED

Welcome ghouls, beasts, tricksters, and every horrific being known to man. The spooky season is upon us and I figured I would indulge in the festivities in my own way. Thus, I have come up with a satirical take on … END_OF_DOCUMENT_TOKEN_TO_BE_REPLACED