The indie scene’s obsession with roguelike elements continues with Rogue Shooter, an old-school FPS with permadeath, random levels, and lots of awesome weapons to be found. Rogue Shooter follows in the footsteps of Tower of Guns from earlier this year by trying to combine roguelike elements with FPS gameplay, but where Tower of Guns‘ old-school sensibilities were more Quake, Rogue Shooter goes further back in time by making a game that plays a lot like Doom.

Like most roguelites these days, Rogue Shooter has you trying to survive as long as you can in a procedurally-generated death labyrinth of increasingly dangerous monsters. You are sent to a research station in deep space that consists of 100 floors, on the standard difficulty, filled with aliens, escaped mutant test subjects, and violent robots. You start by picking a class, called “backgrounds” here, and a single passive perk. As with many games in the genre, there is a progression system that gives you access to new features for future attempts. In this case you’ll find “Intel” scattered around the floors that unlock new backgrounds, crafting recipes, data on enemies, and email logs that uncover the game’s rather tongue-in-cheek lore. 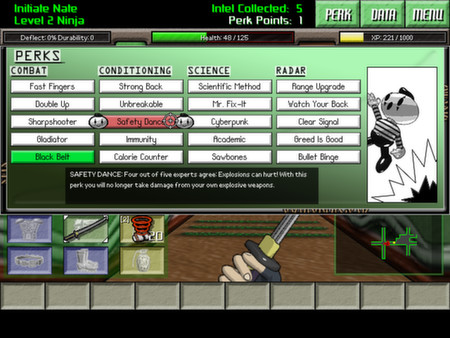 The game has sixteen backgrounds and around twenty perks altogether, with only a few being unlocked at the start. Your background only really determines starting gear and don’t have any special abilities, which is a bit disappointing. You also get to choose an additional perk each time your character levels, allowing you to customize your character a bit depending on what sort of items you find. Backgrounds range from pretty standard, like the Soldier who starts with an assault rifle, armor, and a ton of ammo, to the truly unorthodox. One such example is the Tourist, who starts with a Hawaiian shirt and no weapons. Instead, he gets a camera with a flash on it that stuns enemies, allowing you to more easily kick them to death with the good old “mighty boot” melee attack.

The items and weapons you come across can be just as mundane or bizarre, and are definitely the game’s biggest highlight. Pistols, assault rifles, miniguns, and shotguns of all types can be found alongside such oddities as Shotgun Tridents that stab the enemy before delivering a shotgun shell to the face or Dog Launchers that do exactly what they say on the tin. Thor’s Hammer is a particular favorite of mine, which sends out a massive wave of thunder and lightning that obliterates pretty much everything in front of you. The game has dozens of weapons to find, and most of them are genuinely fun to use in one way or another. 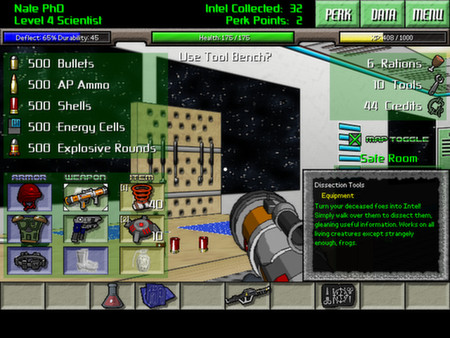 A number of secondary items exist that can be found or made with the game’s rudimentary crafting system, typically coming in the form of utility gadgets, grenades, or stims of some description. Automated turrets, frag grenades, combat stims that increase damage for the current floor, medkits, and cloaking devices are but a handful of the potential support items you will come across. The crafting system is really basic, only consisting of combining two items. Ingredients come in the form of Mass and Catalysts. Mass plus Stimulant equals a stim, for example, with the type of stim created being determined by what type of Mass you used. It could use some extra items and more complexity to it like in other games of the genre, but it still gets the job done.

You’ll find pieces of armor too, with slots for head, chest, and waist armor that give you damage reduction and maybe some passive effects. Boots also exist, and modify the damage of your kicks. One annoyance I have with all the items is a lack of detailed stats like you’d expect in an RPG. You’ll find things like +5 Rocket Launchers or +11 Utility Belts, but it doesn’t really tell you detailed information on what those stat bonuses do. As a gamer that loves to binge on ARPGs like Torchlight and Diablo, I want extremely detailed loot stats that tell me exactly how it improves my character. The only items that do give you decent stats are the pieces of armor, which will tell you damage reduction percentages.

When I said that the core gameplay was reminiscent of Doom and other shooters of the ’90s, I meant it. The game has no vertical look/aiming, your character can move very fast, the hit detection has that same rudimentary feel of early shooters with no damage modifiers based on what part of the body you shoot, and all the enemy attacks are projectiles that can be dodged if you are skilled enough. The animations and graphics even have an outdated clunkiness to them like shooters of old, something that people will either love or hate depending on how nostalgic they are of Doom and Wolfenstein 3D. I find it refreshing myself, and even though the mechanics are intentionally dated, the game still manages to be loads of fun in hour-long bursts. It helps that so many of the guns are creative and satisfying to use. 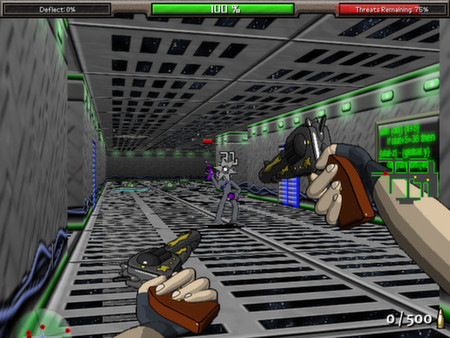 Sadly, the game didn’t go old-school enough in some places, and failed to update where needed in others. Your inventory may consist of ten slots at the start, but you can only have two weapons actually equipped at once, as well as only three support items. Considering the sheer number of awesome guns you’ll find in any given playthrough, being limited to only two equipped at once quickly becomes rather frustrating. On top of that, going to your inventory screen doesn’t pause the game, so switching out weapons when one breaks or runs out of ammo can be risky. Where the game fails to update to modern standards is the options menu, which has a general lack of decent resolution options and doesn’t save properly, so you’ll need to tweak your settings again each time you start the game.

Even with my complaints, Rogue Shooter is still well-worth checking out if you really dig the emerging “roguelite” genre like I do. The shooting mechanics and animations might be intentionally outdated, but they are outdated in that refreshingly old-school way that has been getting popular among indie games these past few years. Rogue Shooter has lots of replayability, a ton of unique weapons, and a reasonable price at only $10. I’ll continue to return to it as one of my go-to games to pass the time during lengthy game downloads/patches. You can currently find it on Steam.

Snowfall is here and it is time to cheer! Sorry about that… As different video games pump out their holiday events, plenty get swept under the radar. If you are tired from playing the multiple FPS holiday events … END_OF_DOCUMENT_TOKEN_TO_BE_REPLACED

Amazon Prime members can get free games and free in-game content every month that last a certain amount of time. You can jump over to Amazon to sign-up for an account or navigate to the Prime Gaming section to see … END_OF_DOCUMENT_TOKEN_TO_BE_REPLACED

Do so, and you’ll probably find that T END_OF_DOCUMENT_TOKEN_TO_BE_REPLACED

I remember when I played my first Resident Evil. It was a gift and couldn’t wait to get it running in my old PS1. That old Capcom “this game contains scenes of explicit violence and gore” plastered on the … END_OF_DOCUMENT_TOKEN_TO_BE_REPLACED

At the beginning of one mission, you are marked for dead by the organization you work for. Your handler has no idea what happened but informs you that they are coming for … END_OF_DOCUMENT_TOKEN_TO_BE_REPLACED

The history of gaming isn’t that old compared to other artistic and entertainment mediums. Many people have lived through the entirety of video game history, and more people have seen most of it. As such, you’d think that the … END_OF_DOCUMENT_TOKEN_TO_BE_REPLACED

(Updated 4/18/22) Even at a time when it feels like every game is being adapted into a show or movie, the news that Twisted Metal is being turned into a TV series stands out. Why? Well, it probably has … END_OF_DOCUMENT_TOKEN_TO_BE_REPLACED

(Updated 4/15/22) The reveal of the Mortal Kombat movie trailer and news that Street Fighter characters are joining the Fortnite roster has both legendary franchises on the minds of gamers everywhere. So, it’s only natural that fans have also … END_OF_DOCUMENT_TOKEN_TO_BE_REPLACED

Snowfall is here and it is time to cheer! Sorry about that… As different video games pump out their holiday events, plenty get swept under the radar. If you are tired from playing the multiple FPS holiday events … END_OF_DOCUMENT_TOKEN_TO_BE_REPLACED

Welcome ghouls, beasts, tricksters, and every horrific being known to man. The spooky season is upon us and I figured I would indulge in the festivities in my own way. Thus, I have come up with a satirical take on … END_OF_DOCUMENT_TOKEN_TO_BE_REPLACED