Solitairica Is A Fun Game With An Identify Crisis

For the sake of full disclosure, I will now admit that I’m a shameless roguelike and roguelite fan. Even though the definition of what constitutes a game in these genres grows a little larger each day, the fact is that any game that offers a random series of events built around a permanent death system will usually still get about 10 hours of playtime from me at a minimum.

Still, I’d be lying if I said I wasn’t a bit trepidatious going into Solitairica. I’m willing to buy into just about any premise that even vaguely follows the rules of the Rogue genre, but a game billing itself as a “roguelike solitaire experience?” Even I have my doubts about how that would translate into a proper rogue game.

In a way, these fears hold true after playing the game. Solitairica is not a roguelike or roguelite game. Not really. About the closest it comes to the genre is the randomization of its enemies and rewards, though the method in which it presents these elements is not too different from a standard RPG game. You make your way through a very simple medieval fantasy story in the hopes of challenging an evil emperor, and along the way you fight random enemies by playing a modified version of spider solitaire. If you really wanted to stretch the term, you could qualify the game’s progression as roguelike, but honestly, this game has no reason to bill itself as a member of that genre. 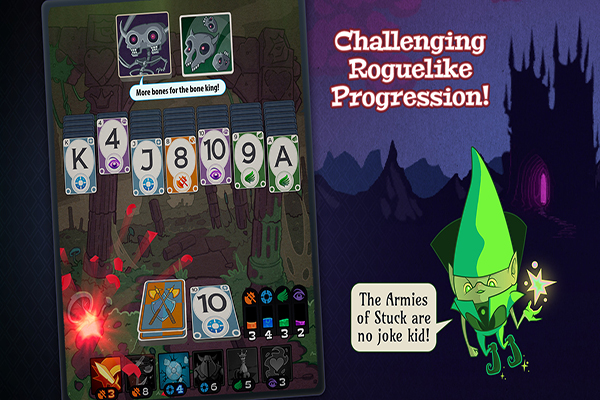 Instead, Solitairica is more of an update on the Puzzle Quest concept. In fact, it’s actually fairly identical to that game in the way that it handles presentation, combat and progression elements. The difference – as you’ve no doubt guessed by now – is that Puzzle Quest used a modified match-three puzzle system in place of traditional combat, whereas Solitairica uses a modified version of spider solitaire. If you’re wondering how exactly the one-player game of solitaire translates into a competitive battle system, the answer is, “Fairly well, actually.”

For the most part, the solitaire elements in the game are identical to the classic game. Anyone familiar with the rules of spider solitaire will have no trouble jumping right in. Where Solitairica updates the concept is through the introduction of mechanics assigned to certain cards that denote combat abilities. For instance, you may have a series of cards that are assigned attack abilities. Match these cards to the top row, and you will receive points towards your attack spell. Execute that attack spell, and you deal damage to your opponent. Cards can also be assembled into themed decks like in a CCG title in order to emphasize certain playstyles, and you have the ability to upgrade your cards to increase their effectiveness.

The reason that this system works as well as it does is because it’s essentially just a game of solitaire. There are a couple of minor deviations to the formula – such as the notion of taking turns and the presence of secondary items that can benefit bad hands – but at its core, this is an updated version of the classic game that PC gamers have been playing since they discovered Microsoft included Windows. 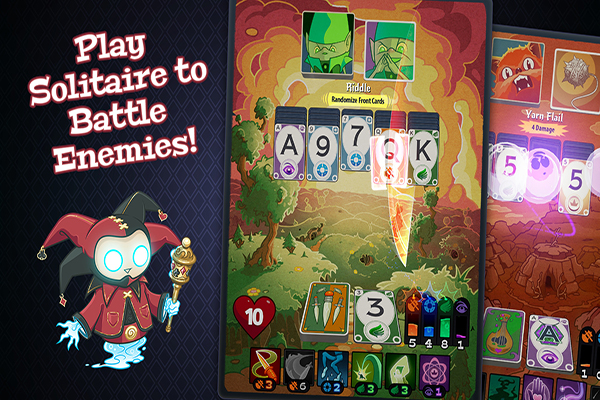 While the fact that this game only seeks to enhance the solitaire experience as opposed to completely reinvent it is the main reason that it’s as addictive as it is – and believe me, the game is just as addictive as solitaire can be – it’s also the reason for the game’s biggest fault: its reliance on luck. Much like an actual game of solitaire, sometimes the cards just don’t fall your way in this game. That, combined with the game’s sometimes unfair random enemies, results in battles you simply can’t win if things don’t go your way.

A touch of that quality can add to the experience in games like this, but there are many times when Solitairica abuses the privilege my disguising its randomness as intended difficulty. Too many of these types of winless games in a row, and you’ll have no problem putting the game down and walking away.

Still, there is a lot of simple fun to be found in this surprisingly bountiful game. Anyone who considers themselves to be a diehard solitaire or Puzzle Quest fan will find more than enough content here to justify the hours you’ll spend coming back for casual playthroughs, but those hoping for something more skill-based need not apply.

As the World Cup is nearing the end … END_OF_DOCUMENT_TOKEN_TO_BE_REPLACED

Do so, and you’ll probably find that T END_OF_DOCUMENT_TOKEN_TO_BE_REPLACED

I remember when I played my first Resident Evil. It was a gift and couldn’t wait to get it running in my old PS1. That old Capcom “this game contains scenes of explicit violence and gore” plastered on the … END_OF_DOCUMENT_TOKEN_TO_BE_REPLACED

At the beginning of one mission, you are marked for dead by the organization you work for. Your handler has no idea what happened but informs you that they are coming for … END_OF_DOCUMENT_TOKEN_TO_BE_REPLACED

The history of gaming isn’t that old compared to other artistic and entertainment mediums. Many people have lived through the entirety of video game history, and more people have seen most of it. As such, you’d think that the … END_OF_DOCUMENT_TOKEN_TO_BE_REPLACED

(Updated 4/18/22) Even at a time when it feels like every game is being adapted into a show or movie, the news that Twisted Metal is being turned into a TV series stands out. Why? Well, it probably has … END_OF_DOCUMENT_TOKEN_TO_BE_REPLACED

(Updated 4/15/22) The reveal of the Mortal Kombat movie trailer and news that Street Fighter characters are joining the Fortnite roster has both legendary franchises on the minds of gamers everywhere. So, it’s only natural that fans have also … END_OF_DOCUMENT_TOKEN_TO_BE_REPLACED

Welcome ghouls, beasts, tricksters, and every horrific being known to man. The spooky season is upon us and I figured I would indulge in the festivities in my own way. Thus, I have come up with a satirical take on … END_OF_DOCUMENT_TOKEN_TO_BE_REPLACED

In 2020 it was revealed developer IO Interactive was working on a James Bond game known as Project 007 which, understandably, shook the video game world. Still in production, there’s a possibility that their James Bond game could be the … END_OF_DOCUMENT_TOKEN_TO_BE_REPLACED