STACKER Review: How High Can You Go? 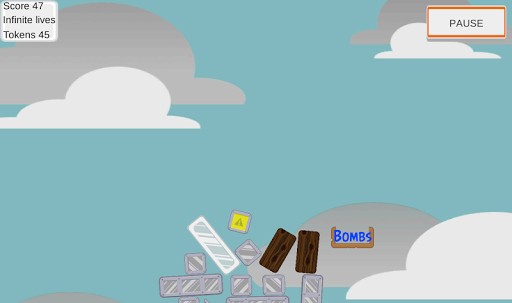 Stacker comes from Titanomachy Studios, a new company founded by a group at the University of Advancing Technology in Tempe, AZ. This is their first published game available on the Android store. So how does it stack up? (Pun intended.)

The overall concept of Stacker is straightforward and simple, making it an easy game to pick up and play. The game brings concepts found in classic games that build themselves around the physics of stacking objects while trying to avoid letting them topple. The goal is to create the most unsafe tower in existence; a feat not so easily done as the different shaped blocks do not always fit together so nicely. And, one wrong swipe of the finger or bad block placement can cause the whole thing to come crashing down. If that isn’t difficult enough, bombs are thrown into the mix to wreck all your hard work. But with the help of certain blocks that join together automatically, the player is aided in their quest for stacking mastery.

Simple as it is, Stacker is worth a shot. It’s one of those mobile games that’s fun in short stints. The initial goal of constructing the tower to its highest level to get the highest score is fun in the different modes, one in which players have limited lives and the other unlimited lives. The variety of blocks and challenges of the bombs are a nice touch that make the game more exciting, and goes nicely with the game’s catchy soundtrack.

Stacker’s art style stands out. The design comes off as cartoonish and retro, but I haven’t seen another game with the same look Stacker. In the game, colors are muted and subtle, making the whole process of stacking less nerve-racking, especially when set against a peaceful sky background.

Amidst the game’s good qualities, I found some areas where I would suggest future improvements. First, I would like to see more variety in music offered since the tune continuously loops. Second, I would suggest two gameplay features: leaderboards and challenge modes – like head-to-head combat against other stackers and maybe even a mode where one player throws in the blocks that another has to stack.

As it stands now, I think adding elements like these would give it longer lasting gameplay and make the score seem more meaningful. Lastly, the camera sometimes moves too far above the top of the tower where the stacking is taking place so it is hard to see what I am stacking on. This makes it difficult to plan upcoming moves, especially when the stacked pile becomes too tall.

For a first title release from a new studio, Stacker is not a bad offering to the mobile market. Additional features would make the game even better and push longevity. I anticipate playing it again when I can pick it up and challenge friends to be the best stacker out there.

Do so, and you’ll probably find that T END_OF_DOCUMENT_TOKEN_TO_BE_REPLACED

I remember when I played my first Resident Evil. It was a gift and couldn’t wait to get it running in my old PS1. That old Capcom “this game contains scenes of explicit violence and gore” plastered on the … END_OF_DOCUMENT_TOKEN_TO_BE_REPLACED

At the beginning of one mission, you are marked for dead by the organization you work for. Your handler has no idea what happened but informs you that they are coming for … END_OF_DOCUMENT_TOKEN_TO_BE_REPLACED

The history of gaming isn’t that old compared to other artistic and entertainment mediums. Many people have lived through the entirety of video game history, and more people have seen most of it. As such, you’d think that the … END_OF_DOCUMENT_TOKEN_TO_BE_REPLACED

(Updated 4/18/22) Even at a time when it feels like every game is being adapted into a show or movie, the news that Twisted Metal is being turned into a TV series stands out. Why? Well, it probably has … END_OF_DOCUMENT_TOKEN_TO_BE_REPLACED

(Updated 4/15/22) The reveal of the Mortal Kombat movie trailer and news that Street Fighter characters are joining the Fortnite roster has both legendary franchises on the minds of gamers everywhere. So, it’s only natural that fans have also … END_OF_DOCUMENT_TOKEN_TO_BE_REPLACED

In 2020 it was revealed developer IO Interactive was working on a James Bond game known as Project 007 which, understandably, shook the video game world. Still in production, there’s a possibility that their James Bond game could be the … END_OF_DOCUMENT_TOKEN_TO_BE_REPLACED

The history of gaming isn’t that old compared to other artistic and entertainment mediums. Many people have lived through the entirety of video game history, and more people have seen most of it. As such, you’d think that the … END_OF_DOCUMENT_TOKEN_TO_BE_REPLACED

30+ years on, there’s somehow nothing quite like an NES action game. From the soundtracks to the level design and airtight mechanics, classic NES games like Ninja Gaiden and Mega Man remain some of the absolute best the medium … END_OF_DOCUMENT_TOKEN_TO_BE_REPLACED