I would say that Steam Marines is the latest entry in the ever-popular roguelike/roguelite/procedural deathmaze simulator genre, but according to my calculations approximately 5.7 new games fitting that description have been released since I started typing. In any case, Steam Marines differs a little from most games of the genre by giving you a squad of four marines at the start instead of just a single character like other roguelikes. The turn-based squad tactics that have you traveling through the dinghy corridors of a derelict spaceship feels a lot like X-Com or Space Hulk, and just like in those games, your little squad of soldiers will die horribly soon enough.

My first attempt at Steam Marines ended on the first floor of the ship. Partly because the game is brutally difficult, as is par the course for the genre, but also because the tutorial is downright abysmal. It only really tells you how you spend action points to move your marines around, shoot things, and use a guard stance that has your marines opening fire on enemies that enter their range and line of sight during the enemy turn. Concepts like the promotion and inventory, damage types and resistances, and more are things you will need to figure out yourself, which is no small feat considering how clunky some parts of the UI are.

As with most roguelikelite-style games, Steam Marines expects you to slam your head against a wall a few times to teach you that it hurts, and I can’t help but feel that a lot of the early difficulty of these games could be mitigated by just properly teaching players how it works instead of just dropping you in to die right away. Also, those gamers who obsess over scoreboards will find Steam Marines downright maddening, as the scoring system rewards speed and aggression while the actual gameplay requires you to be slow and cautious to avoid all the horrible death. 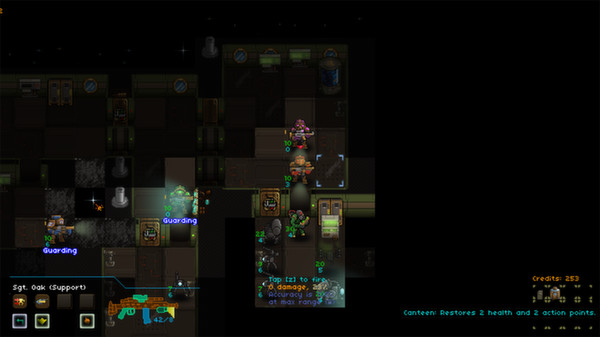 Eventually you’ll figure out how everything works and might actually make it past the first few floors. There are five different marine classes that are differentiated by the type of weapon they carry and their starting stats. As your marines level up you can choose perks and assign skill points. Generally each level up has you choose between either a special attack that can be performed at the expense of a few action points or a passive. None of the upgrades are particularly deep, but still varies things up enough to have your individual marines specialize in a particular aspect of combat. As I hinted at earlier, once a marine dies then they are dead for good. You’ll occasionally find survivors that you can add to your squad to replace your fallen comrades, but they are always worse than whoever they are replacing.

Levels are full of lockers, chests, and other containers with useful items that range from consumables that restore health and/or AP to grenades and new weapons or mods that you can equip your marines with. Mods are another aspect that the tutorial doesn’t adequately explain, but it boils down to passives you can switch between on your guns that have various effects like increasing view distance or accuracy. Your inventory is very limited and, annoyingly enough, you can’t check out what item you are about to pick up, so if that gun you just grabbed is worse than what your marine has already then you’ll need to spend precious AP to drop it so it isn’t hogging space that could be devoted to more recovery items or grenades. Some of the coolest and most powerful items come in the form of the giant mech exoskeletons shown in the trailer, so pray you’re lucky enough to find some.

Once you get past all the learning curves, you’ll find a pretty solid turn-based strategy game in Steam Marines. One of the more interesting tactics at your disposal is the ability to bust down walls. The tactical significance of breaking down a wall to hit an enemy from the rear is pretty obvious, as is the constant fear that enemies will flank you by doing the same. One of the more satisfying aspects of this is the ability to knock enemies into space. This mechanic is also required to access some areas. The random level generator has its fair share of kinks to work out and seems to create oddly-placed rooms with no doors pretty frequently. 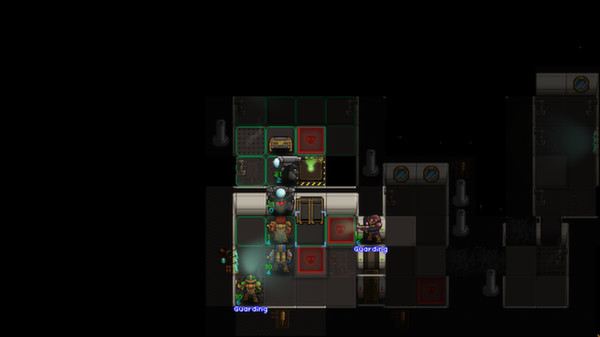 It’s a bit rough around the edges, but Steam Marines is still a pretty good squad-based tactics game that harkens back to PC gaming classics of the ’90s. It doesn’t do a lot to stand out amongst the flood of brutally hard permadeath torture simulators on the market, but it is solid enough to recommend to fans of the genre looking for a serious challenge. You can find Steam Marines on Steam for $15.

Snowfall is here and it is time to cheer! Sorry about that… As different video games pump out their holiday events, plenty get swept under the radar. If you are tired from playing the multiple FPS holiday events … END_OF_DOCUMENT_TOKEN_TO_BE_REPLACED

Amazon Prime members can get free games and free in-game content every month that last a certain amount of time. You can jump over to Amazon to sign-up for an account or navigate to the Prime Gaming section to see … END_OF_DOCUMENT_TOKEN_TO_BE_REPLACED

Do so, and you’ll probably find that T END_OF_DOCUMENT_TOKEN_TO_BE_REPLACED

I remember when I played my first Resident Evil. It was a gift and couldn’t wait to get it running in my old PS1. That old Capcom “this game contains scenes of explicit violence and gore” plastered on the … END_OF_DOCUMENT_TOKEN_TO_BE_REPLACED

At the beginning of one mission, you are marked for dead by the organization you work for. Your handler has no idea what happened but informs you that they are coming for … END_OF_DOCUMENT_TOKEN_TO_BE_REPLACED

The history of gaming isn’t that old compared to other artistic and entertainment mediums. Many people have lived through the entirety of video game history, and more people have seen most of it. As such, you’d think that the … END_OF_DOCUMENT_TOKEN_TO_BE_REPLACED

(Updated 4/18/22) Even at a time when it feels like every game is being adapted into a show or movie, the news that Twisted Metal is being turned into a TV series stands out. Why? Well, it probably has … END_OF_DOCUMENT_TOKEN_TO_BE_REPLACED

(Updated 4/15/22) The reveal of the Mortal Kombat movie trailer and news that Street Fighter characters are joining the Fortnite roster has both legendary franchises on the minds of gamers everywhere. So, it’s only natural that fans have also … END_OF_DOCUMENT_TOKEN_TO_BE_REPLACED

Snowfall is here and it is time to cheer! Sorry about that… As different video games pump out their holiday events, plenty get swept under the radar. If you are tired from playing the multiple FPS holiday events … END_OF_DOCUMENT_TOKEN_TO_BE_REPLACED

Welcome ghouls, beasts, tricksters, and every horrific being known to man. The spooky season is upon us and I figured I would indulge in the festivities in my own way. Thus, I have come up with a satirical take on … END_OF_DOCUMENT_TOKEN_TO_BE_REPLACED