Being a game that is neither Pokemon nor published by Nintendo, Tembo the Badass Elephant is quite the departure from what Game Freak is usually best known for, and boy did it have a rocky start. The PS4 version was accidentally listed at $40 for a few hours, and the PC version was hit with a double whammy of problems involving the full version not being uploaded properly and missing .exe files. Luckily, all those issues are in the past and Tembo turned out to be a pretty solid action platformer.

The idyllic Shell City has been invaded by the evil Phantom army. The leader of Shell City’s military calls in Tembo, a retired special ops pachyderm and former squad mate, to smash his way through hordes of invaders and rescue captured civilians across 17 levels and four acts. Tembo’s repertoire of moves all revolve around smashing, dashing, and slamming your way through all manner of enemies, objects, and barricades, with a few other elephant-themed powers like shooting water from his trunk to put out fires or make certain plants grow to solve jumping puzzles. 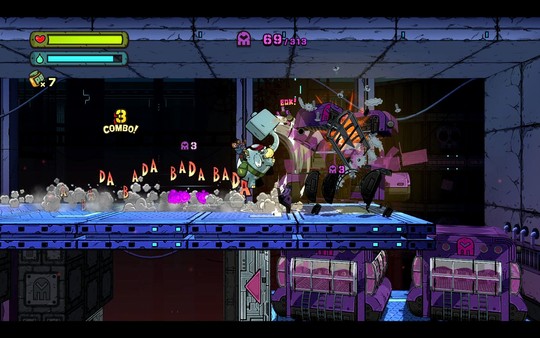 The game is at its best in these early stages, which often give you the opportunity to really cut loose with Tembo’s destructive power. Your primary means of movement and attacking is a dash ability mapped to the Square button by default, and you can build up a surprising amount of speed in places. There are points where Tembo almost feels like an old 2D Sonic game, to a degree. These influences become even more apparent when you get to the really fun pinball-like platforming puzzles in the third act. The sheer amount of destruction you can cause in these early levels is extremely satisfying, it’s just a shame that not every level allows you to truly revel in Tembo’s power.

Sadly, the further you get into the game the more you start to encounter fairly generic, bog-standard jumping puzzles and platforming. Tembo’s ability to squirt water on objects becomes more commonly used in timed jumping puzzle sequences, and the game breaks out the dreaded conveyor belt obstacle course platforming tropes. The last stretch of levels in particular really ramp of the difficulty and focus more on precision platforming and almost bullet hell-esque sequences where the game just throws a ton of enemies at you. Combined with the game’s stingy health drops and sparse checkpoints, the later stages often feel cheap and needlessly difficulty, like the developers decided midway through that they wanted to cater a bit more to the torture platformer crowd. The boss fights in particular get irritating as they are lengthy, multi-round affairs devoid of health drops or any sort of mid-battle checkpoints. 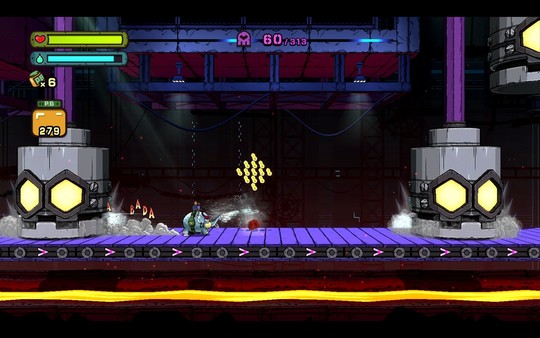 Another complaint I have involves the actual controls. Around three different moves are mapped to the Square button, while about half of the other buttons on the controller go unused. There is no way to remap the controls in any way besides a few presets, all of which still map these three moves to a (button) + direction input combination. During particularly hectic bits, like the aforementioned timed jumping puzzles or bullet hell segments, it can be frustratingly easy to perform the wrong move.

I’ve seen some other people complaining about the way the game gates content, but it honestly didn’t bother me. Each location typically involves three stages with two additional stages requiring you to get a certain number of points before unlocking them. Some people have expressed frustration at having to replay levels to grind for the points necessary to progress, but I never once ran into a situation where I needed to revisit previous levels because I didn’t have enough points to continue, and I suck at this game. In any case, the entire game will probably take you between four to six hours to complete. Going back to get perfect scores in each level and finding all the captured civilians will likely add another few hours or so. 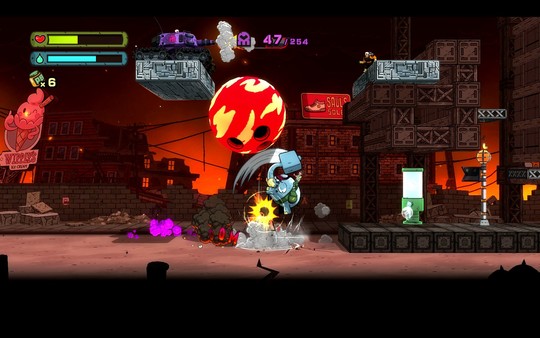 I also have to praise the game’s sound design and visual aesthetic. The graphics and animation quality in particular are great. The whole game looks like a moving comic book, with onomatopoeias appearing in sync with sound effects like Tembo’s trampling dash attack or ground slams. The handful of cutscenes are all created in the style of a comic book page and often involve no spoken dialogue. The soundtrack is suitably bombastic for a game about an elephant rampaging through cities and enemy bases, and includes lots of drums, horns, and trombones.

While I may have sounded harsh at times in my review, I really did enjoy Tembo the Badass Elephant and would recommend it to anyone looking for a solid action platformer. My main issues really revolve around the fact that later levels put a bit less emphasis on the fast-paced rampaging and destruction of those early stages. It’s almost like Game Freak got worried halfway through that Tembo didn’t have enough “traditional” platforming elements and starting throwing them in, even though it started to detract from the game’s biggest strengths. None of my complaints are particularly game-breaking though, and as a whole Tembo is a worthy addition to your library. You can currently get the game for $15 on Steam, PS4, and Xbox One.

Do so, and you’ll probably find that T END_OF_DOCUMENT_TOKEN_TO_BE_REPLACED

I remember when I played my first Resident Evil. It was a gift and couldn’t wait to get it running in my old PS1. That old Capcom “this game contains scenes of explicit violence and gore” plastered on the … END_OF_DOCUMENT_TOKEN_TO_BE_REPLACED

At the beginning of one mission, you are marked for dead by the organization you work for. Your handler has no idea what happened but informs you that they are coming for … END_OF_DOCUMENT_TOKEN_TO_BE_REPLACED

(Updated 4/18/22) Even at a time when it feels like every game is being adapted into a show or movie, the news that Twisted Metal is being turned into a TV series stands out. Why? Well, it probably has … END_OF_DOCUMENT_TOKEN_TO_BE_REPLACED

(Updated 4/15/22) The reveal of the Mortal Kombat movie trailer and news that Street Fighter characters are joining the Fortnite roster has both legendary franchises on the minds of gamers everywhere. So, it’s only natural that fans have also … END_OF_DOCUMENT_TOKEN_TO_BE_REPLACED

The Legend of Zelda: Breath of the Wild’s critical acclaim is often met with the counter of being “overrated” by some players. There are usually numerous reasons for this – both notable and ridiculous – but one of the … END_OF_DOCUMENT_TOKEN_TO_BE_REPLACED

(Updated 4/18/22) Even at a time when it feels like every game is being adapted into a show or movie, the news that Twisted Metal is being turned into a TV series stands out. Why? Well, it probably has … END_OF_DOCUMENT_TOKEN_TO_BE_REPLACED

(Updated 4/15/22) The reveal of the Mortal Kombat movie trailer and news that Street Fighter characters are joining the Fortnite roster has both legendary franchises on the minds of gamers everywhere. So, it’s only natural that fans have also … END_OF_DOCUMENT_TOKEN_TO_BE_REPLACED

Do so, and you’ll probably find that T END_OF_DOCUMENT_TOKEN_TO_BE_REPLACED