The Weaponographist Review: Fast-Paced Dungeon-Crawling With A Side of Carpal Tunnel 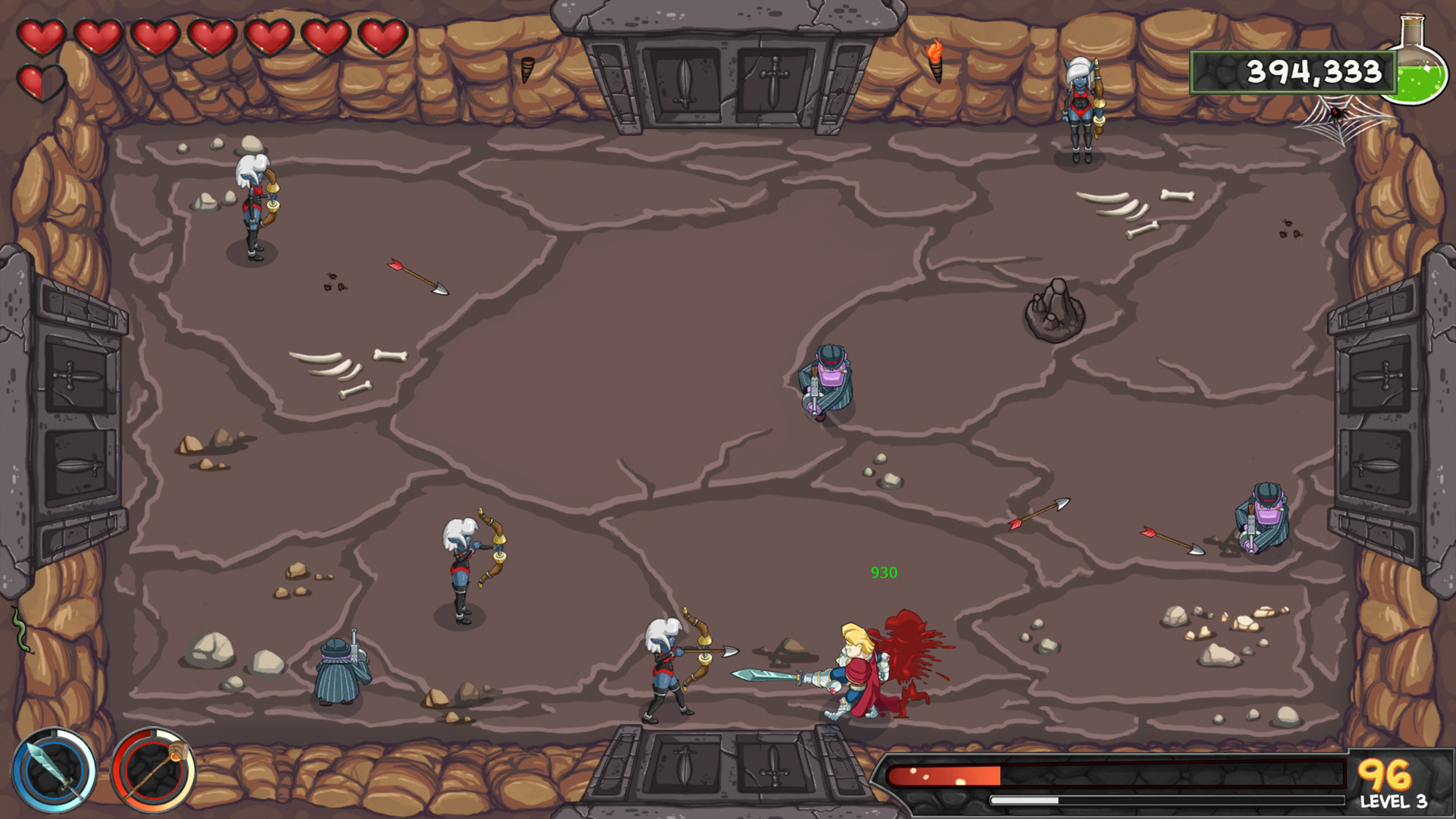 If anything is to be taken from The Weaponographist, it’s that you shouldn’t be a greedy, narcissistic knobhead in the company of witches. If only Doug McGrave wasn’t such an asshat and just saved the damn village like a good little video game protagonist then maybe he wouldn’t have been cursed to have all material possessions turn to ash in his hands. Thus we have the setup for The Weaponographist, a top-down arena dungeon-crawler with a rather unique hook: Your weapons constantly degrade and break due to the witch’s curse, thus forcing you to continuously juggle between a wide variety of weapons that range from the mundane to the truly bizarre and equally hilarious.

The overall goal in The Weaponographist is the conquer a dungeon full of demons and other assorted monsters threatening a small village named Hellside. No, the game doesn’t take itself seriously at all. The dungeon is divided into five floors, with each containing upwards of a dozen or so rooms and a boss battle at the end. The town itself is a hub full of vendors where you can spend Demon Goop acquired from dead enemies to purchase upgrades.

One could be forgiven for immediately comparing the game to The Binding of Isaac after a cursory glance over some screenshots, but the two games have quite a few differences. The Weaponographist isn’t as focused on exploration, with no branching paths or secrets to be found. It’s more of a linear set of arenas where you fight waves of enemies before moving to the next room. The Weaponographist also lacks permadeath, with failure only kicking you back to town. The dungeon has checkpoints every five or so rooms, and each checkpoint can be used up to three times before you need to use a different checkpoint or restart from the beginning of the floor. While more forgiving than similar Roguelikelitethings, that doesn’t make The Weaponographist easy.

The combat is very simple, but fast and heavily reliant on skill and positioning. As I said before, the main hook is that weapons quickly degrade with use, forcing you to constantly pick up another one from fallen enemies. This weapon degradation adds a nice layer of strategy and forces you to figure out to use the game’s rather large and varied arsenal. The weapon variety is definitely one of the game’s strongest features, and a big part of the fun in beating a floor is seeing what new weapons enemies will drop in the next set of levels.

Actually, I have to admit that I’m surprised just how unique The Weaponographist‘s arsenal is. Weapons range from the standard stuff like swords and spears, to the downright unorthodox like pogo sticks that send out shockwaves, killer yo-yos, and unicorn horns that fire bolts of explosive rainbows. Some tougher enemies also drop spells, which act like a secondary heavy weapon that typically only has one or two shots. These spells are almost always bizarre and extremely satisfying, like decapitated siren heads that fire massive cones of sound that deal damage and slam enemies backwards.

Enemy variety is just as impressive and nonsensical, with all manner of strange creatures. You’ll see demons dressed as ’20s era mobsters with tommyguns, little goblins that throw bombs, lion tamers that are literally anthropomorphic lions, and many more. Hell, the first boss is a T-Rex with laser guns that vomits out enemies. Despite all this variety in enemy and weapon designs, The Weaponographist does an admirable job of making each unique and different in their own ways. Even enemies and weapons that have similar functions manage to be just different enough. While some weapons are certainly more useful than others, none of them felt pointless or redundant, with some requiring a much higher degree of skill and forethought to use properly.

Further enforcing the fast and frantic nature of combat is the combo and experience system. As you kill enemies, you’ll gain experience and eventually level up, granting passive buffs to your character. Pretty standard stuff so far. However, you bleed experience when you aren’t killing enemies, so you need to keep your combo going or you’ll start to lose levels. Getting hit also increases the rate at which you bleed experience. The combo system, combined with the weapon degradation, makes The Weaponographist a much faster-paced and hectic game than your typical arena roguelitelikething.

If I were to make complaints, it’s that The Weaponographist doesn’t really have much in the way of buffing your character while in the dungeon itself. You don’t find any passive items or gear, and your inventory will only ever consist of one weapon and one spell. Character progression is limited to buying upgrades in town, like increasing combo duration, movement speed, increasing the damage that you deal with specific weapons and spells, and so on. Every few floors will usually have a chest with some Goop and a power-up, but all your permanent progression is limited to stuff outside the dungeon itself.

Later upgrades also require fairly insane amounts of Goop, requiring you to grind for cash, so to speak. You’ll probably die quite a few times whenever you unlock a new floor until you can afford to buy the latest upgrades. It makes a very repetitive gameplay loop even more repetitive. I’d also throw in a little warning to anyone with carpal tunnel or other issues, as The Weaponographist has a lot of button mashing. I myself had issues playing the game for extended periods of time because of pain in my hands and wrists.

The Weaponographist offers a simple yet satisfying arena-based dungeon-crawling experience. The wide range of inventive and fun weapons, as well as the colorful cast of interesting enemies, helps stave off some of the game’s highly repetitive nature, but there is no getting around the fact that you are just killing waves of enemies in very samey rooms. I did really enjoy my time with the game, even if my thumbs now despise me. It’s worth a look if you are after a lighthearted top-down arena dungeon-crawling experience that is more forgiving and less serious than similar games in the genre. There are still a few days left to catch the 20% off launch sale, which brings the game down to a modest $8. You can find The Weaponographist right now on Steam and the Humble Store.

Snowfall is here and it is time to cheer! Sorry about that… As different video games pump out their holiday events, plenty get swept under the radar. If you are tired from playing the multiple FPS holiday events … END_OF_DOCUMENT_TOKEN_TO_BE_REPLACED

Amazon Prime members can get free games and free in-game content every month that last a certain amount of time. You can jump over to Amazon to sign-up for an account or navigate to the Prime Gaming section to see … END_OF_DOCUMENT_TOKEN_TO_BE_REPLACED

Do so, and you’ll probably find that T END_OF_DOCUMENT_TOKEN_TO_BE_REPLACED

I remember when I played my first Resident Evil. It was a gift and couldn’t wait to get it running in my old PS1. That old Capcom “this game contains scenes of explicit violence and gore” plastered on the … END_OF_DOCUMENT_TOKEN_TO_BE_REPLACED

At the beginning of one mission, you are marked for dead by the organization you work for. Your handler has no idea what happened but informs you that they are coming for … END_OF_DOCUMENT_TOKEN_TO_BE_REPLACED

The history of gaming isn’t that old compared to other artistic and entertainment mediums. Many people have lived through the entirety of video game history, and more people have seen most of it. As such, you’d think that the … END_OF_DOCUMENT_TOKEN_TO_BE_REPLACED

(Updated 4/18/22) Even at a time when it feels like every game is being adapted into a show or movie, the news that Twisted Metal is being turned into a TV series stands out. Why? Well, it probably has … END_OF_DOCUMENT_TOKEN_TO_BE_REPLACED

(Updated 4/15/22) The reveal of the Mortal Kombat movie trailer and news that Street Fighter characters are joining the Fortnite roster has both legendary franchises on the minds of gamers everywhere. So, it’s only natural that fans have also … END_OF_DOCUMENT_TOKEN_TO_BE_REPLACED

Snowfall is here and it is time to cheer! Sorry about that… As different video games pump out their holiday events, plenty get swept under the radar. If you are tired from playing the multiple FPS holiday events … END_OF_DOCUMENT_TOKEN_TO_BE_REPLACED

Welcome ghouls, beasts, tricksters, and every horrific being known to man. The spooky season is upon us and I figured I would indulge in the festivities in my own way. Thus, I have come up with a satirical take on … END_OF_DOCUMENT_TOKEN_TO_BE_REPLACED