This War of Mine Review: Grim, Depressing, & Highly Compelling

Every now and then, I’ll see people criticize a game for not being “fun.” One such example was 2012’s Spec Ops: The Line by Yager and 2K Games. Spec Ops was a grim deconstruction of the modern military shooter. It used very generic cover-based shooter gameplay to point out how absurd and rather disturbing games like Call of Duty and Battlefield actually are with their glorification of modern war and violence. I’ve always felt that a game doesn’t need to be “fun” to be compelling. Stressful, grim, challenging, brutal…Video games have the power to convey a lot of different feelings besides simply enjoyment and fun, and I find it odd that, despite gamers and game developers constantly talking about how they want games to be more respected as a mature artistic medium like movies or books, the criticism “but it isn’t very fun” still creeps into reviews and forum discussions when talking about more unconventional games. Papers, Please is one such game that I wouldn’t classify as being particularly enjoyable. It is certainly compelling, stressful, and depressing at times, but not fun. This War of Mine by 11 Bit Studios is another example of a game that I found little joy in playing…and you should totally play it too. 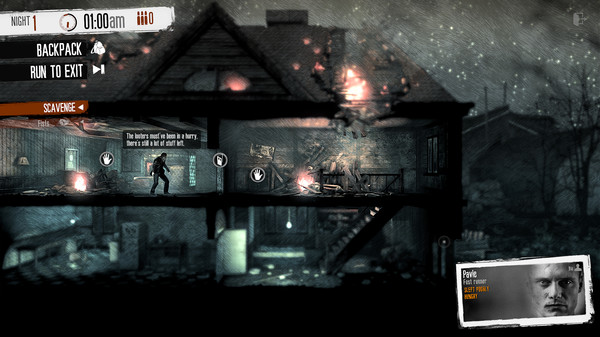 Where most war games task you with playing as the valiant soldiers defending the world from evil terrorists, This War of Mine puts you in the tattered shoes of the terrified civilians huddling together in bombed-out buildings while the combat rages around them. After years of unrest, a civil war has broken out in the fictional capital of a fictional country between the military and a group of separatists. You are dropped into the middle of all this with three civilians and only one objective: survive until the fighting stops, one day at a time.

The game is controlled with a simple point-n-click interface, with people and points of interest highlighted by various icons. You’ll spend your days taking care of your survivor’s needs and using whatever materials you can find to craft useful items and make improvements to your shelter. You can build pieces of furniture to make everyone as comfortable as possible and other necessities like stoves to cook food or furnaces to keep warm.

Once the basics are built, you can try to focus on building more complex appliances that allow you to craft luxury items like moonshine, cigarettes, and herbal remedies that can be used to improve the health and morale of your survivors or, more likely, traded with others for more valuable items like food or medicine. The game has an economy running in the background that determines how valuable certain items are at the time, and some things are more or less valuable depending on who you are trying to trade with. Soldiers and rebels alike are quite fond of decent booze and cigarettes. 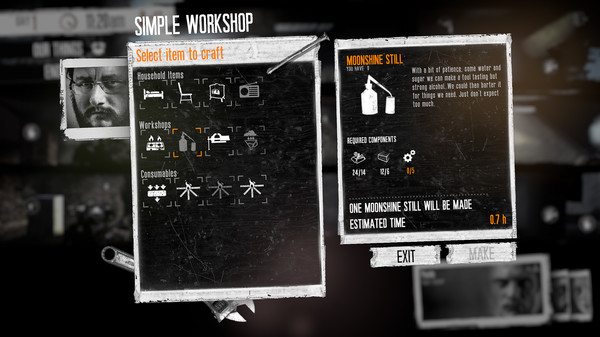 The other portion of the game takes place once the sun goes down. At night you can send out someone to scavenge for the supplies and materials that you need during the day. You pick a location to visit on a map of the city, with each location having a description that tells you a bit about what sort of materials you can expect to find and how potentially dangerous it might be. Some areas, like abandoned houses and markets, are relatively safe, but locations like occupied neighborhoods or military installations can be significantly more dangerous.

If you haven’t figured out by the subject matter, This War of Mine is incredibly grim and full of difficult moral quandaries that really have no right or wrong answer, but can lead to equally horrifying consequences that have an impact on both the story and mechanics. I remember the first time I had to resort to stealing. One of my survivors was ill, and both food and medicine were pretty low. The places I had been scavenging at were almost picked clean, and I couldn’t get to the locations with most of the traders because of increased fighting in the area. It was at that point that I had to break into the home of an elderly couple and steal the very food and medicine they needed to survive. I felt like a monster after that, and was too terrified to return for fear of finding them both dead.

These morally reprehensible acts that you might be driven to in the name of survival have just as much impact on your survivors. The person who I used to steal from the elderly couple was mentally broken for days, being unable to sleep and at several points talking about suicide. Everyone else wasn’t all that better off, with one of them being angry that the group had resorted to thievery and another reluctantly admitting that the stolen food and medicine probably saved them all. 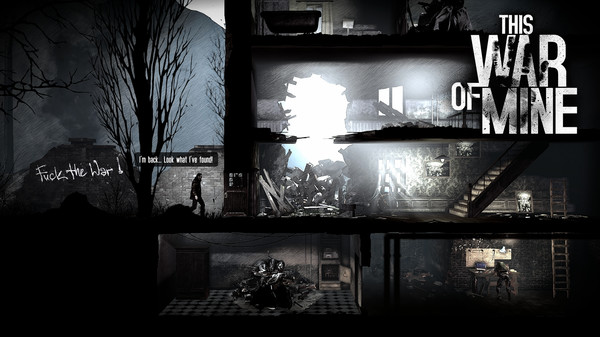 Rare as they might be, This War of Mine also has moments of triumph. Sometimes during the day you’ll be visited by traders or other civilians managing to scrape by in the neighborhood. Choosing to help other survivors may lead to them helping you in the future, and almost always makes your own group feel a bit better for managing to find something positive in an otherwise dark time. But then again, helping others isn’t always something your group can afford to do. Turning away a starving beggar because your own survivors are starving themselves, or holding on to your last bottle of medicine when faced with desperate children seeking help for their sick parents are the sort of agonizing decisions that you’ll most likely be forced to make.

One complaint I do have is how clunky the combat is, but at the same time I see what the developers were going for. Your characters aren’t supposed to be capable fighters, they are just normal, everyday people. Combat is always extremely risky. Even if your character survives a fight, they can be seriously injured physically or mentally and become a burden on the group. I understand that the developers didn’t want to make combat an easy, viable option, but at the same time when you are dealing with such dire circumstances it can get frustrating when the seemingly random nature of the obtuse point-n-click fighting system makes it feel like there isn’t much you can really do to adequately defend yourself.

This War of Mine is a refreshing take on the depiction of war in video games. In an industry that often unintentionally glamorizes combat by using war as merely an excuse to allow you to shoot things, it is great to see something that is more along the lines of Hotel Rwanda or The Killing Fields. This War of Mine is a compelling drama that delves into the horrors of war and the atrocities that humans are capable of inflicting upon each other, and sometimes it forces you to commit those terrible acts yourself to save your own group. It is not a pleasant experience, but it is still a game well worth playing. It is capable of evoking real emotional responses, and it doesn’t feel the need to resort to ham-fisted “press F to FEEL” tactics of certain other war games that came out this year. You can currently find This War of Mine on Steam and GOG for $20.

Welcome ghouls, beasts, tricksters, and every horrific being known to man. The spooky season is upon us and I figured I would indulge in the festivities in my own way. Thus, I have come up with a satirical take on … END_OF_DOCUMENT_TOKEN_TO_BE_REPLACED

The month of October is here, and the spooky festivities are starting. However, it is still key to be aware of the other important events happening around this time of the year. For example, October is Breast Cancer Awareness month. … END_OF_DOCUMENT_TOKEN_TO_BE_REPLACED

Do so, and you’ll probably find that T END_OF_DOCUMENT_TOKEN_TO_BE_REPLACED

I remember when I played my first Resident Evil. It was a gift and couldn’t wait to get it running in my old PS1. That old Capcom “this game contains scenes of explicit violence and gore” plastered on the … END_OF_DOCUMENT_TOKEN_TO_BE_REPLACED

At the beginning of one mission, you are marked for dead by the organization you work for. Your handler has no idea what happened but informs you that they are coming for … END_OF_DOCUMENT_TOKEN_TO_BE_REPLACED

The history of gaming isn’t that old compared to other artistic and entertainment mediums. Many people have lived through the entirety of video game history, and more people have seen most of it. As such, you’d think that the … END_OF_DOCUMENT_TOKEN_TO_BE_REPLACED

(Updated 4/18/22) Even at a time when it feels like every game is being adapted into a show or movie, the news that Twisted Metal is being turned into a TV series stands out. Why? Well, it probably has … END_OF_DOCUMENT_TOKEN_TO_BE_REPLACED

(Updated 4/15/22) The reveal of the Mortal Kombat movie trailer and news that Street Fighter characters are joining the Fortnite roster has both legendary franchises on the minds of gamers everywhere. So, it’s only natural that fans have also … END_OF_DOCUMENT_TOKEN_TO_BE_REPLACED

Welcome ghouls, beasts, tricksters, and every horrific being known to man. The spooky season is upon us and I figured I would indulge in the festivities in my own way. Thus, I have come up with a satirical take on … END_OF_DOCUMENT_TOKEN_TO_BE_REPLACED

In 2020 it was revealed developer IO Interactive was working on a James Bond game known as Project 007 which, understandably, shook the video game world. Still in production, there’s a possibility that their James Bond game could be the … END_OF_DOCUMENT_TOKEN_TO_BE_REPLACED