Titan Attacks – Ready to Save the Earth from Invaders Once Again?

Initially released in May 2014 by developer and publisher Puppy Games, Titan Attacks was recently ported to the Playstation 3, Playstation 4, and the Vita this month. Puppy Games specializes in what they describe as, “neo-retro arcade games,” and Titan Attacks certainly seems to deliver on that. Offering classic arcade fun with modern twists it is worth the download, especially since it is free this month for PSN members.

From the very beginning, this title exudes a retro flair reminiscent of Atari games of old. Players with classical arcade experience will surely pick up immediately on Titan Attacks’ similarities to titles like Galaga or Space Invaders. They will also notice new offerings in gameplay and beautifully done art alluding to a past generation of games. Simple mechanics are enhanced as well to make it stand out as a classic in its own right.

Regarding gameplay, players take on the role of “the last surviving tank commander on Earth” to fight off aliens invasions from Titan. Through heated battle, players must fight through waves of levels with interim boss battles; a battle that spans from Earth to the final showdown on the alien planet Titan. Titan Attacks does not try to be something it is not and instead focuses players in taking on the role of a nameless tank commander as they defend Earth and stick it to the alien hoards.

The game touts typical upgrade capabilities allowing for additional barrels, higher damaging bullets, and more. Upgrade capabilities seem to scale well with the overall difficulty curve of the game while still keeping certain boss battles challenging. I will, however, always enjoy the feeling of launching a mega-bomb and watching a screen full of enemies burst into flame.

The art style is quite vivid and draws ones attention. Even when players find themselves in dark areas, detail and tone in level art stand out given the use of layered background environments that make each area come to life despite a two dimensional flat appearance. Backgrounds have so much life that I sometimes find myself distracted when attempting to focus on so many moving enemies and bullets in the battleground.

I was certainly able to draw upon my experience with similar titles to power through the game in just a few hours which, for a free game, was not so bad. A true mix of moder and retro design, Titan Attacks, evokes nostalgic feelings of classic games, while offering enough modern design choices to interest gamers with more current tastes.

Released in 2002 just two months before the debut of the beloved Grand Theft Auto: Vice City, it was, perhaps, inevitable that the two games would be compared. … END_OF_DOCUMENT_TOKEN_TO_BE_REPLACED

While the delay of Halo Infinite upset many franchise fans looking to dive into the series latest installment before 2021, the recent addition of Halo 3 ODST to Game Pass gives us a reason to dive a little deeper … END_OF_DOCUMENT_TOKEN_TO_BE_REPLACED

Four years ago, Doom had nothing to lose and everything to gain. The perception of the series after Doom 3’s mediocre release and the franchise’s subsequent hiatus left few people even looking for another game in the series. However, id … END_OF_DOCUMENT_TOKEN_TO_BE_REPLACED

Recently, I finished Rage 2.  I set out in the game with the hope that it would deliver something reminiscent of the magnificence of Doom while drawing some of the enjoyable open-world aspects of an Avalanche developed game.  I … END_OF_DOCUMENT_TOKEN_TO_BE_REPLACED

PlayStation Now sounded like a pretty exciting service when it was first revealed in 2014. At the very least, it offered … END_OF_DOCUMENT_TOKEN_TO_BE_REPLACED 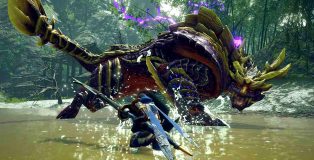 The first quarter of any year is usually pretty bland when it comes to releases, but most of the time things start picking up in March.  Despite 2020’s existence, 2021 seems to be shaping up similarly. These games come … END_OF_DOCUMENT_TOKEN_TO_BE_REPLACED

With the mediocrity of the first Nintendo Direct since 2019, it seems Nintendo is doubling down on the limited effort to make the most of its immensely popular console. The Nintendo Switch has sold nearly 80 million units and, … END_OF_DOCUMENT_TOKEN_TO_BE_REPLACED

Supergiant Games has a history of setting standards in the world of indie development. Despite maintaining a relatively small team for years, they’ve created some of the most impactful titles each including top-tier design, voice, and music. Hades is … END_OF_DOCUMENT_TOKEN_TO_BE_REPLACED

The first quarter of any year is usually pretty bland when it comes to releases, but most of the time things start picking up in March.  Despite 2020’s existence, 2021 seems to be shaping up similarly. These games come … END_OF_DOCUMENT_TOKEN_TO_BE_REPLACED

Today’s announcement that remakes of Pokemon Diamond and Pearl are coming to Nintendo Switch was a big win for Nintendo. Not only do the remakes look to bolster a sometimes struggling Switch library, but they’ll allow Pokemon fans new … END_OF_DOCUMENT_TOKEN_TO_BE_REPLACED

Even at a time when it feels like every game is being adapted into a show or movie, the news that Twisted Metal is being turned into a TV series stands out. Why? Well, it probably has something to … END_OF_DOCUMENT_TOKEN_TO_BE_REPLACED