‘Warlocks vs. Shadows’ Review: A Side-Scrolling Co-op Beat ‘em Up

Warlocks vs. Shadows is a side-scrolling, co-op beat ‘em up developed by Frozen District. You hack, slash, and spellcast your way through 5 worlds, fighting wave after wave of enemies and frightening bosses.

The game allows you to play as a number of different Warlocks, each with their own distinct abilities. Warlocks vs. Shadows is a marriage between old-school brawlers like Golden Axe, and more modern action RPGs like Diablo. You have four skills to utilize, and they work in very different ways depending on which warlock you’re controlling.

I started the game as the Barbarian, who has the most standard skillset for a hack ‘n’ slash game. He was interesting, but a little too vanilla for my taste, so I decided to give the other classes a spin before moving further into Warlocks vs. Shadows. 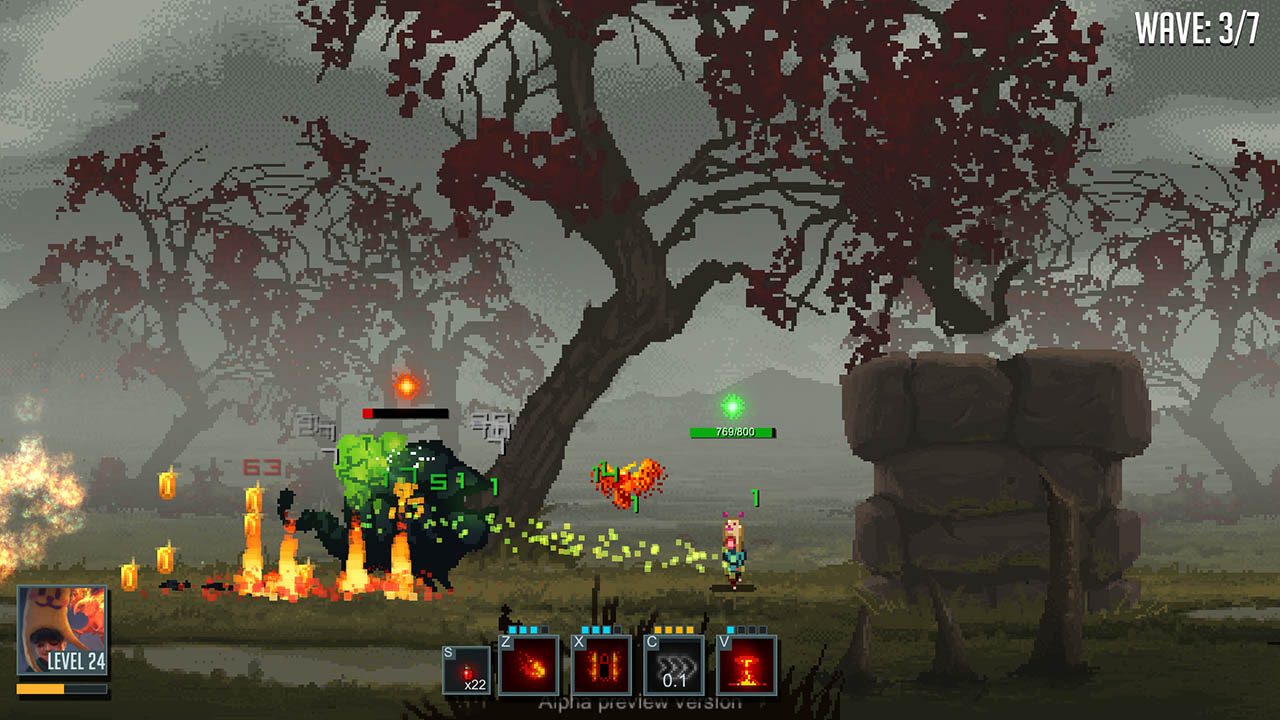 I was really surprised by the level of diversity in the classes you start out with. The Shaman can heal the party in one form, or switch forms to handle more like a poisonous rogue. My favorite, Anya, an ice magician, shoots ice bolts at enemies which causes them to freeze more and more each time you land a hit, allowing you to shatter the ice with another skill. 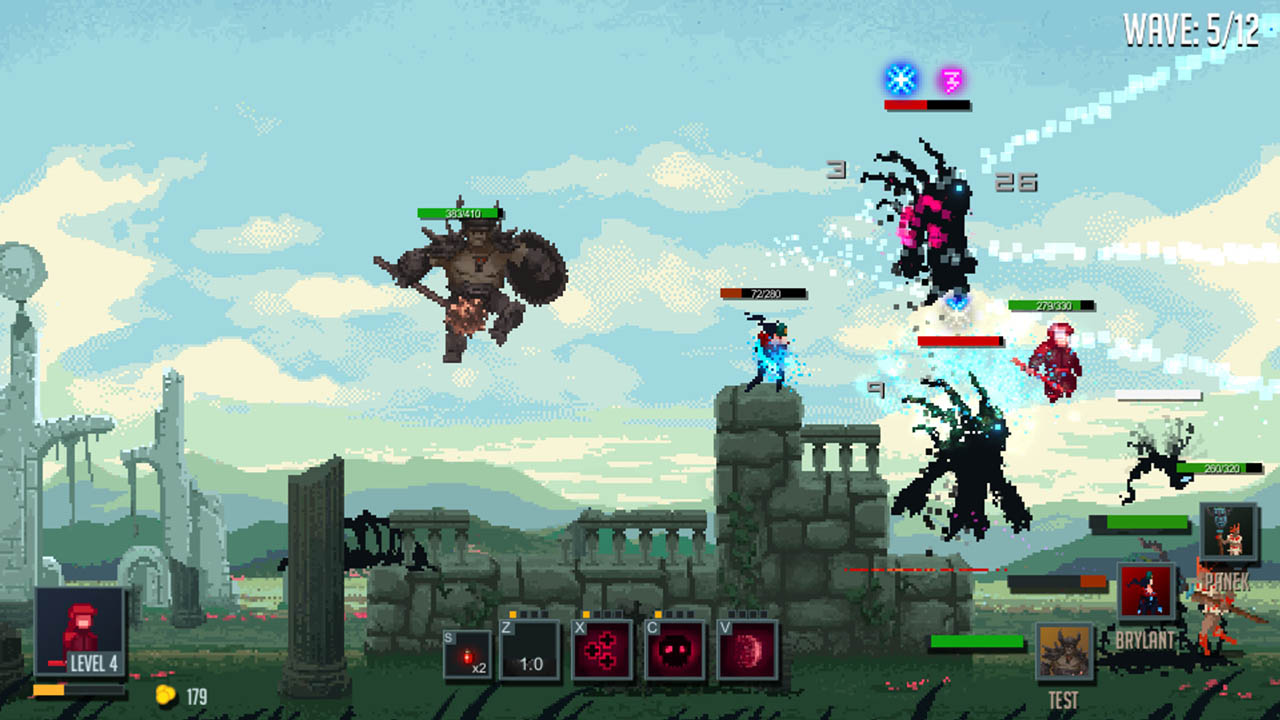 While the character designs are incredible for this type of game, the level designs leave a bit to the imagination. You bounce from arena to arena, which mostly have straightforward designs with enemy spawn points that don’t really change. You fight through a set number of these arenas to get to the boss, and then you kill him. It’s barebones, and it works, but it’s not exactly groundbreaking.

Luckily, the moment-to-moment combat is satisfying enough for this to not be much of an issue. Getting swarmed by enemies feels frenetic, and manipulating your skills in the most efficient way is a fun challenge. I imagine the fun factor ramps up even more with a few friends. 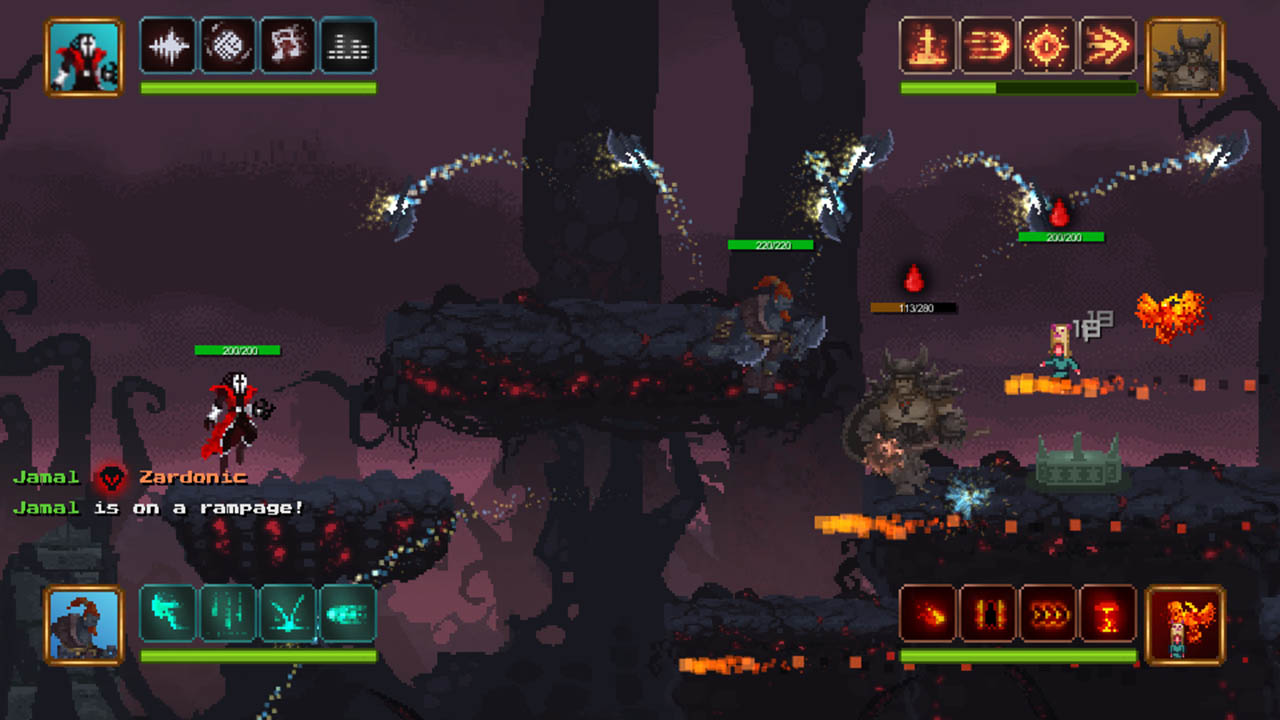 One of my favorite parts of the game was the use of old school sound effects. A Mortal Kombat style narrator announces your character decision, and each character makes the familiar call outs of attack and pain, but they all fit uniquely to the character you’re playing. One in particular, the Bass Wizard, has hilarious dubstep inspired sound effects for all of his spells.

Unfortunately, the music is very repetitive, with the same couple of songs looping endlessly as you blast through levels.

At the end of the day, if you have a couple of friends (or ambitions to play alone) Warlocks vs. Shadows provides a solid hack and slash experience. It’s got a barebones but interesting story, an enjoyable visual style, and enough characters and charm to give you a reason to keep dipping into the game’s three or four hour long campaign. With versus and horde modes also available, you have options in terms of the kind of mayhem you’re looking for.

It’s not going to win any game of the year awards, but if you’re looking for a lazy afternoon hacking your way through the dungeons, Warlocks vs. Shadows is a great pick.

Do so, and you’ll probably find that T END_OF_DOCUMENT_TOKEN_TO_BE_REPLACED

I remember when I played my first Resident Evil. It was a gift and couldn’t wait to get it running in my old PS1. That old Capcom “this game contains scenes of explicit violence and gore” plastered on the … END_OF_DOCUMENT_TOKEN_TO_BE_REPLACED

At the beginning of one mission, you are marked for dead by the organization you work for. Your handler has no idea what happened but informs you that they are coming for … END_OF_DOCUMENT_TOKEN_TO_BE_REPLACED

The history of gaming isn’t that old compared to other artistic and entertainment mediums. Many people have lived through the entirety of video game history, and more people have seen most of it. As such, you’d think that the … END_OF_DOCUMENT_TOKEN_TO_BE_REPLACED

(Updated 4/18/22) Even at a time when it feels like every game is being adapted into a show or movie, the news that Twisted Metal is being turned into a TV series stands out. Why? Well, it probably has … END_OF_DOCUMENT_TOKEN_TO_BE_REPLACED

(Updated 4/15/22) The reveal of the Mortal Kombat movie trailer and news that Street Fighter characters are joining the Fortnite roster has both legendary franchises on the minds of gamers everywhere. So, it’s only natural that fans have also … END_OF_DOCUMENT_TOKEN_TO_BE_REPLACED

In 2020 it was revealed developer IO Interactive was working on a James Bond game known as Project 007 which, understandably, shook the video game world. Still in production, there’s a possibility that their James Bond game could be the … END_OF_DOCUMENT_TOKEN_TO_BE_REPLACED

The history of gaming isn’t that old compared to other artistic and entertainment mediums. Many people have lived through the entirety of video game history, and more people have seen most of it. As such, you’d think that the … END_OF_DOCUMENT_TOKEN_TO_BE_REPLACED

30+ years on, there’s somehow nothing quite like an NES action game. From the soundtracks to the level design and airtight mechanics, classic NES games like Ninja Gaiden and Mega Man remain some of the absolute best the medium … END_OF_DOCUMENT_TOKEN_TO_BE_REPLACED