When it comes to tabletop miniatures games, many people usually think of Warhammer 40,000. Even gamers unfamiliar with the hobby have probably heard about it through some of the critically acclaimed video games the IP has spawned. While perhaps lesser known by people outside of the hobby, Warmachine (and its companion game Hordes) by Privateer Press is up there as one of the few miniature games that really competes with Games Workshop’s products in terms of player numbers. As the game continues to grow, it was only a matter of time before we finally saw Warmachine adapted into a video game. What started as a hack-n-slash spectacle fighter, Whitemoon Dreams’ crack at a Warmachine video game eventually turned into a more traditional turn-based strategy title loosely based on the physical game. Just over $1.5 million in Kickstarter bucks and a year later, Warmachine: Tactics is finally officially released, but unfortunately the result is a bit of a train wreck. 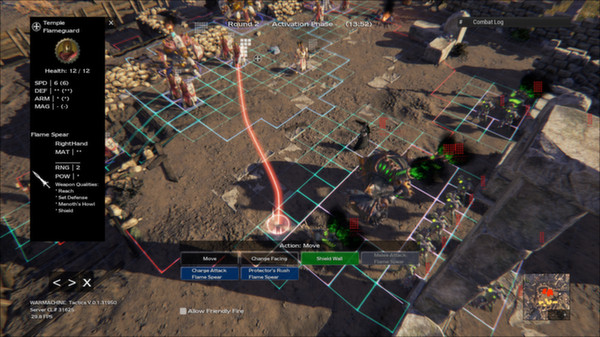 For the uninitiated, Warmachine is a steampunk miniatures game set in a post-Industrial Revolution fantasy world where guns, trains, and mechanical prosthetic limbs are just as common as swords, magic, and monsters. The most iconic of the steampunk technologies on display is the warjack, large steam-powered robots commanded by powerful magic-wielding generals called warcasters. Warmachine: Tactics features the four core factions of the game, with Mercenaries coming later this month, and a 21 mission campaign that has you follow a journeyman warcaster from Cygnar named Lt. Allison Jakes as she progresses from an inexperienced newbie to a full-fledged warcaster.

A lot of the core mechanics of the tabletop game are here in Tactics. You control small bands of soldiers and warjacks under the command of a single warcaster. Your warcaster serves as your commander and the source of the precious Focus that pushes your warjacks to peak efficiency. Essentially your mana pool, Focus can be used to cast and upkeep spells, enhance attacks, or be allocated to warjacks to amplify their own abilities and/or make special attacks.

Now, if you’ll allow me to indulge in my inner grognard, I have to say that I don’t like how many of the tabletop mechanics transitioned to Tactics. The basic stuff is much like you’d find it in the physical game, but a lot of the deeper mechanics have been simplified or just taken out altogether.

The concept of units is completely gone. Everything is basically a solo in Tactics and operates by itself. This drastic change also came with a total revamp of the stats that Warmachine players are used to, making infantry more survivable than they are on the tabletop to rather absurd degrees. Warjacks no longer have systems, so you can’t just cripple a jack and ignore it anymore. Other changes include the complete absence of AoE drifting, so no lobbing Vanquisher shots at stuff beyond maximum range and hoping for lucky deviations. In Tactics, if it is out of range then you just don’t even have the option to target it. The move from the freeform movement of the tabletop to a grid also feels odd, and you can’t pull a lot of the positioning shenanigans in Tactics that you can in the real game. There is a hard cap on the number of units you can have in your army in skirmish and multiplayer, a mere 16, so Cryx players will be very upset to see that their Moar Banez philosophy doesn’t apply here. Then again, Tactics doesn’t even have banes in the game to begin with. 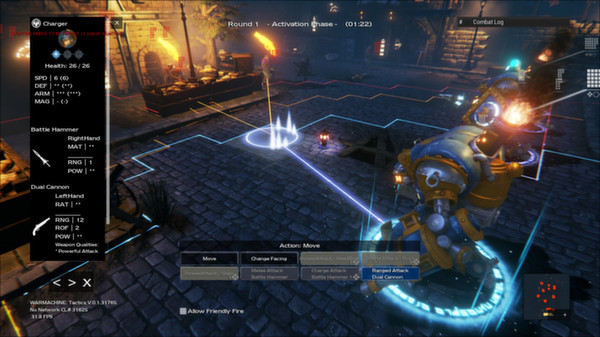 I could go on, but you probably get the idea. I personally think that many of the adjustments made when translating the tabletop game to PC have significantly watered it down and restricted your options, and things just don’t seem to flow as well as I’d like, though that could probably be attributed to the awful UI. A lot of those little tips and tricks you pick up after playing the tabletop game for years just don’t work in Tactics. But, my own personal opinion aside, this is the least of Tactics‘ problems.

The AI is nothing short of atrocious, both in the campaign and skirmishes. I’ve seen the AI choose to run stuff when they could have charged, send squishy support units like Stormcallers into melee with heavy warjacks, or simply just choose not to attack stuff they are engaged with. Many of the campaign missions also seem designed with this in mind, creating difficulty through sheer numbers and cheap ambushes, reinforcements, and other irritating scripted events that can’t be avoided or planned for the first time around.

You can’t save in the campaign either. If you fail then you just have to start over again, which gets extremely frustrating and tedious when it comes to levels where you must deal with equally stupid friendly AI units, lengthy missions, or the game’s frequent bugs and crashes. Speaking of which, crashes and scripting bugs are commonplace, and they get progressively worse the further you get in the campaign. Missions 14 and 19 in particular seem to be especially buggy, with plenty of complaints on the forums from people unable to progress in these missions. 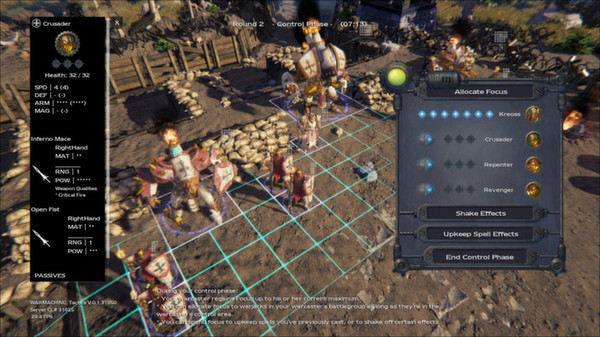 Adding to the technical issues is abysmal performance on pretty much any system. Neither of my computers could keep the game at a consistent 30 FPS no matter what I did with the settings, and most of the time it was way below that. There was one mission where the game just refused to go above 13 FPS. Getting the game to a comfortable 60+ FPS seems to be a pipe dream for most players. This is hardly an isolated issue either, and people have been complaining about the game’s completely unacceptable framerate since Early Access. Mac users should be especially cautious from what I’ve read. Texture pop-in is another big issue. It’s a shame, because theoretically Tactics would be a pretty good-looking game if you could actually run it on high while maintaining a playable framerate.

Wrapping up the technical issues is a clunky UI and camera that refuses to cooperate. Facing units the way you want them is fiddly at best, a massive flaw in a game that places so much emphasis on proper positioning, while even just trying to plot your movement can be problematic at times. The camera never seems to give you the best view of the battlefield. Whenever units move and attack they’ll sometimes enter a “cinematic” view of the action like in XCOM…At least in theory. In practice, get ready to see the insides of a lot of buildings and hills as the camera flips out. Oh, and sometimes it screws up the camera once the animations end, forcing you to reset the whole thing all over again just as you finally found a decent angle. 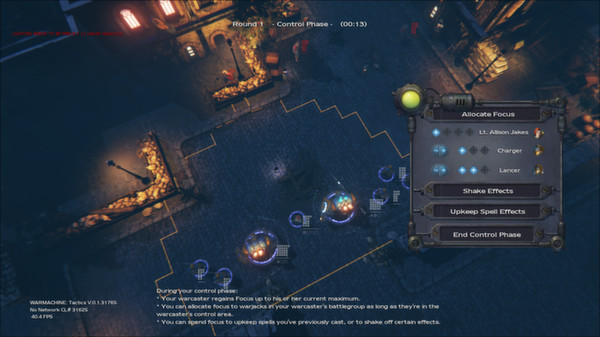 In another grognard moment, I also want to bring up how I find certain exclusions from Tactics particularly odd. Warmachine has over a decade of expansions and add-ons, so I don’t expect Whitemoon Dreams to include every unit and faction right at release, but many of the things that are missing are just baffling from the perspective of a long-time Warmachine player. How did Strakhov make it into the game before Vlad “Shoulder Pads” Tzepesci? How can you include the Protectorate without the Choir? Why is the generally maligned Iron Lich Overseer in the game when Bane Thralls and/or Knights aren’t? Warmachine thrives on its competitive tournament scene, so where are the Steamroller-style objectives and scenarios for skirmish and multiplayer? This is based on a miniatures game, so why isn’t there any sort of army painter tool?

Warmachine: Tactics just isn’t ready yet. It’s riddled with way too many issues to allow me to recommend it to anyone, Warmachine fan or not. The game never should have left Early Access in such an obviously unfinished state. As much as I may have complained about differences between the tabletop game and Tactics, I could have eventually looked past those issues if the rest of the game wasn’t so cripplingly broken. I can’t even finish the campaign because I keep getting crashes and errors, and a quick glance at the forums shows that this isn’t happening in a vacuum. At $40, right now, Warmachine: Tactics isn’t worth getting. Perhaps I’ll come back in a few months to see if it has improved any. If you must get it anyway, you can find Warmachine: Tactics on Steam.

Snowfall is here and it is time to cheer! Sorry about that… As different video games pump out their holiday events, plenty get swept under the radar. If you are tired from playing the multiple FPS holiday events … END_OF_DOCUMENT_TOKEN_TO_BE_REPLACED

Amazon Prime members can get free games and free in-game content every month that last a certain amount of time. You can jump over to Amazon to sign-up for an account or navigate to the Prime Gaming section to see … END_OF_DOCUMENT_TOKEN_TO_BE_REPLACED

Do so, and you’ll probably find that T END_OF_DOCUMENT_TOKEN_TO_BE_REPLACED

I remember when I played my first Resident Evil. It was a gift and couldn’t wait to get it running in my old PS1. That old Capcom “this game contains scenes of explicit violence and gore” plastered on the … END_OF_DOCUMENT_TOKEN_TO_BE_REPLACED

At the beginning of one mission, you are marked for dead by the organization you work for. Your handler has no idea what happened but informs you that they are coming for … END_OF_DOCUMENT_TOKEN_TO_BE_REPLACED

The history of gaming isn’t that old compared to other artistic and entertainment mediums. Many people have lived through the entirety of video game history, and more people have seen most of it. As such, you’d think that the … END_OF_DOCUMENT_TOKEN_TO_BE_REPLACED

(Updated 4/18/22) Even at a time when it feels like every game is being adapted into a show or movie, the news that Twisted Metal is being turned into a TV series stands out. Why? Well, it probably has … END_OF_DOCUMENT_TOKEN_TO_BE_REPLACED

(Updated 4/15/22) The reveal of the Mortal Kombat movie trailer and news that Street Fighter characters are joining the Fortnite roster has both legendary franchises on the minds of gamers everywhere. So, it’s only natural that fans have also … END_OF_DOCUMENT_TOKEN_TO_BE_REPLACED

Snowfall is here and it is time to cheer! Sorry about that… As different video games pump out their holiday events, plenty get swept under the radar. If you are tired from playing the multiple FPS holiday events … END_OF_DOCUMENT_TOKEN_TO_BE_REPLACED

Welcome ghouls, beasts, tricksters, and every horrific being known to man. The spooky season is upon us and I figured I would indulge in the festivities in my own way. Thus, I have come up with a satirical take on … END_OF_DOCUMENT_TOKEN_TO_BE_REPLACED