Wizards: 1984 VR – A Retro Indie Game made for Google Cardboard

The screenshot above is from Wizards: 1984 – a game from studio Terrasect Mobile founded at The University of Advancing Technology in 2014. The company, created by John Wisniewski and Jeff Rosenberg, has produced several mobile games that fit into different genres. Wizards is a Retro FPS, made for Google Cardboard, that’s available for .99 from Google Play.

To start, there are multiple elements of this Android title that offer a truly fun experience. The first is the retro gaming nostalgia that comes from jumping into a game that offers a throwback to the vector-based graphical days of Atari and Commodore. Played on newer technology like smartphones might encourage others to put a higher look to the graphics, but this game stays true to the classic feel of the early days through wireframe graphics and an 8-bit pastel color palette.

The second element builds on the first by adding gameplay that fits well within the retro framework. The game puts players in control of “the last remaining Techno-Wizard” as they fight the “evil Techno-Viking horde” in a space tower to prevent loot from disappearing from the tower.

This straight-forward premise for the game narrative leads to innovative gameplay on top of a rather simple plotline. This is done through a gameplay mechanic that has players control the tower on a swivel with left and right rotations of the phone to control the camera and look for targets. Once targets are found simply vanquish the horde by pressing the right side of the tower to fire a slew of bullets or the left side of the tower to fire missiles, being careful to not overheat the weapons.

Also, players need to avoid destruction by keeping a careful eye on the shield meter. For a rather desolate landscape grid with only simple trees on it and enemies, it’s not too difficult to spot them and fire on them from afar to survive. There is even the option to make use of Google Cardboard for an immersive experience that’s reminiscent of old school VR games.

I simply loved the game and recommend it to any who want retro gaming with innovative gameplay, just make sure you are in a safe place when you start spinning around and taking out the evil horde lest you run into something.

Released in 2002 just two months before the debut of the beloved Grand Theft Auto: Vice City, it was, perhaps, inevitable that the two games would be compared. … END_OF_DOCUMENT_TOKEN_TO_BE_REPLACED

While the delay of Halo Infinite upset many franchise fans looking to dive into the series latest installment before 2021, the recent addition of Halo 3 ODST to Game Pass gives us a reason to dive a little deeper … END_OF_DOCUMENT_TOKEN_TO_BE_REPLACED

Four years ago, Doom had nothing to lose and everything to gain. The perception of the series after Doom 3’s mediocre release and the franchise’s subsequent hiatus left few people even looking for another game in the series. However, id … END_OF_DOCUMENT_TOKEN_TO_BE_REPLACED

Recently, I finished Rage 2.  I set out in the game with the hope that it would deliver something reminiscent of the magnificence of Doom while drawing some of the enjoyable open-world aspects of an Avalanche developed game.  I … END_OF_DOCUMENT_TOKEN_TO_BE_REPLACED

PlayStation Now sounded like a pretty exciting service when it was first revealed in 2014. At the very least, it offered … END_OF_DOCUMENT_TOKEN_TO_BE_REPLACED

With the announcement of Lucasfilm Games being created as well as Ubisoft taking on the role of creating an open-world Star Wars game, the future of the franchise seems bright. While EA has certainly turned things around with the … END_OF_DOCUMENT_TOKEN_TO_BE_REPLACED

Star Citizen has had an interesting year. Like many developers, the circumstances of 2020 left development hampered with most working remotely. However, Cloud Imperium Games had the advantage of having much of the infrastructure in place for this – … END_OF_DOCUMENT_TOKEN_TO_BE_REPLACED

There are times when a video game releases and the world stops… just for a second. Most of the time people wouldn’t even notice it in the heat of the moment. They wouldn’t feel the effects of that game’s … END_OF_DOCUMENT_TOKEN_TO_BE_REPLACED

While we’re just days away from an extended look at Resident Evil 8 and months away from the release of the game itself, we actually don’t know that much about the sequel. Most of what we do know (or … END_OF_DOCUMENT_TOKEN_TO_BE_REPLACED

With the announcement of Lucasfilm Games being created as well as Ubisoft taking on the role of creating an open-world Star Wars game, the future of the franchise seems bright. While EA has certainly turned things around with the … END_OF_DOCUMENT_TOKEN_TO_BE_REPLACED 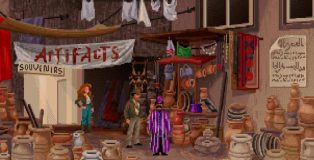 The recent announcement that Bethesda and Wolfenstein developer MachineGames will team up to make a modern Indiana Jones title was entirely unexpected but welcome in ways that feel hard to describe.

However, questions remain regarding the upcoming Indiana Jones … END_OF_DOCUMENT_TOKEN_TO_BE_REPLACED