Way back in the 2008-2009 timeframe, the only sign fans had of a new title in the X-COM franchise was a troubled squad-based cover-shooter set in the 1960s that was almost universally reviled by X-COM purists. Goldhawk Interactive, a tiny indie studio in the UK, was formed by hardcore X-COM fans with one goal: The creation of a new spiritual successor to the original. Since then, 2K and Firaxis brought us the pretty solid XCOM: Enemy Unknown and the even more improved Enemy Within expansion…Oh, and that shooter finally came out as The Bureau: XCOM Declassified after years of delays and development woes. So, now that we have a true, turn-based strategy reboot of X-COM, how does Xenonauts stack up? Spoiler: X-COM purists now have the X-COM reboot they’ve been waiting for.

The year is 1979 and Earth is being invaded by aliens. An international counter-alien task force called the Xenonauts are humanity’s best chance of survival. As the commander of the Xenonauts, it is your job to monitor extraterrestrial activity, intercept UFOs, study the enemy’s exotic weaponry and technology, and send your ground forces to dispatch any aliens that set foot on Earth while defending the local population. 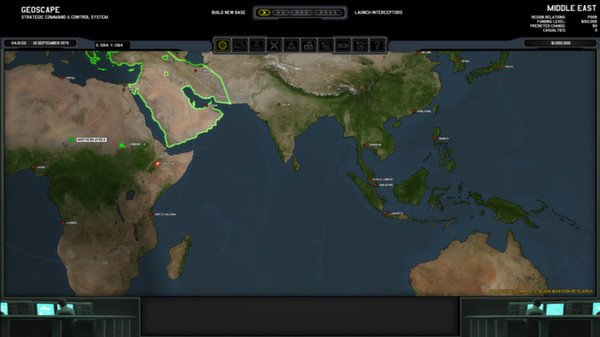 Xenonauts will be immediately familiar to anyone who has experience with the original X-COM of the 1990s. The first thing you’ll see is a world map called the Geoscape, and you’ll be asked to place your first base. It’s from here that you’ll track alien activity, deploy fighters to intercept any UFOs detected by your radar arrays, manage your ground troops and their equipment, research captured alien technology, construct new weapons and equipment, and much more.

Much like in the original, a single base won’t cut it forever. Before long you’ll need to build more to intercept alien activity happening outside of your first base’s sphere of influence. The planet is divided into regions, each of which provides you with funding at the end of every month based on your performance within that region. If you allow too much alien activity to go unchecked in a region, they’ll eventually cut funding and leave the project. Once you lose funding from five regions, the Xenonauts will be disbanded and the aliens win. 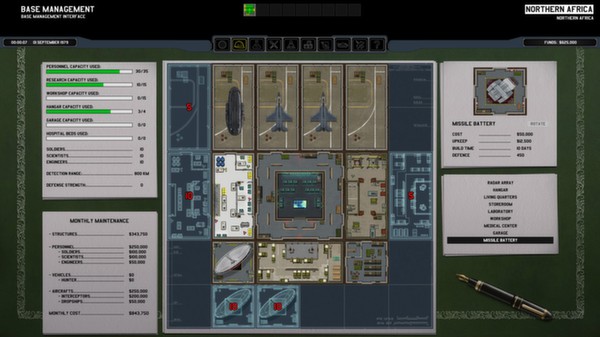 The first few months are always stressful because you simply won’t have the radar coverage and interceptors to respond to every report of alien activity. You’ll receive reports of abductions or UFOs shooting down airliners or blowing up malls from areas that you can’t reach yet. All you can do is watch as the casualties rise and your funding from that region decreases. Even once you have multiple bases, you’ll often encounter more UFOs than you can actually deal with. Interceptors are expensive to maintain, take up a lot of space in your base, and must return to rearm and refuel once they splash a bandit, a process that can take several in-game hours. You’ll need to pick and choose which ones you decide to intercept and hope the others don’t cause too much damage.

Probably the biggest new addition to Xenonauts over X-COM is the air combat. Once your interceptors get into range, you’ll have the option to control your fighters from an radar-like screen. You can freely control your fighters by moving them around like in an RTS, and can issue basic orders like telling them when to perform a dodge roll and when to fire their weapons. You can always choose to autoresolve, but playing out the battle yourself could result in avoiding unnecessary losses or even winning seemingly impossible engagements.

Once a UFO is shot down, you’ll have a chance to send in your ground forces to clear the area of surviving aliens and gather any recoverable extraterrestrial artifacts that your scientists and engineers require to research and develop new technology. These basic missions typically consist of just killing all surviving aliens or finding and holding the crashed UFO for five turns, thereby eliminating the need to hunt down every single enemy on the map. Other mission types include Terror Missions where you must evacuate civilians before the attacking aliens find them, raids on alien bases, and even defending your own bases against assaults.

The ground combat is very similar to the original X-COM, with various balance fixes and the benefits that modern technology can provide like fully destructible environments. The default transport aircraft can carry a maximum of eight soldiers, or only six if you decide to bring along a vehicle. Your soldiers use action points called Time Units to move, shoot, open doors, use items, crouch, etc. Unused TUs can be spent to return fire at enemies during the alien’s turn, and a new TU Slider on the UI allows you to reserve TUs automatically for reactionary fire without trying to calculate it all in your head.

Xenonauts perfectly recaptures the sheer terror of the original X-COM. Your troops start off with very basic 1970s technology, like early model M16s and nonexistent body armor. Even once you have better body armor and advanced weaponry like lasers or plasma-resistant assault shields, every time you click that End Turn button you’ll find yourself on the edge of your seat, hoping you don’t see plasma bolts streak across the screen from outside of your view range and vaporize one of your veterans. Losing a veteran hurts just as much as it always has in the X-COM series. Rookies always have pretty poor stats, and it takes a while to turn a green recruit into a hardened alien killer. The same applies every time you inch your troops forward and find a new alien species with unknown combat capabilities.

For the most part, the combat is nicely streamlined and more balanced compared to the original X-COM. Vehicles are more useful than before, with even the basic Hunter armored car able to decimate aliens early on in the campaign. The TU system has been redone and scales better as your soldiers gain experience, ensuring that even well-equipped veterans are vulnerable later on. The one area where the game’s otherwise pretty solid balance falters is when it comes to alien psy attacks. Smart tactics and a well-equipped squad can overcome just about everything the aliens can throw at you…except psychic attacks. They have no range limit and don’t require line of sight, so it is entirely possible to have a soldier go berserk and open fire at his buddies with a machine gun and kill half your squad. The game currently does not have anything you can research or build to help your soldiers deal with psychic attacks. All you can do is hope your soldiers can resist it or resort to rather nonsensical exploits like intentionally handicapping your soldiers with low Bravery stats or have someone with nonlethal weapons dedicated to knocking out soldiers that do go crazy. 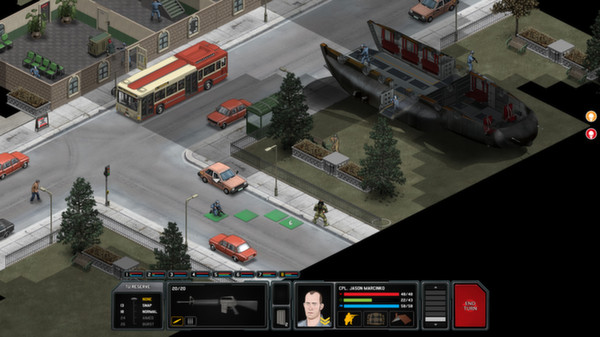 The game also has a few issues with line of sight and cover, something that always happens with isometric games like this. Sometimes it can be hard to tell if a soldier is actually behind a solid piece of cover, and it is always frustrating when your sniper’s shot hits the piece of debris he is crouched behind even though the targeting lines say you have a clean shot. Changing between elevations can be a little iffy too, especially when targeting enemies above or below you. I’ve also had the game crash to desktop a handful of times, and occasionally I’ll encounter a glitch where the terrain doesn’t become translucent when I have a soldier behind it, making it difficult to tell where he or she is.

Finally, the game really could use a proper tutorial. This game was very much made by X-COM fans, for X-COM fans, and will probably prove to be quite overwhelming to anyone who hasn’t played the series before. Even X-COM veterans might find some of the mechanics a bit confusing, because in some ways Xenonauts is even more complex than X-COM, with its expanded air combat and greater strategic depth in the Geoscape map. There is a manual and a “quickstart” guide that helps walk you through the first few months of a campaign, but these aren’t the best substitutes for a proper tutorial. By aiming the game so heavily at X-COM purists I’m afraid that Goldhawk might drive away some new fans who would like the game if it was better explained to them.

With all that said, my complaints with Xenonauts are generally pretty mild. Even as someone who really enjoyed the Firaxis XCOM, Xenonauts manages to scratch some itches that you just can’t get from the reboot. It does a great job of remaking the original X-COM with modern technology, a streamlined UI, and new features that add even more depth to the experience. Xenonauts sets a new standard for how a spiritual successor/reboot of a beloved cult classic should be brought into modern times.

There’s a Pokémon trading card frenzy happening right now that seems to have stemmed from folks being stuck at home for so long. Now, Target is pulling all Pokémon trading cards, as well as sports cards and presumably any entertainment … END_OF_DOCUMENT_TOKEN_TO_BE_REPLACED

That doesn’t mean the game … END_OF_DOCUMENT_TOKEN_TO_BE_REPLACED

Developed by studio RocketWerkz and the creator of DayZ, Dean Hall, Icarus … END_OF_DOCUMENT_TOKEN_TO_BE_REPLACED

Four years ago, Doom had nothing to lose and everything to gain. The perception of the series after Doom 3’s mediocre release and the franchise’s subsequent hiatus left few people even looking for another game in the series. However, id … END_OF_DOCUMENT_TOKEN_TO_BE_REPLACED

Recently, I finished Rage 2.  I set out in the game with the hope that it would deliver something reminiscent of the magnificence of Doom while drawing some of the enjoyable open-world aspects of an Avalanche developed game.  I … END_OF_DOCUMENT_TOKEN_TO_BE_REPLACED

PlayStation Now sounded like a pretty exciting service when it was first revealed in 2014. At the very least, it offered … END_OF_DOCUMENT_TOKEN_TO_BE_REPLACED

The Legend of Zelda: Breath of the Wild’s critical acclaim is often met with the counter of being “overrated” by some players. There are usually numerous reasons for this – both notable and ridiculous – but one of the … END_OF_DOCUMENT_TOKEN_TO_BE_REPLACED

I don’t play a lot of Apex Legends anymore. I enjoyed the game for a while, but there aren’t many games I’ve stayed with consistently over the long haul since the lost years of World of Warcraft. These days there … END_OF_DOCUMENT_TOKEN_TO_BE_REPLACED

Diehard fans of Call of Duty’s groundbreakingly successful battle royale – Warzone – have been eagerly anticipating the release of a new map for months now. … END_OF_DOCUMENT_TOKEN_TO_BE_REPLACED

The Legend of Zelda: Breath of the Wild’s critical acclaim is often met with the counter of being “overrated” by some players. There are usually numerous reasons for this – both notable and ridiculous – but one of the … END_OF_DOCUMENT_TOKEN_TO_BE_REPLACED

I don’t play a lot of Apex Legends anymore. I enjoyed the game for a while, but there aren’t many games I’ve stayed with consistently over the long haul since the lost years of World of Warcraft. These days there … END_OF_DOCUMENT_TOKEN_TO_BE_REPLACED

That doesn’t mean the game … END_OF_DOCUMENT_TOKEN_TO_BE_REPLACED