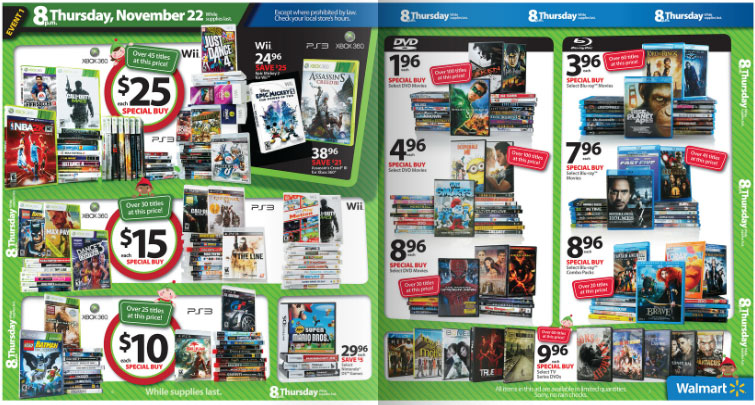 It’s that time of year again! Walmart has revealed a digital flyer for this year’s Black Friday deals. Among a long list of blowouts will be a 4GB Xbox 360 bundle with Skylanders: Spyro’s Adventure for just $149. If you’re looking to pick up a PlayStation 3, they’ll have the 250GB bundle with Uncharted Dual Pack and Infamous Collection for just $199. Wireless controllers for either system will be $39.96 each, Xbox 360 Modern Warfare 3 Wireless Headsets (List: $69.99) will sell for $25. And, Walmart has also listed a slew of video games sale-priced at $10, $15, and $25. END_OF_DOCUMENT_TOKEN_TO_BE_REPLACED

Do so, and you’ll probably find that T END_OF_DOCUMENT_TOKEN_TO_BE_REPLACED

I remember when I played my first Resident Evil. It was a gift and couldn’t wait to get it running in my old PS1. That old Capcom “this game contains scenes of explicit violence and gore” plastered on the … END_OF_DOCUMENT_TOKEN_TO_BE_REPLACED

At the beginning of one mission, you are marked for dead by the organization you work for. Your handler has no idea what happened but informs you that they are coming for … END_OF_DOCUMENT_TOKEN_TO_BE_REPLACED