A look at Hitman: Absolution 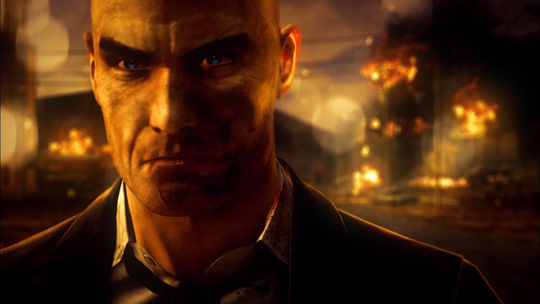 SPOILER ALERT as far as the first mission (tutorial)

Agent 47 is back in this fifth installment of the Hitman series. Absolution takes place shortly after Hitman: Blood Money when 47’s handler Diana Burnwood sabotages the International Contract Agency’s (ICA) database and cuts their funding while she disappears in the confusion. Sometime later after theICAhas been reestablished, Benjamin Travis (47’s new handler) tracks down Diana’s location and gives 47 the contract to kill her for treason. In addition, 47 is tasked to retrieve a girl that Diana kidnapped from the agency.

Diana is holed up in her mansion inChicago, and that’s where the game starts. The tutorial level is the mission to kill Diana and also a way to show off the new and exciting game mechanics introduced in Absolution. One of the most useful abilities is Instinct. By holding down the instinct button you have a greater understanding of the world around you. Enemies will be highlighted and you will be able to see them through walls. Other useful items that you can use in the world are also highlighted using instinct such as sleeping pills or traps you can spring. Another introduction is called Point Shooting. Similar to Splinter Cell’s “Mark and Execute” or Red Dead Redemption’s “Dead Eye”, point shooting allows you to freeze the game and mark you enemies to be killed in quick succession. This ability uses up you instinct meter for the length of time you are marking your targets, as well as for each target marked this way. 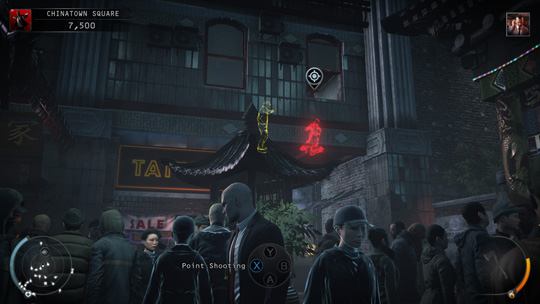 Killing Diana is not a choice you can make. A cut scene takes over and shows you mortally wounding Diana and comforting her in her last moments. She begs you to protect the girl from the agency and give her the choice that 47 never had, as she too is a born and bred assassin. Reluctantly, 47 agrees to protect the girl, forcing him to run from theICAthat will be hunting him to get the girl back. That’s where the game really takes off. There are no more contract hits that you need to make (for theICA), but targets that need to be eliminated to achieve your goals. Basically the game no longer feels like a list of people you need to kill but instead a story that follows Mr. 47. Levels are broken down into smaller sections with each having a specified goal such as dodging police or killing specific targets. Although you no longer get the benefit of bringing along customized weapons (except in contracts mode- more on that later) there are a bunch of different ways to kill your targets with the tools and environmental hazards that each level provides. 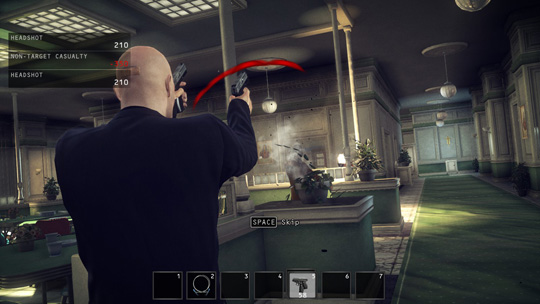 Point Shooting allows you to take out multiple targets with deadly precision.

A scoring system has also been included that tracks your progress throughout the levels. If you were to say knock out a non-target NPC in the level so you could use their clothes as a disguise, you are docked points. However if you hide the body, those points are balanced back out to be even. You also gain points by completing objectives and killing your targets. You earn the most points through signature kills such as using your fiber wire or creating an accident that kills your target. I’m not a huge fan of games scoring me based on how the designers wanted me to play, but it does bring out a bit more of 47’s personality and methodology making the character feel less one-dimensional. I’m also glad that Contracts mode lets you kill targets in your own way that does grant you points based on your own style, so I guess it’s a give and take. There are also challenges for each level that add to its replay value. Some of these challenges go against one another such as “Suit Only” or “Chameleon” (using all disguises) but they do provoke new ways for you to play the game. 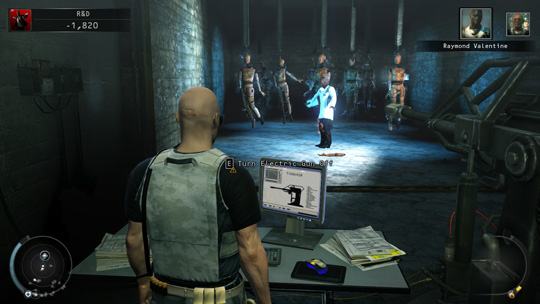 A shocking end for this target.

Contracts mode is a new form of multiplayer challenges created by the community. You pick a level you want to create a contract challenge with, choose a weapon to bring into that level as well as a disguise. The level plays out very similar to the single player campaign with all NPC’s on their own paths only this time you get to choose your targets. Once you’ve found an interesting person you want to kill, you mark them and then kill them. The game will track which weapon you used, if it was a silent kill, and if you hid the body afterwards. All you have to do is simply choose an exit and leave the area to end the mission. You can also mark up to three targets for each mission. The fact that they make you complete the contract yourself means that it can be completed to begin with. However other players could also find a more efficient way to kill those same targets with the same weapons. It’s also nice to see that the developers are cracking down on cheaters that artificially boost their score for more points. Those cheaters’ scores are then reduced to 0 to keep the leaderboards fair. 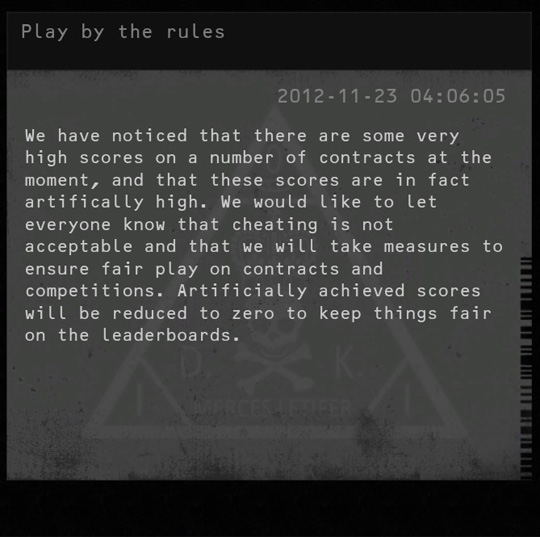 What? A leaderboard with REAL scores!?! Yes!

Absolution is one of the more prominent games that give 47 a personality. For the longest time 47 was a blank slate that just does what he is told with no real personality. Sure he helps out some of the other NPC’s in the world, but nothing really stands out that makes up his character. Absolution delivers on giving players some more insight into what makes up the world’s greatest assassin through a more robust storytelling. Sure he’s still a hitman, but now he’s playing by his own rules. 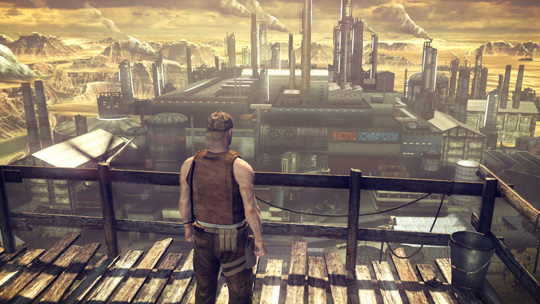 Levels are much bigger than we've seen in previous titles.

Overall Hitman: Absolution plays a bit differently than all the previous games. It provides you more ways to interact with the world around you as well as work with your play style. If you originally planned on making a silent hit but something goes wrong, you can always rely on your skills to quickly take out targets and regain control of the situation. It’s a balanced mix of both stealth and action that makes the game fun and replayable. Contracts mode is also a welcome addition that adds new challenges for players as they compete for the highest score. Absolution is one of the better Hitman games out there and still a strong contender in the Stealth Action genre.

Snowfall is here and it is time to cheer! Sorry about that… As different video games pump out their holiday events, plenty get swept under the radar. If you are tired from playing the multiple FPS holiday events … END_OF_DOCUMENT_TOKEN_TO_BE_REPLACED

Welcome ghouls, beasts, tricksters, and every horrific being known to man. The spooky season is upon us and I figured I would indulge in the festivities in my own way. Thus, I have come up with a satirical take on … END_OF_DOCUMENT_TOKEN_TO_BE_REPLACED

Do so, and you’ll probably find that T END_OF_DOCUMENT_TOKEN_TO_BE_REPLACED

I remember when I played my first Resident Evil. It was a gift and couldn’t wait to get it running in my old PS1. That old Capcom “this game contains scenes of explicit violence and gore” plastered on the … END_OF_DOCUMENT_TOKEN_TO_BE_REPLACED

At the beginning of one mission, you are marked for dead by the organization you work for. Your handler has no idea what happened but informs you that they are coming for … END_OF_DOCUMENT_TOKEN_TO_BE_REPLACED

The history of gaming isn’t that old compared to other artistic and entertainment mediums. Many people have lived through the entirety of video game history, and more people have seen most of it. As such, you’d think that the … END_OF_DOCUMENT_TOKEN_TO_BE_REPLACED

(Updated 4/18/22) Even at a time when it feels like every game is being adapted into a show or movie, the news that Twisted Metal is being turned into a TV series stands out. Why? Well, it probably has … END_OF_DOCUMENT_TOKEN_TO_BE_REPLACED

(Updated 4/15/22) The reveal of the Mortal Kombat movie trailer and news that Street Fighter characters are joining the Fortnite roster has both legendary franchises on the minds of gamers everywhere. So, it’s only natural that fans have also … END_OF_DOCUMENT_TOKEN_TO_BE_REPLACED

While Super Smash Brothers for the Wii U and 3DS has been out for just over a year and the recent announcement of Cloud joining the roster garnering a massive amount of hype, many fans of the fighting game … END_OF_DOCUMENT_TOKEN_TO_BE_REPLACED

I’ll admit that I’ve never been a fan of visual novels. I have nothing against them; it just isn’t a genre I’m interested in. That said, MangaGamer’s announcement a while back that their upcoming Steam release of Kindred Spirits … END_OF_DOCUMENT_TOKEN_TO_BE_REPLACED

Black Shell Media is a multimedia marketing and PR studio specializing in distribution and publishing of indie games! We do a lot of marketing and work with websites, … END_OF_DOCUMENT_TOKEN_TO_BE_REPLACED

Snowfall is here and it is time to cheer! Sorry about that… As different video games pump out their holiday events, plenty get swept under the radar. If you are tired from playing the multiple FPS holiday events … END_OF_DOCUMENT_TOKEN_TO_BE_REPLACED

Amazon Prime members can get free games and free in-game content every month that last a certain amount of time. You can jump over to Amazon to sign-up for an account or navigate to the Prime Gaming section to see … END_OF_DOCUMENT_TOKEN_TO_BE_REPLACED