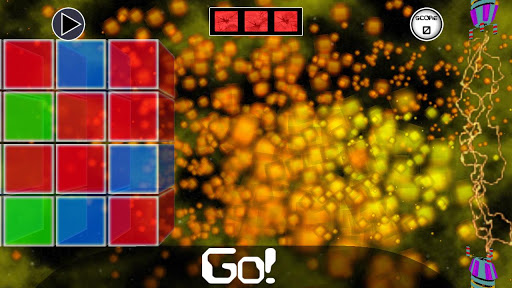 It can be difficult to create a compelling “match-three” game in this day and age, seeing as how there are so many different titles out there that rely on those mechanics. However, Chemical Cubes does an excellent job of crafting a frantic, well-paced experience that ties together well into the “match-three” genre.

The game is fairly straightforward upon initialization — you select your difficulty and commence with a playthrough. Once play begins, the cubes mentioned in the title align in continuous columns, scrolling from left to right. Depending on the difficulty chosen, you will either have 3, 4, or 5 rows of cubes in each column (3 being the easiest). The objective is to tap on a cube and move it to another cube’s location, with the end goal being that you create columns of the same color.
Combos can be acquired by creating successive columns with the same color, further multiplied by not receiving any “strikes” (which are caused by passing a column that has mixed colors). If you continue to succeed, two new colors will be added over time which exponentially increases the difficulty and truly tests your matching skills.
There are a few things that make Chemical Cubes unique within its mechanics: The first is that you can swap cubes regardless of where they are located on screen; The second is that, upon passing a column without matching colors, the game will slow down long enough to allow the user enough time to recover. If the player receives three “strikes,” the game ends and goes back to the main menu. 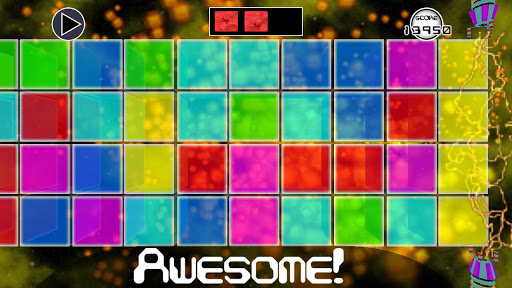 Upon completion of each playthrough, you are given a high-score, although you are only competing against yourself. Still, it is enjoyable to see how far you can get.
Chemical Cubes has a simple yet brazen art style, where background colors and particle effects run rampant behind the basic shapes and colors of gameplay objects. This allows the player to more readily understand the action on-screen and focus on moving cubes around efficiently. The design is well executed, although it would be nice to have some “juiciness” when creating combos outside of a text notification and multiplier number.

My favorite part of the game is how the frenetic background track pulses its techno-dub mix while you are busy matching. It contributes to the fun and wild atmosphere that the game creates for the player. The only issue I have with the track is that, well, it’s the only track in the game. At the very least, a different track for Easy, Medium, and Hard would have sufficed.

The game itself plays incredibly well and is simple enough for anyone to understand. However, if your phone has a smaller screen it could be difficult to play on Hard, as the precision required for moving cubes is more difficult to find given how small they become.

This title is great for a quick bit of messing around, if for nothing other than to give your brain a little rattle and listen to a perfectly ridiculous bass track. I would heartily recommend picking up Chemical Cubes and experiencing the cube-matching madness for yourself.

Snowfall is here and it is time to cheer! Sorry about that… As different video games pump out their holiday events, plenty get swept under the radar. If you are tired from playing the multiple FPS holiday events … END_OF_DOCUMENT_TOKEN_TO_BE_REPLACED

Welcome ghouls, beasts, tricksters, and every horrific being known to man. The spooky season is upon us and I figured I would indulge in the festivities in my own way. Thus, I have come up with a satirical take on … END_OF_DOCUMENT_TOKEN_TO_BE_REPLACED

Do so, and you’ll probably find that T END_OF_DOCUMENT_TOKEN_TO_BE_REPLACED

I remember when I played my first Resident Evil. It was a gift and couldn’t wait to get it running in my old PS1. That old Capcom “this game contains scenes of explicit violence and gore” plastered on the … END_OF_DOCUMENT_TOKEN_TO_BE_REPLACED

At the beginning of one mission, you are marked for dead by the organization you work for. Your handler has no idea what happened but informs you that they are coming for … END_OF_DOCUMENT_TOKEN_TO_BE_REPLACED

The history of gaming isn’t that old compared to other artistic and entertainment mediums. Many people have lived through the entirety of video game history, and more people have seen most of it. As such, you’d think that the … END_OF_DOCUMENT_TOKEN_TO_BE_REPLACED

(Updated 4/18/22) Even at a time when it feels like every game is being adapted into a show or movie, the news that Twisted Metal is being turned into a TV series stands out. Why? Well, it probably has … END_OF_DOCUMENT_TOKEN_TO_BE_REPLACED

(Updated 4/15/22) The reveal of the Mortal Kombat movie trailer and news that Street Fighter characters are joining the Fortnite roster has both legendary franchises on the minds of gamers everywhere. So, it’s only natural that fans have also … END_OF_DOCUMENT_TOKEN_TO_BE_REPLACED

While Super Smash Brothers for the Wii U and 3DS has been out for just over a year and the recent announcement of Cloud joining the roster garnering a massive amount of hype, many fans of the fighting game … END_OF_DOCUMENT_TOKEN_TO_BE_REPLACED

I’ll admit that I’ve never been a fan of visual novels. I have nothing against them; it just isn’t a genre I’m interested in. That said, MangaGamer’s announcement a while back that their upcoming Steam release of Kindred Spirits … END_OF_DOCUMENT_TOKEN_TO_BE_REPLACED

Black Shell Media is a multimedia marketing and PR studio specializing in distribution and publishing of indie games! We do a lot of marketing and work with websites, … END_OF_DOCUMENT_TOKEN_TO_BE_REPLACED

Snowfall is here and it is time to cheer! Sorry about that… As different video games pump out their holiday events, plenty get swept under the radar. If you are tired from playing the multiple FPS holiday events … END_OF_DOCUMENT_TOKEN_TO_BE_REPLACED

Amazon Prime members can get free games and free in-game content every month that last a certain amount of time. You can jump over to Amazon to sign-up for an account or navigate to the Prime Gaming section to see … END_OF_DOCUMENT_TOKEN_TO_BE_REPLACED